Back in June, I wrote about Birkenhead Park's new set of statues. At that point, they were still wrapped up in a protective tarpaulin, and a bit of a mystery, so I fired off e-mails to the artist and Merseytravel asking about them. Unfortunately, neither of them replied. Correction: Merseytravel sent an automated response thanking me for my query.

I managed to overcome this personal slight and blow to my fragile ego and instead took a stroll down to the Park to check it out. 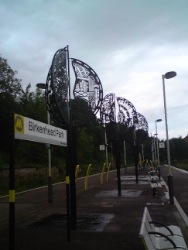 My first impressions were positive. You arrive at the platform at Birkenhead Park via a long, stepped ramp, and it was an impressive sight to emerge from the walkway and see the towering artworks. They draw your eye down the length of platform, and on the morning I visited, were attracting attention from the commuters. The three "trees" look organic, and fit in well with the tree-lined embankments. 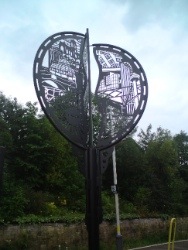 Each of the artworks consists of three wings decorated with a filigree of ironwork, delicate weaves forming images and shapes. What's good about them is the details, as they outline landmarks, people and events in the history of Merseyside - and beyond. In the first one, for example, you can see Sefton Park's conservatory, the Anglican Cathedral, and the Huskisson Memorial (Huskisson!). It's interesting to note that Liverpool's modern architecture is equally celebrated; the right hand "wing" shows the West Tower, the Herbert's "Bling" building in Liverpool One, and Richard Wilson's Turning the Place Over. The latter was only meant to be a temporary installation, but has proved so popular it still sits there rotating away today. It's nice to think of it being immortalised in this permanent way. 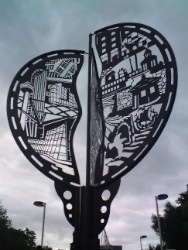 Superlambanana turns up on the third wing, alongside images from the docklands and the Albert Dock. 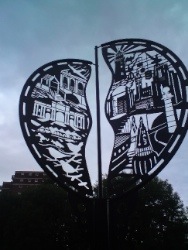 For the second tree, it's back to Birkenhead, commemorating the Park in the first instance. You can see the grand entrance to the park, above birds and frogs. The covered bridge over the lake is there too, and in the top right is an aeroplane, which seems to be coming out of nowhere. In fact, this is there to represent a Spitfire that crashed into the Park during the war. On the other side is the Birkenhead docks, with Leasowe lighthouse and, at the top, the "camel" of Cammel-Laird shipbuilders.

The third wing is probably my favourite of all of them; the design of the park radiates out, spreading across the river to Liverpool, and then on to New York to inspire the design of Central Park. It's the most unified of the designs, just one simple idea done well. 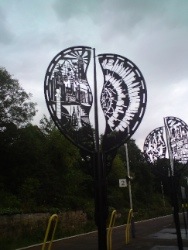 Last one, and the one that will probably get the least attention. Birkenhead Park's mostly served by three-car trains, so alighting passengers probably won't notice it in their rush for the exit. If the first piece was Liverpool, and the second was Birkenhead, then the third is both, and the links between them. Not only do we get the tunnel entrance (complete with the famous La Machine spider), but we also get a Merseyrail train, whizzing between the two towns. 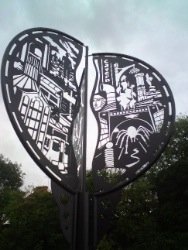 The Catholic cathedral also makes its appearance - because you can't have one cathedral without the other - with another couple of pieces of famous Merseyside artwork, Anthony Gormley's Another Place and Richard Huws' Piazza (a.k.a Bucket) Fountain from outside Beetham Plaza. And, yes, that is the sign for the Cavern. Deep sigh.

Just one wing left, and this one shows all the sporting activities that take place in the park. I think this is probably a polite way of acknowledging Liverpool, Everton and Tranmere without getting into any complicated arguments about why the Liverpool man is bigger than the Everton one, or why the Tranmere guy is above or below the other two. You know, important stuff like that. 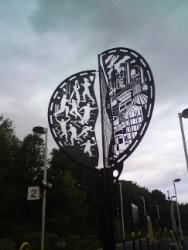 There are loads of images that I've missed, and that's part of the joy of the work; you can discover new things every time. Go check it out for yourself; take a picnic to the park and make a day of it.

I know I keep banging this drum, but I love that Merseytravel have made the effort and put up this artwork just for the enrichment of the passengers. That's my Council Tax well spent.

They look great. I hope they commision more (and different) art at the... shall we say... boring stations! :D It'd be a good way of getting more people off the train at places like Manor Road and Meols! The Stockholm Metro has art at every station (though some of it is debatable!), it'd be great if we could aim for something like this in the future. Imagine what they could do on the disused James Street platform?!

Absolutely right - it would be a great trail to follow. I'd have an Attractive Local Feature board at every station, even the ones where there doesn't seem to be anything of interest, and I'd have pieces of sculpture everywhere. The good thing is that Merseytravel has a Public Art Officer, a woman named Emma Lawrence, and she's doing a pretty good job. The Art on The Network competition will hopefully also produce something worth seeing. You could turn Merseyrail into a year round, permanent version of the Superlambanana hunt!

Though if you did that, every bugger would be trying to visit all the stations, and they'd steal my thunder ;-)