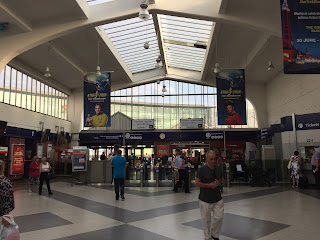 It's five years since I last went to Blackpool.  There are some towns and cities that, once I've visited for the station, I want to return to again and again.  Newcastle, for example, or Barrow.  Places that capture my imagination.

Blackpool is not one of those towns.  I've been to Blackpool twice in my life, and frankly, I'd have been happy to leave it at that.  It's just not my kind of town.  But then a Star Trek exhibition opened down on the front and, well, there it was: a third visit was needed.

Yes, I'm a Trekkie, though my love has been severely tested over the past few years.  It wobbled half way through Voyager, it collapsed entirely after about five episodes of Enterprise, and as for bloody Into Darkness - nope (or, in Klingon, ghobe').  The Next Generation and Deep Space Nine however - absolute brilliance, hours of thought provoking, exciting telly that I can immerse myself in.  DS9 in particular has a level of characterisation and intrigue that none of the other Trek shows can equal. 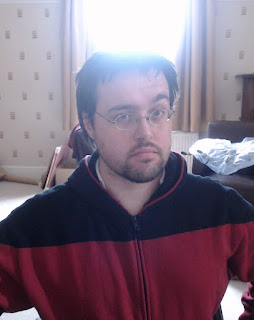 I headed to the exhibition with fellow Trek fans Robert and Barry; I decided not to wear my command red TNG hoodie, because I didn't want people to think I was a complete nerd.  (I wore a t-shirt with the logo of the Drax Enterprises Corporation from Moonraker instead, because that's much cooler).  The exhibition was ok - a lot of costumes and props mainly, probably sourced from a private collector.  There was a Tribble that moved on its satin cushion, and a Borg drone, and some bits of torpedo.  The odd PADD and tricorder.  A mock up of the Original Series bridge, which I couldn't get over enthused about because I really don't like the Original Series. 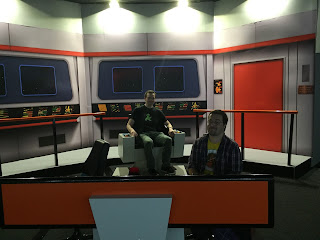 As you can see, Robert relished the opportunity to play Kirk.  Later that day he punched a man in a lizard suit in the face, ripped his shirt, and shagged a green skinned alien.

We headed out via the extremely expensive gift shop - I would dearly love to own a metal communicator pin, but I'm not paying forty three pounds for it - and continued the theme of "people who have hobbies you are encouraged to laugh at" by walking down to the front for a bit of tramspotting. 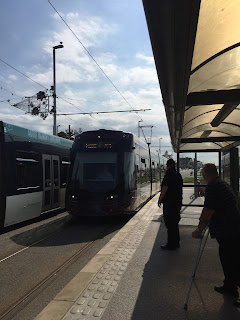 Blackpool was the only place in Britain to keep its trams; while other cities tore their networks up and converted them to bus routes, Blackpool kept the steel along the coast.  Admittedly, for most of the 20th century they were a tourist attraction.  In 2012 however, the old-fashioned network was upgraded to modern, low floor trams.  The heritage trams operate alongside the newer ones in tourist season, but otherwise, Blackpool has been gifted with a transport route other towns would kill for. 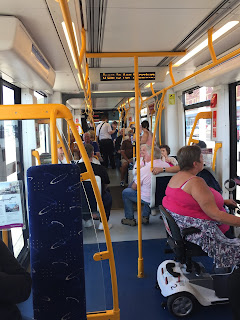 Fast, quiet, efficient trams ply the route from Starr Gate to Fleetwood, with a day pass costing only a fiver.  We got on board and followed the line north, under the illuminations, which looked a bit abandoned during the day.  It's a surprisingly long journey all the way out to the end of the line, passing hotels and seafront homes and through the town centres of Cleveleys and Fleetwood before ending up at Ferry terminus. 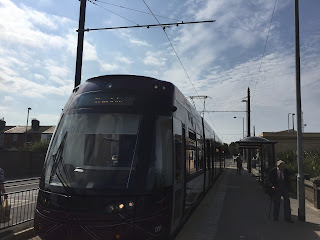 Pleasingly, the new trams have been a success.  There had been a lot of grumbling when the historic trams were replaced, but the new trams are superior by almost any criteria, and they seemed extremely well used.  Blackpool have recently finalised plans to extend the route to run to North station, which is an excellent idea.

On top of all this, as we travelled back to Tower stop, I realised that this trip meant I have travelled on every single tram network in the UK.  Manchester, Sheffield, Edinburgh, Croydon, Birmingham, Nottingham and now Blackpool to complete the set.  This pleases me immensely.

I am such a nerd. 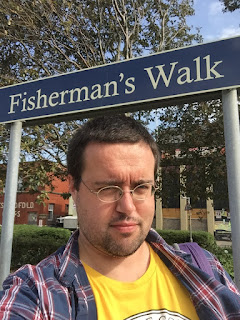 I would also be immensely pleased at having collected every tram network.

It's the small things.

That Barrow and not Blackpool entices you back says everything about you :P

Oh my gosh, you've only got a few left, haven't you? Then what are you going to do? Hang around Ilkeston waiting for that one to open? Whatever you do, thanks for many happy hours watching you tramp around places I will never see in person.