I last visited the city in 2013, arriving at Bradford Interchange and crossing the city to Bradford Forster Square.  I found a gorgeous mass of Victoriania, fine, proud buildings and a busy city centre.  I also found a big hole in the ground.  A load of buildings had been demolished for a new Westfield shopping centre but a lack of finances meant that nothing was built.  In 2013, they'd made it into a bit of a park, just to try and make the best of a bad situation. 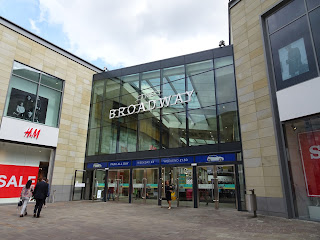 I mean, at least it's not a hole any more.  That's something, I suppose.  But that's the beginning and end of everything nice I can say about the Broadway shopping centre. 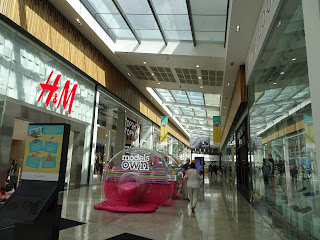 It's just a mall.  That's it.  It's just a shiny floor, glass roof, straight avenue mall.  It's a shopping centre that could have been built at any time in the last forty years; only the shops would change.  It's pedestrianised walkways with a roof on the top.  It's crap. 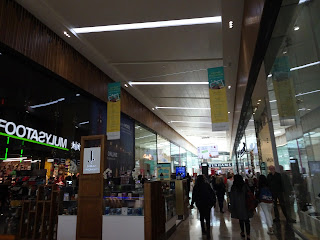 I thought we'd moved on from this, these shopping ghettos that close up swathes of our city centres and suck investment away.  Liverpool One manages to sew itself into the city and create a new district; it's open 24 hours, it's a thoroughfare.  It's interesting architecture too - different faces and styles to keep you interested.  Broadway's just a box.  They've plonked a box in the middle of Bradford city centre.  In the 21st century.  This is the view that Bradford Forster Square's two million passengers get as they enter the city centre: 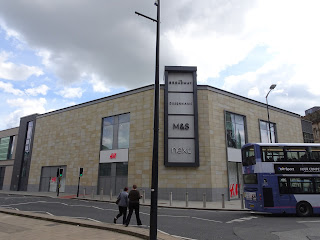 Beautiful, I'm sure you'll agree.  Outside, 1960s precincts were being demolished for a cinema and restaurants.  A Brutalist office block had acquired a plate glass ground floor ready for - I don't know, a Wetherspoons?  A Nandos?  A Hungry Horse?  Some kind of crappy chain  restaurant where the branches number into the hundreds. 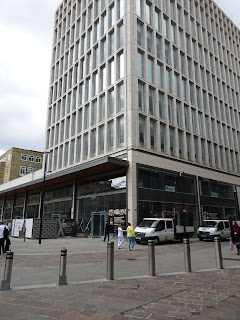 I don't blame Bradford's elders.  It's Leeds' little brother, cowering in its shadow, and over the past few decades the flow of money away from Bradford has just got stronger.  They were just happy that someone, anyone, wanted to spend money in their city.  It's just a shame they couldn't find someone who'd make it better, or had the bravery to fight the Westfield elites and get them to build something with a bit of spark and vigour.

My route to Interchange was still lined with those fine Victorian buildings, but they looked sadder now; there seemed to be a lot more empty storefronts.  A lot of big names moved from the traditional shopping centre into Broadway.  It sucks up the money and leaves the pleasant, walkable city centre a husk for pound shops and bookies. 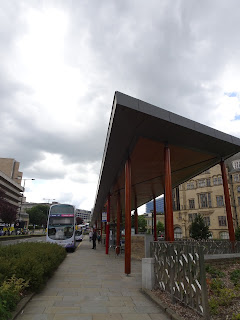 The City Park still impressed, particularly the long wing of a bus exchange on one side, and then there were the little tented roofs of Bradford Interchange and my train to New Pudsey. 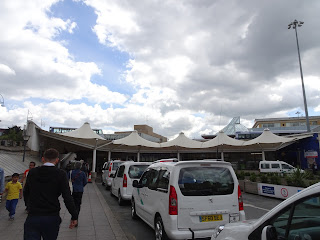 There is no such place as New Pudsey, by the way.  There's Pudsey, the place (and yes, that's where the Children In Need bear gets his name from: his creator was from the town).  The "new" part was purely because it was a new station, though since it opened in 1967, perhaps it's time to drop that part.  In fact, since it's a mile from Pudsey town centre, maybe it's time to rename the whole shebang.  (To further add to its showbiz credentials, New Pudsey station once appeared in Monty Python.  There's a close up of the sign and everything.) 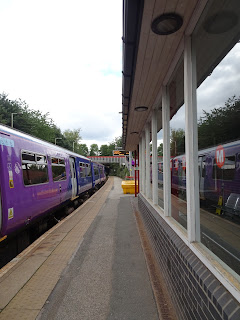 At platform level, New Pudsey's pretty standard - couple of platforms, some ramps, a shelter.  It's been done up since the Monty Python days.  Up top though, there was a real shock. 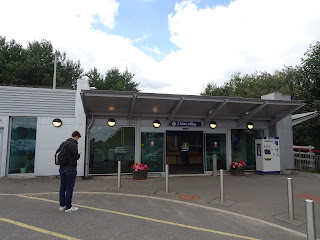 An actual ticket office.  Well, I never thought I'd see the like.  It's a new one too.  Which begs the question: why aren't there more manned stations in West Yorkshire?  Why weren't Kirkstall Forge and Apperley Bridge built with them?  I couldn't see anything special about New Pudsey.

The presence of a ticket hall - and even more, a man actually checking tickets - left me a little discombobulated.  The design of the station didn't help.  There was an expanse of car park, every space filled, but I couldn't quite see how to get out if you were a pedestrian.  Fortunately, I spotted a young mum and her excited toddler disappearing down a footpath which went in the direction I needed to go, so I followed her. 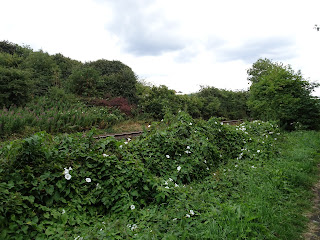 The path followed the railway line, descending beneath a tree-lined embankment, before rising up to drop me in the car park of an absolutely enormous Asda.  They're a local company, founded in Knottingley and with the HQ still in Leeds, and I wonder if that's meant the city planners have given them a bit of leeway in the planning department.  This was less a supermarket, more a small planet; if you were holed up in here during a Dawn of the Dead-style zombie rampage, you'd be quite happy for at least six months. 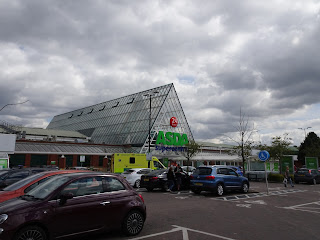 Cowering in the shadow of the Asda was a very Eighties-looking Marks and Spencer, which was handy, because I needed the loo, and if nothing else, M&S always have decent toilets.  I was mid-pee when it suddenly came to me.

I hadn't taken a sign picture at New Pudsey.

I'd been so busy trying to find a way out I hadn't thought to look for a sign.  Nine years I've been doing this blog.  Nine years, and I still forget one of its central tenets.  I am a fool and an imbecile.

I washed my hands and barreled out of the shop, back the way I came, past two girls whose see-through carrier bag exposed their only purchase from Asda to be a bottle of rose wine.  I huffed back the half a mile to New Pudsey station, and found the other exit round the back of the ticket office.  There was the station sign, a bit grubby, but essential. 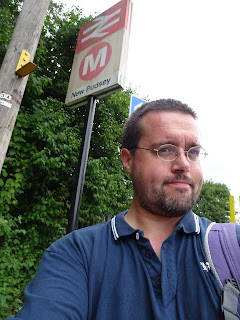 I didn't fancy hitting that footpath for a third time, so instead I crossed the tracks and headed for the Bradford Road.  In the process I may have missed some of the more charming parts of Pudsey, and for that, I apologise.  I walked along the traffic-choked road, past sandwich shops and wedding gown shops and anonymous industrial units and car dealerships.  It was grimy and gritty. 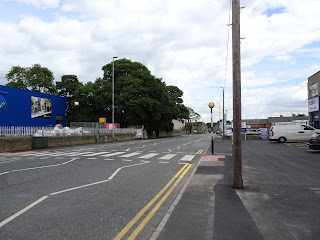 The most interesting part of the route was Leeds' own Cycle Superhighway, a separated off bike lane on both sides of the road.  It had been done properly too, with separate kerbs and those bus shelter bypasses that diamondgeezer is obsessed with. 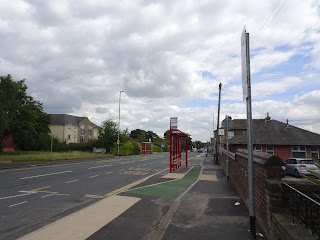 The only thing it was missing was cyclists.  I walked along two miles of the Cycle Superhighway, and I saw a single cyclist on it, right towards the end.  He wasn't wearing a helmet and he was about fifty, so I'm guessing he wasn't Leeds' version of Sir Chris Hoy.  Well done for trying though. 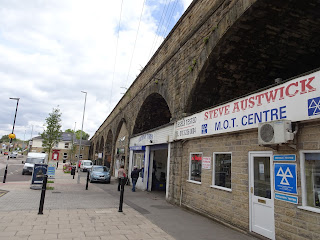 Past the railway arches, the industry got patchier, dodgier looking: dark and grime splattered.  Yards and hand painted arrows guiding you round the back of takeaways - the Pizza Palace, Mr Khans (yes I know there should be an apostrophe, I'm just reporting what I saw).  An Asian restaurant whose car park doubled as a hand car wash during the week, a banner dangling above the weeds: Mega Buffet - Biggest Buffet In Yorkshire.  The pictures alongside this ambitious claim may have been food - the sun had bleached them into indistinguishable orange slop in square troughs. 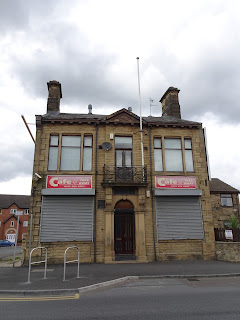 The Conservative Club was now a cafe, the local Tories presumably now meeting in a single booth in a Starbucks.  Not that the right wing didn't still have a toehold in the area - a scrap metal merchant flew a UKIP banner, still urging passers by to vote leave and "take our country back!".  I wondered how that was going for him, how the business of recycling iron had improved since June 24th.  The Pavillion Business Centre, meanwhile, was just depressing; a charming Art Deco cinema frontage wedged onto of a load of units, preserved but unloved. 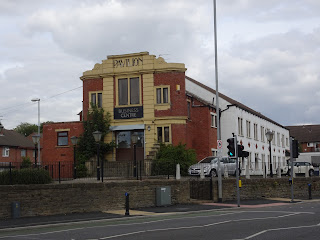 I caught a tantalising snatch of conversation as I walked past a bus stop - a neat Asian girl forcefully barking into her mobile, "she's a fucking bitch, she really is, and you KNOW why" (no, I don't, please tell me!) - then I took a detour by a fire station.  Sliced up cars were abandoned in the car park, the remnants of Jaws of Life practice sessions.

I'd spotted a name on Google Maps earlier, and, even though it was off my route, I just had to go there.  Look at it: 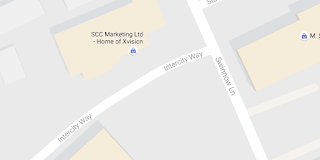 Intercity Way!  I imagined a road devoted to railway construction, dripping with history.  Perhaps a cabin from a 125 to herald the entrance.  What I actually found was a tedious industrial road and the entrance to a Bestway Cash and Carry.  There wasn't even a sign for me to gurn in front of. 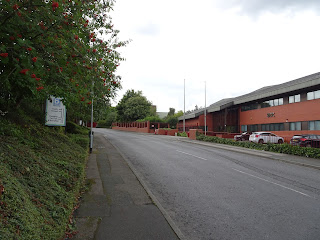 Disappointed, I went back to the main road, which had turned a lot more suburban.  There were homes and shops at the side of the road now, instead of abandoned warehouses and burnt out pubs, and the business units were anonymous offices and the odd antiques dealer flying a rainbow flag. 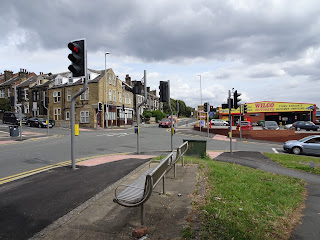 I'm not sure what it is about Bramley station, but I find it entirely forgettable.  I literally just had to zoom through the pictures then to remind myself what it was called.  It's not the station's fault, it's just anonymous.  Another couple of bland platforms with a sign that promises routes it can't fulfill: 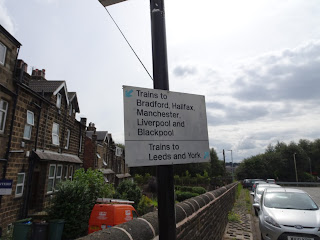 Good luck getting that train to Blackpool from there. 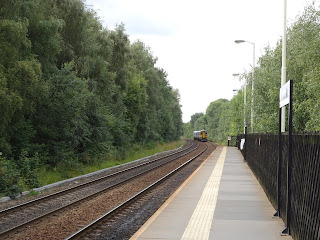 I really should have nicer things to say about Bramley because it was the last station in West Yorkshire I will ever visit.  It was the last time I'd be heading to the lovely Leeds station (as if the Gods knew to make my last trip there memorable, I saw Northern's Managing Director Alex Hynes while I was there - no, of course I didn't say hello, I'm far too shy.  Besides, what would I say?  "I really like your stations.  Have you got any freebies?").  It's another chapter of this blog closed. 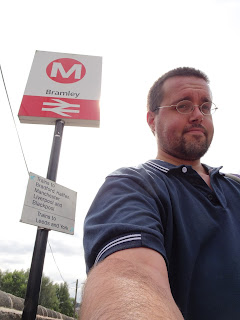 (Actually, no it isn't, because I just remembered Low Moor station is on the map and supposedly opening in the autumn.  So just ignore that last paragraph).
Posted by Scott Willison at 11:44

cycle superhighways - not all the same!

I grew up in Bramley, the station was a twenty minute walk over the hill from home. Do I miss the station now? No chance.

My mum used to work one Saturday a month which meant my dad had to look after me and my brother - his solution was a train journey somewhere. Anywhere! Once coming home from Blackpool somehow my dad wangled a cab ride, and the friendly driver even offered to stop at Bramley to let us off. So the last time a Blackpool train stopped in Bramley was.... 1989.

Is it not possible that the cinema was always only a grand frontage with what was essentially a shed behind as the picture- house/ auditorium? Often the way.

So 3 years later Bramley now has direct trains to Chester, but not to Blackpool. And it was also the last station that I visited in West Yorkshire, but nobody cares as I don't have a blog about it.