This is a broken country right now.  Brexit, the Labour Party - divisions are springing up everywhere.  We're split and bitter.

Fortunately there are still things that can unite us.  Disgust at Bake Off leaving the BBC, for example.  And, as I discovered at York station, sneering at Americans is still a favoured hobby.

As I stood on platform 5, an American tourist ran for her train across the tracks on platform 4.  She was straight out of Central Casting.  Generously built, with too tight clothes in too bright colours.  A baseball cap.  A bum bag - sorry, fanny pack - slung round her waist.  She ran as best as she could, but her size made her halting and slow.

She got there in time, staggering up to the doors.  I looked around me at my fellow passengers, all of us quietly, politely, waiting for our train.  There were pursed lips and raised eyebrows and judgmental faces.  Common.  Rude.  American.  We all became Maggie Smith in Downton Abbey.  We were awful, horrible, judgmental snobs, but we were together in our snobbery, as British people have been for centuries.  Kind of warms the cockles of your heart. 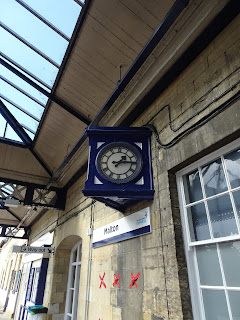 A return to the old ways was appropriate, because I was headed for Malton, an act of time travel in itself.  Despite getting there on a fast, modern TransPennine Express train, I may as well have turned up on a clattering steam train.  Beyond the station was a square lined with modern houses in an old-fashioned style - bay windows and pediments over the door.  The back entrance to Asda was been hidden by a wooden gate with a wrought iron arch over the top.  It was recognisably inauthentic, new pretending to be old, but its true purpose was as a primer, a way to get me used to old and new mixing together. 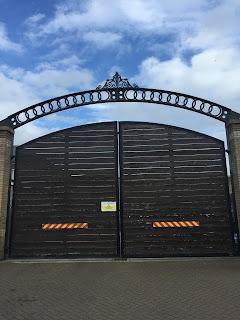 A little further and there was a bus exchange.  A long, sturdy brick building with stands along one side.  Simple, municipal architecture.  The corrugated iron doors were open as I passed; inside, a man in overalls lazily hosed down the concrete floor.  If Reg Varney had appeared, fresh from sexually harassing some young girl, he'd have slotted right in.  Into the scene, not into the young girl.  I don't want to imagine Reg Varney as a sexual being, never mind his weird conductor mate.

Beyond was the river, and that was the clever part of Malton's journey.  Rivers are eternal.  The Derwent has gone through this spot for millennia.  It could have been any time period as I looked over the side of the bridge.

It meant that when I rounded the next corner, and saw two lads on a horse and cart outside a stout hardware store (est. 1845), I was ready.  It wasn't a shock.  Malton was just going to be that kind of place: old and new all at the same time. 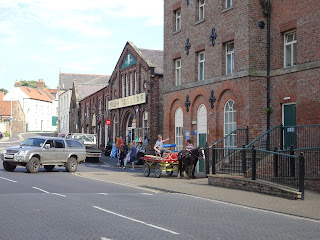 There's something reassuring about a hardware store.  In my head it was full of gruff middle aged men, their beer bellies concealed by brown aprons, ready to sniff dismissively at every customer request.  You'd ask for a light bulb; they'd return from the store room - because there won't be anything resembling a light bulb on display - with a box covered in dust that will have an exact copy of the bulb you've just brought in.  While you're there, he'll quiz you about the state of the washers in your tap, and you'd end up leaving with your arms full of grommits and whatsits.

It is, in short, my absolute worst nightmare of a shopping experience, and I would head for the corporate blandness of B&Q every time, but I like that it's there.  It's a bit of retail past that's still stored in aspic, and I like that. 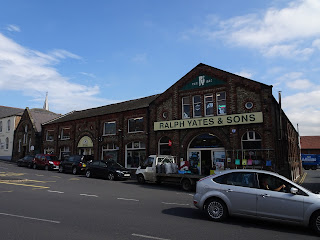 I followed the road round onto the main shopping street, where the familiars - WH Smith and Costa - were mixed in with smaller, local shops, and the Yorkshire chains.  There was a Yorkshire Trading Company - a kind of white rose Home Bargains - a Cooplands bakery, and. on the corner, a branch of Boyes, its logo absolutely refusing to cave into modern ideas about "style" and "corporate identity".  I imagined Mr Boyes, the gruff Yorkshireman who heads the company, pulling a cigar out of his mouth and barking at his marketing people.  "It's got me bloody name on it - what more do they want?" 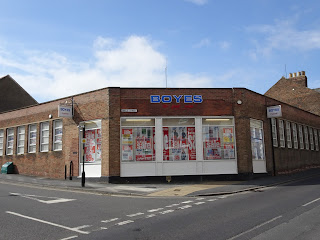 In the town's Market Place, though, the time travel was complete.  While Thirsk's market square had been a wide echoing space, Malton's was broken, interrupted by sloping hills, the church, the town hall.  It clattered into place like you imagined a Medieval town would, a bit sloppy, but incredibly charming. 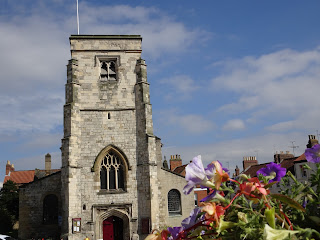 I circled the Market Place with a big stupid smile.  It was how an English country town should be - quiet and intriguing.  Busy shops and restaurants - a greengrocer, his fruit spilling onto the pavement, a butcher (This week's special: 3 Brace Pheasants), pubs.  Alleyways and side streets to tempt you as you passed. 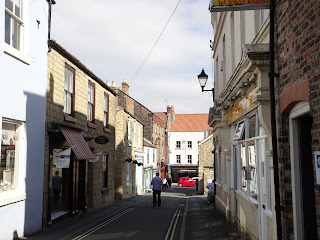 If a woman in a hooped skirt had clattered out of an entry I doubt I would have batted an eyelid.  Passing cars were momentary intrusions before you slipped back into the past.  It was undeniably well off - there was more than one interior design store, the Farrow & Ball logo prominently displayed - but not ostentatious.  It wasn't vulgar with its money. 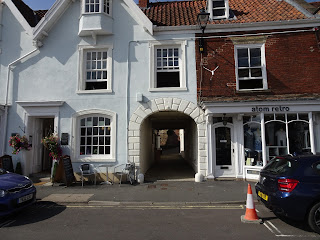 I looped round the Market Place two or three times, no doubt to the consternation of the pavement diners who probably thought I was a homeless person.  I was just enjoying drinking it in.  Malton has, in recent years, tried to reposition itself as a foodie destination, and certainly you couldn't move for cafes.  I'd just missed a food festival, a fact I learned when I passed Butterbees (Britain's only butter boutique) and saw that it was closed "because the food festival cleared us out!".

Yes, you read that right: Britain's only butter boutique. 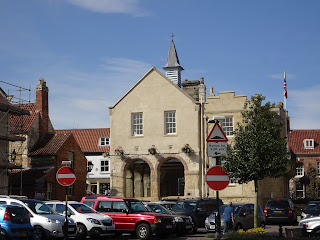 Finally I found a place for a cup of tea and a moment to relax.  All that smiling was straining my face - I'm not used to it. 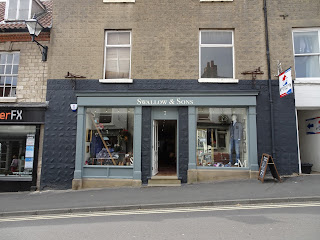 It wasn't all great, of course.  There was a fair few empty shops, gappy teeth in the town's smile.  The headline on the York Press was "Grandad Pointed Machine Gun At Driver".  And the residents of the district voted to leave the EU.  Even the past is imperfect. 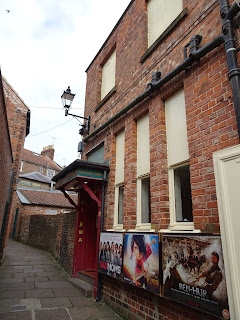 I left the Market Place via a back street so I could take a look at the Palace Cinema.  Its ground floor had been converted into a kind of upscale flea market, but the upstairs still showed films.  The red doors ushered you up a staircase to a showing of Ben-Hur, as it probably had done in 1959, and maybe in 1925 before that. 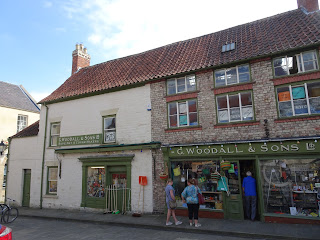 It was time to head back to the station, for a return to the modern world.  The front of Malton station looks impressive, a long Victorian edifice, but it's been filleted, the sides handed over to other, non-railway businesses.  It's a let down. 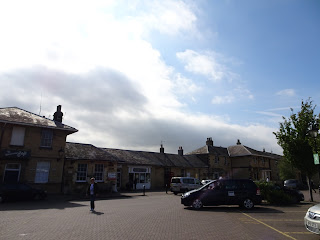 Inside, there's just one platform, taking trains to Liverpool in one direction and Scarborough in the other.  I'm sure there are long, tedious, extremely valid operational reasons for reducing a station down to one platform, but it always frustrates me.  People are easily confused.  Give us one eastbound and one westbound.  Keep the trains separate. 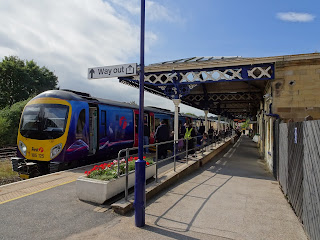 I could have got a train all the way home, right back to Lime Street.  I didn't though.  I had one more stop to make, at York.  This was the last time I'd be travelling this way for the blog, and I wanted to take one last look at its magnificence.  To revel in the cathedral of the rails.

Ok, that's a lie.  I wanted a pint of beer in the York Tap, the absolutely wonderful pub on the platform. 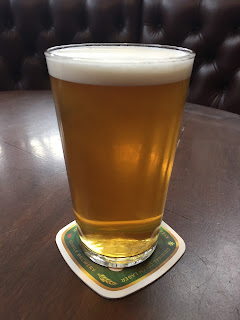 Time travelling takes a lot out of you. 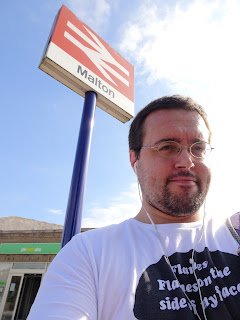 I misread this line: 'This was the last time I'd be travelling this way for the blog', didn't catch the 'this way' bit and really my heart really sank. Always enjoy your funny, wise and self-aware take on the world

How long have you been in Liverpool(ish)? You should know by now its Home and Bargain!!!

I call it Home and Bargain, obviously. But I thought if I put that some pedantic bastard would pop up in the comments to correct me. Turns out I was half right.