All In The Head

If there has been one constant through the nine years of this blog, it's been my never ending love for smut.

If there has been a second constant through the nine years of this blog, it's been the ups and downs of my mental health.

Starting out as a relatively sane individual (as sane as you can be for a person who visits railway stations as a hobby) I gradually descended into a depressive, mentally unstable mess.  Then, quietly and slowly, I climbed back up to my current state of mind: fractured, prone to breakage, but back to something resembling human.  I get through the days pretty fine now, a change from the multiple breakdowns I'd endure a couple of years ago.  The worst of the depression is gone.  But there's still the anxiety.

Anxiety is a tightness round your brain.  It's a tiny voice at the back of your head that undermines you and wrecks you.  Anxiety looks at a given situation and examines all the ways it could go wrong, then whispers it in your ear.  "A night at the theatre?  Think of the crowds.  Think of the people everywhere.  Think of the tiny seats and noisy streets, the queuing, the noise.  And what if it goes wrong?  What if you miss the start?  What if you've got the wrong night?  Are your palms sweating yet?"

Monday started out fine.  A trip across country to York on TransPennine Express - first class of course, because that extra tenner is worth it for the space and the coffee and the calm.  We were on time.  We cruised into the platform with fifteen minutes until my train out again - plenty of time for me to nip up and over the bridge for a quick pee.  Then back for a different TransPennine Express train, this time headed towards Middlesbrough.

I settled into my seat for the fifteen minute journey to Thirsk, dropping my ticket onto the table in front of me while the guard went through his spiel.  He fancied himself as a comedian, this one, listing the "delightful" Thirsk and the "beautiful" Northallerton, before arriving in "Boro".  As he told us he was about to embark on a ticket check - "because I get lonely at the back of the train all on my own" - I noticed something written in tiny letters on my ticket. 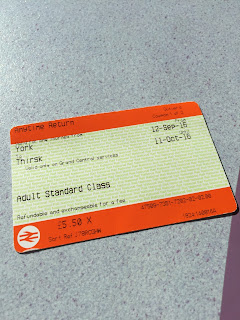 Valid only on Grand Central services.

Prickling tension.  A surge of panicked adrenaline bouncing off every surface on the inside of my skull.  A sudden dryness in my throat.  Horror.

You might think this was just a small matter.  A quick word with the guard and that was fine.  "I didn't realise when I bought it, sorry."  In the real world, it turned out to be a complete non-issue.  The guard stamped my ticket, wandered back to his eyrie at the end of the train.  Didn't mention it at all.  (Thank goodness for those terribly designed new tickets, with their miniscule type).

In the fantastical landscape of my psyche, though, the damage was done.  My brain was fizzing.  The tension of watching him walk down the train, perhaps about to tell me I was wrong, I was mistaken, I was breaking the rules.  The knowledge that I had a return ticket, one that was equally invalid on the train I planned getting back to York.  Knowing that I had to either risk the guard missing the small print again, or I had to buy a new ticket.  Anxiety grabbed hold of my mind and squeezed it in its tight, nasty little hand.

You're sitting there thinking how over the top all this is, and yes, writing it down, it sounds horribly melodramatic.  A few calm thoughts and I might have been fine.  Perhaps I should take up colouring books; I hear they're good for the nerves.  But all that presumes I can tell my brain what to do, when it's actually my brain causing the problem.  It's like trying to put out a housefire using the hose inside the house. 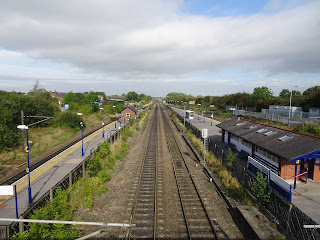 I staggered off the train, behind a retired lady who was looking for Pokemon on her smartphone (it's a miserable state of affairs when people old enough to be your mother are more up on pop-culture trends then you are) and had a bit of a rest on the platform.  A few deep breaths.  A drink of water.  Then I clambered up and over the footbridge.  Thirsk is a kind of layby on the East Coast Main Line, its two platforms off to the side of the fast route.  A red and silver Virgin burned through as I went down the steps to leave the station. 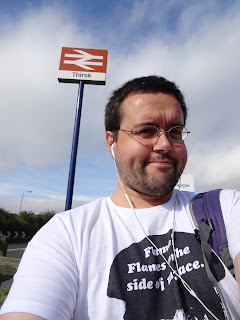 The station is way out of town; if you were being geographically accurate it should be called Carlton Miniott, but that sounds like a character from a lesser Graham Greene so Thirsk it is.  Between the station and the town centre is a mile and a half of long straight road, past the empty Austin Reed HQ, abandoned since the company went into administration earlier this year.  A handwritten banner said NOW CLOSED, the felt tip running out mid-phrase, so only NOW CL had been coloured in.  Next to it was an industrial estate called Europark.  Rumours that it is to be renamed Winston Churchill HM The Queen White Cliffs Of Dover Blue Passport Park post-Brexit are entirely false (but only just). 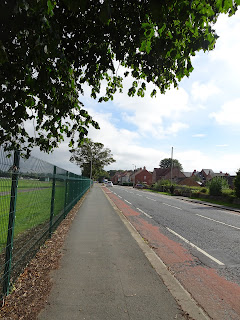 The main landmark on that long, dull road was the racecourse.  On the social scale of racecourses I've encountered over the years, Thirsk seemed to be at the grubbier end, a bit more workaday than the grand enclosures of Aintree or the scenic location of Chester.  Its grandstand was in an uninspiring brick building that looked like a converted warehouse; parking was on a field across the way, currently used as grazing for a handful of sheep.  It was the kind of racecourse that bookies care about more than the general public. 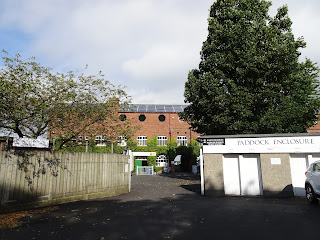 I negotiated a mini-roundabout between a Lidl and a Tesco, cars spinning in and out of both supermarkets too fast to let you cross without a spurt and a wiggle, and headed into the town centre.  The road kinked past an arts centre and a cinema, the Ritz.  In a world of multiplexes and THX surround sound, the Ritz was proudly flying the flag for old-school cinemas, showing a film (Jason Bourne) on its single screen that had already been out in the rest of the country for about six weeks.  I've sort of stopped going to the pictures these days.  The anxiety kicks in again and again, convincing me that the screening will be full of yammering teenagers chucking popcorn and antisocial idiots texting on brightly lit smartphones.  It takes a Bond film to get me to the flicks these days; even my mental illnesses can't win against 007.  But I imagine the Ritz would be more my scene, too unglamorous for the teens, too old fashioned for the blockbuster crowd; just me and a half dozen pensioners watching something that everyone else torrented the day it came out. 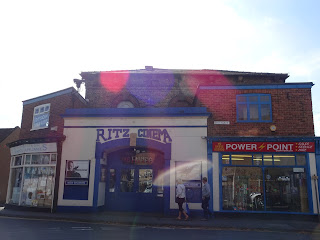 No, the Ritz isn't under attack from aliens there; it was a very sunny day.

I passed a butcher's shop with a chalkboard advertising its Olympic sausage (so called because it was "full of Brazilian flavours", apparently, and nothing to do with tight running shorts) and entered Thirsk's medieval market square. 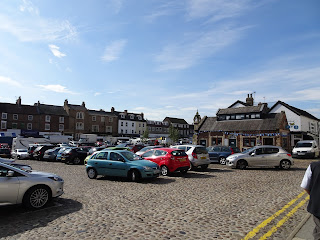 A wide expanse of cobbles and old fashioned shops utterly ruined by cars.  It could have been an impressive space - probably is on market day, when there are coloured stalls taking up all that space.  On a Monday morning though, it was just a car park.  A badly managed one, too, the side streets hurling automobiles into the mix at random to swirl and spin in the aisles.  There was a peppering of irritated horns under the growl of gunning engines. 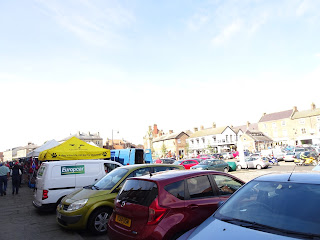 The pavements weren't much better.  They were crammed with the elderly and the dawdling, tourists pointing at blue plaques ("apparently Wordsworth stayed in this Wetherspoons"), shoppers stopping dead to stare through shop windows.  People in my way.  My anxiety cramped mind couldn't bear it.  Too many bodies, too many noises, too much hectic.  It was a small country town but in my head it felt like Piccadilly Circus.  I ducked into a bookshop, hoping for a bit of quiet contemplation in the aisles, but it was a kind of bookshop/cafe hybrid, with the cafe part winning handsomely.  Clattering crockery and squeaky chairs and hissing steam and every table filled, the books relegated to the edge of the shop.

I headed back outside, crossing the road by the Hung Moey takeaway (see, always in search of the smut) and following the pavement round.  Hemmed in between shop fronts and a chain of small stalls selling garden statues and house signs.  Before I knew it I was back at the entrance to the market square, where I'd come in, and I took it as a sign and headed back to the station. 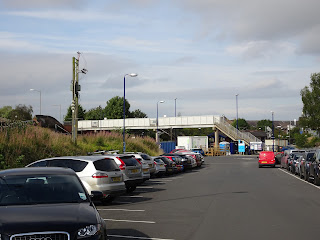 Sometimes, when it all gets too much for me, when I need a break, the best place for me to be is on a railway platform.  I sat on a bench for twenty minutes, letting the breath hiss between my teeth, calming myself down.  Anxiety quietly receding.  The healing power of stations.

(And yes, of course I bought a brand new ticket for the trip back to York to replace the Grand Central Only one.  It was the sane thing to do).
Posted by Scott Willison at 15:45

My first ever public panic attack was in Thirsk. Me and some friends were out drinking there - I was 16, maybe 17 - and after about 3 pubs, with plans to go the town's only (and very grotty) nightclub, suddenly something evil and cold gripped my heart. I was terrified. I couldn't breathe. I didn't know what to do. My friend Lucy bunged me into our friend Leonora's car and order her to drive back to my house immediately. She held my hand the entire time.

I recovered and we continued drinking in Northallerton. It wasn't until literally 20 years later that I worked out what had happened - a panic attack.

To this day I still feel embarrassed about the whole affair.

I am with you entirely on the panic attack about tickets. So been there.

I haven't been here http://www.worldofjamesherriot.com/
But can't believe you missed the only thing Thirsk is renowned for!