Trains To All Destinations

I'd always felt a bit guilty about Crewe railway station.  I hadn't given it the attention it deserved.  I collected it way back in September 2007, back when the purpose of this blog was just to visit the Northern and Wirral lines on Merseyrail.  (Insert sound of hollow laughter here).  I was passing through Crewe on the way to a work's training thing in Manchester and I thought, "wouldn't it be hilarious if I took my picture in front of the Crewe sign?"

So I marked my territory but that was it; I didn't give this icon of rail history the attention it deserved.  It is an icon.  Crewe is a magic name among passengers.  It's the gateway to the North for many.  There are thousands of displaced Northerners heading home to Manchester and Liverpool and Preston for Christmas who see the sign at Crewe and smile - "nearly home".  It's got almost totemic status. 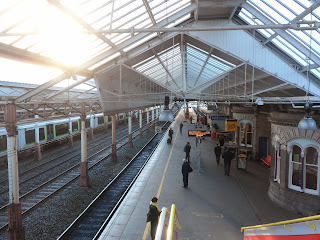 The reason for its significance is its location.  Crewe station was built over the top of a junction.  It's the point where the line from London to the north is joined by four other lines, forming a six-pointed asterisk that's still clearly visible today.


The station lies on the shared part of track between the six branches, making Crewe the place to change trains for millions of passengers from all points of the country.  Trains to and from London, Birmingham, Glasgow, Manchester, Liverpool - they all passed through here.

When it was built, however, Crewe station was serving no-one except transferring passengers.  This was simply a load of Cheshire countryside in the mid 1800s - even the name, Crewe, was simply picked because the land was bought off the Earl of the same name.  There wasn't actually a town called Crewe.  That came much later, when the railway works at Edge Hill in Liverpool were transferred here and a town was built for the workers.  The new town took its name from the station, which is why the centre is a mile away from its most famous feature. 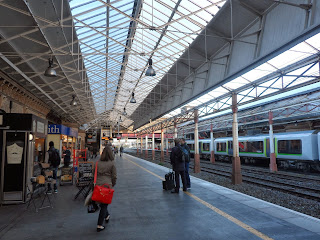 The sad part is that dislocation between town and station has resulted in a less than perfect building.  Most boroughs took an interest and a pride in their principal railway entrance.  Cities and railway companies competed to have the grandest, most majestic way into their civic centre.  Crewe station was sort of cobbled together.  New platforms were built as and when needed.  The entrance was via a little building on a road bridge.  Few people came to Crewe (the station) to visit Crewe (the town); they mostly stayed down in the station area, so the local authorities didn't really concern themselves with it. 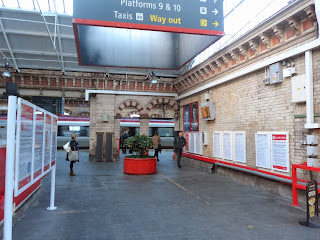 Today, Crewe is shabby and unloved.  It was voted one of the worst stations in Britain, and Network Rail even proposed demolishing it and building a brand new one somewhere else.  Electrification and technology mean that trains can run faster for longer, so they don't need to stop here any more; the "hub" stations have also shifted, to places like Leeds and Birmingham, places that - to put it bluntly - people actually want to visit. 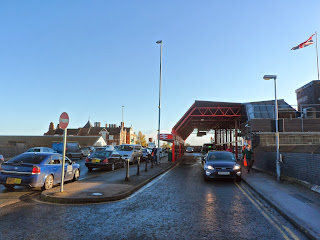 British Rail took some of the platforms out of commission in the eighties, and it feels like the station's still stuck there, for all the grey and red Virgin branding.  It's when the new ticket office was built on the road bridge - all red steel and smoked glass, and horribly impractical; there's nowhere for buses to stop outside, hardly any drop off spaces, and a constant stream of traffic blocking the way. While other major stations feel more like shopping malls with a few trains attached, Crewe can still only offer up WH Smith, Upper Crust and a dismal pub.  The captive market - bored people with half an hour to kill between trains - are completely untapped. 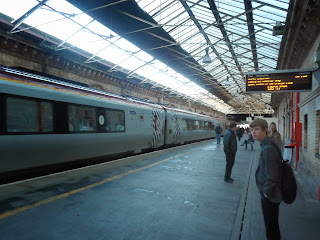 Things have improved slightly.  After their plans to relocate the station were rejected Network Rail and Virgin (who manage the station) fixed the roof and did a bit of a repaint.  A first class lounge was built on the overbridge, and a couple of little coffee kiosks opened.  Meanwhile, Cheshire East Council have started building a new entrance on the site of the old Royal Mail depot.  The new entrance will feed straight into a refurbished underpass, and will have parking and a relocated taxi rank outside.  Tiny steps, but it's something. 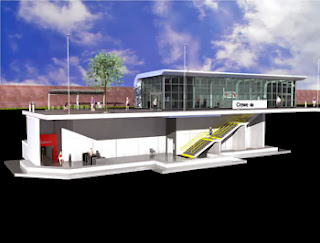 Sadly I think Crewe's glory days are gone.  It'll always have a place in the nation's affections - there was much wailing when Virgin changed its service from Liverpool so that trains no longer stopped here - but it's no longer the centre of a railway universe.  Perhaps HS2 will give it a boost. 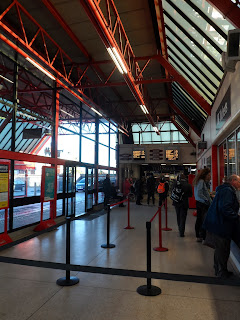 I wandered around to platform 12 to create a companion piece to my 2007 shot.  Much like the station, we've both aged, and our best days are behind us.  Maybe I should ask Cheshire East to give me a refurb while they're at it. 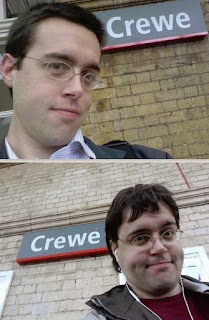 Email ThisBlogThis!Share to TwitterShare to FacebookShare to Pinterest
Labels: Crewe

You'll be thrilled to learn that Crewe is reinstated as a stop on Virgin's Liverpool-London trains from the December timetable change.

I should point out that, by moving the taxi rank to the lower entrance, buses will then have their own area at the top entrance, separate to the current bus area which everyone uses as pick up/drop off as well. I'm sure all this will be fantastic and complete by the time I move to Altrincham next year and have no use for it except when visiting family.