Fair warning: there's nothing about trains in this entry.  In fact, there's not much to do with the blog in it at all.  I'll be back to normal with the next entry. 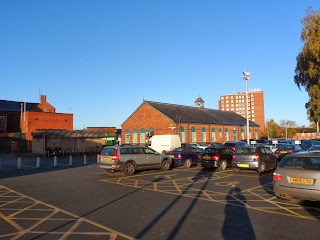 Blaming Crewe for my mental collapse is cruel and unnecessary and not even true; in retrospect, I realise that I'd been showing signs of depression before I ever started working there.  It's just that working in Crewe coincided with the worst period of my life, ever, and it's hard to break free from those feelings even when you haven't been back for years.

I left the station and walked into town in a deliberate attempt to exorcise some of my demons.  I deliberately took the route to my office I always did, walked the same way and at the same speed, so that I could both spot the changes and lay some of the ghosts to rest.

Five years ago I started work at what was then Crewe and Nantwich Borough Council.  I'd worked at Chester City Council before then, and I'd reached the stage where I'd pretty much done everything I was ever going to do, while above me were a couple of managers who showed no sign of leaving and letting me take over their job.  An opportunity came up at Crewe, and I took it; the money was only a little better, and would be cancelled out by the additional travel costs, but it was more responsibility and a different challenge. 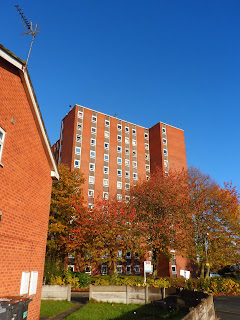 Each morning I took the London Midland train to Crewe, crossed the busy road outside, and headed through the backstreets to get to my office in town.  I'd passed my driving test not long before, and I had my own car, but it just didn't appeal.  I drove a few times and found it boring and over stressful.  Why would I do that when I could sit on a train, listening to music and reading a book?

In 2013, little had changed.  The British Transport Police had gained a cycle rack in their car park, and the signage for the station car park was a bit clearer.  The house on the corner had lost its enormous satellite dish, replaced with a standard Sky one.  I remembered ducking through the car parks, learning of little short cuts as time went on, as I passed the block of flats and headed for a little back alley. 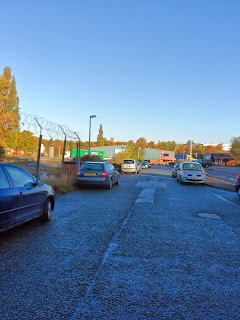 They still haven't built on what used to be a supermarket.  Elsewhere, former Kwik Saves were turned into Co-ops and Lidls; in Crewe, they levelled it and left the concrete base to fester.  I used to cut across there, but on icy cold days it was lethal, and now I'm older and more cowardly I didn't risk it and wandered down the main road by Wickes.

I began to feel the familiar tightness in my throat and eyes.  This was usually where The Fear would set in.  There's a little patch of green here, and I remembered, so clearly, crossing it day after day in floods of tears.  Stopping in the middle of the grass just to cry.  Unable to walk or even move because every muscle in me seemed filled with despair. 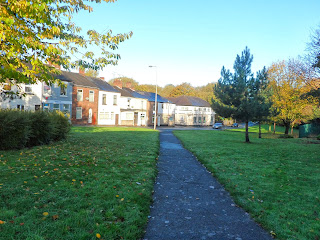 People often think that depression is about feeling "sad" all the time.  Like you wake in the morning feeling miserable and it never gets better.  For me, it was more about feeling nothing.  I had a hole at the centre of me that didn't care about anything.  Joy, misery, hatred - they were emotions that I couldn't grasp.  And now and then my body, for some reason, just went mad and made me cry, like it was trying to do ALL the emotions at once and didn't know how to process them, and then I felt worse than I'd ever felt or ever would feel.

The cane furniture shop on the corner had gone, finally; the signs were still there but the shop was empty.  I passed under the Chester line, where the road dipped down and filled with water (avoid between autumn and spring as lorry drivers thought it was hilarious to try and splash you) and crossed the bypass to the misleadingly-titled High Street. 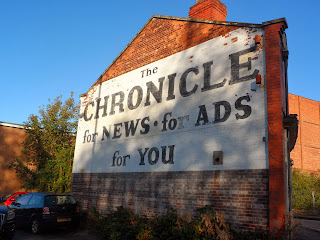 It's a strip of vacant offices, abandoned cinemas and closed takeaways.  There's a nightclub, which may or may not have been open - it was hard to tell - and Manhattans, "Crewe's Gentleman's Club" was still there.  They'd taken down the signs advertising the on-site jacuzzi.  Every time I saw it I felt nauseated, imagining the petri dish of bodily fluids that must have swilled around amongst the bored Eastern European hookers and overweight businessmen. 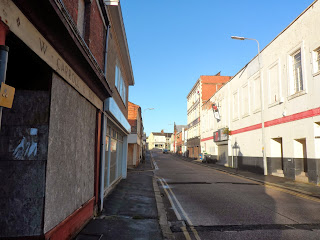 This was usually the point where I'd try to gather myself together for another day at work.  Take a deep breath and wipe my face and blow my nose.  Steel myself.

The job had turned out to be terrible, you see.  I was on the sixth floor of a manky office block among a bunch of people who were either counting their days until they could take early retirement or redundancy, or simply didn't care.  My "extra responsibilities" seemed to be all the jobs everyone else hated; my immediate supervisor was clearly resentful of me, and thought I was after her job, but she parlayed that fear into passive agressive sniping at me rather than, you know, being any good at what she was doing.  There was one girl there, Emma, who was brilliant, and lovely, and who was a rare ray of intelligence and humour, but she was just as put upon and was too nice to say no. 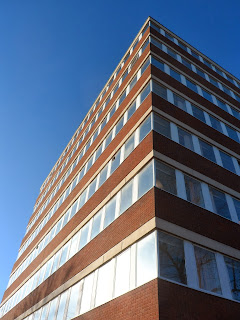 I was on a desk at the back of the office, by the paper files they refused to get rid of "just in case" and the carbon paper, which they actually used.  In the twenty first century, they were using carbon paper, and no-one thought it was unusual.  There wasn't any air conditioning. and nobody opened the windows because we were on the sixth floor and so it might get a bit breezy.  It got a bit sunny as well, so they closed all the blinds too, leaving us in a hot, artificially lit square.  One day I caught a glimpse of Jodrell Bank in the distance through a gap in the blinds, and I expressed surprise and delight; the reaction in the rest of the office was 50% "so?" and 50% "what's Jodrell Bank?".

You needed to pick up a key on a bit of wood to use the loo, which was embarrassing at first, but soon became my saviour.  I'd disappear into the cubicle and sob and wail.  I'd lean my head against the rough woodchip, because the pain of its raw surface against my skull was a welcome distraction from the hole inside me.  I had other distraction techniques too, that I'd employ throughout the day - biting my lip until it bled, ramming my fingernails into the palm of my hand until they left tiny purple crescents behind.  Sometimes I'd stand on the staircase landing and look at the window and fantasise about just ramming my head through the glass.  One good crack, I thought, one strong hit, and I'd go straight through and out the window and hit the ground below and that'd be it.  All done.

Then I'd think of the poor person who'd find me, and the policemen and ambulance men who'd have to scrape up my pummeled remains, and I'd go back to my desk for a bit longer. 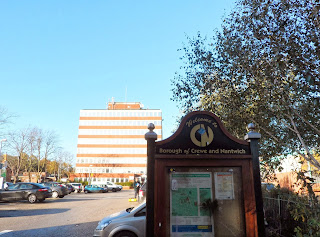 Sometimes, as a treat, I'd buy myself a latte from Costa or a McDonald's breakfast on the way in.  My colleagues treated this indulgence with puzzlement - "but we've got a kettle here?".  I would just find a refuge in the bacon McMuffin or the hot chocolate with marshmallows served by a cheery barista with holes in his ears. 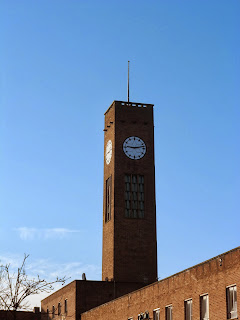 Crewe isn't a pretty town centre.  It's got some nice 1950s buildings which are sadly a bit worse for wear, and it shows the effects of the recession worse than most.  A big Asda misdirects the foot traffic, and the BHS must be one of the most depressing department stores in the world - three entrances but really, no way out.  I used to go to M&S for my lunchtime sandwich then wander slowly back to my desk to eat it - there was nowhere you'd really want to loiter. 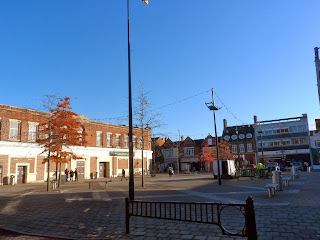 One day, finally, it all got too much for me.  I woke up in the morning and I couldn't leave the house.  I cried and sobbed and crouched in a corner, unable to move, terrified of nothing and everything, filled with self-loathing and scared.  The BF - who, I should say, did his very best to support me through all of this, and has done ever since - held me and phoned in sick on my behalf.  And that was it.  I never went back.  After a few months of sick leave, an opportunity for redundancy came up, and I took it.

This was the first time I'd been back to Crewe town centre since then.  I was surprised by how well I'd coped.  I'm a lot better these days - the bad times are a rare occurrence now, rather than the daily hell they used to be - and so the places where I'd been bad were sepia toned and fractured.  They were a film that had been made in the same location, but now I was seeing without the dramatic Hollywood lighting and special effects. 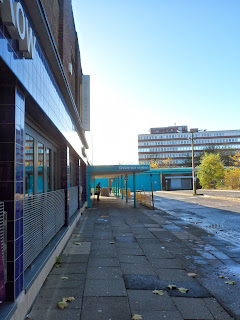 I went to the bus station.  Even by the low standards of municipal transport hubs, it's a shit hole.  Just horrible.  Painted in Arriva turquoise, with no facilities, little information, and cold wooden benches to sit on.  There was talk of it being redeveloped at some point, but of course it never happened. 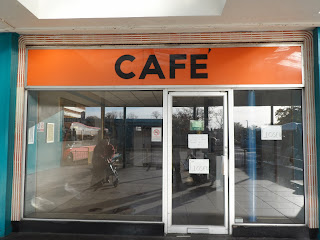 I'm glad I went back to Crewe and closed the book.  I'm equally glad I'll never have to go back again. 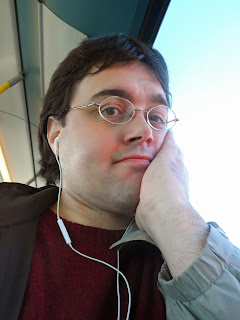 Email ThisBlogThis!Share to TwitterShare to FacebookShare to Pinterest
Labels: Crewe, odds and sods, The BF

For quite some time, I thought Crewe was fine. That it had everything I needed. Then I moved to Wolverhampton for a year and experienced living in a city (and somewhere with a proper transport authority). I moved back to Crewe for various reasons and I can't wait to leave again. It's very a much an "if you've experienced better, it's awful" town. Everything is "just enough to get by" and that frustrates me now.

My current job has gone 'Crewe'. Unfortunately Liverpool One taken away the only park so will have to save my outpouring of emotions till I get home.

This is why blogging is important.
This.

@The Shillito: I had a similar experience with Luton - I loved it until I moved away and realised how crappy it was. It's why I think everyone should go away at least once in their life - to work, or for uni, or something. Go to another place to see what you're missing.

Your story sounds somewhat familiar. I was bullied when I worked in a female-dominated primary school best part of a decade ago back now. It totally ruined me and put me out of action for a good number of years.

It gets better over time but the road to recovery is a long one.

Keep up the good work.