Just the name annoys me.  A whole month of people wandering around with ratty caterpillars crawling across their top lip.  Unless you're Beast Man from Masters of the Universe, a moustache rarely looks good until about three weeks of growth.  Up until the 21st of November, it's just a load of idiots on the Tube who look like their mum forgot to wipe their face properly after a chocolate ice cream.

It also has that air of "I'M MAD I AM!", show off, aren't I great? wankerdom that makes me want to punch most of the participants.  There are some lovely people taking part in Movember, and bless them, it's for a very good cause, but I wouldn't want to be trapped in a lift with 98% of those tossers.

Not everyone's a miserable bastard like me though.  Northern Rail have hurled themselves into the whole event with a passion.  (I strongly suspect this started out with Tim and Andy on the Twitter team; it seems like their kind of bag).  There's a dedicated website which includes the FAQ "Is Movember just for men?" (oh Sylvia, your handlebar moustache looks lovely!) and a video, with plinky plonky sad piano music and everything:


Yes, your train driver or ticket seller may soon look like Big John Holmes in the name of men's health.  Either that or he's off to a leather night in Canal Street after work.

Northern Rail have even taken it beyond the staff and onto the trains themselves, with moustache decals stuck on the front of many of them.  Sadly, when I was out and about the other day I forgot to check whether any of my rides were bushy on the front; I must find a 'tache train before the month is out (though if they're anything like Merseyrail and their Liverpool '08 stickers, we'll be seeing them for years to come).  They launched the scheme with a press event at Manchester Piccadilly: 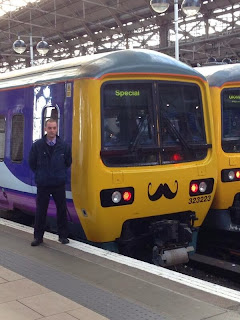 I have to admit I was distracted from the Poirot whiskers by the saucy looking guard alongside it; that's a very roguish smirk he has there.

Anyway, it's all for CHARIDEE so give early and give often.  The donation page is here.  You're probably a lot less grumpy than me.  I promise I'm grumpy for perfectly legitimate reasons, not  because I'm jealous because facial hair makes me look like a paedophile: