Among The Beautiful People

Eagle-eyed readers may have noted that I ended my last ramble in a deli.  "That's a bit odd," you may have thought.  "A small village with its own delicatessen?" 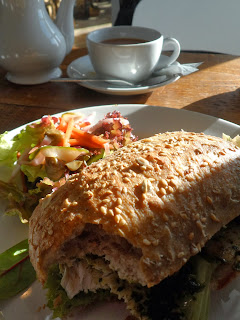 Thing is, Chelford is slap bang in the middle of the "Golden Triangle".  Bounded by Macclesfield, Winsford and Knutsford, this is the premier region of the North West for the idle rich.  This is footballer territory, self-made millionaire land, home to Coronation Street actors and entrepreneurs.  It's a place where money is the most important topical conversation - who's got it, who hasn't, and what it's being spent on.

The deli was a fine example of a place for people to spend money on stuff they didn't really need, like their wallet was too heavy and they needed to empty out a couple of twenties somehow.  Jars of mysterious oils.  Boxes of delicate chocolates.  Foreign breads "baked to order".  Bags of "kindling" for £3.50, artfully tied up and designed to be displayed rather than burnt.  The proprietress - who I thought had sneered at me as I took my seat, until I realised she was French and therefore couldn't help it - was showing a WAG her new Christmas stock.  The husband looked perfectly normal, ordinary in fact, tapping on his iPhone, but the wife's hair was too white-blonde, her heels were too high, her tits were too big.

I paid up for my sandwich and tea.  It was chicken and pesto, so I wanted something a little minty to take the taste away; there were tins at the checkout but they were £2.50 for a tiny box so I veered away sharpish.  I ended up buying a packet of Softmints on the way back to the station. 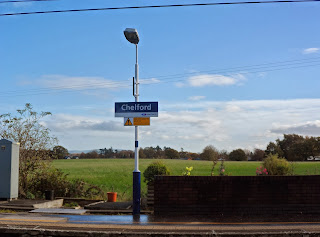 Given all this, I expected its station to be beautiful and scenic.  I forgot that people from Alderley Edge don't take public transport. 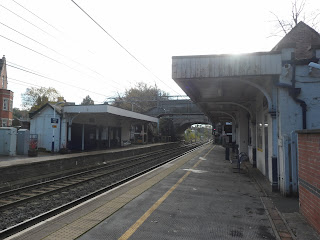 The pre-formed concrete awnings that were unloved.  The blocky footbridge.  The closed ticket office.  It was scruffy and uncared for.  The land around it had been sold off for redevelopment, leaving it hemmed in by flats and shops. 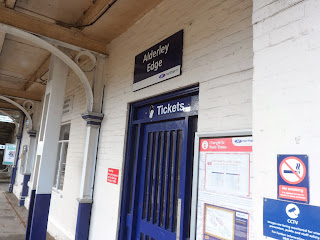 The presence of a station probably adds 5% to the house prices, but no-one uses it.  There's nowhere to park your Jag for starters, and everyone knows that cabbing it is infinitely preferable.

I trekked up to the road, the only person to alight, and got my sign picture. 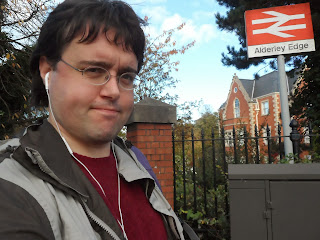 It was laid out in front of me: the village hub.  Like Hollyoaks, but not as common; you wouldn't get far with a Scouse accent here. 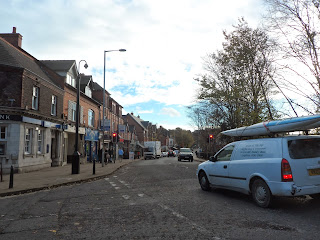 I turned away.  I didn't want to wander round the glitzy village centre with my sweaty, in need of a cut hair, and my grey anorak, and my cheap fifteen quid backpack.  I'd lower the tone.

Instead I headed for the Wilmslow Road.  I found a gem out there - Aldeli; another delicatessen, yes, but housed in a giant 1950s glass building.  It looked like it had once been a car showroom - there was a Texaco garage right next door - but it looked like an alien spacecraft, landing on the Cheshire Plain to deliver Klaatu on his peace mission.  It was brilliant, and if I hadn't stuffed myself already in Chelford, I'd have gone straight in. 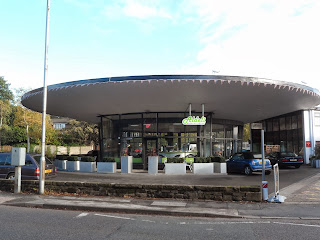 There were more dining places as I carried on out of town; a shuttered up pub next to a restaurant/hotel next to a luxury dinner experience.  I'm always baffled by these out of town nightclubs that footballers seem to frequent; if you're earning £30,000 a week, I suppose you don't mind paying for a taxi to get you there and back, but what about everyone else?  And they always look awful; terrible music and overzealous bouncers and expensive drinks.  I suppose that you're going there to try and hook up, or to be seen with the beautiful people.  You're not there for a good night out. 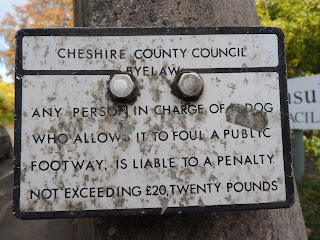 A bypass took away most of the traffic between Wilmslow and Alderley Edge a few years ago, so there's now an underused dual carriageway connecting the towns.  Lining the road are the kind of expensive villas bought by people who want the postcode but can't afford the really good houses. 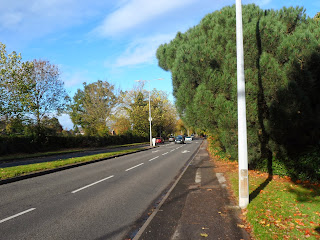 I passed Phillip Alexander, bespoke tailor (two branches: one in Wilmslow and one in Saville Row, which tells you all you need to know about the area) and arrived in the town properly.  I'd prepared for the visit by reading Miranda Sawyer's wonderful Park and Ride: Adventures in Suburbia.  She grew up in the area in the Seventies and Eighties, and paints a vivid picture of the town and its pretensions.  At one point, it even had its own credit card, the Wilmslow Card. 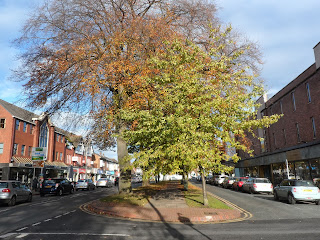 Sawyer's book was published in 1999, and even then she was shocked by its relentless upscale climb, with a bistro in the sports shop and an empty store by the old cinema turned into a gastropub.  I'd love to know what she thinks of it now, because as far as I could see, there was nothing but eateries, night clubs and pubs.  I don't know what the residents of Wilmslow do when they run out of Cif.  There was a department store, Hoopers, which has only four branches nationwide: Torquay, Harrogate, Tunbridge Wells and Wilmslow, and so I didn't dare go in because I was afraid they'd smell my working class origins and have me gutted for the pate in the restaurant. 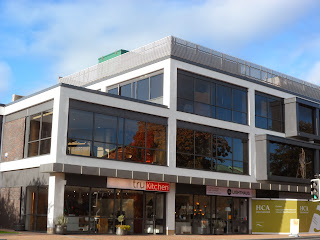 The only other kind of business in Wilmslow was home interiors.  There were furniture shops and lighting shops and designer tile stores and so, so many kitchen shops.  How many kitchens do people need?  Even the most luxurious mansion usually has only one kitchen.  You don't have en-suite ovens, or loft conversions so you have more room for a walk-in larder.  There must be people who change their kitchen on a semi-annual basis, because I can't work out how all these firms can survive otherwise.  I guess if they get one person to pay £300,000 for new taps then that pays their mortgage for a year and they don't need any other clients. 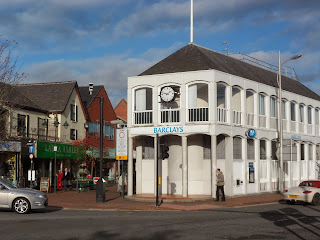 I will concede that Wilmslow seemed like a very nice town, and it was certainly pleasing to find one corner of the country where there weren't boarded up shop fronts and Cash Converters.  It should be noted that the local MP is George Osborne; these two facts may be related.  I wouldn't want to live here - I couldn't afford to live here - because even though it was busy and thriving there was a certain death behind the eyes.  People spending money without joy.  Wilmslow felt like a weirdly upscale ghost town, where the same figures shuffled from one store to a restaurant to a pub and then on again, repeating the cycle, doomed to go round and round without ever really enjoying themselves.  I felt that Wilmslow would be best as I'd experienced it, as a day visitor, passing through and thinking it was decent enough before going home; it seemed like a very small world to live in. 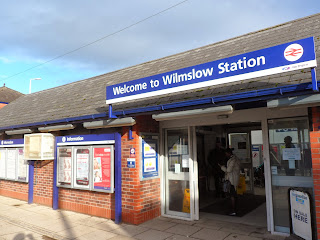 The influx of day trippers probably explained why Wilmslow station was in a much better state than Alderley Edge.  It was neat and well kept - Northern Rail had clearly thrown some money at it quite recently.  I headed up to the platform to wait for the Manchester-bound train, passing a woman who dripped fabulous en route, conducting a heated conversation on her smartphone beneath a mighty hairstyle. 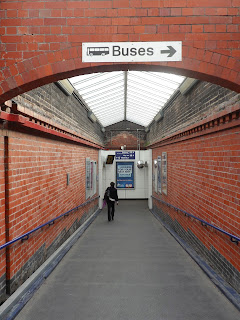 Up top, there were four well appointed platforms, one of which was surprisingly busy.  There was what looked like a group of outdoor-bound students, some well-to-do couples.  They were waiting for the Virgin train to London, which pauses here on the way from Manchester.  Most importantly, as far as I was concerned, there was TV's Les Dennis. 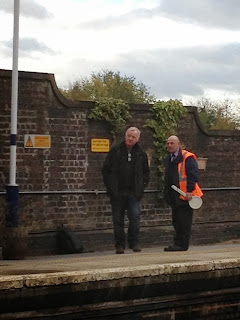 I actually have a sneaking fondness for Les Dennis.  He's the kind of old style trouper we don't seem to have any more - king of the Saturday night variety show, and easily the best host Family Fortunes has ever had (yes, even better than Bob).  His breakdown on Celebrity Big Brother and his self-parodic appearance on Extras just added to the appeal.  Plus it's hard not to like someone who emerged alive from the wreckage of Amanda Holden.  He was keeping his distance from a man who was - let's just say "merry", shall we? - and who was shouting what a great guy Les was.  Which he is, but I'm sure he'd have preferred to be anonymous.  I certainly didn't attract his attention, taking a photo from the opposite track while looking the other way.  Which sounds creepy, now that I think about it. 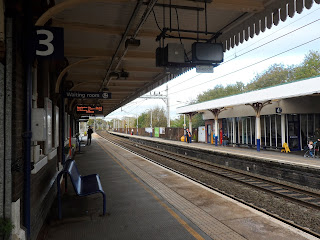 And that's why I will never be comfortable in the world of the rich and famous.  I couldn't wait for the train to arrive and take me back to where people were normal and ordinary and dull.  Just like me. 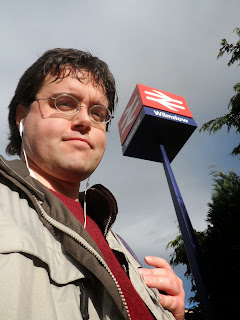 Al-deli was a garage as you intuit. It was Ford of Alderley Edge or something like that. When we lived in the area, our elderly neighbours used to buy their cars there

This is an website about uk.
Tunbridge town centre cabs