One day, someone will write a history of British New Towns, and under the chapter on Skelmersdale they'll put The name was probably a mistake.  It's a hard, guttural name; filled with Celtic and Norse overtones, yes, but still ugly on the tongue.  My mum used to find it hilarious; whenever we drove past the sign on the M58 she'd giggle to herself, and sometimes murmur, "Skelmersdale. It's so Northern."  Building a New Town means you can start again - the planners could have called it "Lovelytown" or "Happyfields" or "Absolutely Gorgeous City" if they'd wanted, but no, they stuck with Skelmersdale.

And the shortened version is Skem, which is even worse.

Mind you, they made so many mistakes with Skelmersdale, it's hard to know where to start.  It was built as an overflow town for Liverpool in the Sixties.  The idea was that Scousers would be taken out of their substandard homes and put in new houses in a town filled with jobs and parks.  It was designed to be self-sustaining, with factories to work in, schools for the children, and shops and leisure facilities to keep them entertained.  The M58 was built along its southern edge so that all the goods could be swept out to the Port of Liverpool or the M6.

It turned out to be more of a hole in the centre of Lancashire, sadly.  The businesses didn't come, driven away by the economic recessions of the Seventies and the general collapse in manufacturing in the North.  People felt disjointed, abandoned, with nothing to do and nowhere to go.  A town built for 80,000 residents today houses barely half that.  It means that there are wide, unused boulevards all over town, gigantic roundabouts constructed to carry commuters swiftly to work, underpasses to segregate pedestrians from the fast-flowing traffic that never came.  And there's no railway station.

There used to be a railway station.  Skelmersdale station was on the western edge of what is now the Old Town, built to service the small hamlet of the same name and on a branch line that ran from Ormskirk to Rainford (then Rainford Junction).  There were a couple of other stops on the route, notably at Westhead, but it wasn't a principal route and British Railways closed the station in 1956, with the tracks getting lifted in 1968 and turned into a road.

At no point does it seem to have occurred to anyone that a railway route to Liverpool - even a roundabout one via Ormskirk - might be a good idea for the residents.  The car was the future: everyone would have their own, and if they didn't, motor buses would be an admirable alternative.  Skelmersdale was a New Town, remember; the planners didn't want everyone rushing back to the old city at the drop of a hat.  It's notable that the M58 doesn't go anywhere near Liverpool, instead slicing across the top of the city like it's afraid it might catch something if it gets too close.

Problem was, a lot of people in Skelmersdale didn't have cars.  These were Liverpool's poor, remember, and though they had new three bedroom semis, they weren't given an Austin Montego as well.  They needed public transport.  Even today, the bus journey from Liverpool to Skelmersdale takes an hour.  That's a long journey.  It's difficult not to note that while Skelmersdale has problems with crime and deprivation, its neighbours in West Lancashire with their own train stations - Ormskirk, Burscough, Parbold - are relatively affluent and successful.  Skem needs a station.

The need for a Skelmersdale station has gathered pace over the last five or six years or so.  Merseyrail's plans for a station at Headbolt Lane has brought the idea of an extension back onto the table.  The Kirkby line is very under capacity; with only three stations of its own, a train every fifteen minutes and an extensive dwell time at the terminal, it'd be a great opportunity to send trains  Skelmersdale's way.

With that in mind, Lancashire County Council have launched a new West Lancashire Highways and Transport Masterplan, with the Skelmersdale rail link its top priority.  The idea is to create a triangular junction south of the town, then send the trains from Liverpool and Wigan along what is currently Whiteledge Road to a new combined bus/train terminal in the town centre.  Interestingly, the masterplan seems to completely void out the road, raising the possibility that the road will be sacrificed for the railway - a pleasing reversal of history. 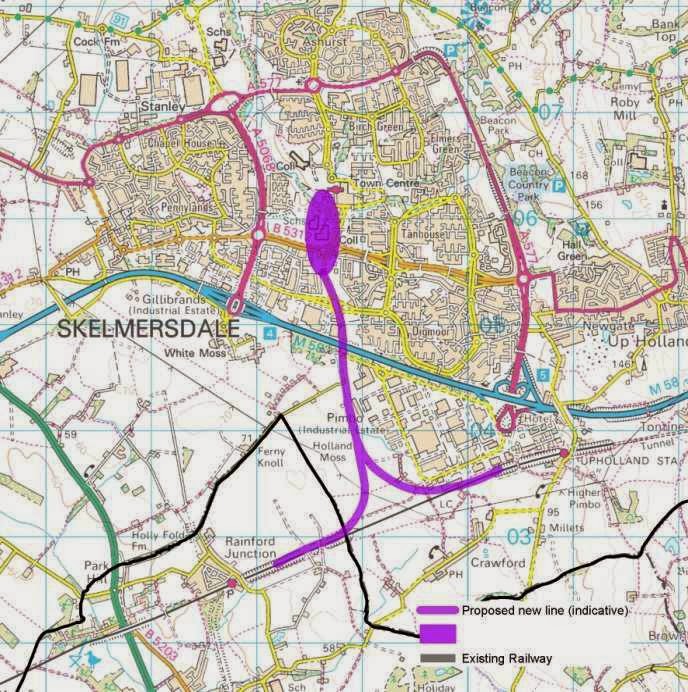 There had been two other schemes, to create park and rides at the edge of town: one by upgrading the currently underused Upholland station, the other by restoring the Ormskirk-Skem branch.  This is the bravest and most gratifying option though, and I'm glad to see it's the one that the County Council want to pursue.  There are a few issues, mainly to do with funding: while Network Rail, the County and District councils are all on board with the idea, none of them really want to pay the millions of pounds required to make it happen.

Another, pleasing side effect of this scheme would be poor old Rainford station being brought into the Merseyrail fold.  It's always been an orphan: the electric lines stop at Kirkby, even though Rainford is also in Merseyside, leaving it with a substandard service compared to its neighbours in the Merseytravel area.

That's not it for railways in West Lancashire.  The report also notes that Burscough and Ormskirk, while having a lot in common, don't actually connect together in a very meaningful way.  There's a train service between the two towns but it's erratic and slow, and if you want to continue on to Liverpool you have to change trains.

The consultation proposes electrification of the line at least as far as Burcough Junction, the single platform station at the south of the town, and possibly further towards the centre.  In the process, they've finally laid the "Burscough Curves" plan to rest.  This would have restored the connections between the Preston/Ormskirk line and the Southport/Wigan line: 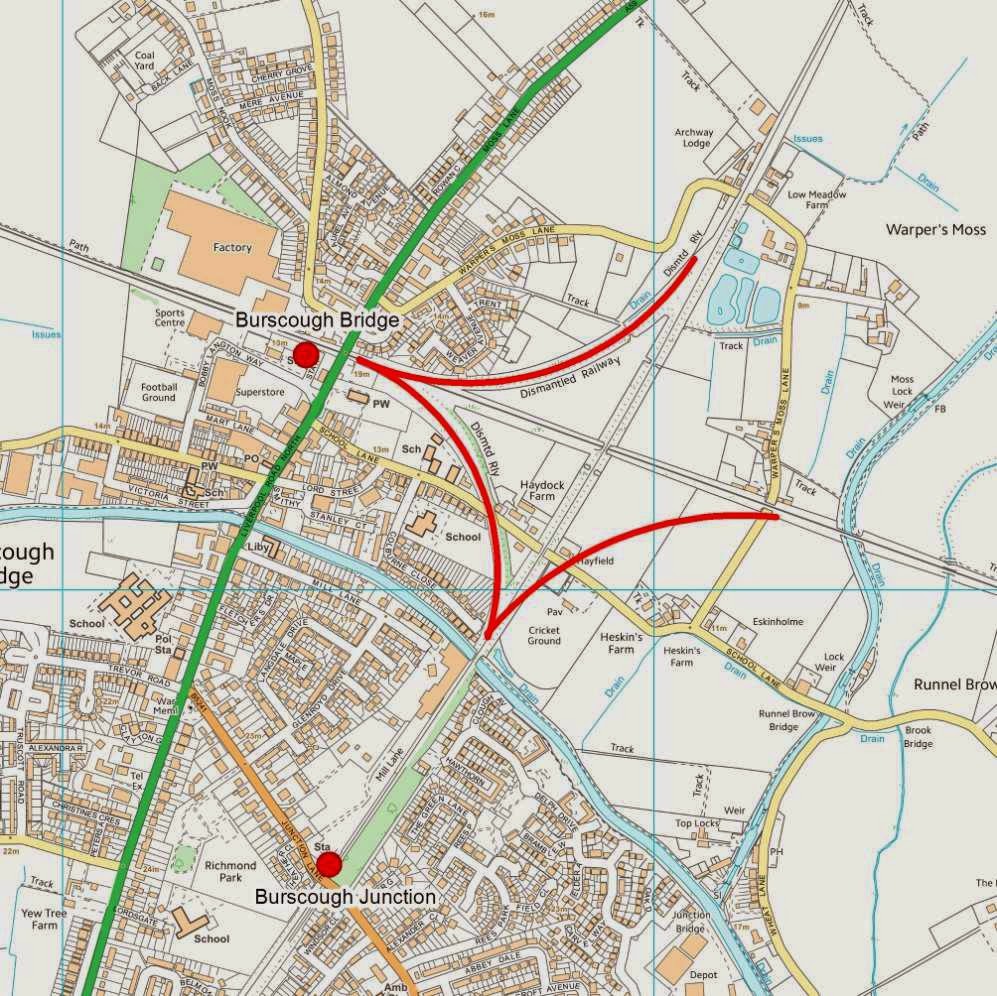 I've never been keen on the restoration of the Burscough Curves.  There's already an electric line to Southport - this would have been indirect and slower.  It seems that Lancashire County Council agree with me, and have now decided to push for electrification beyond Ormskirk.  Their idea is that one train an hour from Liverpool will continue on to Burscough Junction/a new Burscough Central station, giving them a good regular service south and helping to alleviate some of the traffic on the A59 and in Ormskirk town centre in the process.  This will also have a positive knock on effect for the Preston services, because the trains will have less distance to travel so they might be able to have an every hour service as well.

The eventual aim is for the whole route to Preston to be electrified of course, but that's just an ideal.  I mean, where's the benefit in connecting two major north west cities with a fast, direct rail route?  That would be MADNESS.

The whole consultation exercise opens on the 2nd December.  In the meantime you can read the document here.

That was all a bit boring and worthy, wasn't it?  Sorry.  I'll get back to wandering the countryside making innuendos soon, I promise.
Posted by Scott Willison at 15:20

"I'll get back to wandering the countryside making innuendos soon, I promise"

I, for one, am disappointed that you missed the giant purple sperm on the map of Skelmersdale.

This is a bit of a change of plan - previous proposals have always involved restoring the Ormskirk end of the line, and terminating on the edge of town. This new idea is much better in terms of actually going where people want to go.

Rainford to Liverpool is about 40 minutes (including the wait at Kirkby for a connection) so I reckon a through Skem-Liverpool service could be done in roughly the same time.

I'm not holding my breath - remember when Merseytravel announced that the Headbolt Lane extension was definitely going to happen? How long ago has it been since we heard anything about that? If it happens, however, it will be genuinely useful.

I think (as usual) Lancashire County Council have missed the best solution for Burscough.

That is:-
1. Extend Merseyrail to Burscough Bridge via the South Curve into a bay platform east of the bridge.

2. Extend the Preston line to Burscough Bridge via the North Curve into a bay platform also east of the bridge.

You've then got a nice interchange including buses. The logical next step would then be to put the wires up on Preston-Burscough Br.

I can't think of a station more central to Burscough than Bridge, so the other ideas don't make any sense to me.

I think that it's about time that this should happen!

Finally they have decided to put the proposed rail link and station in the right place and there would be no hard measures in losing Whiteledge Road to the new rail link if it comes to fruition.

I lived in Skelmersdale for 26 years man and boy and this was always a big frustration for me for having to travel on buses to get to Liverpool, either directly by bus or by getting a bus to Ormskirk (to get the train to Liverpool). If this plan finally comes to fruition then I would seriously consider moving back to Skem as a lot of my friends and family still live there.

As for re-instating the Burscough Curves, I think that they should re-instate the curve to Burscough Bridge station, as that is the heart of the village/town and it would connect up to the Southport-Manchester line but I don't think that there should be any through services though. I also think that they should totally electrify the line between Ormskirk and Preston due to the line being much busier and in use more at peak times. I don't think it's best to double the track, just have a couple of loops in operation (there's already one at Rufford station), to ensure an hourly service (at least!).

I'm not keen on using the Curves to get trains into Burscough Bridge because that'll lead to an intermesh of the two services. A delay on one would be a delay to the other. I'd much rather have a station with new platforms on both lines so you can change with ease. School Lane (which the Ormskirk/Preston line crosses) is only a five minute walk from the centre, and it means there is space for a car park to take some of the strain off Ormskirk. I don't fancy mothballing a bridge because what often seems to happen is everyone forgets about it and then it becomes too dangerous to reopen. That direct route to Preston is too valuable to lose!

As for Skem, I was thinking about going out there to take a look at the proposed route, but the idea of an hour on a bus just to get there put me off. Which is a story in itself. I did note from Google Maps that Whiteledge Road has no other roads coming off it, which means closing it wouldn't seem to cause any problems for interconnectivity. The boon of gaining a railway station must overwhelmingly outweigh the increased traffic on adjoining streets.

Looking at the Skelmersdale map I saw a very unique shape I'd vividly read about some time ago.

Thanks for the blog!