Adventures in Space and Time 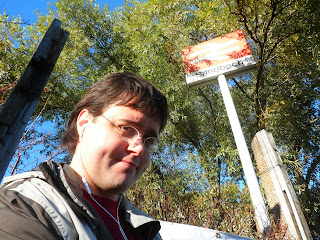 It's a curiously satisfying word, Sandbach.  Try saying it out loud.  Sandbach.  The short "a" in sand, the soft "ch" at the end.  There's something almost Welsh about it.

While the town of Sandbach is a pretty medieval market town, complete with a Saxon cross and tiny squares, the station is flung out on the A533, almost out of town.  If it was being built today, this would be a park and ride station, but back in Victorian times it was simply a case of sticking a station wherever the line happened to pass by. 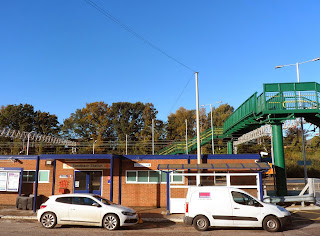 It's an ugly 1960s building that's been built mainly for the convenience of the staff than the passengers.  Half of the building is devoted to Network Rail accommodation, with misted out windows, while the ticket office has the kind of opening hours that can only be divined through consultation of the runes.  Indeed, I skipped passing through it altogether, getting into the station through a side gate. 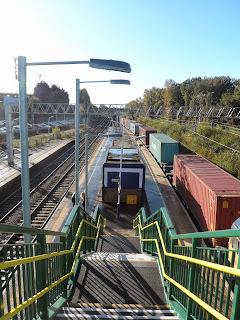 There must have been problems on the line during the rush hour that were only now settling down.  The fast train to Manchester had been delayed by ten minutes, and a GBRf freight train was being held at the side platform to let the passenger services by.  It clicked and grunted impatiently, dying to plough onwards, like a bull in its pen. 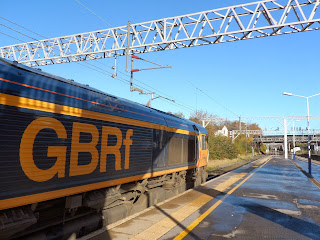 Fortunately the fast train just skipped the smallest stations; it still called at my next stop, Holmes Chapel. 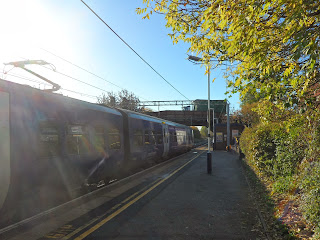 The buildings here were even shabbier than at Sandbach, barely more than prefabs.  The blue and white Northern Rail branding gave them a mock-Tudor appearance, even more pointless stuck on a box by the side of a train track. 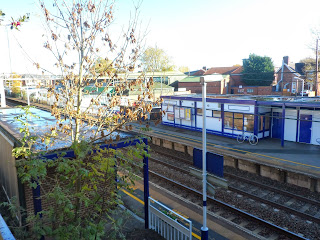 I walked up and over the railway bridge behind a woman with a pink rolly suitcase.  She wasn't walking very fast, and because I kept stopping to take pictures, I never actually overtook her.  I think it started to make her nervous, because finally she stopped on the street corner and fiddled with her case until I passed. 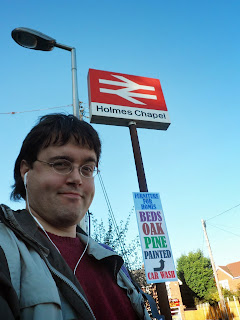 I like the clarification on that sign that it's Furniture FOR HOMES, just in case you was trying to buy an oak four poster for your hamster.

I decided to take the more direct route to my next station, Goostrey, which meant leaving Holmes Chapel and walking down an industrial road.  Ordnance Survey had this area marked as Works, but it was clearly in need of updating.  One set of factories on the map was now being turned into a housing estate, with a new roundabout for access and scaffolding poking over the top of advertising boards.  The others had been joined by small red office buildings for tiny businesses.  Where the factories had ceased to be useful they'd been obliterated, ready for redevelopment into more houses. 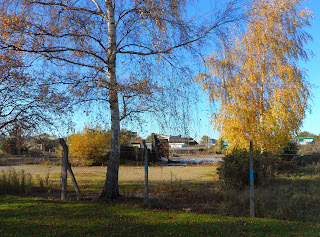 That little expanse of bare concrete was still signposted as Royal Mail.  [NOTE TO SELF: insert News Quiz-esque witty satirical comment about the destruction of the postal service here].

After a while the industry stopped as well, and past a couple of houses that were very keen to tell you they were on a Private Road, I was out on a pavement-free country route.  It was a national speed limit area so there was a constant burr of fast moving traffic, but the grass verge was generous and not too overgrown so I didn't have to risk walking in the road.  There were a couple of hairy moments as I swung round chevron signs just as a truck appeared round the corner but beyond that the only danger was soggy socks from the dewy grass. 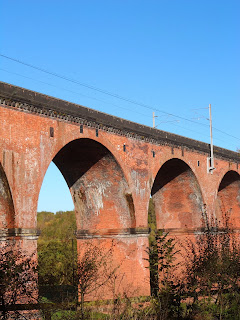 On my left the Twemlow Viaduct suddenly appeared, 30 metre high brick arches that carried the railway over the river Dane.  Down on the ground this epic piece of engineering seemed completely unnecessary - I could probably have jumped the river myself with a decent running start - but it underlined the Victorian attitude to railway building.  They could have had the railway come down into the valley, then a little bridge, but it was better for the trains if a huge viaduct was simply built across the whole thing, so they did that.  Always ambitious. 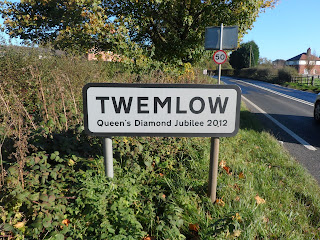 I bet Her Majesty was deeply touched by that beautiful, heartfelt tribute to her Jubilee year.

I skirted the edge of the village, passing sodden fields churned up by tractors and trees stripped bare of leaves and fruit.  Occasionally the road would be shaded completely, and out of the morning sun, I felt the sudden chill of November sneaking through. 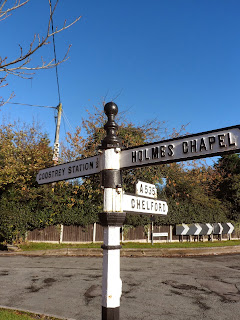 I turned left by a rusting red telephone box for the last half mile to Goostrey station.  For a while it was just more late Autumn English countryside, then a vision of the future rose up out of the trees. 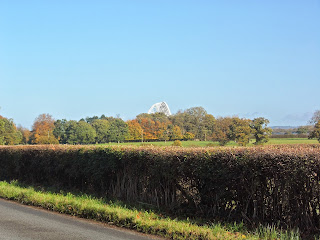 The Lovell Telescope at Jodrell Bank is still the third largest movable radio telescope in the world; it was number one when it was built.  I loved space exploration as a child and so just the name Jodrell Bank carries with it an air of mystique, of probing the unknown and the unknowable (it's also a comedy euphemism for masturbation - another reason to cherish it).  Its position out here in the Cheshire countryside, right by the railway line, speaks of a very practical, unglamorous attitude to space and exploration.  Jodrell Bank exists in the same canon as Doctor Who and Quatermass and 2000 AD; fantastical stories of science fiction that exist in the mundane.  Only the British would create a tv show about a cantankerous pacifist in a time traveling call box that didn't work properly; only the British would take its window to the stars and stick it in the parish of Lower Withington.  We always keep one foot on the ground, even as we look up at the heavens.

The telescope remained a companion to me as I progressed.  A couple of healthy looking women in lycra jogged past, carrying in a conversation even as they burned up the calories, and then Goostrey station was there, crouched under a mound of a railway bridge. 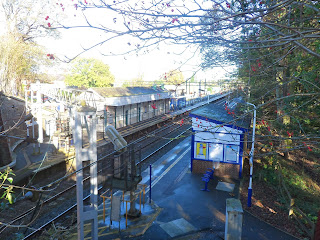 Goostrey looked like it hadn't been touched in years, which surprised me.  No starry murals?  No glow in the dark moon transfers?  Not even an ALF saying Alight here for Jodrell Bank?  There was a bit of a car park, but nothing advertising its proximity to the telescopes.  In fact, there was still a British Rail sign, right above a British Telecom phone box, which made me wonder if I was experiencing a time slip back to the 1980s and a Tripod was going to come crashing over the treetops. 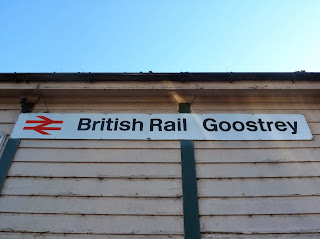 Still, it was prettier than the previous stations, with the air of a country halt about it.  The building was firmly locked and padlocked: a neat sign on the door said If you require access to this room, please contact any of the following numbers for the combination, and then a list of people from the Friends of Goostrey Station.  I was tempted to call up and say "I just fancy having a nose - what's the combination?" but I didn't.  In fact, I struggled to think of what you would want access to the room for - there was a shelter on the platform, so if it was raining, you was safe.  Perhaps you can hire it for weddings and bar mitzvahs. 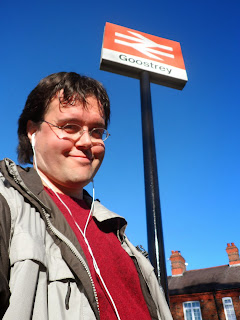 It was just a brief little skip to my next station, Chelford.  It's a bit in the middle of nowhere, Chelford, so I'd pencilled it in as a rest stop, rather than walking on to the next stop.  Plus it was lunchtime, and my stomach was starting to rumble. 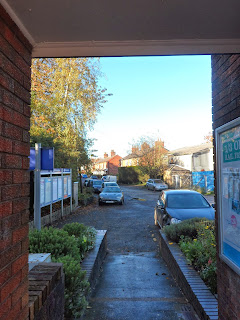 I left the 1980s brick building and went in search of somewhere to eat.  There was a butchers, and a branch of the NatWest; a man had fallen down outside the greengrocers and a small crowd was gathered to attend to him.  I'm afraid I didn't stop to help.  I could hear someone was already on the phone to the ambulance, and there was a woman on her knees attending to him, and a couple of people who were just watching.  I didn't have anything to contribute; I got a First Aid badge in the Cubs, but that was twenty odd years ago - I'd probably break his hip as I tried to manhandle him into the recovery position ("yes, I'm positive you're meant to have your left foot behind your ear").  It didn't stop me from feeling guilty for the rest of the afternoon. 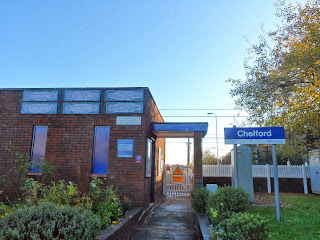 I passed Chelford Farm Supplies, which seemed to cater more for horse riders looking for tackle and Barbour jackets than pig feed, and then wandered out towards the Egerton Arms, on the edge of the village.  I just fancied a pint and a sandwich, but it was a gastropub, with the emphasis more heavily on the "gastro" part.  Every table had a long menu and knives and forks, and it was buzzing with customers and waitresses. 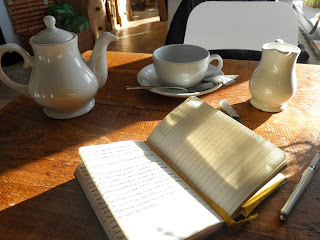 Instead I slipped next door, to Jones Deli, where I found a whitewashed table by the window and ordered a chicken and pesto sandwich and tea for one.  Yes, that's right; I passed up alcohol in favour of tea.  I must be losing my touch. 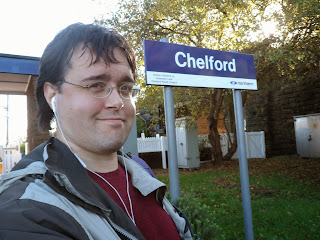 Sandbach ending in a soft "ch"? Wikipedia dares to suggest it's a hard "ch" but that could be someone being a bit arch.