I was in Belgium to visit Bruges.  Beautiful medieval buildings, scenic canals, beer, chocolate, blah blah blah.  That's not why you come here though, is it?  You come here for my ill-informed dissection of railway architecture! 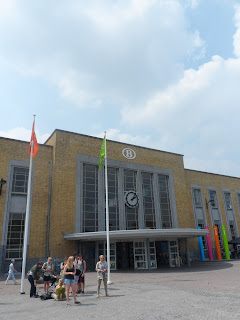 Bruges (or rather Brugge) railway station has a great 1930s look to it.  It's got that simple elegance, that great symmetry that the best buildings of the time have.  It overlooks a wide open square, only slightly ruined by the large unsympathetic shopping centre on one side. 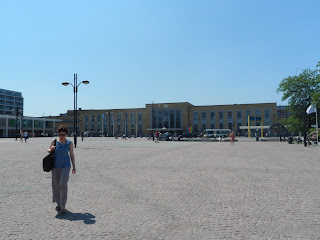 Inside the main entrance area there's a mural dedicated to the city, and a general vibe of calm, unhurried elegance. 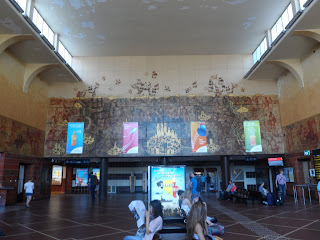 It can get away with this because a modern extension has pulled away all the inconvenient necessities of a modern station.  It's a long passageway under the platforms and this is where you'll find the shops, the vending machines, the inevitable Starbucks and Carrefour.  The extension has also provided a new exit to the opposite side of the station, allowing traffic from the north to get in. 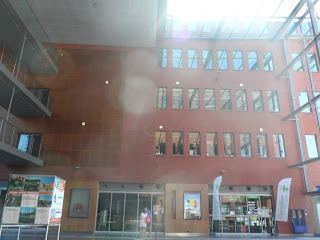 Problem is, the new facilities are so generic, it's hard to get excited by them.  It's literally a corridor with shops and escalators; there's nothing to encourage you to linger.  Just get the hell out. 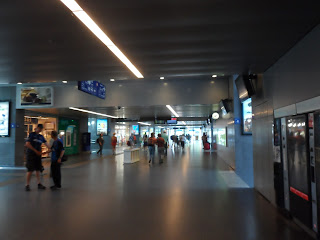 (Incidentally, it was very hot in Bruges, which is why my face is bright red). 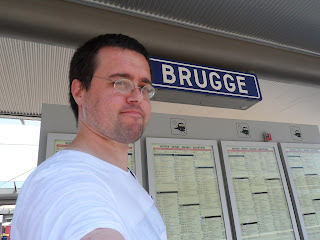 This undertrack passageway design is amplified 1000 times at Brussels Gare du Midi/Zuidstation (yes, the Belgians not only can't decide on which language to use, they can't decide what to call their largest railway station).  A lot of European stations seem to feature this under-platform arrangement, while it's pretty rare in the UK.  In Britain, everything's up top; shops are built over the tracks, alongside them, on platforms and on concourses.  It means that you can still see the trains pretty much everywhere you go.  In Europe, they seem to want to distract you from the trains - the platforms are just there for getting a train, nothing else. 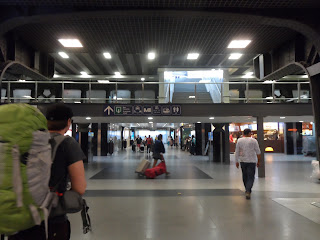 It feels oppressive and dark.  There's no natural light except for what manages to penetrate from the platform entrances.  There's harsh fluorescent bulbs casting an ugly white glow over the passengers.  There aren't enough seats, because seats would get in the way of people moving in and out.  There's no air conditioning, and no fresh air, so the station becomes oppressively hot. 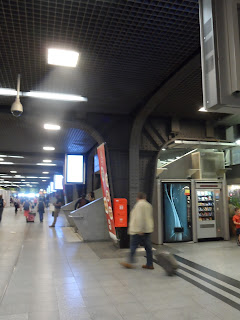 There are some nice bits of ironwork from the original station, but they're tucked in amongst the retail offerings and the CCTV cameras.

Even the shops feel down at heel and a bit grim, more so than your usual railway station fare.  There are no Marks and Spencer Simply Food type outlets here, just grubby supermarkets and shameless Have you remembered your souvenir of Belgium? stores keen on extracting the last of your Euros. 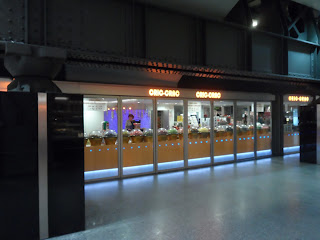 It's not all bad, though.  Because of Britain's refusal to enter the Schengen agreement, the Eurostar facilities have to be housed in their own bubble.  An extension was built on the side of the station to accommodate the immigration and security facilities, plus two platforms for the trains that are entirely separated from the rest of the station, and this is a bit of a triumph.  For starters, it's got Tintin in it. 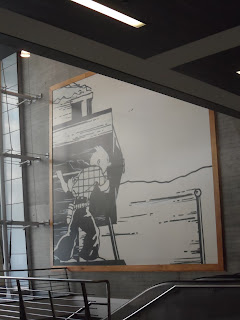 The whole entrance area is devoted to Belgium's most famous reporter, and I couldn't be more pleased.  I love Tintin.  Well, I love the ones where he's not horrifically racist, anyway. 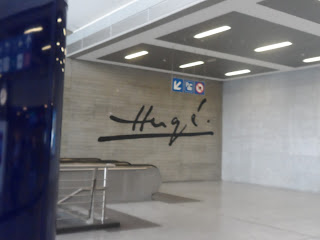 It's the only bit of the station that feels open and fresh.  Arriving this way from London is a pleasure, so long as you immediately go into Brussels after that and don't wander into the rest of the station.  Also, and I don't often do this, but the toilets in the Eurostar waiting lounge are bloody lovely.  They're decorated with icons of Britishness but the understated design over the urinals was fantastic. 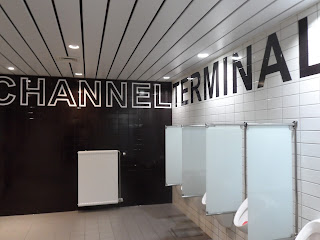 Yes, I took a photograph in the Gents.  And they still let me back in the country. 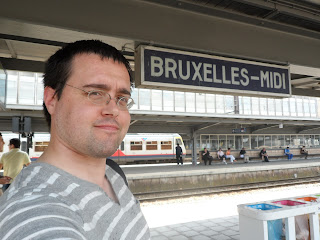 The other good part about Gare du Midi/Zuidstation is it has an underground.  I had a few hours to kill before the train back to the UK so I took the opportunity to ride the metro - as if I needed an excuse.  There's a hall which is filled with more shops, even more down at heel than the ones above.  Your eyes don't deceive you: that is an ad for a McBaguette.  (I also saw an ad for the Homer Burger at a different chain, named after the Simpsons character and shaped like a doughnut.  I would actually like to try that). 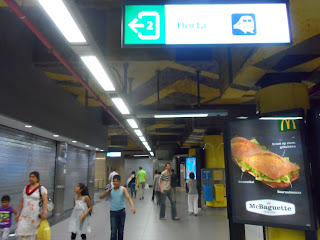 There was a bit of hassle, initially, as I tried (a) to work out which line to take and (b) how to validate my ticket, but finally I was able to get through onto the platforms. 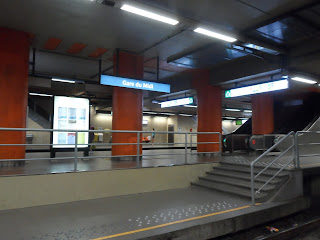 Technically speaking, Lines 3 and 4 are pre-metro.  The station is served by trams, not larger metro trains, and they have on-street running outside the city centre.  The platforms have been built for later conversion, however.  The trams have a low floor, and are shorter than a train, so they call at a lowered section in the centre of the station. 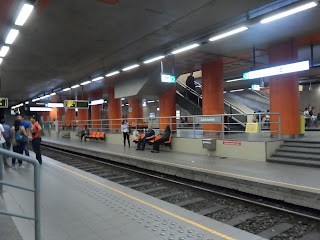 It's a clever piece of forward planning which you would never get in the UK.  For starters, you'd have to build an underground station, and that's never going to happen.  Secondly, it'd require a presence of mind and an upfront cost which would be engineered out at the planning stage.  The Department of Transport would look at £100 million for a future proofed station or £50 million for one that'll just do its job, and it'll go with the lower number every time.  Even if it'll cost another £100 million at some point in the future to build the interchange you could have included back at the beginning. 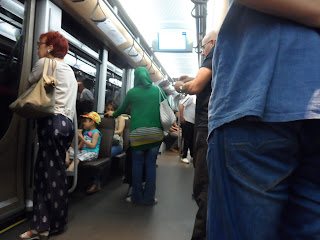 I grabbed a seat on the hinge for the journey up the line to Bourse/Beurs.  It's the station closest to the city's Grand Place and the Manneken Pis - I figured that I may as well just cross off two of the city's biggest tourist attractions in an afternoon splurge.  The Atomium will have to wait for another time. 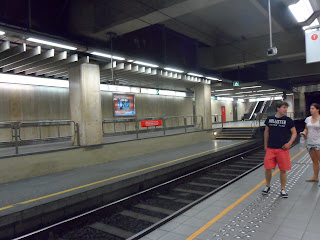 All that space makes the station a little overwhelming.  There are huge expanses of platform that are simply not used, plus an open mezzanine level that is ignored.  It's a vast empty space waiting to be filled. 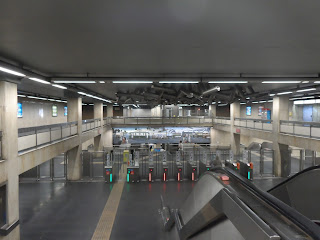 Also the artwork on the ceiling reminded me of that bit in Aliens when they look up to find the roof crawling with xenomorphs. 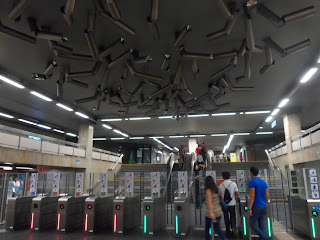 It's a price worth paying, though, if it means you end up with a station that doesn't become horribly overwhelmed within days of opening.  Kudos to you, Belgium, and your efficient forward thinking. 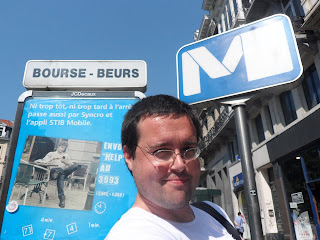 However, your Metro logo is rubbish.
Posted by Scott Willison at 17:45

And for your next challenge/adventure - you really must see Antwerp train station ;-)

I've had a number of people suggest that I visit Antwerp next. Unfortunately, no-one has offered to pay for my tickets.

Kunst-wet station in Brussels is worth a visit ;-)