I'd been on the Eurostar once before, but it was a bit of a mess.  We'd booked the tickets ages in advance but the week before we travelled, there was a fire in the Channel Tunnel.  It looked touch and go whether we'd even be able to travel, but finally we were at St Pancras, ready to go.  Seat reservations were abandoned.  Eurotunnel simply wanted as many full trains as possible going through as quick as they could.  We were pushed onto a train which headed to Folkestone and waited.  One of the tubes was closed, so the trains were being sent through in batches; a few trains towards France, then a few trains in the other direction.

The train was rammed, people were fractious and a bit nervous, the staff professional but clearly distracted.  It wasn't a great way to travel and it was a relief when we reached Gare du Nord.  We flew back.

This time was different.  This time I had a good ticket, on a clear service, with a reserved seat all the way to Brussels.  There were no disasters and no tragedies.  I was finally going to enjoy the Eurostar. 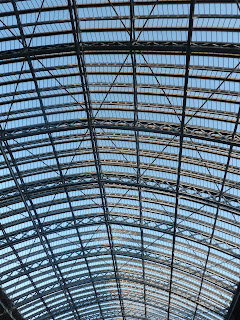 I've waxed lyrical about St Pancras International many, many times before, so I won't bother you again.  Suffice to say that it's a holy temple of the railways, and should be put in the same category as Westminster Abbey or Mecca.  I practically genuflected as I rose up the escalator onto the platform, that wonderful blue ceiling above me, the long Eurostar trains reaching into the distance.  Coming back, it's even better; you get a burst of British pride as you come into that wonderful, wonderful building.  It makes you want to grab the nearest foreigner and shout "Now that's how you build a railway station!" in their ear. 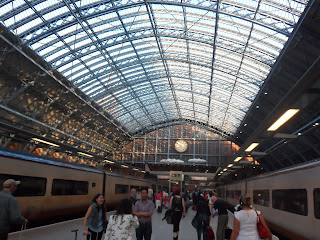 (Full disclosure: I wish the Olympic rings were still up there.  London's hosted the Games more times than anyone else - I see no reason why they can't be a permanent feature.  But there are so many things from the Olympics I wish were still around).

I was in Standard Premier, which is the middle of Eurostar's three classes of travel.  There's Standard, for people who are just nipping under the Channel and aren't bothered about fripperies.  There's Business Premier, for people on expense accounts.  Standard Premier gives you more seat room, more tables, and a complimentary meal.  On the early trip to Brussels, it was a Continental breakfast - croissant, roll, yoghurt, juice.  Coming back there was a shrimp salad, with an individual bottle of wine and more bread rolls.  There was also a chocolate mousse which unfortunately resembled something recently scraped off a Wellington boot.  It was airline food, basically, but I willingly accept any slight luxury. 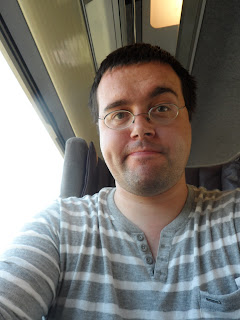 Stratford International whizzed past - a station that, despite its name, gets as many international trains as Birkenhead North - then another tunnel and we were out on the fringe of London.  It is an astonishingly fast train.  From the centre of the city to its outskirts in ten minutes, to the Medway in twenty, and to the White Cliffs of Dover in thirty; it's the future and it's almost incomprehensible.  You can't help noticing all those cars on the M2 being left for dust as you pass, but inside the cabin everything was cool and unflustered.  It didn't feel especially fast.  When you board a plane, you get those g-forces as it takes off, the engines shouting, seatbelts pressed into your stomach; it all says you'd better believe we're going fast.  The Eurostar is unhurried, quiet and polite, just calmly breaking speed records every day.  It's metaphorically yawning as it does another 150mph turn.

I was disappointed by the lack of fanfare as we entered the Channel Tunnel itself.  I wanted an announcement: "Ladies and gentlemen..."  I actually wanted the carriage to clap.  It's funny how quickly we've become blasé about this.  It's a TUNNEL under the ENGLISH CHANNEL.  It connects Britain and France for the first time in TWO HUNDRED THOUSAND YEARS.  There are BOATS RIGHT ABOVE YOUR HEAD.  And yet people were just reading the paper or listening to their iPod or dozing, a carriage full of "whatevs".

Once you're in there, nothing much happens, just a lot of blackness.  Before you know it, you're back out again, in the French countryside, which looks disappointingly like England.  The only sign you're in a different country is that the train crew now make their announcements in French first.

It's nice enough, Eurostar, but it's a little bit... tatty.  A bit old fashioned.  I went to the toilet, and you have to pump the tap with your foot to get any water out of it.  A nip to the buffet for a can of Coke (€2,20!) revealed a sad little shop, with bored staff members lazing around and tables with no chairs. 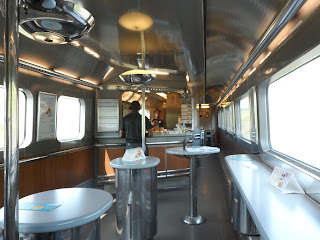 My purple and grey seat was comfy enough, but that colour scheme just seemed a bit Eighties.  All that grey.  The Eurostar felt like it was still operating in 1989, carrying Yuppy twats across the Channel for dirty weekends.

It's not on.  Concorde's been mothballed, and the QEII is in a dry dock somewhere.  The opportunities for glamorous travel out of the UK are limited.  Airports are bland spaces filled with boredom, ferry terminals are the home of the drab and the dispossessed.  St Pancras promises luxury and excitement - it has a champagne bar.  It's an exciting place and the Eurostar should be an exciting journey.  Instead we've allowed it to become just another train journey.

The train crossed the border into Belgium and again, there was no announcement, just another language shift, as Flemish went to the head of the queue.  The Schengen agreement has taken away all the wonders of a frontier crossing.  I wanted the train to be stopped and leather jacketed Belgians to move down the carriage checking our passports.

I guess I want a 21st century railway to have a bit of 1930s glamour about it.  I couldn't imagine Agatha Christie or Ian Fleming setting a thrilling adventure aboard the Eurostar.  John Gardner had a bash at putting Bond in the Channel Tunnel in Death is Forever, but as with most of his late period novels, his heart wasn't in it.  It's been conquered by the businessmen and the managers, and there aren't enough travellers.

That's not to say it wasn't amazing when we arrived at Brussels' Gare du Midi only a couple of hours after we left the UK.  It was a fantastic, exhilarating ride.  I just wish it had been more of an experience.

Have also done that journey.

I really want to go on Eurostar, for all the obvious reasons. I wish I'd used it pre-HS1, though. I liked the idea of trains racing through the French countryside and speeding through the tunnel - only to find themselves threading their way past slam-door Network SouthEast EMUs on the English side.

You're a strange little man, Hampton.