For reasons far too dull to go into here, I found myself in Manchester with a few hours to kill.  It was the hottest day of the year.  The Manchester International Festival was offering up Kenneth Branagh's Hamlet.  In Salford Quays, you could view previously unseen sketches by L S Lowry.  Via on Canal Street had a reasonably priced cocktail menu.  In short, the city was my oyster.

I immediately headed out to the suburbs so I could visit some train stations, because I am an idiot. 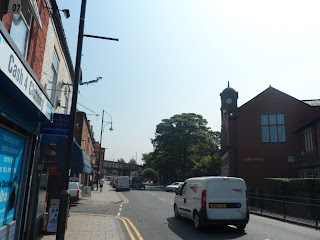 I started in the pretty suburb of Romiley.  I'm not sure why, but Romiley doesn't sound like a real place to me.  It sounds like something out of Game of Thrones; I would not have been surprised to find it full of dragons and large breasted women in chain mail.  It actually turned out to be a perfectly ordinary street of shops and pubs.

The station building recently celebrated its 150th birthday and, while it's certainly seen better days, there are still hints of its previous grandeur from the street.  Little terracotta flourishes beneath the windows, ironwork lamps.  There's a bit of greenery poking out of the brickwork and there are far too many ugly signs screwed into the wall, but it's a pleasing place. 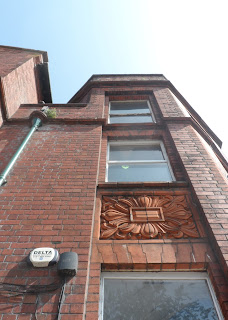 Unfortunately there's a lamp fitting right in front of the station sign, which seems like extremely bad planning to me.  It meant I had to go for an odd angle to collect it, and then adjust the exposure just so you could read it.  This just shows my commitment to evidence gathering; I want you to be able to see that station sign. 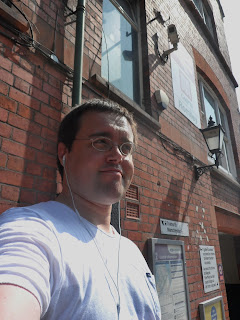 It's still not entirely clear but trust me, it's there.

I headed up the flakily painted staircase to the ticket office to buy a Wayfarer.  This is Manchester's version of the Saveaway or the One Day Travelcard, but it's much more than that.  The Wayfarer's boundaries extend far beyond TfGM's jurisdiction, into the adjacent districts, making it a great value purchase for a day out.  The Wayfarer can take you from Buxton in the south east to Parbold in the north west, to Warrington, Northwich and Chorley.  At £11 it's a positive steal. 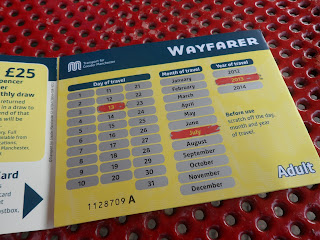 The only downside is it comes out of a drawer, rather than the machine, and so I had to endure the man in the ticket office sighing and looking disgruntled because he had to get out of his chair.  He wandered into the back to fetch the box of Wayfarers, giving me an evil look the whole time, before finally tossing it under the glass partition with all the care of Michael Jackson with a baby.  Sorry to inconvenience you by buying something, sir. 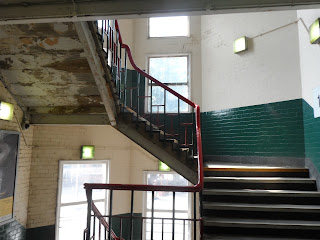 Back outside there was a wonderfully evocative spiral staircase up to the Manchester platforms.  When it was first built, there was a glass dome at the top of the stairs, a little crown on top.  That's long gone unfortunately, replaced by a metallic roof which, while certainly practical, doesn't have the same charm.  Or any charm at all. 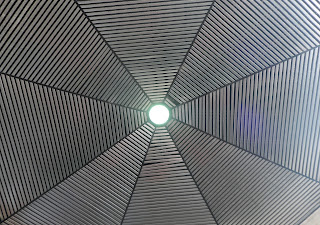 I walked under the tracks through a wonderfully cool underpass and up to the southbound platform, past a hyperactive boy taking the steps down two at a time and shouting "look at me, grandad!" to the long-suffering relative behind. 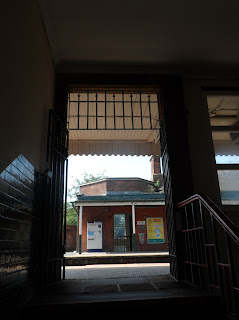 You can see the octagon of the stairwell framed in the doorway there, and how the dome must have once capped it beautifully.  Now it just looks... unfinished.

That aside, at platform level Romiley's a bit of a star.  It's got some great Victorian buildings that have been carefully maintained.  There's a strange sleight of hand going on - even though I was above the street on the railway bridge, it's been designed to look like a ground level building; it's basically a country station on stilts. 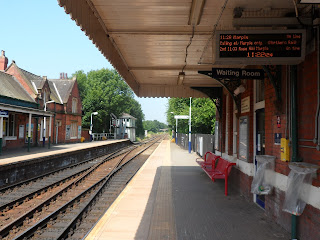 With the trees and the wooden signal box, it was a reminder that Romiley is a village that's been swallowed up by the conurbation.  It's a rural halt that's been co-opted into the city.  A sign warning you that the waiting room was closed at certain times "due to persistent vandalism" reminded you that this was an urban stop. 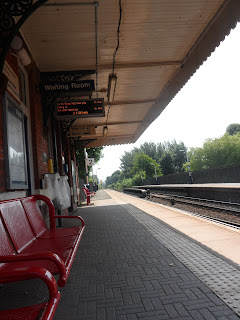 I was headed south, to Rose Hill Marple (sometimes known as just Rose Hill).  It's one of those odd little stubs that has somehow managed to cling on in the 21st century.  The railway line used to continue beyond the station all the way to Macclesfield, but it was a mostly rural route that couldn't compete with the more direct line via Stockport.  Most of the old railway line is now a footpath, but Rose Hill's high commuter numbers gained it a reprieve.  Now it's a one station spur for the drivers to turn a train around in. 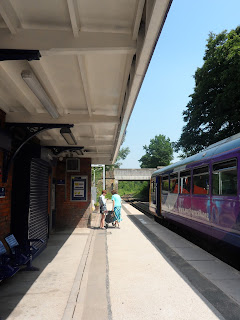 It can't compete with its predecessor, with a single track and a closed ticket office, but it has a little car park and was fairly busy for a Saturday lunchtime. 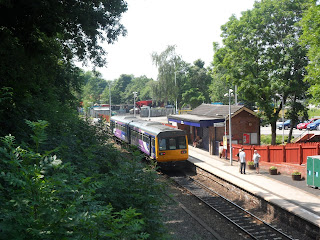 Up on the road bridge I found a station sign.  I've reached the stage where I've no idea what's going to be on one of these signs when I'm in Manchester.  The TfGM logo?  GMPTE?  Some variation on Regional Railways?  There's no consistency, once again reminding me that the local transport executive doesn't view the railways as a high priority. 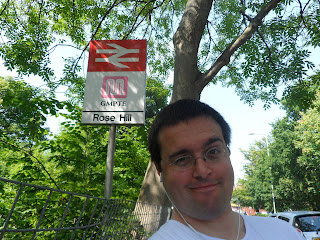 From there it was a stroll into Marple itself.  I feel like that should have a "Miss" in front of it, to be polite; I don't approve of ITV's sudden use of Agatha Christie's Marple.  The venerable Jane would give you a very frosty look if you addressed her by her surname alone.  Mind you, there's an awful lot about the ITV adaptations I don't approve of, from the outrageous levels of ham acting, to the fondness for surprise lesbians, to perfectly good Agatha Christie thrillers having Miss Marple forced into them where she doesn't fit.  I'd rather they simply invented new mysteries for her than squeeze her into Why Didn't They Ask Evans?

That's not a complete tangent, by the way; there is a legend that Christie took the character's name from the station when her train was delayed here.  I suspect the canny hand of a marketeer, eyeing up Heriot Country in Yorkshire and trying to claim some of those tourist pounds.  Despite this, Marple wasn't a bad little place.  The locals seemed to be proud of it at least: three shops in a row were named after the suburb (Marple Flooring, Marple Express Pizzas, and the Marple Fish Bar).  In fact I saw the word Marple so many times it began to lose all meaning. 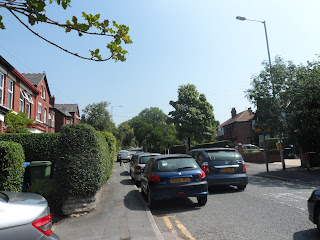 A left hand turn took me into Station Road and an avenue of brick homes and high trees.  It was a prosperous, well-appointed village.  This may be betraying my adopted Liverpool home, but there really are some lovely parts of Manchester.  The city centre's a bit generic, but places like this, or Romiley or Didsbury, made me understand why so many people wanted to move there. 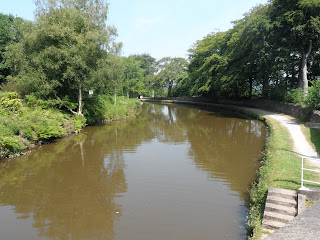 A set of locks, incongruously at street level, alerted me to the canal bridge.  It was strange to see all this water so high in the hills, with a view of the peaks off into the distance.  I guess that's why there were locks. 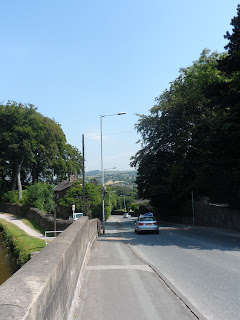 The canal also meant I was approaching Marple station; as happens so often, the trains had followed more or less the same route through this part of the world.  This station is unashamedly modern, constructed in 1970 on the demolished remains of a much older building.  Strangely, the fact that they didn't bother doing the same thing at Rose Hill probably indicates how little they thought of it, whereas now it's more of a source of pride that they still have a Victorian station. 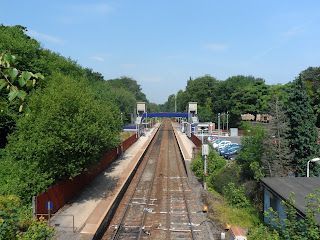 I walked down some steps into the extensive car park, past a metal crate on which someone had scrawled art exhibition and an arrow.  I hadn't seen anything on display, so either the sign was out of date or my comprehension of modern art is hopeless.  The station building was a squat little bungalow at the far end of the car park, barely visible amongst the vehicles. 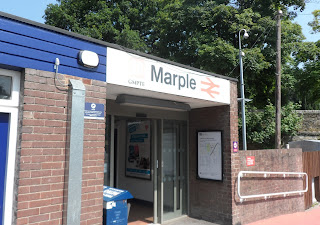 I'm guessing the facilities inside were less than ideal for the staff, because the automatic doors had been wedged open to allow what little breeze there was to pass through.  I imagined the man at the ticket window was probably wearing shorts under the counter.  If that. 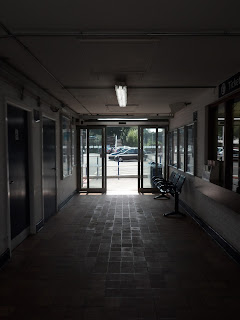 I took a spot on the platform to wait for the Sheffield train.  This was the last of the day's "town" stations; from here on it would be countryside all the way.  In the blistering summer heat, that was a real relief. 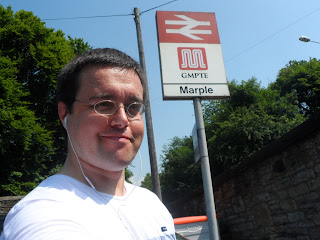 A very interesting article, have you considered also visiting old, disused/ freight railways, North Liverpool is rich with them, the North Liverpool Extension Line, that ran through West Derby and Childwall, and the current freight line that runs thought Tuebrook to Liverpool Freeport?

"It began to lose all meaning."

The freight lines are actually on my "to do" list but I never seem to get round to them.