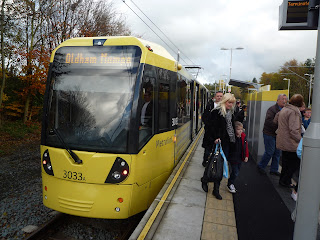 Trams are great, aren't they?  Everyone loves trams.  Even the most miserable, Thatcherite, Clarkson-worshipping imbecile gets a little smile on their face when a tram comes tootling round the corner.  Especially if they blow their little whistle as they do so.

Manchester is, of course, the capital of British trams (sorry Blackpool), and its lovely Metrolink system has recently opened a new extension to Oldham.  As Ian was up from That London, he and Robert and I headed over to Victoria so we could ride the new line.  We avoided the gentleman enjoying the men's toilets a little too much and clambered aboard a bright yellow tram.

The noise of the new trams is a wonderful thing: an electric whoosh, a slipping, sliding hum that flows through you.  It's second only to the noise of the Jubilee line trains in the list of "unexpectedly lovely noises on public transport", and certainly beats the wailing of unattended children and rap music played through a mobile phone speaker.  Sadly, we couldn't get seats on the hinge - the best place to be on a tram: FACT - and instead settled for one end.

The line to Oldham used to be a railway line, and it shows.  The tram doesn't go through busy streets, but instead rises above them on viaducts, or beneath them past grassy embankments.  We were separate from regular traffic, allowing us to get some decent speed, before we finally terminated at Oldham Mumps. 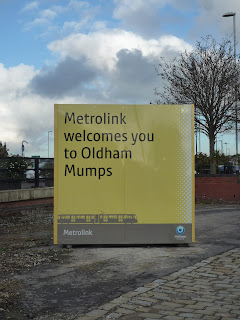 My favourite thing about Oldham Mumps is that everyone calls it Oldham Mumps, as though that's a perfectly normal name for a station.  It's in the Mumps area of Oldham, which, according to Wikipedia, comes from an old name for beggar but... come on.  It's mumps.  It's big swollen necks and only being able to eat ice cream and soup and getting a couple of days off where you get to watch The Sullivans and school's telly (which suddenly becomes fascinating when you're watching it through choice).  If I was Metrolink, I'd have taken the opportunity to rename the stop - Oldham Prettyplace, or Oldham Gorgeous, or something more positive. 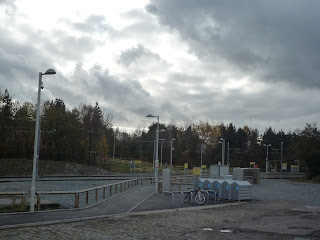 Not that it's that nice at the moment.  This is just a temporary halt.  The plan is for the line to eventually pass through the town centre, into a bus/tram interchange being built over the road, and then on to Rochdale.  Until then, there's a load of gravel acting as the terminus for the line.

We walked into the town centre proper, along a road that was flatlining.  Oldham Mumps railway station was demolished in 2009, and then it took three years of construction before the line reopened.  The effect of that closure was stark.  Yorkshire Street was full of those businesses you get on the way to stations - the chippies, the kebab shops, the down-at-heel bars.  Head to Lime Street in Liverpool or Brook Street in Chester and you'll see the same mix.  Places you only wander into after dark, probably with a skin full of ale, for just a quick doner for the trip home.  Without the station acting as a magnet, that trade had collapsed, and now there were shuttered businesses everywhere.  It had also killed the daytime trade, those odd shops that manage to exist on the periphery of town centres where the Business Rates are a little bit lower - independent bed shops, sari stores, Polish supermarkets.  Yorkshire Street had effectively fallen off the map.

Sadly, the reopening of Mumps is just going to be a temporary fillip to the area.  The Oldham town centre route will go via Union Street, parallel to Yorkshire Street, and then people won't need to come this way at all; there will be four new tram stops in the centre which people could use instead of walking. 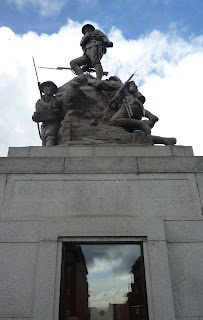 We paused on an elevated square outside the parish church.  Across the way, the Old Town Hall was still going on about Oldham's Olympic legacy; I'm not quite sure what the legacy is, given the town's somewhat peripheral involvement in the Games.  They haven't even got a gold postbox. 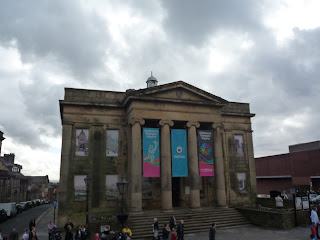 There was something going on.  Crowds were gathering behind tape, leaving the road free.  A parade of some sort.  We debated what kind - perhaps it was a Remembrance Day march, or even Oldham Pride - before Ian's Googling came up with the answer: Santa was coming to town.  Not the proper one, obviously, because Father Christmas doesn't exist (sorry kids) but a man in a big red suit pulled by real reindeer (emphasis theirs).

We hung around to welcome "Santa's Reindeer Army", which involved bagpipers, for some reason.  There is never a reason for bagpipers.  Giant puppet characters and "the stars of the Oldham Coliseum's panto" paraded past, cheering the kids in the front row and handing out sweets.  We didn't get any, dammit. 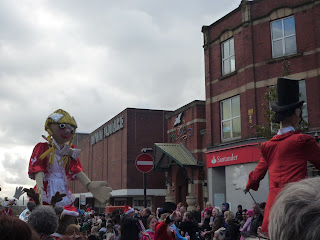 Santa arrived, in his sleigh pulled, as promised, by real reindeer.  The best part of that was the horsey Claire Balding-type who was leading the animals, and who looked distinctly unamused throughout.  Santa waved, the kids waved back and cheered, then an Oldham Borough Council streetsweeper picked up the reindeer poo, and it was all over. 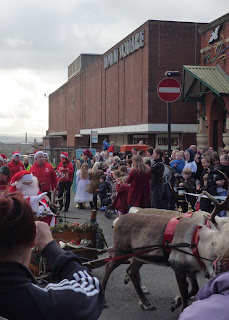 We paused for a coffee and a panini, then walked out the other side of the town centre.  It wasn't going to be all trams.  Since we were in the area, I'd persuaded Robert and Ian to help me collect some Northern Rail stations, and so we had a walk ahead of us to get to the first one.  After nearly being mown down on a pedestrian crossing by an idiot who jumped a red light to turn, we walked down Middleton Road, where we came across the nascent form of a future tram stop. 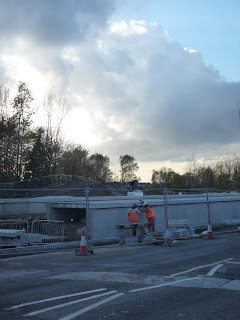 Come 2014, this will be Westwood tram stop, and the entry point into the town centre for Metrolink.  For now, it's just a couple of (surprisingly large) slabs of concrete.

They're great.
Posted by Scott Willison at 12:24

Damn your eyes. Mention of mumps and childhood illnesses, and now I can't get the theme tune to Crown Court out of my head.