Our efforts caught the attention of ITV, and all the blog writers received an invitation to visit the cobbles for real.  A very rare, and tremendously exciting event; since they closed the Granada Studios Tour at the turn of the Millennium it's been closed off to the public.

In a unique two for one, I decided to combine my two blogs together, and include a Tart with the visit.  I was headed for Deansgate, Manchester's red-headed stepchild of a station. 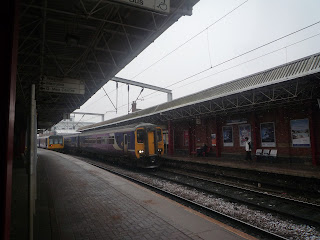 Piccadilly's got the size and importance.  Oxford Road's got the cool wooden building and trendy clientele.  Victoria has the history and the architecture.  Deansgate's just... there.  It gets far fewer services, and is often quiet and empty.

It's not too attractive at platform level, either.  Too much red brick, too much modern "improvements" that have dated badly.  The metal struts holding up the canopies look tired, the shelters are windy.  Step away from the platform and you encounter the 1980s bridge across the road to the Metrolink station; a bridge that hasn't been maintained at all.  I bet there are all sorts of buck-passing behind the scenes, the tram people asking the train people to clean it, the train people saying it was the tram people's responsibility.  While they debate, the tube gets darker, and mouldier, until it looks like an underwater passageway.  You expect to encounter a barnacle or two. 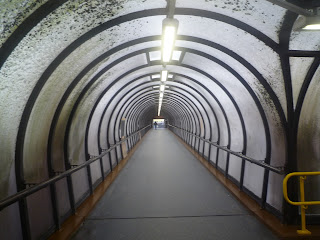 As you head downstairs though, something strange happens.  Deasgate unfurls before you, spiraling open, the tendrils of history gradually rising up around you.  Dull modern steps take you down into a tiled brown ticket hall, lights bouncing off ceramic, shining out at you. 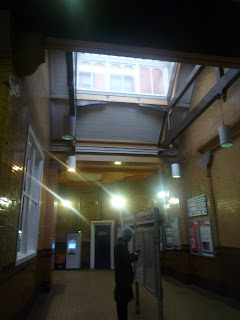 The station's layout's odd and disconcerting.  The ticket hall's at ground level, but at the same time, up some stairs; there's a subway underground which doesn't go anywhere except to the street.  Even here you can see how the station's forgotten about, with signs directing you to Manchester Central's old name, G-Mex.  Indeed, some of the train indicator boards still call it Deansgate G-Mex, pointing out how old-fashioned and abandoned it is. 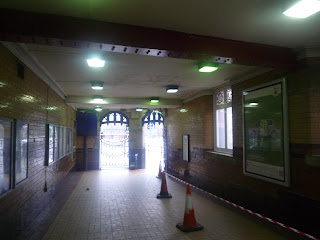 It's romantic though.  It has a wonderful sense of history and Victorian might.  In that lower-level corridor, even the cones can't hide its atmosphere and bulk.  Those metal studded girders, the portcullis entrance gates, those tiles.  It was a delight. 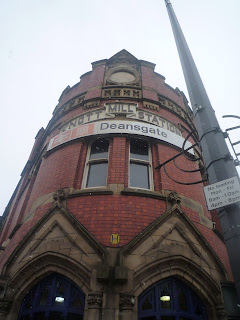 The building's curved to fit the corner, a little feature I always love, and the Victorians once again humiliate the present day.  That tedious white Deansgate sign is nothing compared with the fancy scrollwork of the Knott Mill Station stonework above (Knott Mill was its original name).  Underneath are ironwork gates, which have been violated by Northern Rail purple, but which are still beautiful. 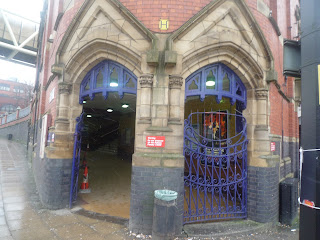 It could do with a bit of TLC, Deansgate.  A bit of a scrub up and a tidy.  So long as it retains that charming sense of nineteenth century style.  I'd hate for it to lose that. 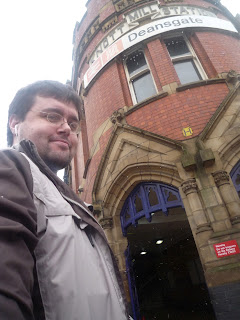 Granada's just round the corner (yes, Granada; I hold no regard for this "ITV Manchester" nonsense).  Soon I found myself actually outside the Kabin, by the Rovers, stroking the astroturf in Sally Webster's front garden.  Sadly there was no sign of a tram - probably for the best - but I did loiter round the bus stop, looking for a Weatherfield Wayfarer. 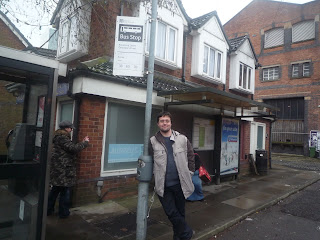 Much to my delight, the bus map has actually got Weatherfield on it. 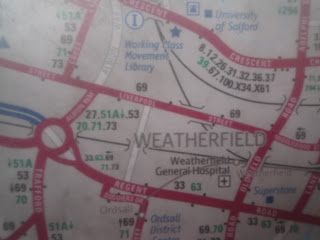 It's a weird little place, the Coronation Street set.  Utterly familiar - you know every nook - but tiny and full of odd little details.  After all, who would even notice that on a map?  Who even cares?  We were allowed inside to the even tinier sets, where, yes, I stood behind the bar of the Rovers.  Because I had to. 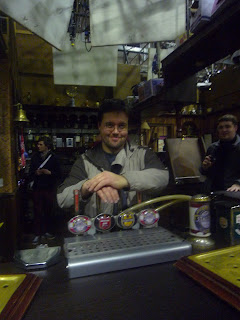 It was a thrilling day, though, and for probably the first time, a railway station was overshadowed by the stuff afterwards.  Poor old Deansgate. 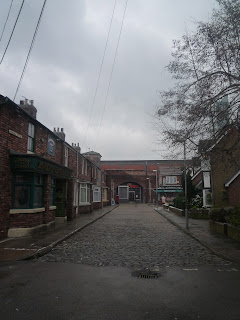 Do you have a bigger shot of the map at all? Would love to find out more about the fictional Weatherfield Metrolink line!

The map appears to be a doctored version of this http://www.salford.gov.uk/d/Salford-network-map.pdf . I would assume that the Wetherfield Metrolink heads south towards Exchange Quay and joins to the Eccles line. It is quite surprising that they go to such detail! Perhaps fictitious tram stop tarting could be a blog post?

Good Lord, is that map still there? I was working for GMPTE when that shelter and stop was first put up, and Granada requested authentic looking materials. In those days, they used to allow tourists on the set, on non-filming days (this is before Corrie was on every day), which explains the level of detail. The boys in the publicity dept did perhaps get a little carried away ...