Even though I count myself as a Tube aficionado, I've never really ventured beyond about Zone 3.  The problem is, once you head out to the extremities, the Underground station becomes the most interesting thing about it.  I'm sure there are some thoroughly charming little streets around, say, Wood Green, but for a visitor all you see is a load of semis and little shops.

I took a bus from High Barnet tube station, at the top of the Northern Line - a disappointing little terminus, just a load of platforms with a tiny box of a building below street level.  I'd planned on walking but there was a bus waiting, so why not?  That's the genius of the Oyster card - it frees you up, makes you feel able to gamble.  The bus traveled through back streets of the district, squeezing between parked cars and making seemingly impossible 90 degree turns, filling me with admiration for the driver.

We pulled up in Cockfosters' specially constructed bus layby.  Right away you got a sign of Holden's clever forward planning; there was a subway straight from there, under the street, into the station. 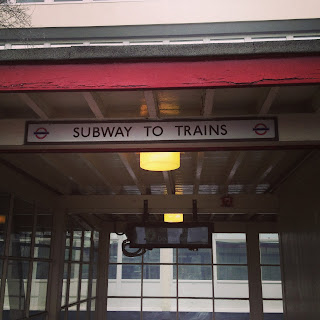 The classic font.  The wide glass windows.  I was already excited.

The station building is surprisingly low.  Holden favoured tall, prominent stations, acting as beacons to attract passengers.  His planned towers were never built, so what we have instead is a long, symmetrical brick building.  The roundels on the end still call out to passers by. 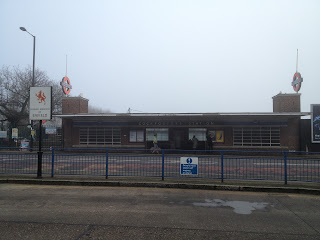 It's actually just a supremely elegant access point to two staircases.  The terminus is below the road bridge, so this pretty building is just the trailer for the main feature. 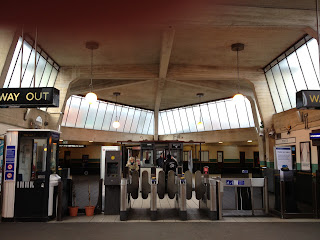 It's just astonishingly beautiful.  A wide open ticket hall with plenty of natural light; cleverly lit alcoves; dark wooden doors and paneling.  It's a masterpiece of simple, understated, good design.  Plenty of room for passengers to flow in and out.  And it's concrete - such a derided, despised building material.  This shows how inspiring it can be if used right, and maintained well.

In the opposite direction is the train shed. 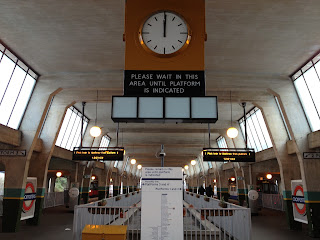 Again, that wonderful symmetry; platforms laid out clearly and simply, easy to negotiate, easy to get to.  All that light and openness.  Not perfect though - that clock isn't working, and neither is the old "next train" indicator.  I know there are modern LEDs further down the platform but... it's not the same.  The building's Grade II listed and I wish this was included in that listing.  A working station clock is an essential. 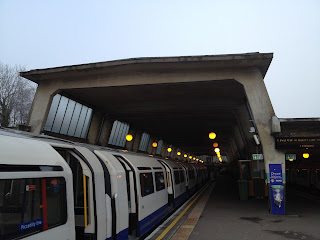 I boarded the Southbound train, ignoring the mad lady who walked into every train, talking to herself.  One day I'll visit all of the gems of the Underground.  One day. 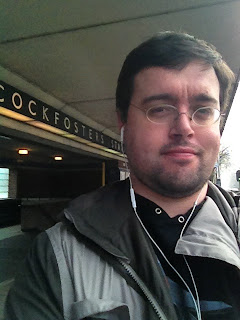 PS: while I was riding up the Northern Line, this young man appeared on Grindr.  If you feel like getting in touch, sir, I'd be happy to explain my fondness for the Underground to you in person. 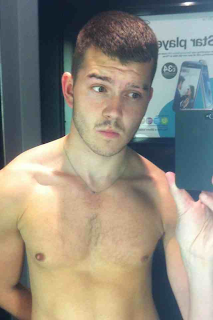 You should do the outer reaches of the Met - Chesham, and Amersham. Quite surreal to be riding Underground trains out in the leafy rural parts.

Do you reckon he's rubbed his top lip stubble with newsprint? Or do the kids of today all use Photoshop?

1) Yes, Chesham and Amersham in particular are well worth a visit, as is the whole of the Met line out that way. If you like Cockfosters, you'll love Uxbridge.

"Thoroughly charming streets around Wood Green". Err...no. If there was ever one London neighbourhood that fails miserably to live up to the promising visions conjured up by it's name, Wood Green is it. (Finsbury Park, too, perhaps)

A second recommendation for Uxbridge. It's similar to Cockfosters, but a bit more developed - stained glass windows and ornamental flourishes, which both fit in really well with the classic restrained Holden design