If you follow my Twitter feed you'll be aware that last week I was at my Mum's for New Year.  I took a train down on the Sunday, but the stresses and travails of Virgin travel started to get to me.  Not even a First Class weekend upgrade and the generous provision of a Butler's Secret "lunch" pack (contents: one stick of chocolate, one biscuit, two crackers and a piece of spreadable cheese) could calm me.

Eventually it got too much for me.  I jumped off the train at a station that wouldn't normally be on the list of calling places - Milton Keynes Central. 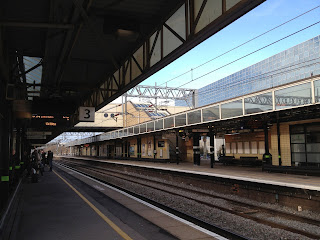 After a few moments composing myself on the platform, getting my breathing under control, I headed for the stairs.  It's not a bad station at platform level.  The practical yellow tiles will never win any prizes for attractiveness, but they discourage graffiti, and there are plenty of waiting rooms and seats. 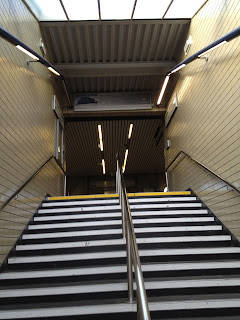 Yes, I know that's comically lopsided; I was carrying a very large rucksack.

Up top there's a long bridge connecting the platforms, the location of the sole moment of whimsy on the station.  The bridge is illuminated by pairs of portholes, letting you stare out at the tracks.  If you want to.  I was far more keen to get out of the station, a situation not helped by the ticket barriers not working.  There were four men hovering around the exit gate, checking tickets at their own lazy pace.  A gaggle of teenage girls were ahead of me, giggling and flirting, and the guards were in no hurry to rush them through. 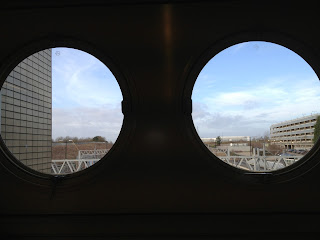 I plunged straight through the ticket hall and out into the open air, to let the chill of the day cool me and stop my nervous sweats.  They'd remodelled it since I was last there.  There used to be a wide open plaza in front of the station; theoretically a kind of central square for the town, in reality a windswept space for skateboarders and roller bladers to chip at with their wheels.  Now, a bus exchange had been constructed outside, cutting down the amount of space available.  Normally I'd hate this kind of intervention, but the old Station Square was such a deathless expanse, I was glad to see it chopped up. 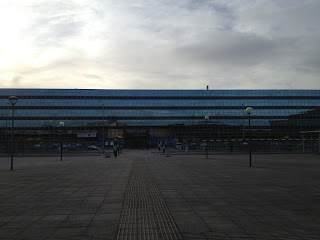 That is the station, promise.  That bland office block houses its entrance, and if there's a more damning indictment of Milton Keynes' lack of architectural skill, I don't know what it could be.  The building - and its twin siblings, to the east and west - could be anywhere.  It could contain anything.  This could be the south-west headquarters of Peroxy Polymers (UK) Ltd, on a business estate somewhere outside Taunton.  It's incredibly dull.

Railway stations are exciting places.  They're centres for travel and centres for communities.  Milton Keynes is so devoted to its road system that it saw the train station as unimportant, sticking it at the far end of the town centre and hiding it under a load of offices.  Nobody understood the beauty and relevance of train travel.

As the bus exchange seemed to have moved, I wandered across the square to find the old one.  I'd spent a long night there once, in 1995, waiting for a bus home after seeing REM play at the Milton Keynes Bowl.  I'd gone with someone I sort of knew through my Saturday job, and over the course of the evening together, we'd realised that we had absolutely nothing in common.  I remembered the bus station as being pretty nice. 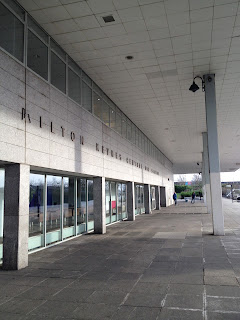 The fine bus terminal had been abandoned, turned into "Buszy", a youth centre.  A total waste of a perfectly decent building.  It did at least give the skateboarders a new home.

I headed back to the station for a coffee in the Pumpkin cafe. 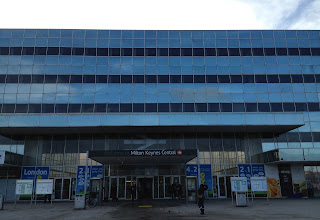 Fans of awful superhero movies might recognise the station building, incidentally.  The infamous Superman IV: The Quest for Peace used Milton Keynes Central station to double for the United Nations.  It didn't convince.  (It also tried to persuade us that the Tube was an American subway system, even though they used the exact same trains, and that Margot Kidder was an attractive youthful woman).  That was a mildly exciting fact when I was a Superman-obsessed ten year old; then I saw the film, and it became a badge of shame.

The interior of the station's as bland and tedious as the outside.  It's a box, with shops down one side and the ticket windows down the other.  Cold marble-effect floor tiles and a high suspended ceiling give it a chilly, unwelcoming air; not the greatest gateway to a new town.

It does have one good feature though. 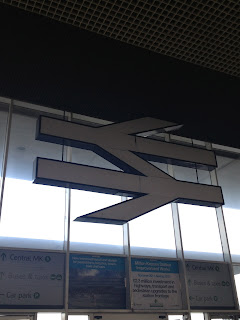 I do love a massive logo. 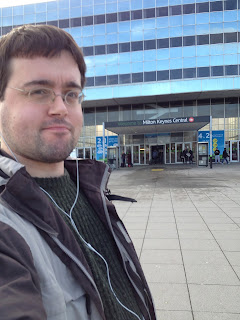 The BR logo is *so* back-to-front there. Where were you, a Sealink ferry terminal?

It's built so you can see it as a shining beacon through the glass to the street outside. It's only back to front inside the ticket hall.

I'm typing this on a bus headed to that very destination.

Milton Keynes, being built in the latter half of the 20th Century, is totally designed around having traffic as the priority. The grid-like system of roads makes any MK map resemble a tennis racket.

What I remember from playing Sim City is that you can seriously relieve congestion by forming your roads like this. An MK traffic jam is about as rare as a Celtic scarf round the neck of Ian Paisley.

The place tended to look futuristic compared to long-established urban stalwarts like London, Birmingham, etc. However, it's missing a soul. I do a lot of work there, and you get vast blocks of open space, alphanumeric acronyms on the road signage. It's like it was designed by robots.