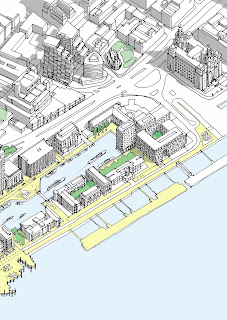 The Mayor unveiled his Strategic Investment Framework (SIF) for the city centre the other day.  This is a guide to what they would like to happen to Liverpool over the next fifteen years or so.  It's a guide to aspirations, a list of problems that need addressing, and a wish list.  There are plans, for example, to stop the Strand from being such a barrier to movement (trees and pink street crossings).  There are schemes for "great streets", with Lime Street getting the overhaul it desperately needs and a new square between the station and St George's Hall.  The Baltic Triangle is finally being included, and knotted into the fabric of the city centre properly.  It's all interesting stuff.

From a Merseyrail perspective, the SIF acknowledges a seemingly obvious truth: having trains whizzing underneath the city centre every five minutes is a real asset, and one that isn't properly used.  The report says that the "underground" (their words) should be opened up more effectively, with a new station at St James.

I visited the St James site a few years ago.  It has two big assets: firstly, it breaks up the long gap between Central and Brunswick with an intermediate station.  Secondly, there's space for the platforms.  St James was closed over a hundred years ago but the open cutting it was sited in is still there.  There it is, on Google Maps:

And there, on that same map, is the problem with St James: it's on the wrong side of Parliament Street - four lanes of fast moving ring road.  It's cut off from the city centre it wants to serve.

The solution, of course, would be to build the ticket office on the other side of the road, with passages passing under the road to the platforms.  There's even an open patch of land sitting there for the station building.  Any time you build underground, though, the cost goes through the roof, so this probably won't happen.  Instead there will probably be a station on St James Place, with a cheap footbridge and lifts, and another of those "super crossings" over Parliament Street.

My own personal preference would be an entirely new station that doesn't use the St James infrastructure: a brand new station at Chinatown, a little bit up the road.  Somewhere like here:

There are two triangles of land there, on Great George Street, which sit directly over the top of the Northern Line tunnel.  Those would be a much better spot for a station, as they're actually within the ring road, they're close to Chinatown, the Baltic Triangle, the top of Bold Street and the cathedral, and they're vacant.  And if you're in true fantasy network mode, they're much closer to the disused Wapping railway tunnel, which passes under the site - handy if you ever want to reopen it for rail traffic out to Edge Hill.

(I'll stop fantasising now and get back to reality.  Sigh).

If St James wasn't there we'd still be saying there's a need for the station.  That big empty cutting is distracting us all - why don't we think about where the need is, instead of what we've got to hand?

Moving on.  The other suggested station is somewhere between Central and Sandhills, another long stretch of the Northern Line without a station.  Merseytravel have long suggested a station called "Vauxhall" here - I can't see that name lasting beyond the planning stages; one station sharing its name with a major London terminus (Waterloo) is fine, Merseyrail, but two would be pushing it.  The line's on a viaduct here, which would make it tricky to build, but it's also surrounded by cheap industrial land so the cost is a lot lower.

Of course, all that cheap industrial land is precisely why they haven't built it.  It's chicken and egg - if they build it now, no-one will use it, but until they build it, no-one will want anything round there except grimy workplaces.  This is all predicated on the ambitious Liverpool Waters plan happening - and I'm not holding my breath. 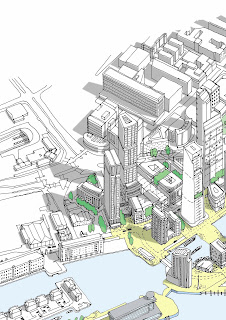 In other, smaller pieces of info, the SIF seems to have given up on Merseytram (plans for Dale Street and the Strand make no mention of leaving space for tracks) and Moorfields is marked as a major site for investment.  The latter is particularly exciting, as God knows it's awful round there right now.  There's a big commuter station right there, with thousands of people passing through, but for some reason the only development round there is a scrappy car park and a "Private Shop".

The biggest problem with the whole of the SIF is that it's aspirations.  No-one's got any money any more, not the Council, nor the developers.  Things like demolishing the Hunter Street flyovers so that the back of the museums becomes a new, open square?  Marvellous.  We can't afford it, but it's a great idea isn't it?  Basically, cross your fingers and hope for the best.  It might be all we get.

Images taken from the SIF report.  You can download the whole thing here (registration required).
Posted by Scott Willison at 13:25

Email ThisBlogThis!Share to TwitterShare to FacebookShare to Pinterest
Labels: futures