Thanks to an afternoon with Robert, I believe I now know what it's like to be a parent to a toddler.  "Are we there yet?"  "Do you know where we're going?"  "We've walked miles."  "Not more walking."  On and on, the bleating of a whining infant in my ear, as we headed out of Oldham town centre and towards Mills Hill station.  Ian, for his part, may have had just as many complaints, but he had the good grace to keep quiet about them. 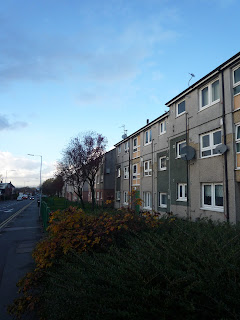 To be fair to Robert, Middleton Road is really rather dull.  A minor rain shower piddled on us as we progressed down its long, utterly straight length, passing less-than-ideal housing and the occasional shop.  There wasn't much to surprise or intrigue as at first, but a gap in the buildings gave us our first architectural ruin: a silhouetted mill, long closed. 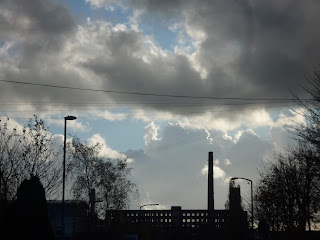 As we would soon find out, the ruins were the beauties on this road.  We'd passed into Chadderton, a mill town now swallowed up by Oldham, and its former wealth kept popping up in ever more parlous states.  The town hall clung on, reborn as a registry office, with dull municipal-font signs pointing the way for "ceremonies" and plenty of room for the Rolls to drop the bride off outside. 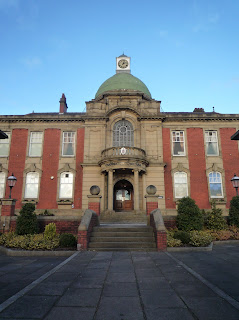 It was the start of a run of fine civic buildings, but sadly in a much more depressing state.  A beautiful ironwork sign proclaimed Chadderton Library, a Carnegie library at that, but the building was empty.  The actual books were now in the "Chadderton Wellness Centre", which is a place I'd quite like to burn to the ground just for that bloody awful name. 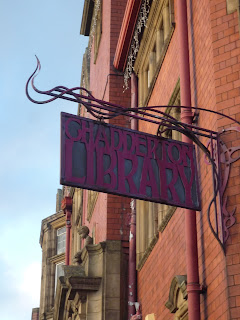 At least that building has a future, albeit as glorified offices.  The wonderful Art Deco swimming baths next door are marked for demolition, after repairs were declared too expensive.  People do still swim, don't they?  It's not something we've all forgotten how to do, is it?  It seems that it's regarded as a frivolity, a luxury in our days of ever decreasing Council budgets and ever larger cuts.  At a time when Wirral Council is proposing getting rid of lollipop ladies and refusing to cut the grass in parks, a swimming pool seems like an indulgence. No matter how useful, how healthy, how necessary it is.  It makes me incredibly depressed. 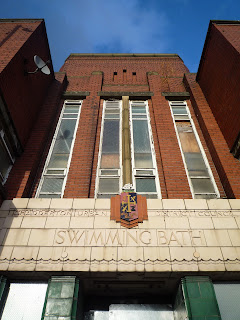 Never mind, there's a big Asda just over the road, so at least we can eat shit food on our way into hell.

We pressed on, a little down hearted.  Fortunately Robert was almost caught staring into someone's front room, so that cheered us up.  We'd all agreed that staring in people's windows as you passed was fair game - if they haven't put nets up, what do they expect? - and we'd seen some truly spectacular pieces of tat on windowsills en route.  Robert had taken it a bit too far, though, and actually stopped in his tracks to read a sign on a house - not noticing the burly man admiring the hustle and bustle of the passing scene from inside.  Our footsteps were just a little bit quicker then in case he decided to object to our nosing in person. 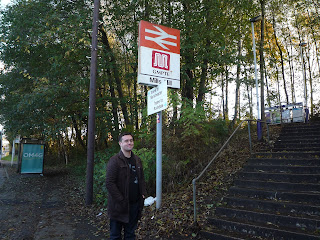 Still, it got us to Mills Hill that little bit quicker.  We shared the platform with a gang of rowdy men who were clearly preparing for a night out in Leeds.  They had carrier bags full of beer to sustain them on the long arduous journey, which would normally irritate me, but one of them was quite fit so I just had a bit of a perv and then we went to a different carriage. 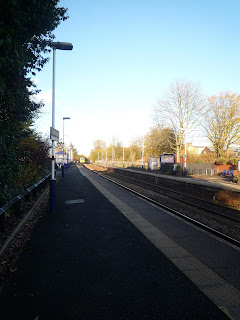 At least it had a decent sign.  Our next station, Castleton, just had a bit of board on the bridge over the tracks.  Not very impressive at all. 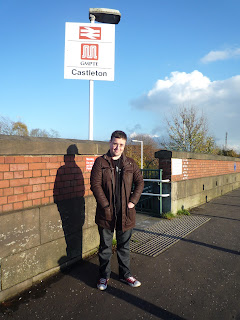 When you get round to replacing this with a TfGM sign, Manchester, I expect something more impressive.

Castleton might be the most wonderful town on earth.  It might be filled with buildings made of ivory and gold and all the residents are supermodels.  I wouldn't know, because I spent the whole time staring at the pavement, avoiding the mountains of dog faeces that were freely distributed across the place.  There were piles of the stuff.  Are there no plastic bags in Castleton?

Soon we were approaching Rochdale itself, and the turd count plummeted.  Our relatively quiet main road turned into a storming dual carriageway, so we took a side road towards the station.  It was exactly what you'd imagine if someone said "Rochdale": shiny red terraced houses stretching away from the eye in straight lines.  A couple of kids passed us, their delicate Asian features seeming unlikely hosts for outrageously strong Northern accents. 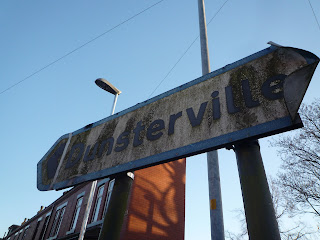 I'm not entirely sure what Dunsterville was, but they seemed keen for us to find it; there was another sign on the next street corner.  They hadn't cleaned that one either.

The glass minaret of a mosque rose up over the terraces as the light began to fade.  We turned back under the railway at a row of shops, passing up the opportunity to eat at Cheeky Chicken (Love chicken?  Love Cheeky Chicken!) or Chill-Grill (Grill of a Lifetime!). 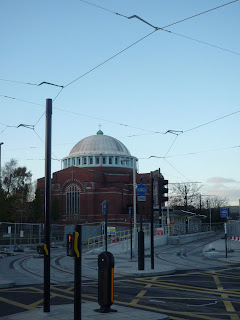 The tentacles of the Metrolink were stretching out here, too.  A stop for the Rochdale extension looked pretty well-formed to me, even though it's still a couple of years away from being used.  I was surprised that the stop was outside the station though.  The route from Oldham to Rochdale is another former railway line, and I didn't understand why they weren't just using the same old facilities.  It's actually to stop the trams from having to cross the mainline railway which seems, you know, sensible. 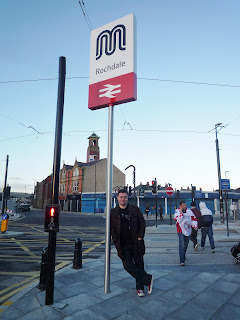 From the outside, the station's drab and uninspiring, but it's subtly lovely inside, with a polished wooden roof and glass-walled waiting facilities.  The loveliest thing of all is a clock commemorating the Rochdale Pioneers, fathers of the co-operative movement and the first people to be "gud with fud". 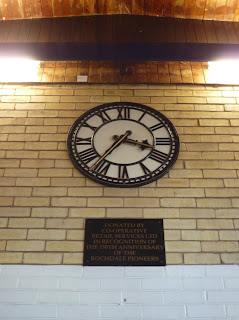 We had a bit of a wait for our train; there was one that headed straight for Manchester, but we wanted a stopping service so we could cram in one last station before the light faded completely.  We took up spots on the bench on the platform, shivering a little at the cold. 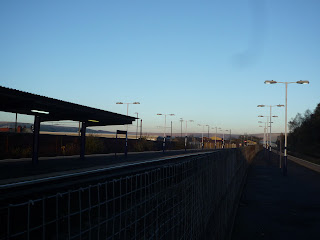 I got excited for a moment, thinking Rochdale at least had an ALF, but no, it had one of those crappy corporate signs.  I shall have to come up with an acronym for them.  I don't think it will be a polite one. 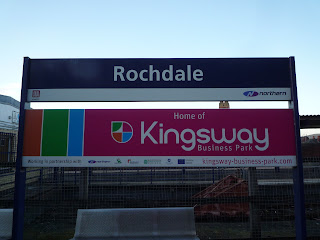 With the sun dying rapidly, we raced south, past Castleton and Mills Hill and back into Chadderton to alight at Moston station.  There was a pleasing mural welcoming us.  All very nice, but painting a picture of a gleaming Eurostar when you've just climbed off a rattling Pacer is kind of rude. 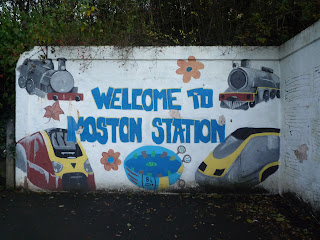 That wasn't the true delight of the station.  Moston had not one, but two signs outside.  I know.  Too much.  I couldn't contain myself. 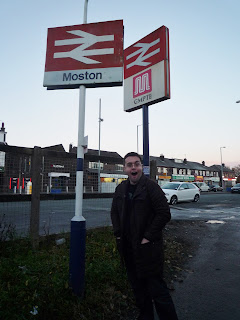 And that was it: four stations safely tucked away.  I feel a bit bad about not really experiencing the full joy of Rochdale town centre, but there are still a couple of stations beyond I haven't got yet, so I've got to come back.  Plus, of course, the tram will be here soon enough, so that'll be fun.

We trudged back to the Metrolink line at Hollingwood, gawping at the enormous televisions some of Chadderton's residents had on the wall (they must all have the worst eye strain). 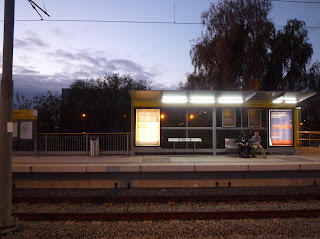 There was more to the evening of course; Ian had schlepped all the way from London, so we fully intended getting our money's worth out of his company.  There was food, and beer, and jokes, and some fairly rude comments about the people at the next table in the restaurant, but I'll draw a veil over it to protect the innocent.  I'll just leave you with this photo and let you imagine the rest by yourself. 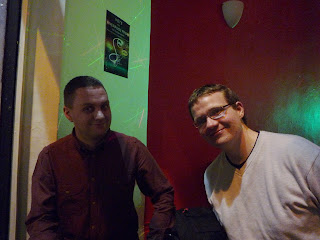 ...and link to Masterplan,

That looks like a fantastic plan and it would be great to see the mainline and heritage lines side by side. It's always disappointing when the only way you can get to a railway is by car!

I keep meaning to pay the East Lancs a visit. I was a bit put off by all that business with the Nazis last year, but they seem to have banned all that, so I won't feel guilty about attending any more!