In all the excitement of my Wales trip and the first flowering of my Northern trips, I've sort of ignored Merseyrail.  It's meant I've missed out on a whole bunch of stuff, so consider this a round up.  A John Craven's Newsround covering the Merseyrail events that have interested me. 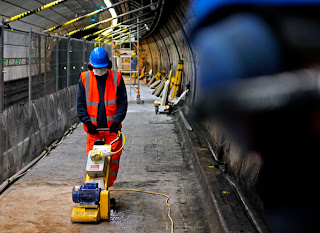 This is of course the biggest thing that's happening on the network at the moment.  The shutters are still down at Liverpool Central, and will be until at least the end of August (for the Wirral line).  The website at Love Liverpool Central is doing a good job of posting interesting updates, including photos like the one I shamelessly stole above.

I was in Liverpool early last week and took a wander through the shopping centre.  It was an eerie experience - eight o'clock on a weekday and I could hear the echo of my own footsteps.  The dullest job in the city must belong to the two chaps posted at the entrance, whose entire task is simply to redirect people.  They were stood by the barricades in fluorescent jackets, chatting away.  By this point pretty everyone who needs to use the station must know it's out of action, so presumably they spend all day doing nothing but drinking coffee from Greggs.  Incidentally, I noticed that their stock of sandwiches and snacks was severely reduced - presumably the lack of footfall has destroyed their trade.  WH Smiths hadn't even bothered opening before nine am.

The Echo has been allowed below ground for a look (presumably my invite is still pending) and it seems like a pretty comprehensive rebuild.  Am I alone in quite liking the stripped back brick look?  The works have also given me a new game to play when passing through on the Wirral Line - there are markers on the wall, (showing distances or something, who knows) but which look like years.  You can pretend you're travelling forward in time.

(Alright, I was drunk when I spotted it).

I got an e-mail from One Card Liverpool, the money off scheme I never use, asking for volunteers to trial the Walrus Card.  They wanted people who could use the card for their commute for a month so they could be monitored and evaluated.

I was halfway through filling in my application when I noted that they only wanted people who used certain bus companies or the gated Merseyrail stations (the city centre, plus Hamilton Square, Conway Park, Chester and Southport).  I was very disappointed, as I'm sure you can imagine.  Frankly, I would have done the trip every morning just so I could play with a Walrus (that sounds wrong).

The other disappointment is that they're testing on the stations that already have the technology in place.  Shouldn't there be Walrus points appearing at the other stations by now?  Perhaps just a trial one at, say, Ormskirk or Kirkby?  It doesn't look like the proposed timeline for its introduction is going to be kept to.  Shame.

Speaking of technology, the Post reported that Merseyrail were looking at introducing wifi on the stations and trains.  If I'm honest, I'm not really bothered by wifi at the stations.  Can you not wait until you reach the surface to Instagram that picture?  I was just in London, and though it was novel to surf the net at Euston Square, we were only there for five minutes before our train arrived.  I can live without my Twitterfeed for that long.  Trains on Merseyrail are, at worst, every fifteen minutes, and if you can't go fifteen minutes without updating your Facebook status you have a problem.  And most of them are above ground anyway, so you should get a half decent mobile signal.

Wifi on trains is a different matter: putting your laptop or tablet in the loop on your commute could add an hour or so to your working day.  Or you could just have some gentleman's time en route; it's up to you, though I imagine the person in the next seat might complain.  I can't see it happening until the new trains arrive though, towards the end of the decade.  If you're going to fit new technologies to the existing cars there are far better things you could spend your money on (e.g. heating that doesn't operate at surface of the sun temperatures in August).  So I'll file this one under "nice but not really that exciting".

In the last few days, the results of the nationwide passenger survey were announced, and Merseyrail got an astonishing 96% satisfaction rate.  It's the highest in the country, and way above average.  Kudos to them.  I might be biased, but I do think they do a very good job.  To celebrate they handed out "Golden Tickets", a lottery which could have seen a lucky commuter get a guided tour of a factory by a weird pederast free Railpass.  Even this pleasant gesture didn't go down well with everyone, as evidenced by this person on my Tumblr dashboard: 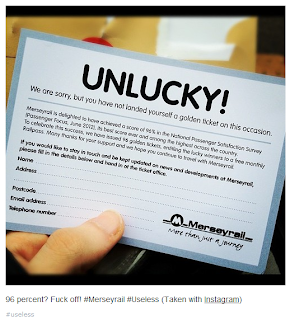 I sometimes wonder what people expect from a rail company.  Ermine seats?  Conveyance to their front door?  A blow job at Freshfield?  It's like when the punctuality figures come out - they'll regularly show that Merseyrail is the best in the country, but the Echo will be beseiged with comments about how they were on a train the other day and it was cancelled and they had to wait at Rock Ferry for half an hour for the next one and nobody was any help and it was ridiculous.  Fair enough, that was a bit grim for you (and it's happened to me in the past), but what about the other trips you take?  How about all the commutes where the train didn't break down?  Where it got you home on time?  It's not like they do it deliberately.  They don't make the thirty-year trains break down just to annoy you.  And seriously, try commuting in London.  I have someone on my Twitter feed who regularly complains if he can't get a seat on the train home.  Some people have worked in London for twenty years and never even seen a seat on a Tube train.  They don't know they exist.

Basically shut up and stop whining.  That told you.
Posted by Scott Willison at 19:35

Email ThisBlogThis!Share to TwitterShare to FacebookShare to Pinterest
Labels: Merseyrail, odds and sods

Surely it would be far more worthwhile and useful to install whatever would be necessary to introduce mobile phone signals into the underground rather than wifi? They've done it in the Mersey Tunnels.

This kind of post is the digital equivalent of those factsheets you could send off for at the end of BBC schools programmes.

I mean this as a compliment.

The markings on the side of the bare tunnel are most likely distances in miles and chains from the notional zero post (Mann Island Junction).

The reason for wifi and not mobile telephone signals is usually to do with security: the (supposed) threat of remotely-triggered bombs set off by calling a mobile phone. The same reason was given for official reluctance to articulated trains (as now seen on LU and LO) where you can see all of the way down the train: nothing to impede the progress of a bomb blast. They got over that in the end, obviously.

I was once quite surprised when my mobile started ringing whilst I was waiting on the Northern line platform at Central. I actually wondered if they had installed devices to pick up gsm signals.

On an unrelated subject, is it just me who thinks this image - http://loveliverpoolcentral.com/images/slider5.jpg - on the loveliverpoolcentral homepage, has been purposely squashed down to make it look like the new Wirral line platform is going to be wider?

I've also had the occasional signal at Central, depending on what way the wind blows. It's a very shallow little tunnel, remember - there's not much between you on the platform and the street above. I'd prefer there to be mobile dampeners on the network rather than boosters but that's because I'm a miserable sod who hates hearing people bellow down their Nokias.

I think the weird stretching is less to do with presenting a positive image and more to do with a very lazy Photoshopper at Rail House. If you look at the far end of the platform you can see they didn't bother removing all the brown plastic seats. It must've been a Friday afternoon job.