The point of this new quest - the point of all these journeys - is exploration.  Yes, part of it is acquisition - my need to tick everything off a list, the satisfaction of putting a line through a name on a map - but at heart it's about going to places I've never been.

I nearly went to Morecambe.  A Lancashire Day Ranger and a trip up the West Coast Main Line.  Then I thought: how boring.  How predictable.  A ticket I've used a dozen times.  A line I've been on a thousand times.  So I went East.

Scarborough and Liverpool have been twinned by the railways - harbour towns on opposite sides of the country, with First TransPennine Express shuttling between them.  It seemed like a suitably epic distance to travel.  Right across Britain to a place I'd never visited before.

It meant a very early start.  We live on a vertical island, tall and thin, with long lines of transport running from north to south.  On top of that, the Pennines form a tall spine down the centre, blocking the way.  It means that while you can get all the way from Glasgow to London on whizzy, modern, electric trains, the east-west are still run by manky old diesels.  Even the newly announced electrification plans will only get trains from Liverpool to Manchester, with a possibly-maybe extension to Leeds someday.

It meant that it would take my train more than three hours to do the 150 miles to Scarborough.  If someone had boarded a London train at Lime Street at the same time, they'd have been treating themselves to a full English in the shadow of Tower Bridge while I was still chugging on my way to York.  It changes how you view the country - in your head, that narrow strip above Wales and the Wash suddenly feels fat and bloated and impassable. 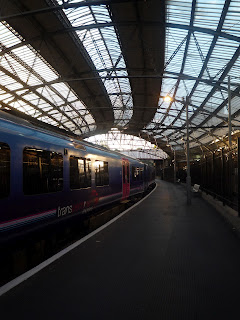 Six fifteen, and the train's engines ground into action and took us out of the station.  It seemed to cough and splutter as it went, as though it was still adjusting to the early hour itself.  I have to confess that I'm prejudiced towards First TransPennine Express.  The name's too long, and has too many capital letters in it.  I also have a suspicion about bus companies that decide to buy a rail franchise.  I think they look at trains as less-flexible buses, and treat them and their passengers a little disdainfully.  But this train was at least clean and cheerily purple.

I wasn't in my reserved seat.  The computer had bunched all the reservations together in Coach C, meaning that I was squished into a backward-facing seat next to someone boarding at Huddersfield.  Instead I found a space in Coach D, two rows back from a man with Duelling Banjos for his ringtone.  He started to slowly, laboriously, annoyingly write a text on his dated phone.  No-one had turned the keypad sounds off for him, so we all got to hear him tediously tapping out his message.  Beep-beep-beep-pause for thought.  Beep.  Beep.  Beep-beep.  Pause again.  Beep.  I wondered idly if I could garrotte him with my headphones, like Necros in The Living Daylights; they're only cheap Sony ones though so they'd probably have snapped halfway through.  I expect international assassins go to a special shop for theirs.

The conductor comes through, inappropriately cheerful for this time of the morning.  She's very pretty but hidden behind thick-rimmed glasses and with her hair in a severe bun; she looks like the "before" part of a Plain Jane Superbrain transformation.  She checks my ticket and exclaims, "Ooh, you're going all the way!", completely missing the innuendo.  "You'll have finished that book by the time we get there." 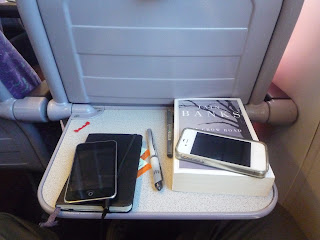 The familiar stations pass by - South Parkway, Warrington Central, Beechwood, Oxford Road.  After Piccadilly I enter the unknown.  The last time I'd been beyond Manchester by train was in 1998, on a trip to the NUS LGB conference in Leeds.  I had other things on my mind instead of taking in the rail side vistas.  I'd like to say we were planning our conference, deciding what plenary sessions to attend  and having a serious political debate, but actually we were wondering where we could go for a night out and what kind of shops they had there.

In Stalybridge and Huddersfield, the train stopped being a cross-country route and became a commuter train.  Suits came on board, tapping at Kindles and playing games on smart phones.  Most of them could get a seat, but a few were left standing by the doors.  I was glad I'd boarded at the start of the trip.  We passed through the odd tunnel as we rose higher and higher into the Pennines.  Sometimes I could see out through the dirt-encrusted window and catch sight of trees, green valleys, lakes.  Tiny mill towns with brick chimneys puncturing the clouds sat at the bottom of ridges and slopes.  The morning sun bounced off reservoirs and fractured.

At Leeds, the train more or less emptied, and we continued.  This was real virgin (not Virgin) territory for me now.  I'd never been this far east on a train before.  You'll clutch your pearls in horror, but I've never even been to York, never mind visited the National Railway Museum there.  I've always said we'd give it a decent visit, a long weekend where we can do it justice.  A day in the museum and then a couple of days to enjoy the city.  Somehow it's never happened.  One look at York station's epic architecture reminded me what I'd been missing.  (Though why are the station nameplates all left-aligned, instead of centred?  It just doesn't look right).

The passengers at York were day-trippers and holidaymakers.  As we crossed the Ouse they settled in, stowing their cases in the ends of the carriage, unfolding bags of snacks and drinks for the journey.  The trolley boy passed through, Polish, cocky, chewing gum incessantly as he poured out coffees.  I'd brought a bottle of water from home, so I didn't partake, but I did get an appreciative glance at his backside as he passed.

Beyond York was a long section of nothing, just countryside and fields, no stations or stops.  We seemed to be travelling far out, away from everything.  Then the computerised voice made her announcement, and I unfolded myself, a little stiffly. 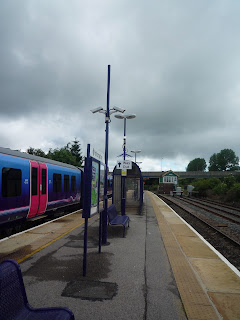 I wasn't at Scarborough, but instead on its outskirts.  I'd got off a station early at the little junction at Seamer.  Yes, Seamer.  I'd like to state right now that I will give one whole pound to anyone who is willing to alter the sign there to say Seamen (or even better, Se men).  Come on, kids of Yorkshire!  You can do it!  All you need is a chunky felt and some Tipp-ex*. 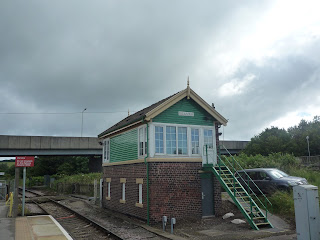 Seamer's where the Yorkshire Coast Line, which I'd be exploring later, and the main route split.  It's an ordinary little station, but it had something I'd never seen before: a magnetic gate.  There's no steps to get you from the island platform to the exit, just a barrow crossing, which could be dangerous with such large trains passing through.  To protect passengers, they've installed a gate on either side of the line, with a lock that activates whenever a train is close by.  It's a good idea, though it lead to an awkward moment as a woman and I were penned in waiting for the train to leave.  It was one of those situations where you're not sure whether you should be making small talk or not, and you can feel the tension rising as you both mull the question over in your head.

Finally the lock pinged and we were free to cross to the road.  The station building's been turned into a house, which is a shame, because it's a lovely large building.  It was a simple design, but pleasingly symmetrical, and quite elegant.  Its proximity to the railway was obviously a plus for the current owners, too, because they'd put up a few old-fashioned railway signs as decoration.  I say, "the current owners", but I probably mean "the husband, while the wife rolls her eyes indulgently." I paused in the little cul-de-sac and took my station sign photo.  That was it - my north east England cherry had been popped.  I had collected my first Yorkshire station.  Just another hundred or so to go... 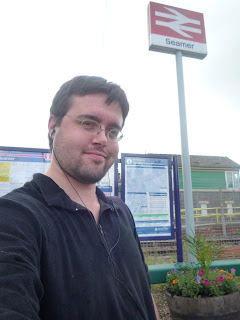 The station signs at York are all left-aligned because the National Express branding was on the left and the cheap way to debrand everything (which NX had to do at their own expense as punishment) was to make the vinyl stickers only as wide as the word "York" and stick them directly over the pissy grey diagonal stripes logo.

Typo! I've got Merseyrail on the brain :)