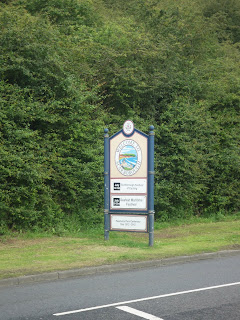 Scarborough hides from you.  Most seaside towns can be seen from miles away, as the land slopes downward to the beach.  You'll come over a hill and see a nice bit of sand, or the top of a big dipper, or at least some waves.

Scarborough does none of that.  Walking into town from Seamer, I didn't get any feeling that I was getting close to the North Sea.  The land went up, with tall tree covered hills all around you.  They form a ring around the town - sentinels blocking off any prying eyes. 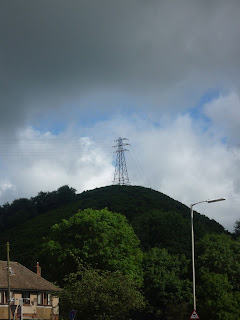 It means the railway and the road are funnelled into a narrow pass.  I was the only pedestrian, with a busy, packed highway to my side.  There were plenty of signs begging the tourists to use a dedicated Park & Ride facility instead of trying to park in the town; no-one was bothering though, preferring to queue to get that little bit closer to the front.

I squeezed through Yorkshire's version of the Khyber Pass and into the outskirts of the town.  The road was lop-sided.  On the left were fine Victorian villas and rows of elegant brick terraces.  On the right were factories, car showrooms and retail parks, all backing onto the railway lines.  A Magnet Trade factory smelt of wood chippings and sawdust, immediately transporting me back to my old CDT classroom. 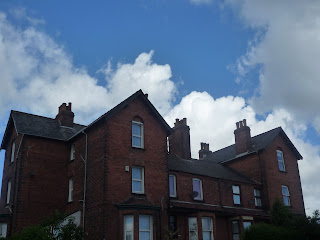 The town gathered up around me and I was soon climbing uphill again, wondering if I'd ever reach something resembling a centre.  Shouldn't I have reached the coast by now?  The houses were ringed by tall trees in full leaf, and the B&Bs that I saw were surrounded by neat gardens and had window baskets on the go.  It was quietly elegant, discreet, the sort of place I could imagine 1950s bosses bringing their secretaries for dirty weekends.  You could have a very classy affair here. 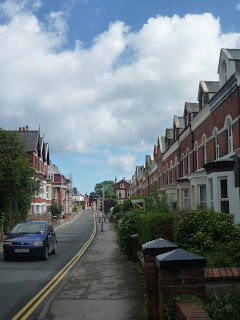 I hit the town centre and got two icons for the price of one.  On the right was the station, which I'd return to once I'd had a look round.  On the left was the Stephen Joseph Theatre, a converted cinema which now serves as the home for all Alan Ayckbourn's new plays.  My only knowledge of Ayckbourn is a tv production of Season's Greetings from the Eighties, which I absolutely loved at the time.  I was only nine when I saw it but it stuck firmly in my head, as you'd expect from anything which starred Geoffrey Palmer, Anna Massey and Peter Vaughan.  (In fact I've just discovered that some kind soul has put the whole thing on YouTube; I'm simultaneously dying to watch it and scared my memories will be ruined). 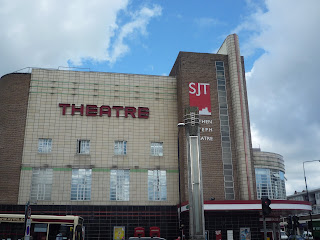 Now it felt like a proper town, but still not a particularly seaside-y one.  The shops in the main street were the standard chain stores, Marks and Spencer's, Boots, WH Smith, and not one of them was selling a Kiss Me Quick hat or an inflatable crocodile.  The shoppers were well-heeled pensioners, not fun-seekers.  I was starting to wonder if the town had perhaps given up being on the coast as a pain in the backside when I turned a corner and gasped. 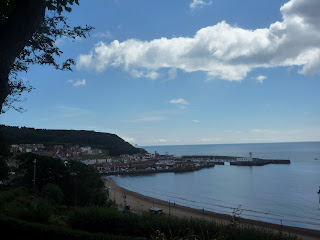 How can you not love that view?  It's everything wonderful about the British seaside in one single shot.

Just as exciting, beyond the little gardens I was stood in, was a white wooden building with Tramway to Beach stencilled above the door.  It was a funicular railway which could negotiate the steep cliffs for me.  I immediately thought of Glenda, my editor over at the Coronation Street Blog, who confessed to a passionate love for funicular railways after I rode the one in Aberystwyth.  Glenda is also a regular visitor to Scarborough; I'm sure the two facts are related. 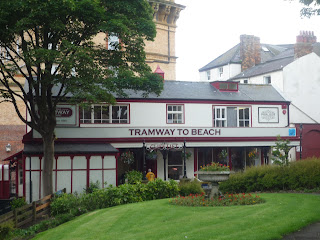 She and an anonymous commentator helped me uncover this song, which bounced round my head as I walked over to the station:

It was 75p for a trip down, and I was just in time for the next train.  While the one in Aberystwyth had been stepped, adapting to the 45 degree drop, this one was a far more traditional tramcar, with wooden seats and straps to hang onto.  Ahead of me was a lady in a wheelchair; I wondered if they made her pay the 75p. 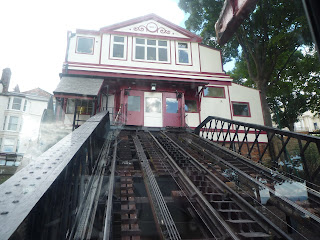 With a clunk of gears we were slipping down the cliffside in a gentle drop.  Funicular railways aren't so much a means of transportation, more a classy way to fall.  There was a sigh of hydraulics and we were at the lower station, right on the seafront.  Money well spent. 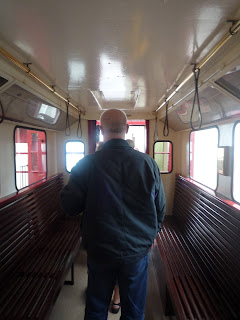 It was hard not to love Scarborough.  Down on the front there were arcades, entertainments, candy floss, the Futurist cinema and theatre advertising a tour of Joseph and his Amazing Technicolor Dreamcoat.  I went into one arcade and chucked 10p's worth of tuppences into a machine, trying to get a three inch tall teddy bear.  Nowhere else on earth would I have even considered that to be a prize worthy of effort, but here, I was bitter that I didn't get so much as a key ring.  I got about 8p ahead before I chucked it all back into the machine. 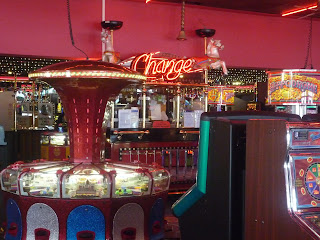 I went back onto the front.  It wasn't even ten, and the prom was just waking up, but I'd been up since 4:30 - it felt like lunchtime for me.  I strolled past the candy floss and rock shops, taking in the sea air.  Two buff lifeguards jogged along the beach, trying to bring a touch of Bondi to northern England.  It really was a lovely spot.  The buildings seemed to cascade down the cliffs, different tiers taking the building from the town to the coast.  Of course, some buildings have cascaded rather more rapidly over the years - most famously Holbeck Hall, which took several days to fall off the cliff a few years ago.  The coast round here is eroding at a furious rate.  I'll miss it when it's gone. 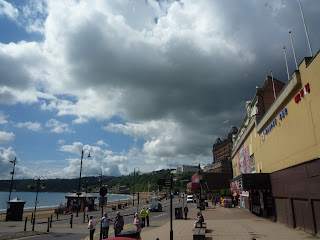 I was hungry, and a bit worried about the distance to the station, so I reluctantly left the coast and headed back up into town.  I walked it this time, staggering up a vertiginous cobbled street.  I was the only one headed that way - everyone else was coming down.  I didn't plan that right.

There was a little cafe at the top of the hill, with its French doors wide open, and I nipped in for a cup of tea and a sausage bap.  There was a woman sat by the counter, reading the Daily Mail; when I ordered my food she sighed and dragged herself into the kitchen, her break interrupted by a damn customer.

I sat down by the window and the waitress brought over my tea; she almost immediately spilt the milk, hurling the whole jug over the seat next to me and splashing my trousers.  She dashed off to fetch a cloth, leaving me uselessly prone, the milk cascading off the table, unable to stop it.  It's always embarrassing to have people clean up around you, and I busied myself with my notebook while she mopped up beside me, trying not to catch her eye.

The bap came, floury and white, with three thick bangers inside.  I spread some brown sauce over them and wolfed it down, tasting the lashings of margarine and feeling the sausage meat burst from the skin between my teeth.  The cook had returned to her newspaper behind me, job done. 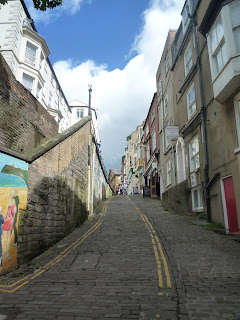 Scarborough railway station is topped by an elaborate clock tower, which looks like it's been crafted out of plasticine.  Up close, you can see the different elements - the balcony, the supports, the different artistic flourishes - but from a distance it looks lumpy.  Sadly the closer look also shows you the clock has stopped and netting has been inelegantly draped over it to discourage the pigeons.  Considering it's such a landmark in the town, it deserves better. 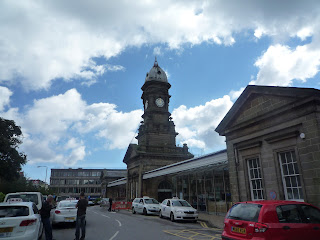 At ground level, things are rather more pleasant.  A couple of glass pavilions house the Pumpkin cafe and a ticket/tourist information office; the rail employees were more occupied than the girl with "It's Yorkshire" on her sweatshirt.  Beyond was an impressive train shed with plenty of room to move about. 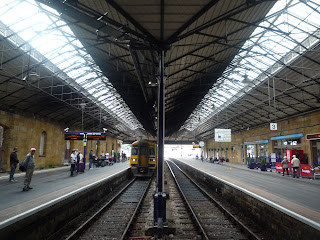 I could see platforms three, four and five, under the overarching roof, but there didn't seem to be any sign of a platform one and two.  Then I spotted them outside the station: two long excursion platforms.  They'd obviously been built to accommodate the thousands of visitors who came this way, once upon a time, with exits on both side of the train and their own station exit separate from the main one. 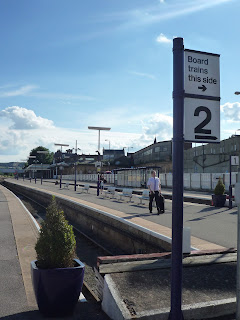 I doubt they get anywhere near as much traffic these days; probably just the odd train coming in to stable overnight.  Platform one does feature the longest railway bench in the world, though, if you're into record breaking furniture. 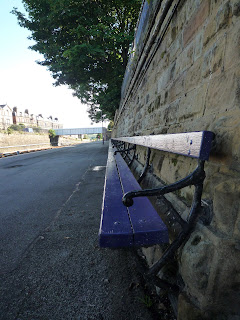 I was far more interested in a large tiled map of the railways round here, on platform 3.  I spent a good few minutes just staring at it, running my fingers over the routes and thrilling quietly at all those stations to come. 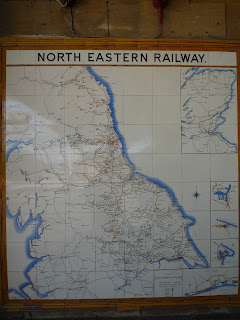 For today, I only had a few more stations to collect, so I headed to platform 5 for my Northern Rail train.  I liked Scarborough, and I was sorry to be leaving so soon.  I'll have to go back sometime and enjoy it properly.  After all, it's only one train journey away. 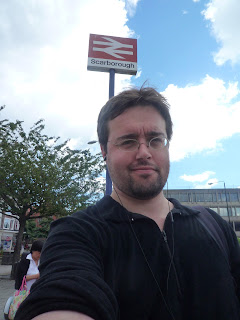 Fabulous! We were married in the Stephen Joseph Theatre last year ;-) That's how much I love Scarborough!

After all, it's only one train journey away.

If the plans outlined by the DfT today come to fruition in their current form, this will change by the end of the decade.

Scarborough will be left off the electric network, so the Blackpool-York service (currently operated by Northern with diesel trains) will be extended to Scarborough.

Never been to Scarborough: it looks like quite a nice place. A 3+ hour train journey is a bit much for a day trip though.

Bit of a gay cliche, but I was very taken with the interior of that funicular carriage. White walls, polished wood benches and straps. Might consider redecorating the spare room like that.

Unfortunately this does mean that we will have to wait for Saltburn-by-the-Sea for some more funicular action.