For reasons too boring to go into here, I found myself in Manchester with an hour or two to kill.  I thought about riding the Metrolink's newest line out to Oldham Mumps, but I didn't think I had enough time to give it my attention.  I wouldn't be able to pause at some of the stops on the way.  So instead I went out to the Airport.

The Manchester Airport spur was always going to be a bit difficult to get.  Perhaps difficult is over-stating it; it's just I like to walk between stations, and who ever walks into an airport?  It's not built for pedestrians.  A trip straight into the Airport station would slice it off my list, and also mean that the Styal Line became just one straight run. 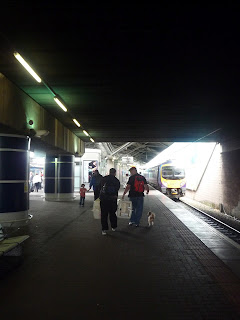 The station was opened in 1993, and it's as Nineties as a Spice Girls single.  It's got that shiny, glass and columns look to it - bright colours and concrete.  It's not dated, but it feels very of its time. 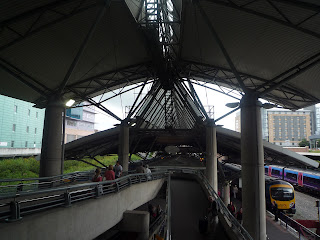 It's a good piece of epic design though.  They didn't skimp.  That roof sweeps above you.  It's "landmark" architecture that deserves the name.  You head up ramps and escalators to a concourse area with a Smiths and a Coffee Shop and a glass roof.  There was also a weird plastic tree, which invited me to find out how Manchester Airport is improving its carbon footprint through videos and computer presentations; I declined. 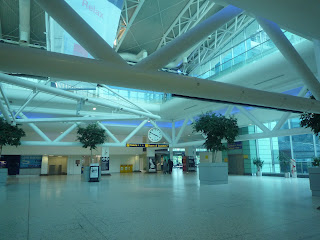 It's all very calm and soothing.  Not at all frenetic.  The most action packed place was outside, where builders were constructing a new platform.  The Metrolink's coming to the Airport; a new line is under construction, passing through Wythenshaw en route and ending up next to the train station.  Access will be from this central area, meaning you can get tram, train and bus from one place: proper integrated transport.

I'm not sure how many people will use it to get here from the City Centre, though.  The train's £3.80 return, and takes about a quarter of an hour; the tram will be comparable in price but it's got twenty stops to call at before it hits the city centre, and even then it won't go to the main railway station.  It's a bit like building the Piccadilly Line when you already have the Heathrow Express. 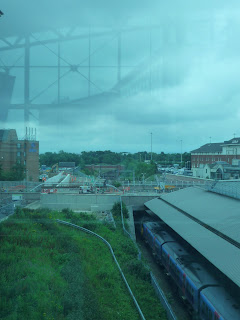 I thought I'd have a coffee and a little sit down before I headed back out again.  The Station's at the centre of the Airport, connected to the terminals via some space-age passages.  It's pleasingly futuristic; it reminded me of Drax's space station in Moonraker, though without the dozens of perfect people in yellow jumpsuits.  Instead there were just a lot of harassed individuals dragging wheelie-cases. 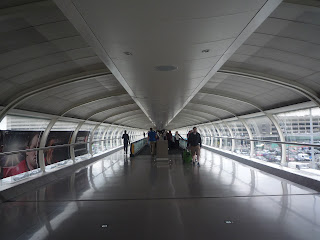 I found a Caffe Nero in Terminal 3 (they're stingy on places to sit down when you're not airside) and took up position to watch people pass.  There was a certain laziness, a bit of a stroll to their movements.  You'd think that the prospect of international travel would energise them, but it didn't; it seemed to be a trial.

I watched families, couples, individuals make their way to the check in desks and then back to security. They were tense, because air travel is full of little tests to ramp up your anxiety levels - questions about packing your bag, the check of the passports, taking your belt off at security and hoping your trousers don't fall down.  They looked a bit miserable in fact. 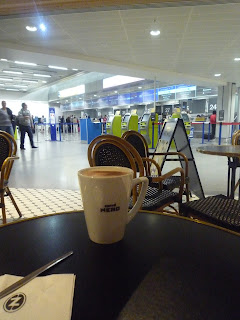 It's often said that airports are the new railway stations, having taken over their role as the transport hub for the well-heeled traveller.  I don't agree.  Airports never have the same energy as a train station.

Part of it is down to location.  Like I said, you don't walk into airports; you have to make a special effort to get there.  They're out on the edge of town, surrounded by acres of concrete, accessible by motorways and railways.  They form their own ecosystem, and are less a development of the city, more a city in itself, a symbiont attached to its body.  Plus, they all look the same.  The fast-changing nature of air travel - meaning that they are constantly updated to accommodate new planes, new procedures, new airlines - makes them into modular constructions.  Bland walls and easily moved furnishings.  Railway stations have copied some of the airport's ideas - the new King's Cross has separate areas for arrivals and departures, St Pancras has all the same international travel issues - but they've done it with rather more style.

A railway terminus can be a city's heart.  It's surrounded by life and activity in a way an airport isn't.  It's a permeable building, letting people walk through and up and over to other places.  It's not as special - most people only go to an airport a couple of times a year - but that familiarity means it becomes an affectionate icon.  Commuters develop an attachment to their termini, even if they're a bit rickety round the edges.

You don't feel you've properly arrived in an airport.  If you step outdoors - which you rarely do, because you're shuffled onto buses and taxis and trains as soon as possible to get you away - you don't get a view of a new world, even if you've travelled thousands of miles to get there.  You see concrete overpasses and car parks and Hertz Rent-a-Car.  You could be anywhere.  You've only arrived when you get off that train from the airport, at Zoo, or Chatelet-Les-Halles, or Paddington.  That's when you're on holiday.  Airports are places for you to travel from; railway stations are places for you to travel to. 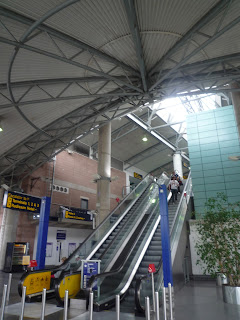 In fact, it was all a bit sad.  It didn't help that all these people were flying off to Spain and Morocco and India and I was heading back to Piccadilly.  I went back to the station and hunted around for a decent station sign; there wasn't one outside the actual building because who'd see it?  People arrived via those air-conditioned walkways, they didn't stroll in off the street.  So this is the best I could manage. 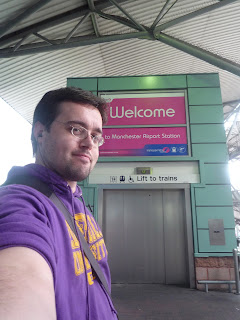 I believe Metrolink has a ban on "heavy luggage", which could make things interesting when the trams reach the airport. Ryanair-style gauges at every tram stop?

I assume they'll change the rules? Otherwise there will be a lot of arguments between conductors and confused Japanese tourists. I wonder if they'll also take some seats out to make room for more luggage, as they have done on Piccadilly Line trains.