My mum is coming to visit next month; she makes an annual trip north for a couple of days.  Consequently the Bf is leaving the country.  He and my mum are like magnetic forces - it's impossible to bring them together.

His usual trick is to head abroad with his friend Peter.  Berlin, Prague or, in the case this year, Cologne.    This takes a ridiculous amount of co-ordination and evaluation and organisation.  The D-Day landings had less thought put into them.  Every single aspect of the trip will be pored over and considered; every travel website on the net will be consulted and compared.

It's all too much for me.  So when the Bf went over to Peter's home town of Huddersfield to sort it out, I decided to find something better to do with my time.  I cadged a lift over on the M62 but jumped out in Huddersfield town centre so I could go collect some train stations. 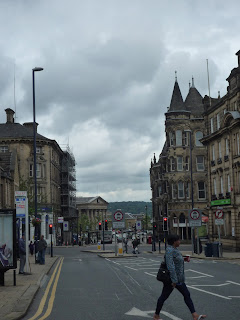 Though I'd been to Huddersfield loads of times, I'd never really looked around.  It's one of those things that happens when you know someone in a town; instead of getting to wander and discover, you get targeted hits.  You see what they want you to see.

My first impression was how brown the town was.  Liverpool is Portland stone white, while Manchester's red brick.  Huddersfield was brown.  The buildings were all made of the same stone, even the new ones, giving it a uniformity.  It was hard to warm to.  The stone was unsympathetic, and years of heavy industry had tarred and stained it.

The colour came from the residents.  It was graduation day at the local Uni, so the streets were filled with happy, laughing students.  Gowns and mortar boards were everywhere, along with glowingly proud parents.  I ducked into an outdoor mall - what used to be called a shopping precinct - and pushed against the flow of joyful faces.  Not even the PA system playing Bryan Adams could ruin their mood. 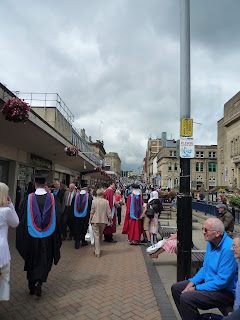 Outside the library, there were men playing chess with giant pieces, totally serious faced.  I was delighted.  I've never actually seen this happen in real life.  Especially interesting was the players; not tank top wearing nerds, but rough working class men with dirt under their fingernails. 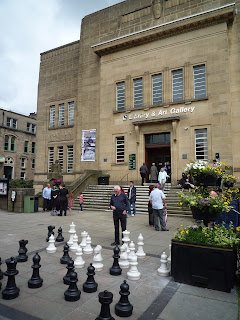 I went inside the gallery so that I could better experience the culture of the town.  Oh, all right: I needed a pee.  I only looked round the galleries out of guilt for using their loo.  There was an exhibition involving a giant inflatable, and then some plastic sheeting on the floor with a video of some people talking monotonously.

I don't want you to think I am an ignoramus.  I did my best.  I read the captions and studied it and did the art gallery furrowing of the eyebrows.  But frankly, it looked like a load of pretentious shite to me.  I actually like modern art, but this seemed to tip into that box marked "more pretension than substance".  The rest of the galleries were standard municipal authority artworks: some nice watercolours, a Henry Moore, something by a local.  I whizzed round them in double quick time, meaning that I got back to the girl on the front desk after about five minutes, which was embarrassing.

The building, though, was lovely; nicely maintained and designed.  It reminded me of a small, brown version of Anton Furst's design for Gotham City Hall in the Tim Burton Batman; there was something monolithic about it, and those faceless forms outside just added to it. 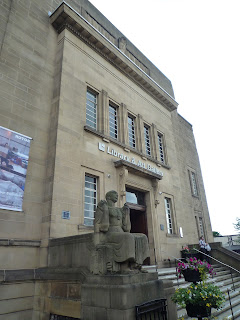 I avoided the various shopping centres - about four on one street - and instead ducked down a side alley.  It's a shame that our general fears about getting raped and murdered mean there aren't many little back alleys left.  I always find them far more interesting than the main routes, in the same way that back streets tell you more about a town.  It twisted left and right before depositing me by the war memorial. 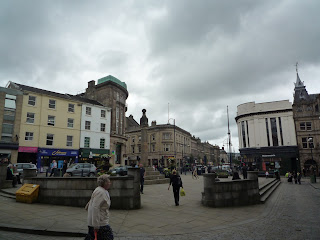 I'm going to start with an obvious truth: Huddersfield railway station is awesome. 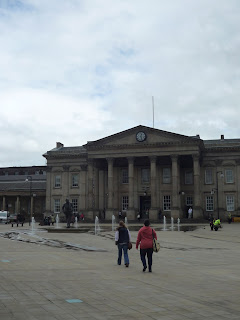 I've been having a discussion with diamondgeezer via e-mail about whether it's better to have a rapidly expanding efficient network, or an architecturally interesting one.  He loves the DLR because it goes all sorts of places and it has ambitious expansion plans it can achieve because it's so simple and cheap.  I love the DLR too, but I wish it had decent stations, ones that didn't stink of will this do?  "Why can't we be like the Victorians?" I exclaimed, slightly hysterically.

Huddersfield station is a case in point.  It's completely over designed for what is, let's be honest, a relatively unimportant Yorkshire town.  For some reason, the Victorians decided to build a ridiculously huge portico, a couple of epic wings and an enormous doorway.  It shows the power the railways had back then, and their importance.  It's ace. 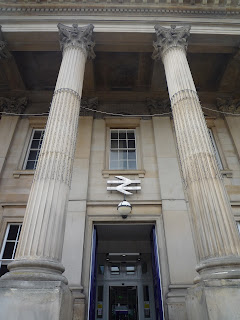 I do have a couple of complaints because I am, at heart, a very negative person.

The first is: there's no station sign.  That big, nicely laid out plaza is all very well, but there's nothing to actually tell you this is the railway station beyond that silver BR logo.  You have to take it on trust that people will know what the symbol means.  It also meant I had nowhere to pose in front of, dammit.  Harold Wilson just wasn't enough. 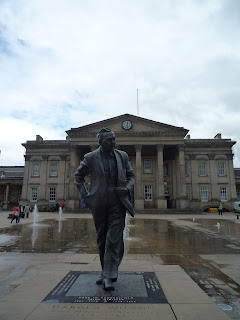 My other complaint is that it's been restored.  Yes, I know: I'm always whinging when stations are ignored, and then one gets a load of cash chucked at it and I still whinge.  The thing is, they've gone all twenty-first century on the inside.  It's minimalist white walls and subtle inlaid lighting and LED screens.  The outside is pure Victoriana but the inside is like the bridge of the Enterprise. 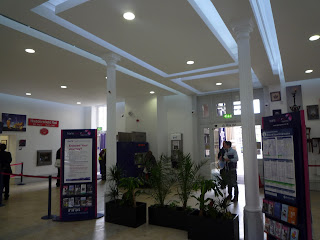 They've preserved some of the nineteenth century-ness of it all, but not enough: it's like Liverpool South Parkway in there.

I got my ticket and walked onto the platform.  Huddersfield is an east-west station, with long through platforms, which gave me an impressive view of the Pennines out of the end of the train shed. 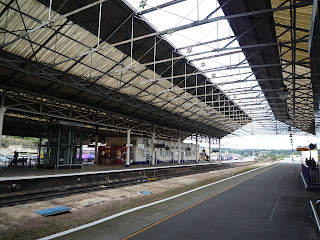 I crossed over to the middle platform, where a couple of trainspotters were perched on the end.  They took a photo of a passing freight train, then packed up and left.  I got the feeling they'd been waiting all day for this one train.  Bless. 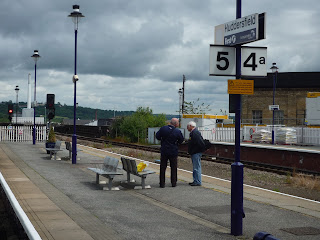 The rest of the station's simple enough.  I was pleased by a sign for the "buffet" - yeah, none of your fancy cafes or shops here; it's a station buffet, mate.  I hoped you could only buy disappointing stations and a cup of tea from a hatchet faced woman ("Cappuccino?  Where do you think you are, London?").  And there was some lovely old fashioned signage over the entrance to the pub. 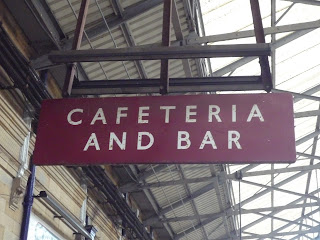 I was headed for platform 2, a little stub close to the tunnel mouth.  I was ridiculously early, which gave me a chance to have a look round.  The local rail user's group have decorated this platform with some simple little art pieces and a community notice board.  It was a pleasing sight. 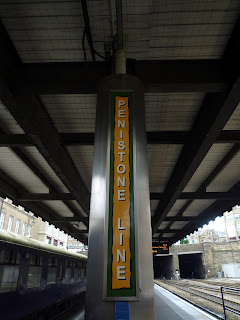 Nope.  There is nothing funny at all about that name.  Nothing at all. 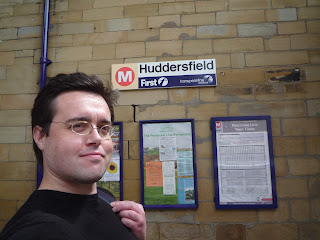 The grandness of the station reflects what a prosperous town Huddersfield was when the railway arrived, the money made on the back of the wool mills and the sweat of their dirt-poor workers.

A number of the now-depressed and bleak towns of Yorkshire (Bradford is another) were solid and rich in their time; when the trade collapsed with the arrival of cheap slave cotton, the rich people fled to Ilkley and Harrogate and the like, previously poor towns with small boring stations suddenly full of rich people. Huddersfield was left with a rich person's station but a town full of under-employed poor people.

There's a small sign of Huddersfield's attempt to keep the wool trade going - shoddy and mungo mills near the town centre. Horrible jobs for the workers, pulling the old fabric apart by hand, fabric that was often infested with lice and cholera. Worse than the wool mills.

The new Manchester Metrolink stops are dull, dull, dull - with the possible exception of Central Park. Even the existing ex-BR stops are being homogenised to the point of uniformity.