And Home, To Bed

I'm slumped.  I can't help it.  I've wedged my backpack into the window seat and I'm pressed up against it, trying to stay awake.  I don't like to sleep on trains - I'm always terrified someone's going to sneak up and steal my things while my eyes are shut - but the train is so quiet, the rolling of the wheels so soothing, and it's been such a long day.

The doors to the carriage slip open and a wide beaming face bursts through.  "Snacks?  Drinks?"  He's astonishingly tall, slightly cowed at the neck to stop his skull from scraping the roof, pushing his trolley with hunched shoulders as though utterly servile.  He's smiling the whole time, just gleeful.  He's probably the happiest person I've ever seen on a British train.  No-one seems to be buying though.  He tracks down the carriage, then reverses back again and parks in the disabled vestibule for a little rest.

A woman pops through from the next carriage - "I thought I missed you" - and buys a Coke and some crisps.  She comments on his accent, and asks where he's from.  The Gambia he says, and they chat for a little bit.  He looks happy and cheery the whole time.  I decide that all service positions should be staffed by immigrants, instead of the usual surly miseries who patrol the aisles.

Caersws passes then, a short time later, we're in Newtown.  It's another closed station building they've handed over to the local kids to decorate.  I stare out the window at a mutton-chopped approximation of a human being; I suppose it's meant to be a local historic figure, but it looks more like Prince.

As the train starts up again, the toddler across from me squeals in delight.  His mum - an enormous woman with what looks like her mother and sister - has allowed him to play on the empty seat in front.  He's clambered all over it, stood on it, bent over it, lay down on it.  He's pressed himself up against the glass to stare at the scenery, but this got boring, so he looked at the floor instead.  He poked his head between the two seats in front, and the man sitting there turns and says hello.  The boy gives him a long mournful stare, straight in the eyes, like he's analysing his soul, then turns back and screws himself into a ball on the seat.

Welshpool's just a platform and a car park.  Across the way is The Old Station shopping centre, although they'd probably blanch at such a simplistic description; it's more of a retail experience, a haven, a home of arts and crafts.  Or, alternatively, a tacky gift centre with an Edinburgh Woollen Shop.  The station building has been restored to within an inch of its life, then filled with tchotchke upon gewgaw; if they could have done done the glass in Crystal Effect Diamonique (TM) they would have done.

The principality's slipping away from me.  You can't travel north to south by rail in Wales without crossing the border; I hope they never gain independence, because that'll be a nightmare at customs.  I have to travel east, unable to simply head for home the quickest way.   The hills are getting less impressive, less special, more... English.  Fields are just fields here.  It's just more countryside.

I loved the Cambrian Line.  I'd never been on a line that was so beautiful in such a practical, unshowy  way.  Ordinary trains run through extraordinary landscapes, across epic bridges, into heartstopping towns.  Barmouth, Criccieth, Aberystwyth, Penrhyndeudraeth - I wanted to go back and visit them again.  Fill in the spaces I hadn't done right.  Go to Morfa Dyffryn when there was sun.  Visit Borth's railway museum without screaming infants.  Cross the sands to Ynys Gifftan.  Ride the Talylln Railway.

I don't know when we crossed into England, but soon we were at Shrewsbury.  I alighted to wait for the Chester train.  It's a funny one, Shrewsbury.  From the outside it's a Hogwarts of towers and stained glass.  It's an epic.  Inside it's miserable and badly laid out - I had to pass through the ticket barriers and out of the station to reach my platform.  Windows are cracked and dirty.  It doesn't look like it's been cleaned since Nationalisation.  Maybe not even then. 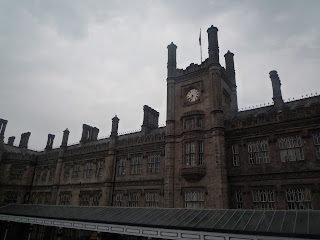 Scrub that.  I'd do it again in a second. 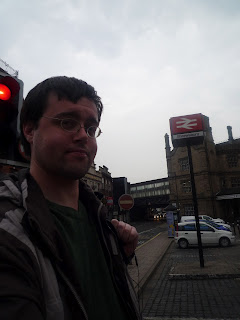 The full Cambrian Lines Journey, linked for your pleasure:


The Official Cambrian Lines Website, so you can plan a visit for yourself
Posted by Scott Willison at 19:28

Heart of Wales line, next?

"No purpose"? Pah! You know that it's the journey itself that is part, if not the whole, point of this kind of wonderful endeavour.

At least I hope you know...

"It is better to travel hopefully...