Today is a double celebration.  This blog was born five years ago, a single post shuffled out into the world.  At that time I was embarrassed, almost ashamed to be blogging, and worse, blogging about train stations.  My life's taken a whole lot of weird, unusual turns over the course of those five years, but I can't deny that it's been fun.

This is also the three hundredth post on the blog; that's an average of five posts a month, which surprises me.  I thought I'd posted a lot less than that, but hey, Blogger doesn't lie.

So it seems appropriate to make today the day I put the next phase of the blog out there.  With the Merseyrail map behind me I need to find something else to do with my time.  I can't just sit around at home all day.  I need to get out there.

The next phase is a logical upgrade, as far as I can tell.  It's the brother of Merseyrail.  It covers a lot of the same area.  And I've already done a fair amount of it.  Ladies and gentlemen, I give you... the Northern Rail Map. 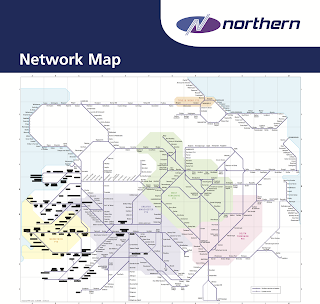 The first thing to note is - that's a lot of stations.  I'm not kidding.  That's bloody hundreds of stations (there's a zoomable version of the map here).  What appealed to me about the map was that most of them are in cities - Manchester, Leeds, Bradford, Sheffield and Newcastle, plus smaller towns.  I'm a city boy at heart, and while I enjoy walking through bracing countryside, I find walks through streets more interesting.

They've got some great names though - Giggleswick?  Mytholmroyd?  Pontefract Tanshelf?  Those are just amazing.  It's like a competition to be the most Northern place on earth.  And they vary in size tremendously - city centres to village halts.

The grey blobs are stations that I've already done, incidentally; as you can see, an awful lot of the west has been covered.  I've got a head start.

Another advantage is that Northern have a great variety of Ranger and Rover tickets.  It means I'll be able to get around relatively simply for a low cost.

This isn't going to be easy, and it's not going to be quick.  It took nearly five years just to do Merseyside, and this plan will take me to the other side of the country, for goodness' sake.  By the time I finish Northern probably won't even be running the franchise.  It could be fun though.

And I'll still report on interesting stuff in Liverpool - I am the Merseytart, after all!  There's tons of stuff going on round here - the Central revamp, the new trains, Walrus cards, even the possibility of wi-fi in the stations.  It's all happening.

I hope you'll continue to read as I move out across the North.  And if you've got any tips on places to go while I'm out there, let me know.  I'm all ears!
Posted by Scott Willison at 11:35

Email ThisBlogThis!Share to TwitterShare to FacebookShare to Pinterest
Labels: forward and back, Merseyrail, Northern Rail

I seem to remember suggesting this a while back and you baulked at the enormity of it. Glad you've had a change of mind!

Hell of a job though - quite a few these stations have a very limited service. If you want to do a joint Station Master/Mersey Tart trip, let me know ;-)

Amazing! Best of luck! I look forward to you doing the Harrogate Line in about 4 years time, that's the line I'm moving back home from next week. It goes through some very nice places so it should be a good one.

Also I'm very, very much looking forward to seeing how exactly you intend on doing Manchester United! Can you alight there without a ticket for the game?! Perhaps by that point the blog will be so well known that Northern will be willing to charter a special service on your request...

Thrilled to read this, Scott. As I was scrolling down I thought you were leading up to committing yourself to all the Greater Manchester stations. But then I scrolled a bit further!

It's a fantastically epic and inspired decision, and I wish you all the best with it.

And happy fifth anniversary as well!

P.S. I thought you blogged about *railway* stations?

Yep, great idea Scott, should keep you going for a while. Middlesbrough. ........Best get it done first, then it's out of the way!!, oh and Redcar too!! Seriously, great idea, look forward to reading You :-)

And hey, there are only about 400 stations to visit on that map. That's a London Underground Map-and-a-half!

If you can visit two a week, you'll have the whole adventure wrapped up in time for your tenth anniversary. Easy...

This is a great step up, ive been a follower for a long time, checking the blog weekly, and i must say i really enjoy reading your posts