Putting The Bar in Barmouth 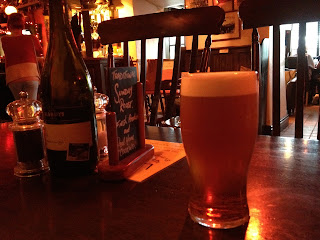 The beer was going to my head.  It was just one pint of bitter, but I'd not eaten since breakfast, and now it was five o'clock.  I could feel the booze swilling around behind my eyes.

Across from me, on the other side of the pub, was a group of holidaymakers who'd obviously hidden from the rain in here all day.  They were loudly, boisterously, demonstrably pissed, laughing, caterwauling, hysterical, but all good natured.  "I need a wee!" shouted one of the girls, clambering over her mate so she could get to the loo.

They were all from the Midlands, brought here by the train line.  Wales is crossed from east to west by three separate lines - one across the north coast, to Holyhead; the London train, via Cardiff and Swansea; and the route from Birmingham to Pwllheli.  It means that the coastal resorts have been divided up by the English regions - Scousers and Mancs to the north, Cockneys to the south, and Brummies here, in Barmouth.  You're as likely to hear a Midland accent as a Welsh one along this section of coast. 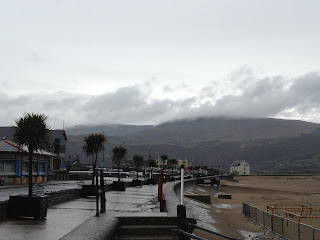 I'd been in Barmouth for an hour.  It had suffered a battering from the rain, leaving the streets black with moisture.  I'd had a soft drink in my hotel until the worst of it had subsided, then I pulled up the hood of my coat and ventured down to the front.  The town sits on the north bank of the Mawddach estuary, and looks out over miles of open sand.  It was originally a shipbuilding town, but as that industry subsided, tourism came to rescue it; thank goodness for all that beach.  Even under the miserable skies, the acres of yellow-brown sand are incredibly tempting; if I'd have had a bucket and spade I'd have been out there building a fort.  The joys of a day at the seaside never let you go. 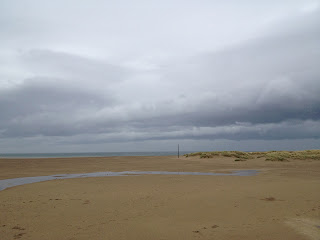 It was that weird in-between time for the season, after Easter but before May Day, when no-one's quite sure whether it's Spring or not.  The attractions on the front had come down on the "not" side.  The waltzer was unlit, the amusement arcade shuttered, the hot dog and burger shack closed for the day.  If indeed they'd ever opened at all. 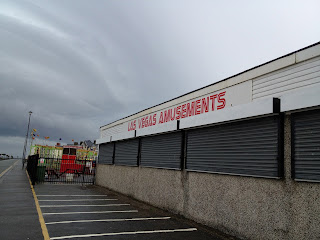 The high street is parallel to the front, squeezed between the sea and the mountains.  On the corner was the Arousal Cafe; it was the Carousel Cafe until someone stole the "C" - they've given up replacing it.  It's a pleasing piece of seaside innuendo. 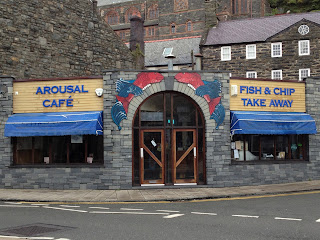 Beyond it are chippies and kebab shops and curry houses, interspersed with the kind of weird gift shops you don't get anywhere else.  The kind of places that sell draught excluders for £12.99 and white wooden birdhouses that no bird will ever live in, stuff that's only bought by day trippers searching for a souvenir or an escape from the rain.  One shop had a life sized Predator skull made out of metal taking up pride of place in the window; I wondered how that went down with the little old ladies ("that's an unusual hat").  There was a bit of a bohemian edge to it all though - orange banners flew from the Arts & Crafts centre, and a tiny theatre was boasting its jazz evenings and experimental productions.  There was the sad hulk of an old department store; no, sorry, a drapers, a lovely building but too big to work in this tiny tourist  town. 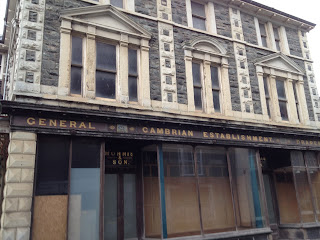 Now the rain had finally given up people were starting to appear in the streets.  I heard one group before I saw them, cackling, screaming with laughter.  I rounded the corner to encounter a gang of six middle aged people, four women and two men, the women wearing garish fur hats on their head, like they'd killed some Muppets and taken their pelts as a trophy.  There was a couple hanging back from the other four, arm in arm; as I passed, I heard her mutter to her husband, "We don't want to go to a restaurant with this lot, do we?"

"Because they're too fucking noisy."

The street flattened out at the bottom to form a square.  In the centre was a white painted piece of artwork which probably represented the might of the local fishing industry, but to my eyes just looked a bit... well... vaginal.  I can't tell you why - God knows I'm no expert - but there was just something fanny-ish about it. 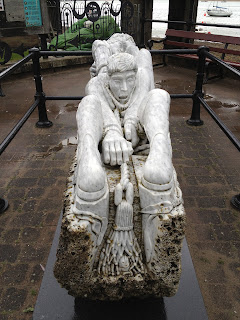 I backed away slowly in case it looked like I was paying it too much attention and passed under the bridge which carries the railway into the town.  It's on the same level as the beach for most of its passage through Barmouth, but then it rises up on a viaduct over the harbour before disappearing into the kind of brick tunnel mouth you thought only existed in Hornby layouts. 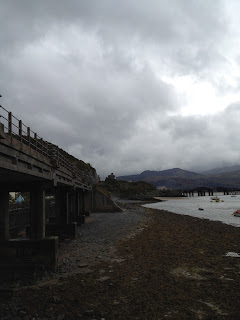 A brief snatch of tunnel and then it's across the much longer, much more magnificent Barmouth Bridge.  I looked at it with a combination of admiration - it's a wonderful sight, curving across the bay - and excitement.  I was going to be crossing the bridge the next day, at the start of my Cambrian Line quest.  It was like a big wooden trailer for the main feature.  The bruised sky just made it even more dramatic - nature's version of a deep-throated voiceover. 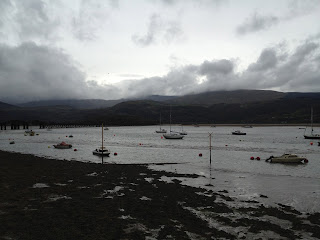 I would have loved to have called into the Sailor's Institute, which advertised billiards and a reading room on the sign outside.  It was at the end of a row of family restaurants, the kind of place you'd go to on the last night "as a treat".  Was it the river or the sea here, lapping at the wall, making the boats rock gently?  I couldn't tell.  I licked the salt off my lips. 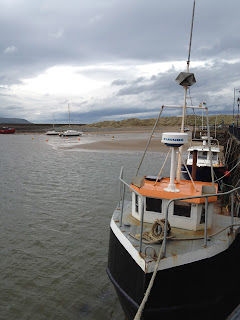 The Last Inn was calling to me by now, an old fisherman's pub on the square.  Soon I was sat in the corner with my pint.  It was a weird place to be; on my right was a fireplace, warming my chapped cheeks, and on my left was a waterfall.  A proper, cascading waterfall, actually inside the pub - it delighted the little girl who came in with her parents not long after me.  She stood in front of it, clutching her blackcurrant and soda and gazing rapturously.  A trickle of tourists came in, not long after the drunken Brummies had left, shaking themselves warm as they came in and grabbing at menus. 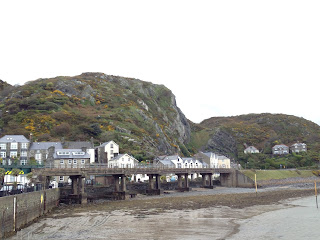 It's a lovely spot, Barmouth.  It's got that wonderful combination of a stunning spot combined with charm and personality.  I'd coasted round the town, beaming, just drinking in the atmosphere and the sights.  Being alone on the streets helped - I appreciated it all the more without heaving day trippers around me.  I stayed there for three nights, in the end, and it never failed to entrance me.

I swallowed the last of my beer and headed back to my B&B.  Tomorrow was going to be a long day.
Posted by Scott Willison at 16:32

Possibly I've been reading too much bad internet fanfic (is there any other sort?), but can't help wondering if there's more to be said about the last sentence of the 14th paragraph.

LAST INN PUB DOES NOT HAVE NATURAL CASCADE OF WATER LOOK CLOSELY AND YOU WILL SEE THE WIRES TO THE PUMP ,
"Its ALL a CON" LOOK UP AND YOU SEE FILTHY DIRT AND COBWEBS