Even the grapefruit pink wash of the sunrise couldn't make Pwhlleli look pretty.  Instead of bathing it in a glorious glow, the light seemed to catch on the ugliest features - the satellite dishes, the pebble dashing, the stained concrete.  It was barely six, and I was deeply regretting my decision to go to a hotel that was mainly a pub with rooms.  Sky Sports had echoed up through the floorboards until closing time.

My train was humming on the platform, letting out those odd diesel pops and grinds.  I treated myself to a table seat and wedged myself in, with only one thing on my mind: Aberech or not?

Yesterday I was clear - no.  I couldn't be bothered to go back and collect Aberech.  After a shower and a pint, my mind started to shift, and then the intervening hours had created a clammy hand at my neck.  The knowledge that I was just one station away from perfection.  The overwhelming desire for completion and closure.  I needed to go there.  I needed to just collect that one station, or I would always, always regret it.

Problem was, the fates seemed to be against me.  It was the first station after Pwhlleli, not far outside the town, and the train seemed to be speeding along quite happily with no intention of stopping.  There was no sign of the guard either.  That prickly feeling of anxiety began to crawl up my throat - not just because I was nervous about asking for the train to stop again, after the sneery woman the day before.  That request stop seemed to be slipping away.

"Good morning."  The guard appeared, professional, calm.  His blonde hair had been efficiently spiked and his uniform was clean and newly ironed.  I handed over my pass and he asked where I was going to.

"Aberech?" I said hopefully.  Pwhlleli was almost gone.  I didn't know if we had time.

"Aberech!" he exclaimed.  His efficient exterior self-destructed; he was suddenly as sweetly camp as Alan Carr at a Pride parade.

"Just in time.  We'll have to go to the middle though."  He sped down the aisle, the increased pace giving him a mince that John Inman would have rejected as over the top, and rang the bell by the door.  We stopped only a few moments later. Aberech looks like another country station; there are fields and trees and the twitter of birds waking.  The sheep were already excitable, making their presence felt with loud calls to one another.  Under it all though, an ambient backdrop, the gentle whisper of waves crashing.  I turned away from the platform and headed south, up and over high dunes, and reached a wide, empty beach. 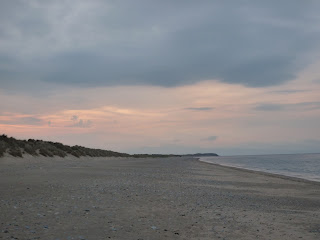 The beach was rough with stones, which made it somehow infinitely more interesting than just another wash of sand.  There was a texture to it.  I walked to its centre and watched the water rise and fall.  My sleepiness had fallen away; the combination of the view and the sea breeze shook me awake. 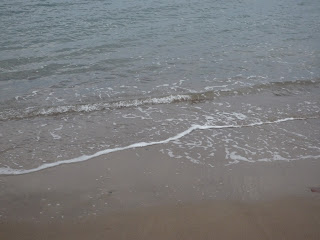 Finally I turned back.  As I reached the top of the dune I saw another train headed for Pwhlleli, roaring past, the driver taking advantage of the early hour to open it up to maximum speed.  The station was in the distance, quiet and undisturbed. 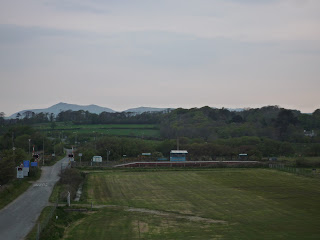 I stumbled down the hill, trying not to slip and cover myself in the slightly moist sand.  There was a child's sock half buried at its foot.  No doubt a visitor from the neighbouring Aberech Sands holiday park; its neon sign glowed, still prominent in the half-light. 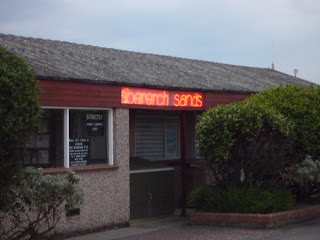 Click.  Photo taken, sign in shot, station collected.  And that was the Cambrian Coast Line completed.  Every station between Pwhlleli and Dovey Junction visited, photographed, written about.  I should have felt a sense of achievement, but I didn't.  Possibly because it had been so easy.  The whole line had been so charming and different.  This time last year, when I'd finished the North Wales Coast Line, I was a physical and emotional wreck.  Today I was aching for more.

Which was lucky actually.  Because I was heading back to Dovey Junction - probably the only person in history to have alighted at that station twice in one week.  I still had a branch to collect. 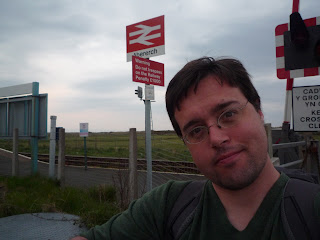 Fantastic. Looking forward to Borth. Please sneer as much as possible at this Brummie holiday hellhole.