I was predisposed to like Aberystwyth.  I used to work with a girl named Emma who'd both studied and met her husband there.  Consequently she had dozens of fond memories of the place which she was happy to share.  She made it sound like a great, jolly, pretty town. 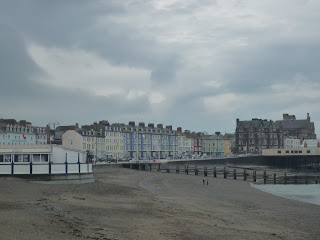 She was right.  There was a laid back, fun atmosphere to the place.  From the wide sweep of the bay, with a pier and guest houses painted the colour of ice cream, into the clogged streets behind, there was an energy and a charm to it all.  The promenade was being washed down with jets of water as I walked along it, preparing for the summer season.

I turned inland by a small square.  There was an old-fashioned pub overlooking it, and a group of students congregated on the benches.  The University does of course explain a lot of the town's vibrancy.  Aberystwyth is the end of the line, hemmed in by the sea on one side and the mountains on the other; you need to make your own entertainment.  The far Western brim.  The students had taken the town and filled it with their youthful vigour.  We were out on the edge, away from the bright lights of the rest of the country; it was a place to create your own world.

It was weird being in a proper town again.  For the last few days Barmouth had been as exciting as it got, and after that, Aberystwyth felt like a throbbing metropolis.  There were pubs and clubs and shops everywhere.  Suddenly I could see familiar names like WH Smith and Boots again. 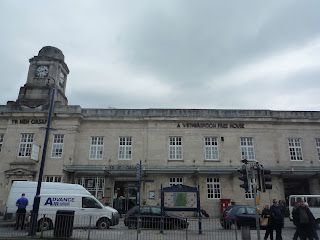 I walked through the town to the station, a white stone building that stood imposingly over the locals.  Its off-centre clock tower was designed to be seen from as far as possible, directly down Terrace Road; I imagined harassed families running down it from the beach, buckets and inflatables flying, watching the minutes to their train tick away.

All was not as it seemed.  The station was still there, but there wasn't the proud arms of a railway company up there, or the double-arrow BR logo.  The writing along the top was A Wetherspoon Free House.  The station building was a pub now - another boozer carved out of an old building by the corporate behemoth.  Meanwhile, to the side, a retail park had been constructed on the old railway sidings, replacing engines with a Lidl and a Great Outdoors.  It was disappointing, though at least they'd named the pub Y Hen Orsaf - The Old Station.  Directly opposite was a far more offensive pub name: 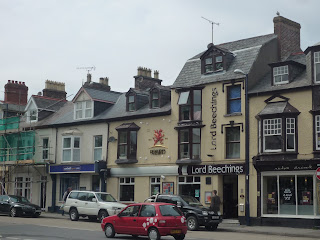 Having a pub called the Lord Beeching opposite a station is like putting a giant photo of the Pope opposite an abortion clinic.  It's just offensive.  Especially since Doctor B sliced two of the lines from Aberystwyth, cutting a five platform station down to one mainline and one heritage platform. 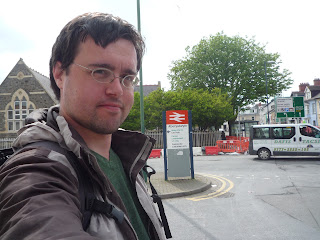 To give Wetherspoon's their due, the building has been extremely well-restored.  The narrow rooms and areas of the old station have been maintained, with the pub gubbins inserted carefully inside, and the mustering area at the head of the platforms has been converted into an open terrace area.  I got myself a pint and sat down out there to watch the station activity. 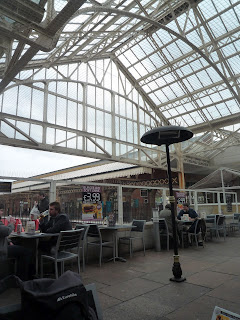 With the boozers annexing the main station building, all the facilities had to move somewhere, and so ticketing and so on are now located along the side of the platform.  It's still possible to walk through the grand archway directly from the street into the station, but you pass an Indian restaurant instead of a moustachioed porter these days.  Passengers are pushed off to one side, following the barely noticeable sign you can see above. 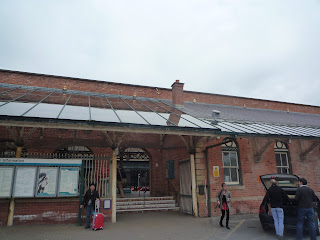 I finished my pint and sauntered onto the platform for the train.  It was filling up with students clutching rucksacks, holdalls, black bin bags; for the first time in ages, I wasn't the only one on the train who looked like they were moving house.  There was a toilet on the station, which made me smile.  Years ago, I'd read the novel Stripping Penguins Bare, in which Benson, the hero, is picked up by an enormous man in the station toilet and taken to a farmhouse for a thorough seeing to.  I'd recently revisited the whole Benson series - the story of a Catholic schoolboy growing up in New Brighton -  as I'd got the long-awaited fourth book as a gift a couple of months ago.  Sadly, the newest book was a major let down; the author had gone away and convinced himself that he was writing social commentary, instead of amusing character pieces, and so it's three times as long with a quarter of the jokes of any other book in the series. 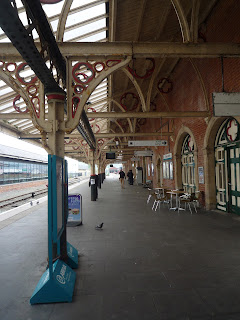 I didn't venture into the toilet; it was unseemly, and I really didn't want to find an enormous sex-crazed farmer in there.  I had a train to catch after all. 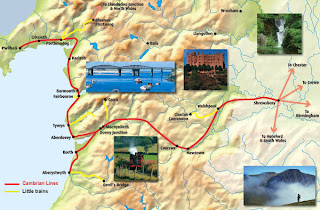 Collecting Aberystwyth meant that every station to the west of Dovey Junction was mine.  I'd conquered both branches of the Cambrian Lines - Mainline and Coast.  I was tired but deeply happy.

Eagle eyed observers will have noted that the Cambrian Lines go all the way to Shrewsbury, so really, I should have got the stations in between Dovey Junction and there as well.  To which I say - piss off.  Yes, there were more stations en route; yes, there's a part of me that wishes I could have got them too; but the geography and timetabling of the line meant that I wouldn't get home until nearly ten o'clock in the evening as it was.  If I'd stopped for stations on the way, I'd have had to stay another night, and though it was tempting, I wanted to get home to my own bed and my own telly.

Instead, I made just one more stop - appropriately to the self-styled Gateway to the Cambrian Coast Line. 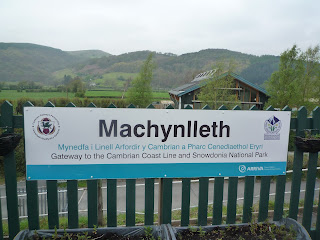 For once, the station wasn't the main attraction.  I was here to meet the closest I have to a showbiz pal - Mike Parker.  Mike's the author of the absolutely fantastic book Map Addict, the story of his obsession with the Ordnance Survey.  It's always great to read a book that makes you think, "it's not just me then".  He writes lovingly and generously about his affection for the mapping giants, covering its history and infusing it with personal stories.  I enjoyed it so much, I did something I have never done before - I sent him a fan letter (well, a fan e-mail).  We struck up a correspondence and, when he was in Liverpool with his partner before Christmas last year, we met up and had a few pints in the Ship & Mitre. Now I was in his neck of the woods, so he offered to return the favour.  He met me on the platform and immediately offered to take the obligatory sign shot.  We picked a heritage sign round the side, for a bit of variety. 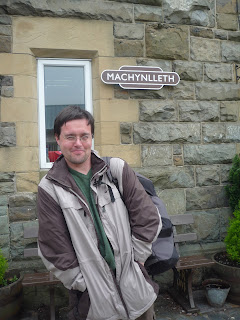 As I write this, Machynlleth is underwater; terrible floods have swept through the town, driving people out of their homes and closing businesses.  (I have checked that Mike is okay; he lives outside the town, so all he's lost is some foxgloves).  Back in May though, it seemed to be yet another pretty Welsh town.  Mike filled me in on its history and sights; he's from the Midlands originally, but has turned native, learning the language and writing extensively about the country and its people.  He's even written about Dovey Junction in his book Real Powys.  He pointed out the town clock, for example, erected in the 19th Century by an unloved English landowner and now damaged.  Unfortunately, the builder was so unloved, they've had problems raising the money to refurbish it...

Our first port of call was Y Plas Machynlleth, the local civic centre, where Mike had to prepare his AV equipment (not a euphemism).  It was the Machynlleth Comedy Festival, and he was performing a standup routine later.  Through trial and error we set up his laptop, then headed back out into town for a pint.

It became clear that Machynlleth wasn't like other Welsh towns I'd been to.  Criccieth doesn't have a comedy festival; Tonfanau can only dream of an arts centre.  Machynlleth attracts thinkers, liberals, frontiersmen and women; it's a town that embraces life at a slight angle.  On the outskirts is the Centre for Alternative Technology, promoting eco-friendly developments and innovations, as well as researching new ones.  The people who waved hello to Mike (and he was very popular in town; we couldn't turn a street corner without him bumping into someone he knew.  It was like walking down the road with Sean Connery) were all a little different - a bit rough round the edges, a bit more easy going.  It's a town that's got its feet firmly planted in an organic compost heap.

(It does also have an Aga Shop, the only one I've ever seen outside of Chester; I guffawed, only for Mike to confess his devotion to his recently purchased Aga.  I don't think they're ovens, I think they're gateways to a cult, like those tests the Scientologists perform on people to get them through the door.  I suspect if I'd gone inside I'd have emerged with a five burner cooker and a strange devotion to Xenu). 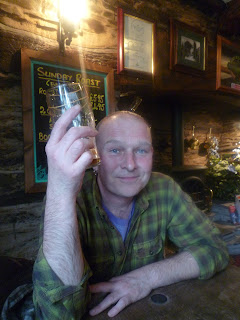 We chatted over a couple of pints, before Mike had to go and give an interview to Radio 4.  Told you he was a glamorous showbiz person.  I tottered in the opposite direction, back to the station.  Outside I took an up the nose shot, just for completion - every other station got a photo with my nose hairs in it; why should Machynlleth be left out? 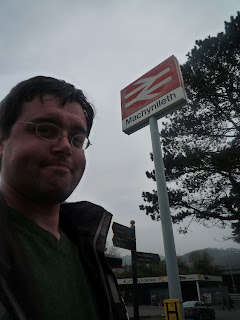 The station building, incidentally, is a lovely little thing.  Like much else in the town, you can feel the respect and care the residents have for their environment; they have put some effort into preserving their locale. 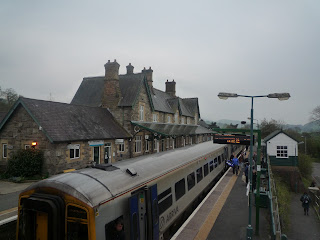 Trains for both branches of the Cambrian Line meet and part at Machynlleth.  The trains to England from both ends join up here (ignoring poor old Dovey Junction in the process), making an extra-long train to cross the border.  I clambered on board and chose a quiet seat for my journey home.

P.S.  Mike was worried I wouldn't know how to pronounce Machynlleth, so he sent me a handy pronunciation guide: 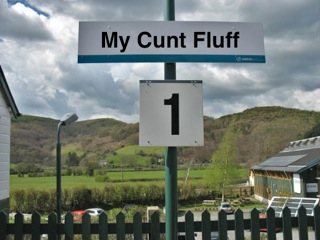 Hoylake has an Aga shop too. You're being surrounded on all sides.

There are over 70 Aga shops in the UK. Simply type in your postcode at this website.

Made me laugh Scott; and lots of nostalgia; I was student at Aberystwyth in days when the full station(well, THREE platforms) was still open AND the signal box, and Dyfi Junction had a large hut!Your journey up the Cambrian is very entertaining; and i am glad you liked Aber and Machynlleth, two wonderful towns. Steve Benson