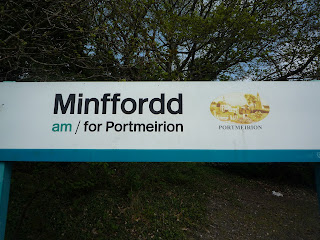 There's a rift slicing through Minffordd.  You get off at a perfectly normal, ordinary Arriva Trains Wales station.  Platform, road bridge, turquoise shelter.  It's even got a semi-ALF.  I was sharing the train with a load of schoolchildren, and they bundled out onto the platform, yammering into mobile phones and with iPods in their ears.  Traffic noisily passed by. 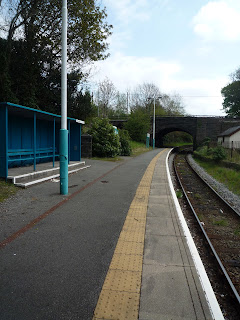 I followed the kids up the ramp to the exit, pausing for a couple of photos and letting them get ahead.  Then I passed through a dark archway and went back in time. 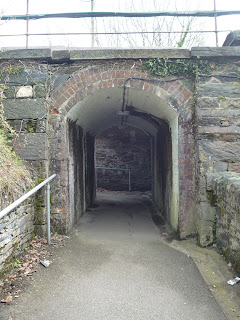 Beyond that arch it's no longer the 21st century; it's sometime in the Thirties or Forties.  It's a time when men wore hats, and women wore hats, and people were casually racist and smoked like chimneys and had tuberculosis.  It's a world of repressed emotion and cinders in eyes and almost but not quite throwing yourself under the express train. 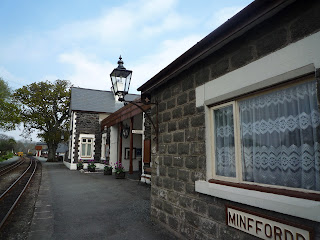 Minffordd is part of the Ffestiniog Railway, probably the biggest of Wales' "little railways", and certainly the most well-known.  The crossing lines form a sort of interchange in time, like a particularly odd episode of Goodnight Sweetheart.  It was charming, a little museum piece to remind you that train travel used to be a pleasantly homely experience. 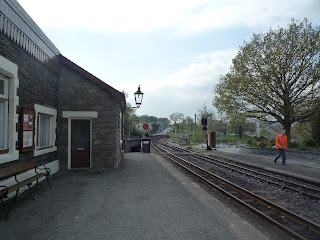 The narrow gauge train had left just before my train arrived; I suppose the timetable's been built to accommodate people heading home in the afternoon, rather than arriving for a trip.  I walked outside and got the station sign, making sure to get both the old and new versions in one shot. 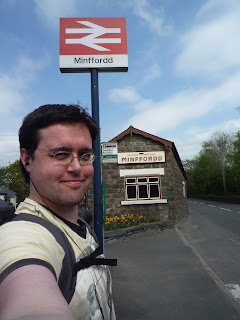 The road heads down the hill from the station, threading above and below the railway to Porthmadog.  I passed the entrance to Portmeirion on the way.  I have to admit I wasn't particularly tempted to look round.  I knew from a previously aborted visit that it was pretty expensive, plus I didn't think I'd have enough time to give it justice.  In addition, I have never seen a single episode of The Prisoner (I can hear Jamie gasping in horror at this point).  I haven't avoided it, but I just haven't got round to watching it, so I feel that I'd miss an extra dimension of the Portmeirion experience.

To my right, the mountains were being torn apart by machines, systematically quarried for the slate.  Tall terraces marked the progress of man into the side of the solid heft of the earth.  It was awesome and a little frightening.  As I walked I thought about all that rock being chipped, mined, shipped out, never to be recovered.  All those bits of the earth that we'll never get back.

Porthmadog is reached via The Cob, a long embankment built across the estuary of the Glaslyn river.  For decades this was the main route into town, but a newly opened bypass further north means that it's been relegated to a local road.  The Ffestiniog Railway also uses the Cob to get to the town, on its highest point, while pedestrians are walled off on the interior. 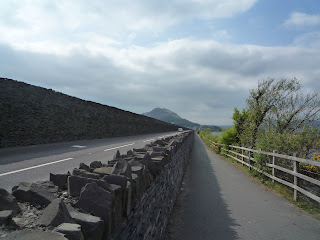 It gives you wonderful views across the estuary, to the mountains beyond.  Tired cyclists, baked in the sun, passed me on the road.  Lagoons formed in the reclaimed land, filling with sea birds.  I could see the low profile of the new bridge in the distance - clearly it was built to try and be as unobtrusive as possible.  That disappointed me.  A good piece of engineering and design can enhance a landscape.  Though admittedly, improving this landscape would be like putting lipstick on Angelina Jolie - you had a pretty good start. 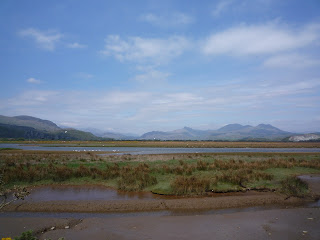 At the end of the Cob, there's a bridge to give access to the river, and the station of the Ffestiniog Railway.  There were several portly men with grey hair sunning themselves trackside, leaning against the wall and drinking tea.  I imagined they were all retired BR engineers, who'd taken all their knowledge and pushed it into the volunteer railway.  Their poor wives, imagining that after forty years they'd be able to wash their husband's shirts without presoaking it to get the oil out.  I was tempted to shout up to them and ask if they knew where the proper train station was, but I feared being beaten to death with a sleeper. 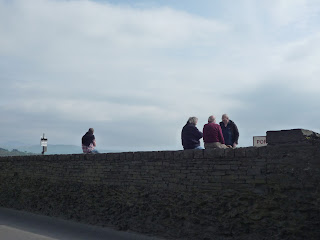 I was three metres inside the town when something suddenly hit me: "Porthmadog" and "Port Madoc" were the same place.  I don't know how this fact sailed over my head for so long.  Probably because my uncultured English lips had assumed Porthmadog was pronounced as it was spelt, with a soft "th" and a "g" on the end.  I felt thoroughly stupid. 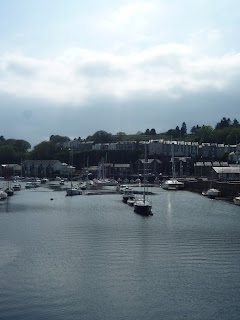 I liked Porthmadog less the more I got to know it.  At first, it seemed thoroughly enchanting, with its pretty harbour and that heritage railway.  As I walked round I realised that it wasn't so much a town as a tourist fleecing machine.  The presence of "Cymru Crafts" and, oh Christ, an Edinburgh Woollen Mill spoke volumes.  This was the kind of town where the coach parties are frisked on exit for their small change. 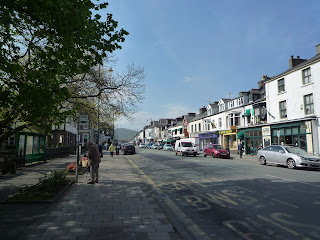 Having to make an escape from a drunk didn't help.  He lurched towards me on a side street, an alcohol soaked zombie seeking out change from a tourist.  I stowed my camera and made a quick getaway before he could spit out his request.

I'm not sure where he got drunk, though, because I couldn't find a pub.  I'd decided to treat myself to a pint, but the only places I could spot seemed to be gastro first, pubs second.  I didn't fancy a sneering waitress when I explained all I wanted was a bitter, not an overpriced plate of fish and chips, so I finally fell into the Cafe Portmeirion.  It was part coffee shop, part kitchen shop, but it had free wi-fi and good lattes so I installed myself in a corner by the cake decorations. 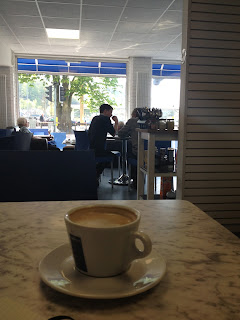 Again, I was the only English person in there.  Ahead of me a schoolboy sat with his Granddad, shouting conversational Welsh at him and getting the occasional nod in return.  I imagined his mum thrusting a tenner in his hand, telling him to take Gramps out for a cup of tea and letting him keep the change.  I had no idea what they were talking about until "Everton" was suddenly there in amongst all the weird phrases.

Outside I saw some familiar faces.  On the train that morning I'd been sat behind The Most Middle-Class Family In Existence, and there they were, taking photos in the street.  Dad had a wispy hairdo and a thin beard; he wore a t-shirt with Thai characters on it, no doubt bought in a really genuine street market somewhere untouristy you'd never have heard of.  Mum was pregnant, and wore a tight black frock with a flatteringly simple cardigan that probably cost a silly amount.  Their two adorably tousled children played around their knees.  The family had caught my attention because of their choice of entertainment on the train; Mum and Dad had pulled workbooks out of their wicker beach bag, a sort of "I Spy: Seaside Edition", with illustrations of what they might find in a rock pool.  "Look at this x-ray of a mollusc!" Mum had exclaimed, and I'd sniggered behind my hands.  When I went on a trip with my parents I was bought a Beano Summer Special to keep me quiet; it wouldn't have occurred to them to give me homework. 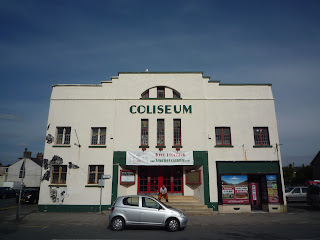 This wonderful Art Deco Coliseum cinema was on the way to the station; I was sad to see that there was a banner asking for help to save it.  Even more depressingly it was opposite a Tesco superstore roughly the size of Bristol.  When did shopping become a leisure activity, a way to pass your time?  And when did going to the supermarket become part of it?  Wandering round looking at clothes or shoes or DVDs in your spare time I can sort of understand, but where's the entertainment in staring at Cup-a-Soups? 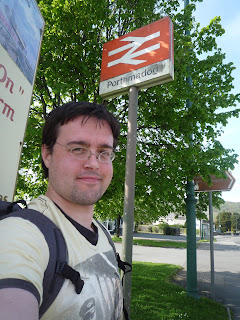 In one last frustration, it turned out that Porthmadog's station building has been preserved.  As a pub.  If I'd just walked a couple of hundred yards more, I could have had that pint, inside the proper station.  I was extremely annoyed. 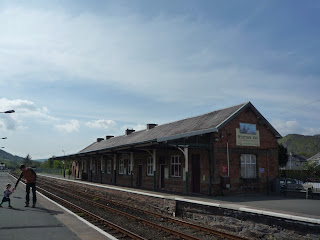 It was a passing annoyance, though, a momentary anger with myself.  Standing on that platform, it was hard not to smile.  I was on the final stretch of the day, and I just had a couple of trains and a little bit of walking and I would have finished the whole of the Cambrian Coast Line.  Or so I thought.
Posted by Scott Willison at 18:38

Nice to read your article! I am looking forward to sharing your adventures and experiences. https://whattodoinguide.com/