There was a time when men would invite me back to theirs for coffee.  Now men invite me out to transport museums.  I really am getting old.

Fortunately on this occasion I was quite happy to comply.  The man in question was Ian, diarist, composer and professional nostalgic, and he was in Manchester for the afternoon.  He sent me an e-mail asking if I wanted to meet up and visit the the city's Museum of Transport.

I had no idea there was such a place.  I wondered if he meant the Museum of Science and Industry, which I visited last summer, but a little Googling and I discovered no, there was an actual Museum of Transport. I couldn't refuse.

The museum's one stop out of town on the Metrolink, so Ian and I got to experience the thrill of sitting in the bend of the tram.  It really is the best place to sit, watching the hinge swivel underneath you while the seat rises and falls.  I could have stayed on it all day, to be frank.

The museum's housed in an old bus garage, which gives you a clue to its contents.  It's like Birkenhead's transport museum, but on a much larger scale: two separate halls of transportation goodness. 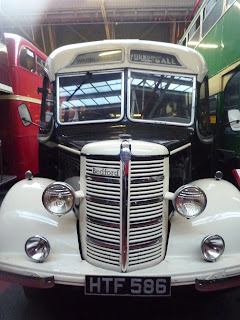 It's mostly buses.  Lots of them, from 1950s coaches that look like they should be turning up in the titles to Hi-de-Hi! to a much more modern Magic Bus.  There's a bus which went to Monaco as part of Manchester's 2000 Olympic bid.  There's a Routemaster, which the city trialled on its roads once and then gave back to London Transport, but which is included as "what might have been".  It also covered  the onset of deregulation in great detail, with an intimate history of Buzzy Bee Buses, a minibus firm which took the bee theme and rammed it into the ground until it thankfully went bust.  (A leaflet apologising for an error in the timetables contained so many bee puns I wanted to smash the case and burn it for the good of the English language).

As I've said before, a bus is just a bus to me.  And captions explaining that the difference between Bus A and Bus B is down to its synchromesh gearbox don't really help.  So this was all a bit meh.

There is a prototype tram, which is different to the ones that made it onto the streets in... some way.  The ways were too subtle for mere mortals to see but according to the signs they were there. 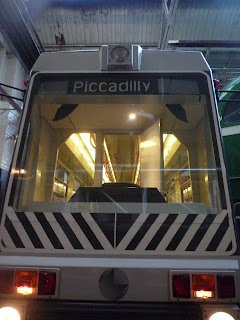 So far, the £4 entrance fee seemed overpriced (even though Ian had kindly paid).  Then, from across the hall, I saw something that made my heart go aflutter.  No, not the disturbing tranny mannequin. 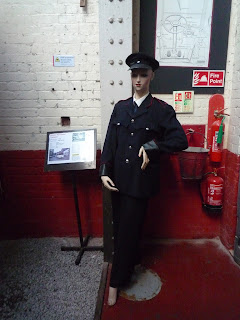 It was a giant light-up machine, like something off the original Enterprise.  Clunky buttons and shiny colours and swooshy fonts.  It was the Picc-Vic machine. 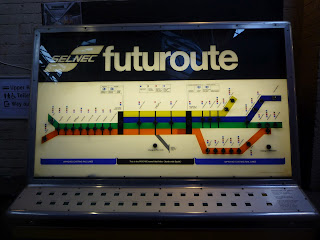 Futoroute is a rubbish portmanteau word.

Produced by SELNEC - the appalling acronym for South-East Lancashire North-East Cheshire which was replaced by the far more pleasant but still clunky GMPTE - it was intended to show people how the Picc-Vic scheme would help them.

Basically it was Merseyrail's Northern Line, only in Manchester: an underground tunnel which would connect local services into Piccadilly to local services into Victoria, with three stations under the city centre.  It was a simple, clever, effective plan that would aid travel across the city as well as providing capacity relief at the mainline stations.  There were stations at Princess Street, Albert Square (with a travelator to Oxford Road station) and Royal Exchange, and it looked marvellous. 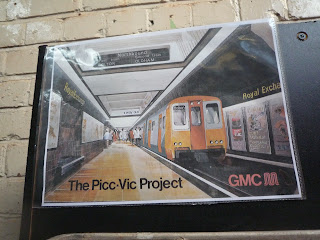 Unfortunately it came too late.  The plan was conceived in 1974, just as the oil crisis was biting and the Government were tightening their belts.  Whitehall refused to provide funding and so the plan died.  On the plus side, it meant that Manchester got trams as a solution to its traffic problems a few years later but still... UNDERGROUND STATIONS!  Underground stations make everything better.

Ian and I had a play on the machine, which still works after nearly forty years, planning imaginary routes across the city.  We agreed that the machine made the entire visit; it was worth the price of admission on its own.  We wanted more, a far more detailed and creative and fascinating history of this might-have-been.  Your tolerance may vary, of course.

We swerved past the tea room - we were the only people in the whole place and we didn't want to be interrogated by the volunteers about our visit - and re-emerged into the daylight.  It was an interesting hour, mainly for the Picc-Vic machine I admit, but if you're a bus fan it'll be right up your alley.  It's certainly a diverting way to spend some time, and I enjoyed it more than MOSI.  A bit more about trains and trams would be appreciated, though.  We don't all get excited by diesel.
Posted by Scott Willison at 20:36