Testing the Limits of Friendship 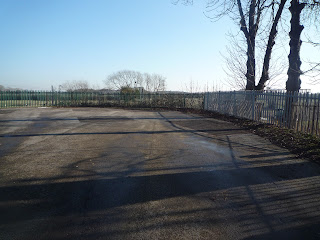 Why are we here?

I was grappling with the question myself, but at a much less lofty level.  I was stood in an abandoned car park in Staffordshire on a frosty Saturday morning.  Ahead of me, Ian and Robert were taking photos of empty railway tracks. 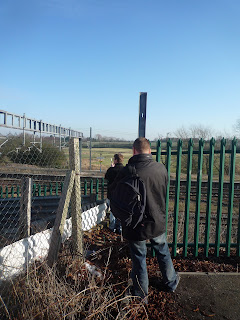 Why are we here?


The actual, simple reason was that Robert was doing another of his Station Master blogs, and Ian and I were along for the ride.  Yes, we were here in Norton Bridge voluntarily.  Probably the first people in a long time.

Norton Bridge is - and I'm going to use a technical term here - a shithole.  It's a barely-there hamlet of undistinguished local authority houses and miserable small holdings outside Stafford.  It has a red-brick church and a square of grass with some benches on it.  It has a pub, the Railway Inn, which serves food  weekday evenings but not at all on a Sunday.  It wasn't open, anyway.  There is no shop, no cafe, no village hall with roses curling round the door. 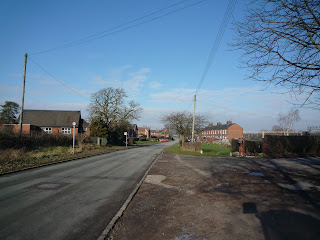 And, of course, there was the station.  It closed in 2004 when the upgrade of the West Coast main line meant providing a service here would get in the way of proper trains.  The closure was then underlined by the removal of a rotting footbridge, which left the platforms isolated in the middle of the tracks with no means of access. 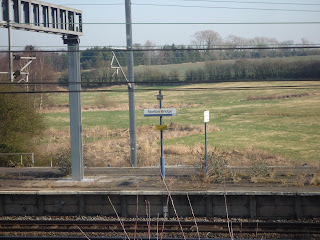 Personally I think that they removed the station in a bid to make Norton Bridge disappear off the face of the earth.  Give it a few years and they'll blow up the road into the village as well and that'll be it.

We had an hour to kill until the bus out of there.  An hour.  A wander round the local streets revealed, yep, everywhere else was as drab as the village.  Some sheep showed a mild interest in us as we passed.  A man walked his dog.  There was a closed petrol station.  I contemplated suicide.

We headed back to the rusting, graffiti'd, fag burned bus shelter to wait for the bus.  Robert had planned the trip, working out the times for our visit, so naturally Ian and I turned on him.  Things then took a creepy air when he revealed he had condoms in his handbag manbag; suddenly it all seemed a bit rapey.  Ian and I pressed ourselves up against the far end of the shelter while Robert ate his sandwich. 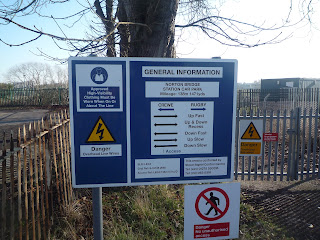 The bus arrived, taking us away from the Straw Dogs remake we seemed to have wandered into, and carried us back to Stafford railway station.  It was built in the Sixties, with the electrification of the line, and it's quite hideous. 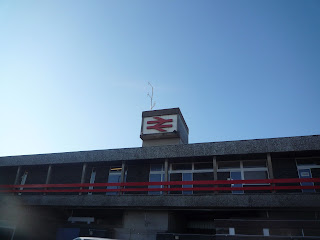 I'm not against the use of concrete for buildings, but it needs to be maintained.  It's not a building material that can be abandoned to the elements, especially not in a country as wet and cold as Britain.  Municipal buildings constructed out of the stuff end up looking horrible because the authority responsible has other things to spend its money on, rather than cleaning and scrubbing the walls.  The concrete structure ends up looking grim, while cracks are just patched up rather than being addressed. 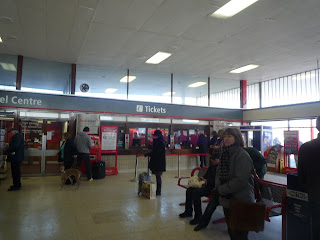 Mind you, Stafford station wasn't exactly an architectural masterpiece to begin with: this was no brutalist landmark like the National Theatre or the Barbican.  It's a series of long concrete structures threaded along the lines with draughty exposed platforms.  Wood had been used as an accent, but again, it hadn't been maintained and it had been varnished black.  Stafford is the only station I've ever been to that has a poster for the Samaritans in its cafe. 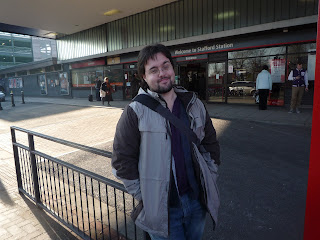 Thank goodness for Stone.  The morning had thrown up - almost literally - some grim architecture, but Stone station was a triumph.  Built by the North Staffordshire Railway and opened in 1849, it's astonishingly pretty. 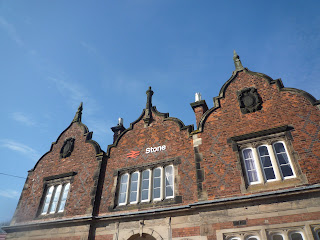 It's wonderfully symmetrical (always nice for my OCD) and has ornate windows and rooftops.  It's Tudor done by the Victorians, Hampton Court on the iron way, and a real triumph.  It's also only here by the grace of God or rather, Network Rail; the station was actually closed at the same time as Norton Bridge, but was reopened in 2008.  Too late for the building though, which is no longer in use for railway purposes; you have to buy your ticket on the train. 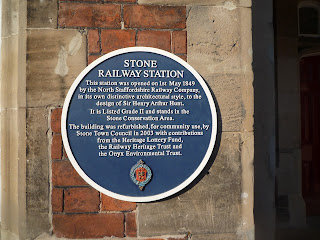 It was closed and shuttered - the "community use" didn't seem to be happening - which is of course a tragedy.  I suspect that behind the locked doors was a waiting room with an enormous stone fireplace, haunted by Victorian ghosts. 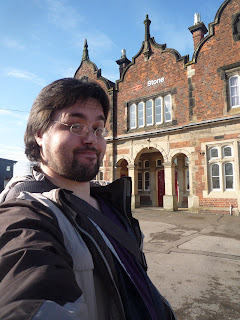 Despite its uninspiring name, Stone itself was another delight, a pleasant middle England town.  This was real Daily Mail territory; I nervously awaited the pitchfork wielding locals to drive us out of town for lowering the tone.  The Conservative constituency office was on the High Street, for pete's sake.  I was tempted to assume a Croation accent and ask the way to the Benefits Office, just to see what happened.  We paused for coffee and a panini in the local Costa (well, Ian and I did; we didn't have our Dads make us a packed lunch unlike some other people).  There was a boy in there strumming on a small guitar - it may even have been a ukelele.  I should have stabbed him to death with a wooden coffee stirrer.  There is absolutely no excuse for playing a musical instrument in a coffee shop, unless your name is Phoebe Buffay. 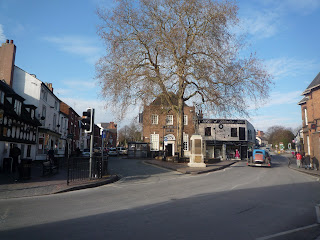 There must have been some vodka in the coffee, or something, because between Costa and the bus stop I managed to fall over completely.  My foot just stumbled on the kerb, pitching me sideways and onto the pavement, grazing my arm.  Fortunately there was hardly anyone around to witness my humiliation, just Ian and Robert, which was bad enough.  And now, I suppose, you readers.  In fact just ignore this whole paragraph.

We were heading for another rail replacement bus, and we were the only boarders.  It swung through Staffordshire's country lanes, occasionally scraping a kerb with an audible grinding sound, before we were dropped off in the village of Barlaston.  This was a vast improvement on Norton Bridge - it didn't just have a shop, it had a row of shops, plus a Londis and a garage. 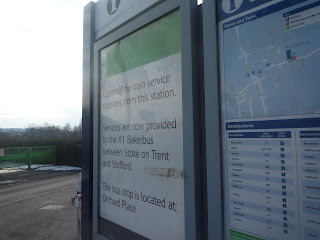 The station here was closed in 2003, though of course, in the world of British railways, it's not that simple.  The station is technically open.  If you want to close a station you have to go through a palaver of getting Government permission; it's a lot easier for the rail company to just lay on a bus and pretend the station's still there. 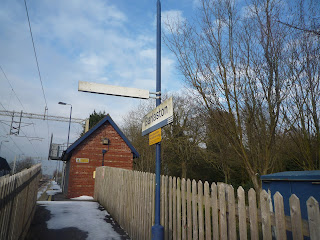 In the meantime, they've blocked off the platforms and the station buildings.  Spiked planks have been laid down at the ramps from the level crossing, while the gates have been nailed shut.  Even the waiting shelters have been boarded over, just to stop the local scallies from hanging out there and causing a ruckus. 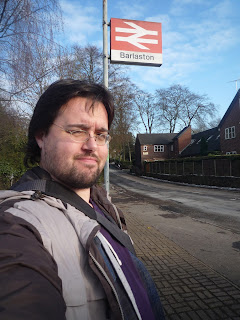 From there we headed down to the frozen canal.  It was a simple matter on the map - a wander along to the next closed station on the line, Wedgwood.  The problem was we'd forgotten how cold it would be.  Robert and I had come from a Liverpool that was, while chilly, completely snow free, while Ian was here from a London that was sitting under several inches of white.  Staffordshire had combined the two into a lethal combination: ice.  What little snow there had been was now shiny, glassy ice, right across the path. 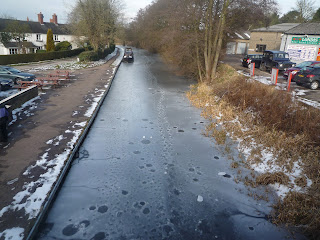 We tramped onto the verge, where the ice hadn't taken hold, and found a new hazard - dog shit.  The residents of Barlaston should be ashamed of themselves.  No-one seemed to believe in picking up after their animals, leaving wet piles of abandoned faeces to be skipped over.  Our ankles moaned under the effort of the trudge, and our trainers skidded on the occasional hidden patch of ice.

"If I fall in, please save my iPhone," said Robert.

"Did I mention I can't swim?" I replied. 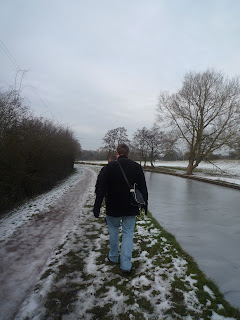 Wedgwood is actually inside the factory estate, and was built mainly to carry employees to work.  The acres of car parks around us showed why its "closure" hadn't been missed. 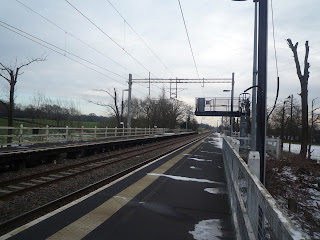 The station's got the same treatment as Barlaston - locked gates, scuppered platforms.  There's no platform structures to be closed, as the old station building was turned into a residential home a long time ago.  The house had a level crossing gate at its entrance, which was a nice touch, and an NSR crest embedded in a gable. 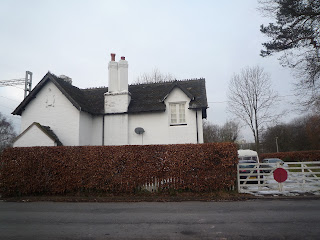 There's no station sign at Wedgwood so I pressed myself up against a poster with the name on it.  It was the best I could manage, and I posed for Ian to take the photo.  I'd forgotten that this pose would make my gut glaringly obvious.  Please only pay attention to me from the neck up. 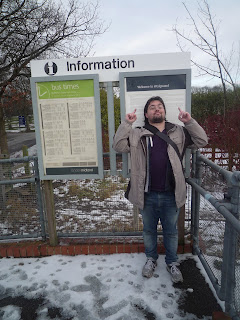 You can see why they removed the stations from the services; it's an incredibly busy route.  The level crossing closed three times while we were there, letting Pendolinos, Voyagers and Desiros burn through at top speed.  Think of those trapped behind a quiet stopping train.  It makes a nice resting place for trainspotters though. 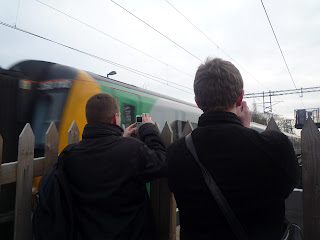 It was time for another bus out of town.  I missed the trains.  It's not the same, visiting stations without a train inbetween.  I know technically it was a rail-replacement bus, so technically it was as close to a train I was going to get.  It just wasn't as fun.  I don't like buses, never will, and having their drivers treat country lanes like the Nemesis ride at Alton Towers will never endear them to me (or my stomach).

Heading home meant our fifth station of the day, this one being Stoke on Trent, and very much open.  It's another beauty.  The North Staffordshire Railway company constructed their station around a brand new civic square, with a hotel on the other side and a statue of Josiah Wedgwood in the centre.  It's a grand, dark red building with imposing stone details. 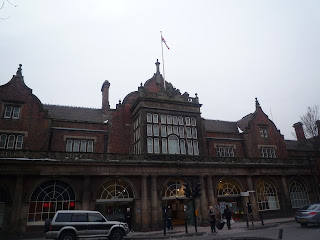 Virgin have also spent a nice sum modernising it.  The heritage features have been cleaned and enhanced.  Glass doors provide a classy way into the bright ticket hall, with automated ticket machines and a cafe. 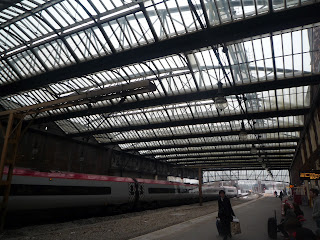 And the roof... I love the roof.  The zig-zag glass that crosses the track makes the station feel open and elegant.  It's bright and attractive, and it's different from the glass arch the Victorians usually go with.  The only arch inside is one constructed as a memorial to those lost in the First World War, from the station building onto the platform. 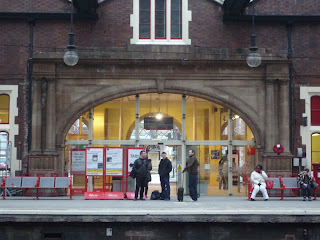 The only thing the station's missing is a sign.  There isn't a single one outside.  How ridiculous.  How obscene.  I'm tempted to write a snotty letter to Virgin demanding they install one.  I had to settle for a picture with a platform sign. 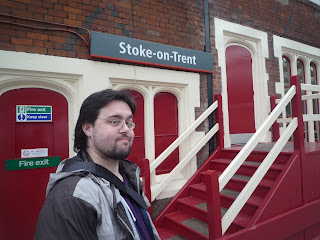 Ian boarded his train to London, and Robert and I headed for platform 2 so we could go North.  I was tired, exhausted from the long day, but happy.  I'd had fun.  I'd enjoyed the talks and the laughs.  I thought back to that question earlier.  Why are we here?  The answer was, to have good times like these.  To laugh and chat and smile and enjoy your day with your friends.  That's a good enough reason. 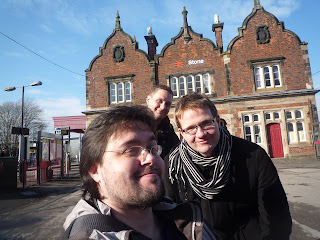 A post about my little corner of the world! I've wondered for a while what the rest of Norton Bridge was like, the platforms in the middle of the train tracks really are quite odd.

Fantastic! Looking forward to reading about your trip to Polesworth.