After months of denial I've finally decided to do something about it.  No more bread or potatoes - I'm on the Atkins, swallowing eggs for breakfast instead of a yoghurt, which feels wrong.  No tea or dairy of any kind.  No booze.  And exercise.

My exercise options are limited; I haven't done real, proper, physical exertion since that blessed day when I stopped having to do P.E. at 16.  This is because I think spandex is the cloth of the devil, and that no-one who says their hobbies include "going to the gym" is worthy of conversation.  But I love to walk, as this blog will attest.  I can walk for miles without thought or a moment's hesitation.  So I've adopted this, the David Mitchell Workout Plan, as my program of choice.  Ok, it's not exactly going to get me a body like Daniel Craig, but so long as things stop wobbling when I run, that's fine with me.

Plus, walking enables me to visit some of the places close by I've meant to cover for the blog, but haven't got round to it.  A quiet Sunday afternoon gave me an opportunity, so I walked out towards Higher Bebington and the down Lever Causeway. 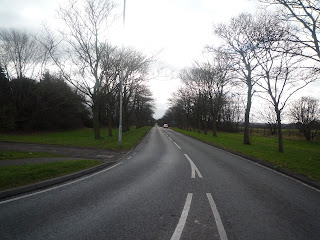 It feels odd to find such a straight road in England; no bends, no deviations.  We're so used to roads twisting back on themselves and having a sudden kink in the middle because there was a rock there in 1366 and no-one could be bothered moving it.  This road was built by Lord Lever, the soap magnate, along with a couple of ones that have fallen out of use, as a way for him to get from his home at Thorton Hough to the factory in Port Sunlight as quickly as possible.  It makes me think of him as Toad, barrelling along the road in an open topped bone shaker, shouting "poop-poop!" and pushing its engine to its limits.

There's no footpath, so walkers follow the bridleways on each side on the grass.  I was feeling quite pleased with myself for walking just this far, until a man who looked like Gandalf's older brother jogged past swathed in yellow lycra.  I secretly hoped he'd get his foot caught in a hoofprint and break a hip.  That'd learn him, the healthy bugger.  For such a well made road, the Causeway doesn't really go anywhere.  The only place this road goes is close to Storeton, and even then, it bypasses it.  I decided to go through the village, which I'd never visited before. 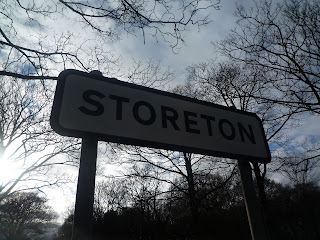 A minute later, I'd walked right through the village and out the other side.  It's minimal to the point of insignificance - there's just a few stone houses and farmyards, no shop, no pub, not even a church.  It was pretty enough, but I couldn't see the appeal in living here.  And I certainly couldn't see why you'd build a railway station here.

The original station on what's now the Borderlands Line, opened in 1896, was called Barnston, but in 1900 it was renamed Storeton For Barnston.  I'm not sure why.  This tiny hamlet - which must have been even tinier a hundred years ago - doesn't seem to be a suitable draw for a railway company.  I wonder if they thought the low passenger numbers were due to the name, rather than its position in the very centre of rural Wirral. 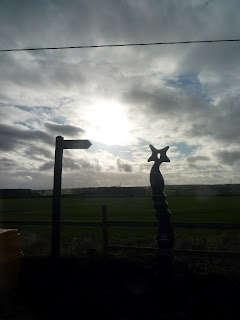 I returned to the main road, which was again without footpaths, and trudged on.  I was enjoying the lazy pace, the singularity of my presence in the countryside.  It was a bright day, but I was listening to an audiobook, Charlie Connolly's Attention All Shipping, so my mind was filled with frosty days in the Faeroe Islands.  I heartily recommend an audiobook if you're out walking - far better than another load of mp3s on your iPod.  His clambering through Icelandic storms did put my five mile walk in perspective, though; it was a good effort, but I wasn't exactly Scott of the Antarctic.

The road passed over the M53, and I took a moment to gaze down at the barrelling cars, hammering their way through the centre of the peninsula.  It all seemed so fast, so unsuited for a Sunday afternoon.  Where did they need to be at 70 miles an hour?  It just didn't seem right. 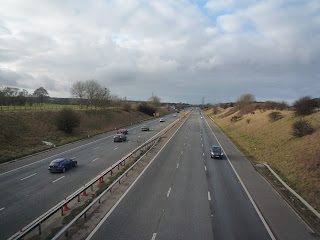 A few more twists of the lane (that's how you build a road in England, Lord Lever!) and I was at the railway crossing.  It's just a bridge now.  Apart from the fact that you're on "Station Road", you'd have no clue. 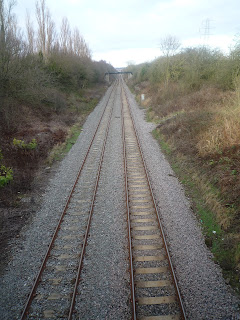 There used to be two platforms here with a low station building, but it closed in 1951.  The Borderlands Line's always wheezed along, barely managing to stay alive, so it's no surprise that they culled the underused stations quite early.  There was a goods yard too, which stayed open for another decade, but which is now just some industrial units. 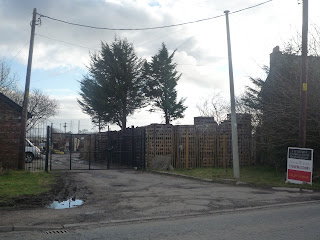 Back on the bridge though, if you look hard enough, you can spot one sign there used to be something here. There are two bricks on the bridge wall - an older one at each end, with a newer type infilling between them.  In addition, the sandstone caps on top of the wall are replaced by utilitarian concrete in the centre.  This'll be where the building was once. 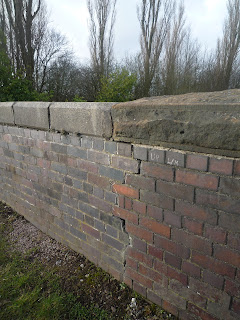 I left the old station site behind me.  There wasn't much to hang around for, let's be honest, and besides, it made me a bit sad: visiting the site of a dead station.  A bit ghoulish.

I was soon being tickled by the tendrils of Barnston village.  Again, I wondered why they called it Storeton for Barnston when the latter village is bigger, more interesting, and closer to the station.  It's got a church, a pub, a school, everything Storeton didn't.  It was as though someone renamed Lime Street Birkenhead (for Liverpool).  Just another example of railway company perverseness.

Even if the Borderlands Line is incorporated into Merseyrail, there are no plans to rebuild a station there.  This had seemed a bit strange to me - there's quite some distance to the next station, and there is a centre of population that could be served by it.  When I passed some people playing tennis on the court in their garden, I realised why.  Barnston is seriously rich.  No-one here would lower themselves to using public transport.  You could lay on the Royal Train for the residents here and they wouldn't bother using it.

I paused for a moment outside my favourite store on the Wirral, the Barnston Village Hat Shop.  I love that this small village is able to support a retailer selling the most pointless and unnecessary item of fashion this side of a handbag-sized chihuahua.  I didn't see a Post Office or a Co-op, but the villagers are sorted for all their fascinator requirements. 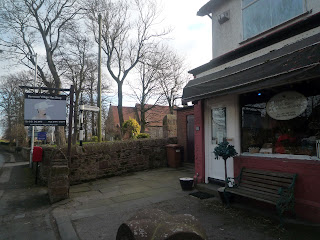 There was a pub just beyond it, the Fox & Hounds, and I thought I'd get myself a drink and recover from my trek.  I went through the first door into the pub.  Big mistake. 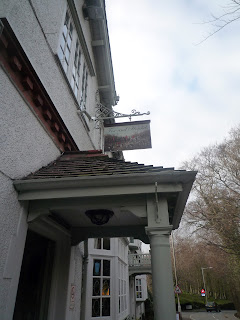 I'd wandered into the snug.  It was smaller than my bathroom, and rammed with locals, ruddy faced, bearded, cheery.  They stopped and looked at me as I entered, something I didn't think actually happened in real life.  I couldn't turn around and leave, not in a space that tiny, so I had to brazen it out.

And I was tripped up by my diet.  Normally I'd have ordered a pint of something brown and frothy, with a name like Old Dickerson's Mange, but instead I had to order this: 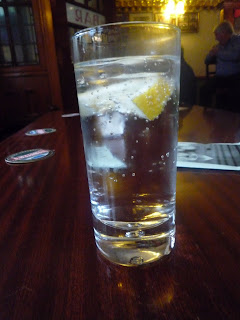 A mineral water.  A bloody mineral water.  I could feel the disdain from the locals.  I collapsed into a vacant chair, under the flatscreen showing the racing, and buried myself in my drink.  Even that was a mistake, as I began to realise that the table was probably empty because it was reserved for one of the regulars - Pete or Mick or Dave or something else dependable.

I'm sure the pub is lovely.  I'm sure if I'd wandered into the Lounge instead, I'd be singing the pub's praises - it looks marvellous from the website.  Instead I cowered under the Callaghan-era Carling Black Label clock and the pub trophies and wondered how long I could brazen it out before I died of shame.  As each new patron arrived, they chatted amiably with people they've probably know for decades about the upcoming Liverpool-Brighton match, and I became even more anxious.  Don't ever talk about football in close proximity to me.  I'm begging you.

Finally I faked a call on my mobile and left.  Yes, I actually did that.  I'm not proud - I'm more than a bit ashamed - but it seemed the only dignified way to leave the pub before I'd finished my drink.  Strange that after all that walking, this was the bit that made me sweat the most.  Shyness is a terrible affliction.
Posted by Scott Willison at 11:20

Because of this post, I have started doing abdominal crunches and twists at my desk at work, for fear you will be thinner than me at Liverpool Pride this year. You disgust me, Willison.

Storeton is also the site of the Storeton tramway line to Bromborough. http://en.wikipedia.org/wiki/Storeton#Storeton_Quarries_and_Tramway

You poor thing ! You make me feel quite guilty, as I sit here, sipping my expresso and performing oral-sex on the three cream-eggs I've just stuffed. In my opinion, you're not fat until you can no longer see your willy when you pi$$ ( unless, of course, you are exceptionally well hung).

Keep up the good work !