I'm quite impressed by Merseyrail's new advertising campaign.  You've probably seen the posters all over the network, telling you how much you could save if you went by train instead of rail.  Apparently you could save enough for a cruise, or something.

The problem with a poster in a train station is you're preaching to the converted.  They've already bought a ticket.  So Merseyrail have taken the war to where it'll hurt motorists the most: the petrol pumps. 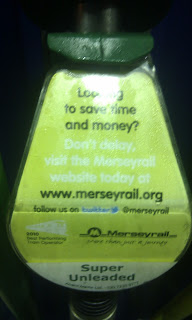 This was at Sainsbury's in Upton earlier this evening.  How effective it is would be another matter.  The Bf was doing the filling up, and he didn't notice it at all.  He was too busy staring at the price of the petrol.

Nice try though.
Posted by Scott Willison at 22:52

Email ThisBlogThis!Share to TwitterShare to FacebookShare to Pinterest
Labels: advertising, Merseyrail, The BF