I Think That Living With Them Is Bringing Me Down, Yeah

There's an MtoGo at Lime Street now.  A dinky one tucked in the corner.  Ready to fulfil all your ticket and Mars Bar requirements.

It means they've demolished the old 1970s ticket office, and replaced it with a tiled floor pattern showing the city's skyline: 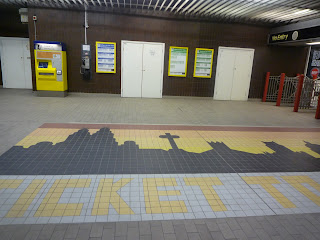 But wait!  What's that written underneath? 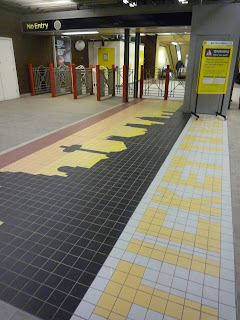 In short, I think it's been done.

Can we just try something new now?

Here are ten equally suitable songs by other Merseyside bands that they could have used instead.  Ones that haven't been done to death.

Frankie Goes to Hollywood - Relax
Atomic Kitten - It's OK!
Cilla Black - Step Inside Love
Echo & The Bunnymen - Bring on the Dancing Horses
The Zutons - It's The Little Things We Do
The Coral - Don't Think You're The First
The Farm - Groovy Train
Lightning Seeds - Marvellous
OMD - Locomotion
Gomez - Catch Me Up

Obviously some are more appropriate than others, but you get the gist.

You're welcome.
Posted by Scott Willison at 15:47

All in preparation for the introduction of the Walrus Card. Googoogajoob!