Can I Get A Widnes?

I've been accused of having something against Widnes, but that's not the case. Due to a series of circumstances that are frankly too dull to detail here, I managed to miss it off the Warrington branch of the City Line. It was nothing personal, just one of those things. Ever since then I've been meaning to go back, but either haven't got around to it, or something else has got in the way.

Finally, on a January Saturday that could best be described as "miserable as sin", I managed to drag myself to Lime Street for a Northern Rail train to Halton. I believe it was a train; the amount of dirt clinging to the side made it look more like a recently surfaced hippo, but fortunately once you'd got on you couldn't see the filth (or out the windows). To try and pep up the journey, I'd invited Robert along to bring his unique blend of sarcastic rudeness and railway factoids.

He joined the train at Liverpool South Parkway, and brought with him a present - a "sorry I forgot your birthday" card. Yup, I turned 34 a couple of weeks ago, and, incidentally, THANKYOU constant readers for remembering. It's not like I don't dwell on my own impending mortality every year about this time, but there you go; you people are fickle and uncaring, I understand that. 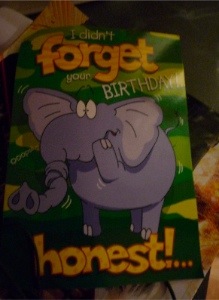 The train whizzed through depressing, January countryside towards Widnes. It really is an astonishingly miserable time of the year. England gets shaken down, stripped of anything beautiful and made ragged and rude; even the green grass looks like it's been molested by a drunken suitor. It's bare and cold, and it wasn't helped by the clingy fog, obscuring views of more than twenty metres.

Incidentally, I'd like to make a complaint; the old lady in the seat behind me had a Merseyside-only travel pass, and the ticket inspector chose not to charge her for the trip from Hough Green to Widnes. Outrageous! If she'd been a teenage hoodie, he'd have whipped the pennies out of her pocket, but just because she's got a blue rinse he let her get away with murder. I made sure to direct particularly resentful psychic energies in her direction. 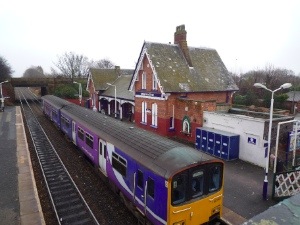 So: Widnes station. It's a pretty standard Cheshire Lines building, like the ones at Hough Green or Sankey (for Penketh); a little pointy roofed station house with an extended single storey side building containing the ticket hall. The house had been converted into "Debbie's Salon", which promised eyebrow perming. I have no idea what this involves, and nor do I want to ever find out. Thank God I'm a man.

Inside the ticket hall was a little plaque commemorating a moment in 20th century pop music: 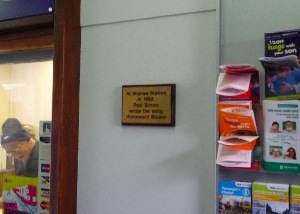 A couple of points about this. Firstly, it's pretty much agreed that he didn't write Homeward Bound at Widnes station. The generally agreed location was the now-closed Ditton station, which is on the Liverpool-Runcorn line, with Warrington Bank Quay throwing its hat in as a secondary bid. Paul Simon himself seems to think he wrote it at "Liverpool" station, so I'm guessing he just assumed anything north of London in the Sixties was "Liverpool".

Secondly, Homeward Bound is a rubbish song, and doesn't deserve a plaque in the first place. Paul Simon's done a grand total of two good songs in his life: (a) Mrs Robinson and (b) You Can Call Me Al, though the latter is mainly because I really liked the video when I was young and I actually thought Chevy Chase was the singer:

Anyway, Homeward Bound is a sentimental dirge, so frankly I wouldn't bother commemorating it. Even if Paul Simon was married to Carrie Fisher once and is therefore amazing-adjacent. 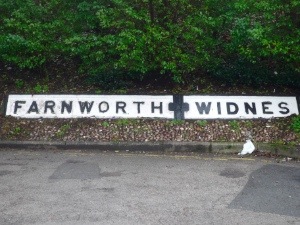 The above sign in the car park commemorates the fact that we're in the Farnworth parish of Widnes. Which is nice, and totally relevant.

Since I had a second body to play David Bailey, you've been spared the up-the-nose shot: 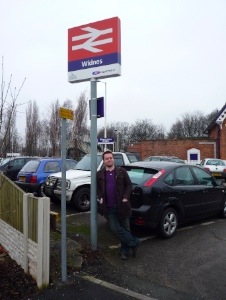 From there, we headed into town. I already had the adjoining stations, so there didn't seem much point in going and checking them out. Instead Robert and I decided to look at the wonders of Widnes town itself. First up was Victoria Park, almost directly opposite the station and a classic example of 19th century gentrification. It had it all - a pond with a fountain, a war memorial, a band stand. It also bore the signs of a National Lottery-funded rebirth, in the form of a glass and steel pavilion serving coffee. There didn't seem to be anyone in it though.

Another 21st century intervention was a nature path, and Robert and I ventured into the trees to follow it. It had been specifically designed to encourage wildlife in the park, with birdboxes, bat boxes, and squirrel food all on show. There was also this: 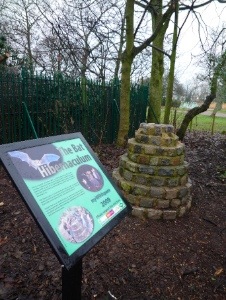 which is a man-made nest for bats to hibernate in. Robert bravely peered inside, but couldn't see any. Neither did they all come swarming out to attack him like that bit with the Penguin at the end of Batman Returns.

Later on the path two nice middle class people dumped their dog's faeces on a Bug Home, like it was a bin, which shows that no matter how polite people are, they'll still get rid of a turd as soon as they can.

Beyond the park was Widnes proper. I was a bit disappointed that you could only see the Silver Jubilee Bridge in the fog if you really concentrated hard, and also squinted a bit. I'd imagined it rearing up over the town, dominating every view, but the filthy weather meant it remained shrouded. Robert was already regretting his decision not to wear a coat, and jammed his cold hands into his pockets to keep them warm.

We reached Widnes town centre and were greeted with this lovely notice: 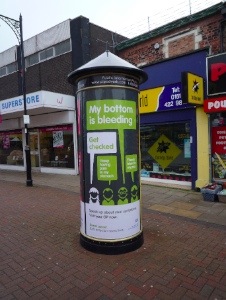 Classy. After that it was a mish-mash of small pedestrian precincts, filled with a mix of chain stores and down at heel independents. It was a typical mid-sized town, struggling to compete with the big cities around it and maintain a vibrant shopping community of its own. We wandered round the WH Smith because I had a voucher, but it pains me to say there was nothing worth buying. I worked in Smiths in Birkenhead for nearly five years as the uberfuhrer of the Entertainment section; shelf after shelf of videos, CDs, DVDs and computer games. It was really quite depressing to see that all they stocked in Widnes was two drops of the most popular DVDs - no music, no software, nothing. (Though admittedly the pitiful excuse of a WH Smiths in Liverpool One is the most depressing thing of all). I couldn't find anything to spend my money on, which is a story in itself.

I should also note that Widnes has two Argos's (Argoses? Argosi?). I'm not sure why. Perhaps they take competition very seriously. The woman outside the one in Albert Square was very keen to hawk the new catalogue.

We eventually ended up by the market. While Robert had a quick pee in the gents, I took a picture of some interlinked shopping trolleys. It was that kind of place. 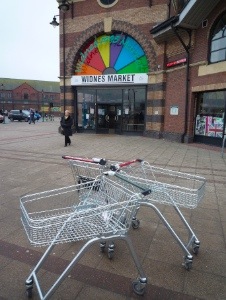 By this time we were both hungry and thirsty, but the first pub we came across was showing a football match, so that was out. We ended up in the FM Caffe, which we'd already spotted on an earlier circuit. I have to admit we hadn't been over keen, because they can't spell cafe. I know that sounds snobbish, and that's because it is. 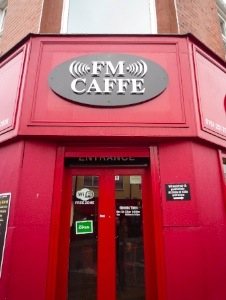 Thankfully we put our prejudices aside, and consumed some delicious paninis and lattes. We managed to resist the incredibly tempting All-Day Breakfast, me because I didn't want to stuff my face, and Robert because he doesn't like baked beans. No, really. Freak.

It was very satisfying food though, and reasonably priced too. Plus they were playing Harry Connick Jr. Highly recommended. Just look at the joy on Robert's face. 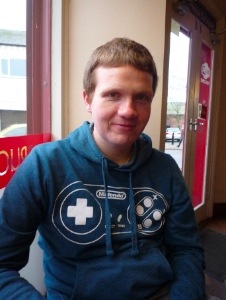 And that, I'm afraid, was that for Widnes. I hope I haven't sounded too down on it. It was exactly what I expected: a mid-level North Western town, like Birkenhead or St Helens - a little dowdy, a little rough round the edges, but sparkled with the occasional gem that caught the light. The people seemed happy, friendly, the shops were compact, the architecture pretty and not excessively bland or horrific; it was a nice little average place. We didn't leave because it was driving us to drink - we just left because we wanted a drink in our regular pub, so we headed back to Liverpool, where Robert got a bit smashed and confessed things I shan't share on a public website. 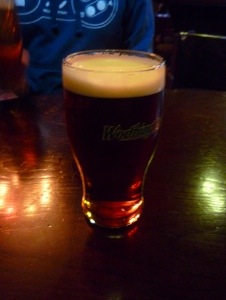 A pretty satisfying day all round, I'd say...

There should be more bat bins.

The name in the car park is a reminder that that station was originally and for many years called "Farnworth" and later "Widnes North" - at a time pre-Beeching when there was a proper Widnes station in the town itself on a loop which left the main line at Hough Green Junction (yes!) and rejoined it at Widnes East Junction (now gone). The town station would have been more convenient than that trek into town. Suspect Beeching closed the wrong one.. Chris.

Robert is no freak. I hate baked beans too.

Haha! If ever a plaque deserved the reaction: "Oh. Right." it's that one!

In that picture Widnes Market *almost* looks like Clayton Square.

I also hate baked beans. There are quite a lot of us you know.

Baked beans are acceptable in a cooked breakfast, as long as they are kept some distance from the eggs and you use a sausage as a breakwater.

No, I'm sorry; all you anti-baked beans people are nutters. What did you eat when you were kids? Tofu and fish fingers?

I should have guessed that WIdnes was originally Farnworth; it was ridiculously miles out of town. Robert and I considered visiting the dead stations but there didn't seem much point - it's all gone...

Whats wrong with getting molested by a drunken sailor - I have never had any complaints!

Widnes is a funny town, but it is my funny town! Did not know that bit about Paul Simon not actually writing 'homeward bound' there - it did always confuse me how he could have ended up in Widnes though, pretty hard to pass through and have to actually stop, not a terminus or anything..