Part One of a Two-part trip: for the second part, click here.

I'm not keen on Valentine's Day. I don't approve of any festivity that relies on guilt for its power; in a similar vein, I don't like Mother's Day (but I understand that if I didn't get my mum a card at least, my life would not be worth living). Plus, the Bf and I have our anniversary two days before, and that's far more important to our relationship.
He wasn't bothered therefore when I said I'd rather spend February 14th romping round Cheshire looking at train stations and not spending it with him. He's good like that. So I was up and out the door and on a train to Greenbank by 10 am. 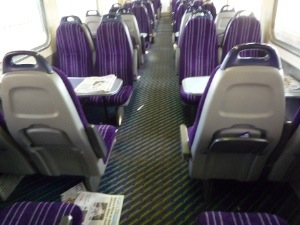 The train was a mess, incidentally. I'm a big fan of Colin Firth, but I got kind of sick of seeing his face stare back at me from a thousand copies of the Metro. I like the idea that you leave your newspaper on the train for someone else when you're finished. It's a polite, generous, British thing to do. I don't like people slinging copies of a freesheet all over the place so it looks like there's been an explosion in a printing press. Take the Metro with you. Mind you, I'm baffled why anyone picks it up in the first place; it's rubbish.
I got another little shock as I travelled down the Mid-Cheshire Line: an Attractive Local Feature Board! An ALF! Ok, it's not a proper ALF, but Delamere now has a nifty little sign provided by the Forestry Commission underneath its name plate. I had to take a pic out of the train window, so it's a bit blurry and grimy, but it's nice to see - it wasn't there when I visited last year. More please. 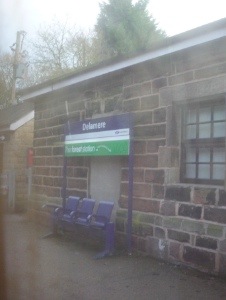 Anyway, Greenbank. I'd considered getting here via Hartford station, as the Merseyrail map indicates that they're close enough to be an interchange, much like the two Wigan stations. However, if I'd done that, it would have destroyed the binary stars of Hartford and Winsford in my head. It's one of those patterns that for some reason have established themselves for me; a twinning. So instead I took the Northern Rail train straight there and jumped off. 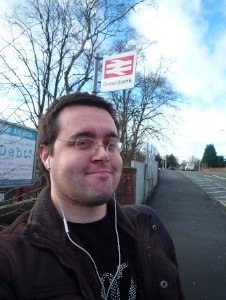 Let's be honest: that is a shit station sign. Just awful. It looks like it was knocked up by the local school kids out of cardboard. One good rainstorm and it'll be gone. Greenbank also has nothing in the way of customer facilities, apart from the usual bus shelters on the platform. I'm afraid the station building has been annexed: 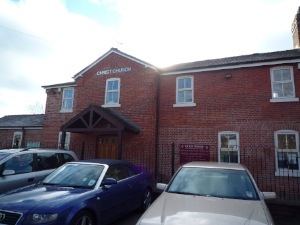 They seem to have extended it, and refurbished it, but I'd still much rather see a station building as, you know, a station building.
I trudged on into the town, with Blur banging in my ears. They are my favourite band of all time - great tunes, great performers, just brilliant. I'd already listened to The Great Escape on the train, and now I'd worked my way onto Blur, their self-titled album from 1997. We used to have that CD on an almost permanent loop in our student house - that, Gina G's Fresh and the Evita soundtrack. We were nothing if not eclectic. In fact, here is our student kitchen, with the Blur poster on the wall: 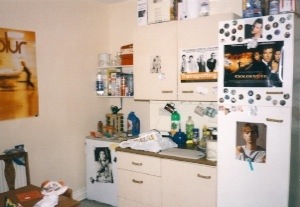 My cupboard was the one with the GoldenEye poster, if you hadn't already worked it out.
It meant I entered Northwich on a bit of a high - a good soundtrack does that for you. I was further fascinated by a mural by a bus stop: 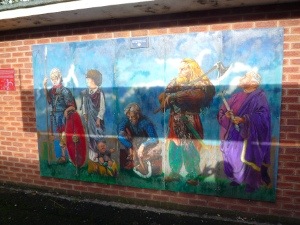 The mural commemorated Northwich's Roman past - as a historic producer of salt, the town has long been a stronghold. A nearby plaque further explained that I was standing at the entrance to Condate, a Roman fort that straddled the Roman road from Chester to York. It was part of a heritage trail, set up by the council as a memorial to a local historian, Brian Curzon. If I'd had more time, I'd have followed the whole trail, but I didn't know how far away from town I was and I didn't want to get distracted.
Northwich was already starting to charm me. I'd never been before, apart from a visit to the nearby Anderton Boat Lift about five years ago, so I hadn't known what to expect. What I had got so far was a pleasant, small town feel, strangely countryside like: I never felt that I was too far from trees and open fields, even when I was walking past burger bars and estate agents. It had that kind of air to the place.
I was even more pleased to close in on the town and find this fantastic bridge over the Weaver. 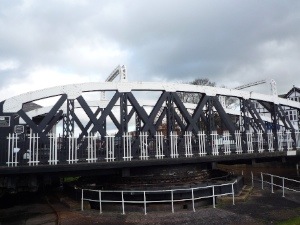 It's a swing bridge, straddling the river, and has been beautifully restored. It made for a suitably inspiring entrance into the town centre. 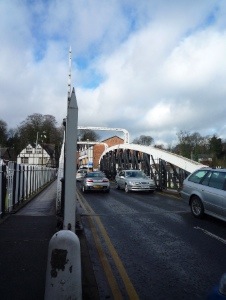 Now don't get me wrong; I know Northwich isn't Venice or Rome. It's just a small Cheshire town. There was something about it that appealed to me, though, something that made me smile. It had an undefinable charm. The buildings were a nice mix of Victorian and modern, the pedestrianised precinct had a good variety of shops, and the place was busy, even though it was only a Monday morning. It just felt good. 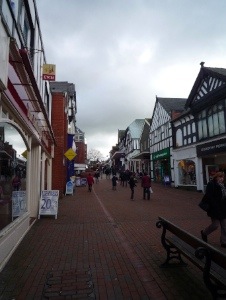 Perhaps I just liked it because there was a menswear shop called, without irony, "Gigolos". Sadly it didn't feature amazing pimp hats, tight trousers and thongs. 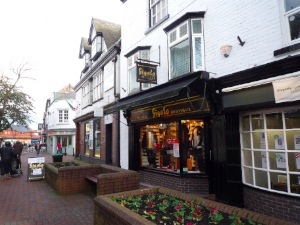 I stopped at a Wetherspoons for a sit down and the free wi-fi until my train. The place was heaving, even though it was eleven thirty, with a strange mix of pensioners and committed alcoholics. There was a group of what I would term "rock grandads" - leather jackets, piercings, body odour, about twenty years too old be looking like that - tucking into their full Englishes with gusto. In front of me, an elderly couple were having one of those utterly silent excursions that old people seem to manage - a cup of tea in front of them both, as they stared into the middle distance, not talking, not doing anything. There was another guy, in a flat cap, filling in betting slips with a copy of the Racing Post and a pint of bitter; he greeted half the pub as they walked in by name. It was homely and pleasant. The building itself used to be the main post office, and it had been tastefully restored - whatever your opinion of Wetherspoons as a company, you can't deny that they've managed to preserve a lot of old buildings that might otherwise have been abandoned.
Having said that, if the Bf announced that we were going to be taking advantage of their Valentines offer - two steaks and a bottle of wine for £14.99 - I believe a divorce would be justifiable.
Refreshed, I carried on to Northwich station. By now I was onto my third Blur album, their last, Think Tank. There was more efficient reusing of old buildings on the way, as this: 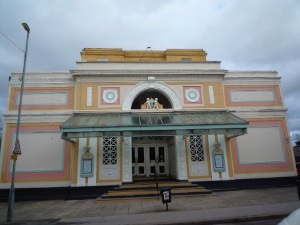 turned out to be a bingo hall.
Northwich station was a nice little blast from the past, not just because the next door Tesco store seemed to think it was 1986: 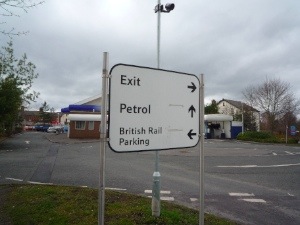 Finally, we had a railway station building that was still being used as a railway station! Admittedly, only part of it, the ticket office, and even then it closed at 2:30, but still: it was hope. It was also a well-preserved example of the Cheshire Lines style, restored, and clean. It had one of those big BR logos and the station name on the outside, right above the CLC name, which I love - I think it should be a legal requirement on all station buildings. 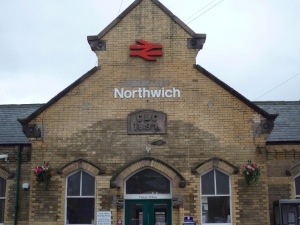 The station sign itself was in Tesco's car park, so I risked life and limb getting a pic. 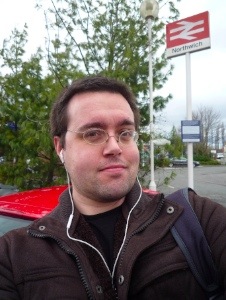 There was a curiosity inside the ticket hall. Amongst the usual Northern Rail posters and leaflets, there was a little framed photograph of a boxer. The caption read:

Lostock born Ray Wilding was employed in the parcels office at this station on leaving school in the 1940s.
His later career as a prominent heavyweight boxer saw him settle in the USA, where he fought in Boston, Chicago, Philadelphia and, on five occasions, in New York's world famous Madison Square Garden.
He retired from the ring in 1956 after 47 wins from 53 encounters and his name was honoured in New Jersey's Boxing Hall of Fame. Ray died, aged 65, in 1995.

I think that's brilliant. The quiet, dignified acknowledgement of a local hero, right in the centre of a 21st century train station. My dad was a massive boxing fan, so I grew up hearing all about them (for one terrifying moment, he considered naming me Stracey, after John Stracey) but I'd never heard of Ray Wilding. I love that he's commemorated in this tiny way. 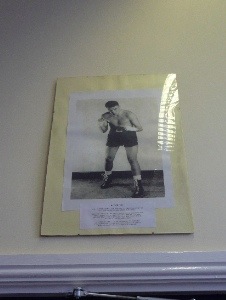 Buoyed, I headed out onto the platform, which was another little gem - baskets for flowers, benches, a big clock (which unfortunately didn't work - see blogs passim for my rants about station clocks). Admittedly, all the facilities were on one side. If you were waiting for a train to Chester you'd be cold and rained on. The Railside Cafe seemed to have realised this and its advertised list of features started with "It's Warm". I think that's underselling yourself, a bit. 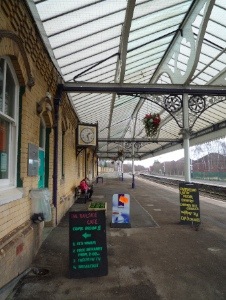 I had a little wander up and down the platform as it slowly filled with people. I liked Northwich. I liked its quiet buzziness, its understated charm, its politeness. I liked the way it seemed to carry itself with a strange grace - it wasn't a big town, it wasn't important, but it had a confidence to it. And of course, it had a decent railway station. Never underestimate how important that can be. 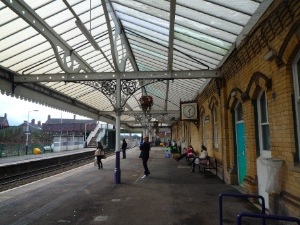 As a Blur fan, surely you know where this photo was taken?

London ice can freeze your toes like anyone, I suppose...

Someone who actually likes Northwich! Even I don't like it all the time and I was born here! You made me appreciate the positive things we do have - we've got TWO of thos amazing bridges. The bingo hall used to be a cinema called The Plaza and is indeed a lovely building. Keep up the good work - loved reading your blogs.

I also know Northwich well -- since the 1960s -- have lived here on and off. There's a lot more of Northwich than you saw -- it's very spread out -- but your 'snapshot' of the town captured it very well thanks very much. Some good things happening now (2021) and some poor recent development decisions, as everywhere. Your walk from Greenbank to the centre took you through one of my favourite parts of the town. I really enjoy reading your blog and what you are doing -- please keep writing!