Today is the 2nd anniversary of this blog.  Yay blog!  Frankly I didn’t think it’d still be here two years later.  I thought either I’d have lost interest and found something else to do with my time, or else I’d have collected the whole of the Merseyrail map and have started a new blog (I’m thinking Round the Maldives We Go – two years trying out the various beaches).

Instead I’m still plodding along, and I’m pleased.  Pleased I had the staying power to blog all this time, and for that I have to thank you, Faithful Readers.  There’s a lot of pleasure in writing, but there’s just as much pleasure in being read, and I’m always happy when people comment, praise and correct my railway terminology (yes Robert, I mean you).  So thank you.

I’m also pleased that the project isn’t complete yet, because I’m really enjoying it, as both a physical and a metaphorical journey.  It’s been fun, and it’s been fascinating, and at times it’s just been bloody bizarre.  And there’s still more to come!

I’ll stop now, before this turns into a Halle Berry Oscar speech.  I was thinking I’d celebrate the biannual birthday with a bit of tarting but, as I mentioned in my last post, I’m actually off work sick at the moment, so I couldn’t get out there.  Instead I’m going to celebrate with a list of five Merseyrail related things I have enjoyed over the past two years.  These are mainly oddities that I’ve wanted to mention previously, and haven’t been able to slot into the blog.

I’m a committed atheist, and have been for years.  I have absolutely no problem with religious people, of whatever faith, so long as they don’t try and convert me or condemn me to the pits of damnation or anything.  Whatever floats your boat.

However this has left a little void within me.  The problem with being an atheist is you don’t get any theatre: no christenings, no weddings, no Nativity of the Theotokos.  As a result I’ve developed an unhealthy obsession with certain bits of the religious world.  Nuns, for example; there is nothing which cannot be improved through the addition of a nun – no street scene, tv programme, or film.  Nuns are great.  I also love crucifixion statues, particularly very bad ones; and I like religious posters.  There’s a particularly magnificent one at Leicester Square tube station which I could stare at for hours.  Merseyrail can’t compare with that glorious insanity, but fortunately the Trinitarian Bible Society give us the next best thing. 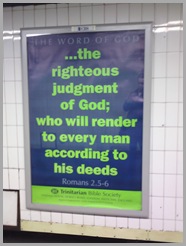 Love it.  I like a bit of wrath of God on my commute; this was on the Wirral Line at Liverpool Central. 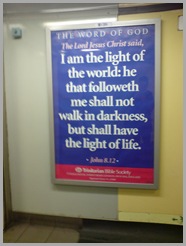 This one – slightly blurred, thanks to Beezlebub jogging my arm as I took it – was at Lime Street underground, and cheered me every morning, though it’s a bit wishy washy.  I might write to them and request a REPENT SINNERS OR WE’LL DELAY THE ELLESMERE PORT TRAIN at Moorfields.  That would be ace.

“Oh dear, I’ve said that the next train at Birkenhead Park will be in three minutes, and it’s late.  That will annoy everyone on the platform when I change to say five minutes.  What I’ll do is tick down to two minutes, and just leave it there.  I won’t count down any further.  Then, after it’s said ‘two minutes’ for ages, and the people are getting antsy, I’ll change it to ‘Here’ just as the train comes round the curve.  They’ll all be so pleased to see the train, they’ll completely forget my fib.”

These have showed up on the walls at the underground stations, along with a load of attractive grey and yellow signs, and they’re something I’ve been dying for Merseyrail to have for years: a simple diagram showing the stations the train will call at.  Merseyrail have actually improved on the London Underground model though, by showing you how many minutes it’ll take to get to your destination. 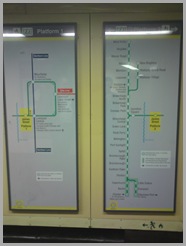 When they first appeared, the Bf, deeply cynical soul that he is, doubted the timings on the poster.  I’m pleased to say that they were spot on, and our trip from James Street to Birkenhead Park did in fact take seven minutes.  I’m even more pleased because he was then forced to buy chips for doubting me (I can be very harsh).

I’m guessing these haven’t gone down as well as the bosses at Merseyrail would have liked: combined shops and ticket counters at Moorfields, Hamilton Square and Southport.  This is apparently common on Dutch railways, but the trial must have been a failure as NedRail’s idea to roll it out over “15 to 30” stations seems to be a thing of the past.  Maghull and Hooton are, as far as I’m aware, still without the shops.

Still, it’s a good, innovative idea, the shops are clean and presentable, and it’s nice to buy a ticket, a Coronation Chicken sandwich and a Solero from a person without yelling through 20 inches of plexiglass.  It’s a bit of humanity.  I’d like to see a few more.

Bart is the managing director of Merseyrail, and I’m mentioning him here for two reasons.  Firstly, that’s a fabulous name.  It’s so Dutch it’s practically orange, and I’ve been trying to think of a way to crowbar it into the blog for ages.  Secondly, he’s doing a very good job.  I really like Merseyrail: it’s a great network, run by efficient, clean trains that you can pretty much always rely on.  The staff are usually smiley and polite in their blue and yellow uniforms (though there aren’t enough hot young gay men working for them.  A bit of eye candy is always appreciated).  The stations are (mostly) staffed from dawn till dusk, and have heritage features restored with modern adaptations.  Things have certainly improved since Serco/NedRail took over the franchise, and now we can just draw a quiet veil over the whole A***a period.  I whinge about them through this blog, but it’s always said with love, like when you complain about your mother (well, maybe not my mother).  Thank you Bart, thank you Merseyrail, and thank you readers for making the last two years pretty darn great.

Email ThisBlogThis!Share to TwitterShare to FacebookShare to Pinterest
Labels: Bart Schmeink, Merseyrail, odds and sods, something really rather wonderful

Aw, congrats. Seems like only yesterday that I stumbled across this blog after finding some of your photos on Flickr.

That Leicester Square poster is simply excellent. The illustrations make it look like some bizarre throwback to the 1970s.

I once read on the Internet a very long explanation of why the departure boards behave the way they do. I can't find it now, but at the time I thought it was fascinating (which means most normal people would fall asleep reading it).

Not sure what went wrong with MtoGo, but they are still trying: work is about to start at Liverpool Central. Was a bit odd today to see people buying their tickets from the old Stationery Box shop.

Anyway, let's continue and celebrate Merseyrail all the way, because some other cities would kill to have an urban rail system like ours. No, it's not perfect, but it's far better to be positive and cheerful about it than to become one of those bitter people who whinges unreasonably at every opportunity (Joe Riley of the Echo, I'm looking at you).

Many thanks Hampo! I always wondered how you got here in the first place ;)

I didn't realise there was work underway at Central. I've scoured the net but not been able to find what's going on; however, I'm not sure if it's an M to Go or if it's a standard refurb - I have seen a render from Network Rail for just such a rebuild. I might be in town on Tuesday so I'll have a butcher's...

Passed through the station this afternoon. The posters mention that newspapers, magazines, snacks etc will be on sale, so looks like it's an MtoGo.

The owners of the existing kiosk in the booking hall must be a bit miffed at this development.

I found the artist's impression I'd seen before, and there's a massive M to Go logo right in the middle which I somehow missed! Unfortunately I didn't manage to get over there this week so I'll have to have a pop another day. The old kiosks seem to be well on their way out - there doesn't seem to be one in the new Ormskirk station either.

I stumbled across your wonderful blog back in late 2007 when I was in Merseyrail geek mode on Wikipedia - I found a link to your blog via Google. I've followed it closely ever since and am really pleased you've kept it going with such panache. I actually moved away from Liverpool in 2007 for pastures new in London - your blog is one way of reminding myself how great a city it is. So, thank you :)

All the best, keep up the stonking work.

Many thanks DM! Walton wasn't *too* bad - the problem with there being a massive prison right outside the station is it tends to dominate your thoughts. I also did that station verrrry early on, when I was all about collecting the sign and less about taking in the area. Perhaps I should do a revisit!

Hi....where have I been for 2 years?! Just found your blog and am likeing it! I am on Merseyrail daily...and you're right about there not being enough hot gay men on Merseyrail. There is however a hottie that works at Hooton station, gay though? I'm guessing not! I have noticed a new staff uniform seems to be being phased in, maybe to go with the new Merseyrail logo that also seems to be slowly creeping in? You noticed this? Keep up good work :)

I've not noticed any new uniforms and logos - I'll have to keep em peeled. Maybe I'll head to Hooton and stare at the hot guy's there to really "check out the new outfit". Ahem.

Haha, Not seen them wearing it at Hooton, but they seem to have it at the new MtoGo at Liverpool Central. The new logo is the same as the current Merseytravel one, they have started using it at the Merseyrail station at Mossley Hill in Liverpool

I'm heading into the city tomorrow - I'll have a sneaky peek at Central's outfits (and get arrested for stalking, probably).