The advantage of being at a small country station where the only seat is a hard metal bar is that you spend a lot of your time stood in front of notice boards staring at maps.  I was delighted to spot at Claverdon that the West Midlands Railway had issued a new map to delight and infuriate me.

There seem to be two aims with this new map.  The first is to bring it completely into the corporate fold.  Have a look at the West Midlands Network Brand Guidelines (no really, do: it's quite interesting) and you'll see that there are corporate standards for logos, images and fonts.  The map that came out last year roughly followed this but now it has been fully corporatised, if that's a word, with the font changed to LL Circular and logos for parking and bus interchanges springing up everywhere.


It's a pleasingly modern font though I have to confess the logos get a bit much - almost every station has at least one of them.  It doesn't help that they've also added small notices for the QE Hospital at University and - sigh - "Resorts World", making Birmingham International Station positively overstuffed. 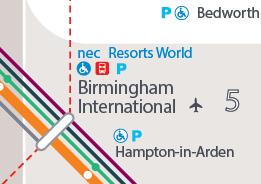 One feature added to the map which I do like is a very clear highlighting of the request stops to the south of the city.  Far better than a quiet x in the timetable.  Incidentally, when I was on the train to Stratford, the guard actually walked down the train touting for request stops - this is absolutely brilliant for someone like me who gets anxiety about asking for them. 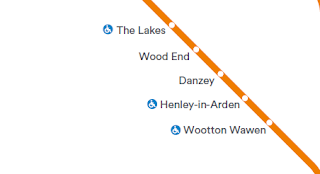 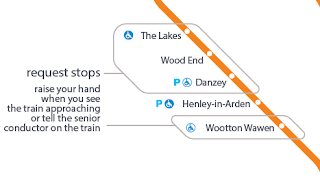 The other reason for the new map seems to be a new emphasis on interconnectivity.  The old map was quite happy to show other rail company's lines, as befits a map issued by a public transport organisation rather than a private corporation: 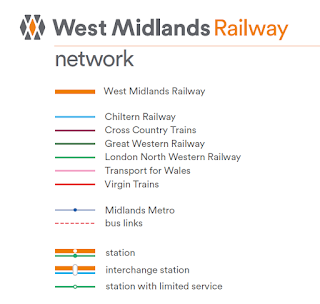 The new map - as well as changing Virgin to Avanti! (yes, it does need that exclamation mark) - adds in even more of them, really underlining where you can connect to other routes. 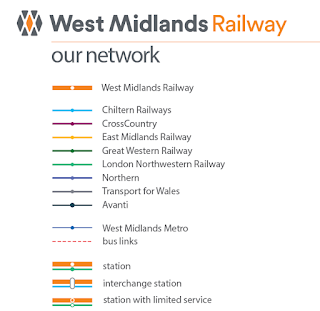 So the top left, which previously went as far as Crewe and then had some vague lines pointing away to the cities of the northwest: 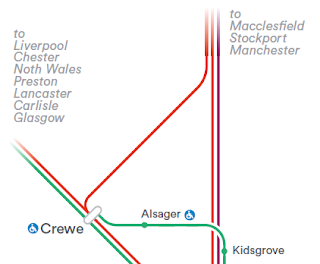 ...now has termini at Piccadilly and Manchester Airport, plus some extra northern towns en route. 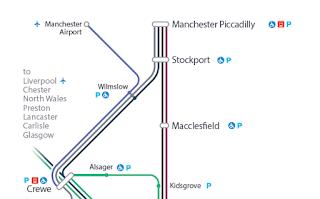 Similarly, Leicester was a simple dot before:

...but now it's got the Midland Main Line marked on there, meaning - hurray! - Luton Airport gets a mention.

Smethwick Galton Bridge has had a proper redesign, with its lozenge replaced by a pleasing massive dot.  The pedant in me wants multiple lines to be marked with the lozenge, the design nerd in me enjoys that perfect circle. 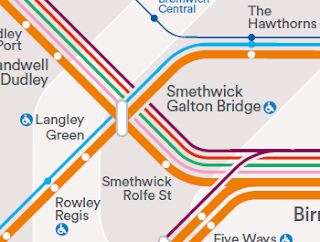 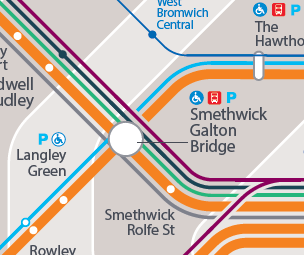 The Metro has been extended to the Library in Birmingham city centre: 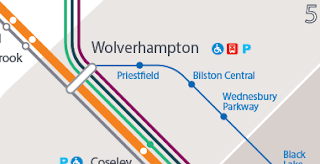 There is an extension to Wolverhampton station under construction, but it won't be opening until the station redevelopment finishes - probably later this year.  Fair enough; they're reducing the need to reprint the map in the autumn.  However, the extension won't take Wolverhampton St Georges out of action - because it's close to the shops, it'll stay as a terminus, with every other tram going there instead of the station.  The new map doesn't show that, which could be annoying if you got on a tram thinking they all went to the station and ended up in the city centre terminus with a mad dash for your train.  On top of that, there's another stop on the extension, Piper's Row.  Will that be added later?

Elsewhere, New Street's become a little bit more complicated.  Back when I was planning my trip to Perry Barr, I looked at the map and decided it would be interesting to complete that loop that's on the map. 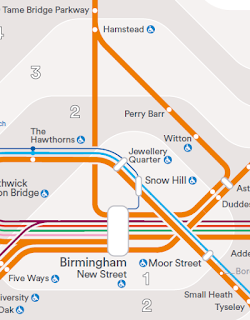 I was surprised to check the timetables and find that loop wasn't a thing - it was the designers being tidy with their terminuses and having them enter the New Street lozenge from either side.  The new map corrects that, breaking the "loop" so that they are clearly different services: 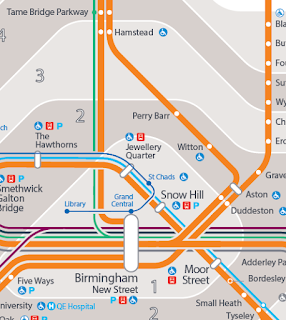 It's not as pretty - and they have to double up the line north of Hamstead - but it is much more accurate.

The biggest alteration comes with Transport for Wales services.  Firstly their line colour changes from a baby pink to a dark grey.  More in line with their corporate branding, yes, but nowhere near as interesting, particularly as the ticket zones are also coloured grey.  But they've also gained another line between Shrewsbury and Crewe: 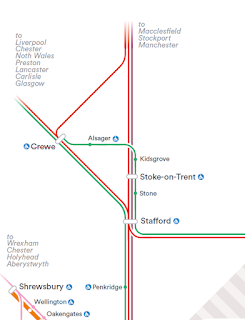 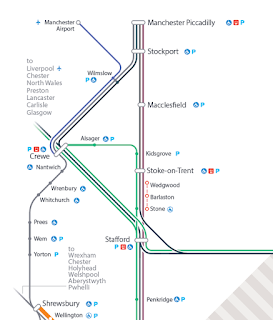 I suppose this is handy if you live in, say, Telford, as now you know you don't have to head into town to come back out again if you want to get to Manchester Airport.  On the other hand, this now means I have to go to Wem.  Wem!  That's not a place, it's the noise a boxer makes when he's smacked in the jaw.  And they've added the Stone-Barleston-Wedgwood bus link back in, even though I was absolutely delighted to see it go in the last update.

They're not the only new stations on the map.  Remember last summer, when I spent a week larking around the bottom left hand corner of the map, collecting all the stations near Hereford and Worcester because they're quite difficult to reach? 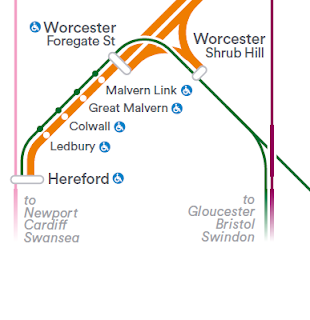 Well, TfWM have decided to add one station - just one - on the lines outside, seemingly for no purpose other than to get me really, really annoyed. 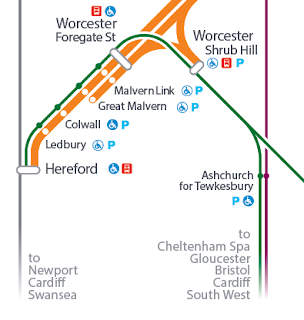 (They've also swapped the green line so it passes over the purple line when it went under it on the last edition).

Similarly, I did a one-off visit to Burton-on-Trent to close that branch: 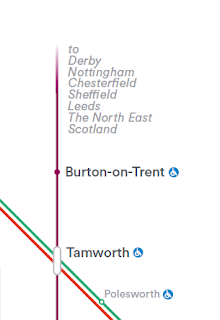 And now they've added a single station beyond it, presumably while laughing at me the whole time. 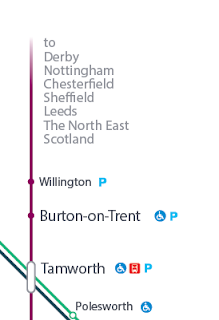 It is still a good map, though I think the lines through New Street could maybe have done with another pass - they're still a bit confusing.  It looks great, and the colours are fantastic.  Now if you'll excuse me, I'm off to update my spreadsheets.

I'm a very amateur groundhopper, ticking off football grounds as and when. Wem is on the list for a future visit, I will have to remember to call it bloody when I do.

Yorton, Wem and Prees: the Dickensian firm of solicitors for all you conveyancing needs.

Good to see Ashchurch included - Tewkesbury really ought to be on a West Midlands rail map. But bizarrely, no sign of Worcestershire Parkway.

You may well get the same bloke welcoming you to Wem that I did a few months ago when I made a delivery there. He definitely made Antony Cotton look butch. Thought he was gonna try and get in the van with me when I was leaving!