There are times when collecting stations is an epic affair, a voyage of discovery through fascinating landscapes and intriguing vistas.  When you excitedly cross off stations with interesting names or histories.  When you discover new places.

Then sometimes, you travel for hours to tick off two obscure country halts just because they're on the far side of the map. 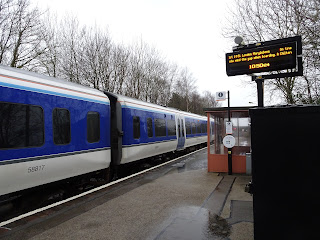 Bearley station (I was disappointed to hear it pronounced Beerly, because Barely would have been a more apt description) is a single platform on the Stratford-upon-Avon to Leamington Spa line.  It gets five trains in each direction from Chiltern Railways, plus a single West Midlands Railway service in the peaks.  There is a shelter and an information board, but no ticket machine or office.  It is... there.

I was, unsurprisingly, the only person to get off the train, dropping down the high step onto the platform.  I think the guard was surprised to see me alight.  I walked down the ramp to the road, past the station cottages which, in the grand tradition of station cottages everywhere, had gone all out on the railway memorabilia.  There was a particularly cute name board with a metal steam train on the top that I wanted to tuck in my backpack. 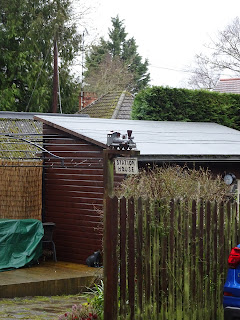 At the roadside was the sign.  Despite being barely touched by WMR services, they're actually responsible for running it, and had weirdly sent out their sign people to make sure it reflected the current corporate look.  There are stations in Birmingham with thousands of passengers a year making do with the colour scheme from two franchises ago but apparently it was really important to update this one. 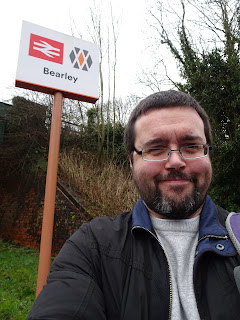 The week before I set out, I went to the Ordnance Survey website to plan a route.  (Incidentally, I can highly recommend it - £23.99 a year for unlimited access to OS maps across the UK).  I came up with a course that took me through a couple of villages, crossing the countryside via footpaths and back roads.  It was interesting and meant I got to see a bit of the area.

Then the rain came.  When I got up, six hours before, it had been raining.  It was still raining now.  Endless, relentless, strong rain, breaking up the soil, turning it into mud.  I'd worn hiking boots and waterproof trousers, but I knew that wouldn't be enough.  This was Wellington boot weather.  Disappointed, I turned away from Bearley village, with its vineyard and church and adjoining RAF base, and instead headed out towards a back country lane, marked by a closed down pub and a care home.  Langley Road was a lot less scenic, but at least I couldn't sink into tarmac. 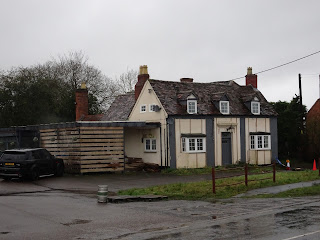 February was at its worst that day.  It should have been dying out, the first tendrils of spring starting to break through, the promise of a new year.  Instead the month had gripped hold of the landscape and made it cold.  The only green was the rough grass, battered after the winter, still afraid to grow.  The only flowers were daffodils with their blooms resolutely closed.  They stayed as tight yellow buds, as though they were afraid of shining against the relentless grey.  Everywhere was brown and black. 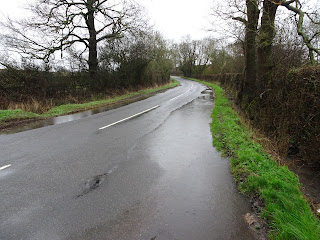 I've said many times how much I hate walking on the road.  It's dangerous and a little scary, particularly here, where the traffic was hefty SUVs and 4x4s burning through at speeds beyond the limit.  Sometimes you just have to though.  The wet weather had left huge puddles in the gutters while the verges were sodden.  I dodged from one side of the road to the other, trying to keep away from blind bends, stepping up onto the grass when I had to.  Where there was a particularly huge expanse of water, I waited until the coast was clear, then ran past; I'd seen the glee those fast drivers had taken in splashing through them and I didn't want to end up soaked.

A little further along there was a foot crossing for the railway, accompanied, as all these access points are, by a sign with the number for the Samaritans.  You'd have to time your suicide attempt well on this stretch of track; miss your opportunity and you're lying on the rails for an hour, getting a chill from the cold metal under your neck. 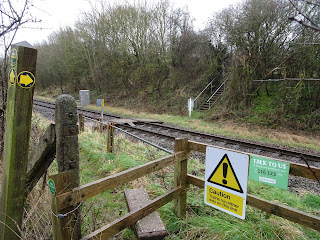 I filled my mind with busy thoughts, watching for cars, wandering.  Getting back in the swing of things.  I always enjoy the walks between stations, even if it is relentlessly grey.  It's the activity, the breaking out of the routine.  It's the walk with a purpose.  There wasn't much here that I couldn't have seen anywhere in England but it was still new lands to conquer. 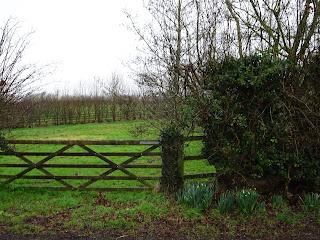 I passed a small business park, with a curiosity in the grass outside; a single champagne cork.  Clearly this was a cut above the country employment parks I was used to seeing, a couple of craft-type businesses and maybe an accountant.  But then again, this was Warwickshire, not Lancashire, and so there was a thicker stockbroker belt here.  As I trudged on there was the honk of a horn and the Stratford-Birmingham train appeared in the distance, seemingly floating on the hedgerows as it slid by at speed. 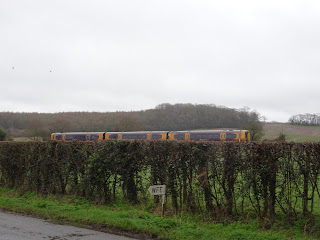 The rain had stopped by now, though I was still speckled with drips from the trees, and the puddles stayed as large as ever.  A ditch by the side of the road burbled with overflow.  You'd hear the noise of running water, and expect a cheery country stream, only to be confronted by a heavy rivulet of muck.  Thick brown water gurgled past, churning, bringing up a stench of decay. 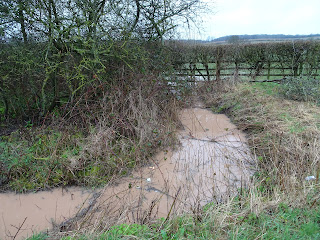 As I passed a gate, two sheep spotted me, and wandered over in the hope that I was a wandering shepherd going around providing extra meals to livestock.  I thought about giving them a stroke through the bars but the lack of food would've only disappointed them so I trekked onwards. 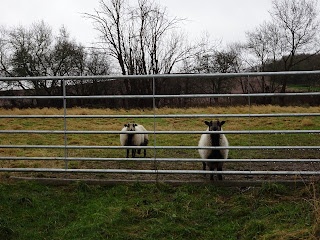 Up ahead there was a sign: Mud on road.  "I mean, obviously", I thought, because there had been mud all over the place throughout my walk.  I didn't understand why this spot was special.  (Also, that sign makes me think of this Viz cartoon every single time).  I turned the corner and saw why. 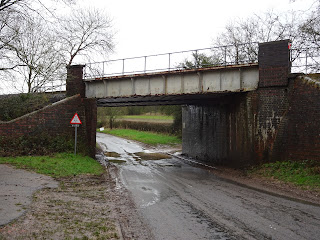 The road dropped down beneath the railway and in the dip the run off water had gathered in a deep pond.  Thick streams of mud were smeared across the tarmac and, as I watched, a Range Rover barrelled through and splashed water against the bridge walls.  I paused, listening for traffic, then when I thought it was quiet, I ran through and out the other side, straight down the middle.  I kept going to try and dodge the worst of the muck before finally dropping back onto the verge.

A sign for Langley village told me I was halfway to the next station.  It was accompanied by a warning that number plate recognition was in use.  Elsewhere, a farm shouted that there were dogs on the loose - a sign that I think was meant to scare you, but as this sign was right next to it, I don't think the burglars will be quaking in fear. 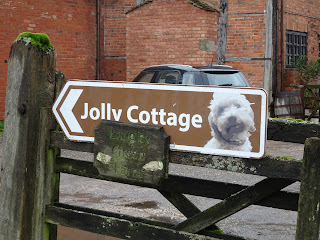 I realised that I'd not really been taking in the landscape, instead focusing on the road ahead.  To be fair, it wasn't especially inspiring - a few hills and grasslands beneath dull skies.  It was midday but you couldn't tell.  As I paused a black Porsche roared past, engine growling, the canvas roof shut tight. 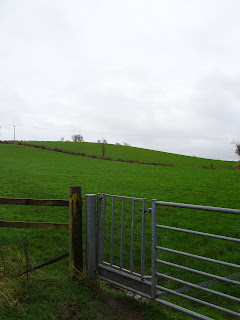 As I approached a crossroads a swarm of birds ducked and dived through the skies.  They seemed weirdly obsessed with this one spot, flocking to it, vanishing then reappearing.  I thought of the magic of crossroads, the folklore around them; centuries of lore and mystery tied up in them.  Was this a mystical spot?  Were the birds perhaps drawn by voodoo or spirits? 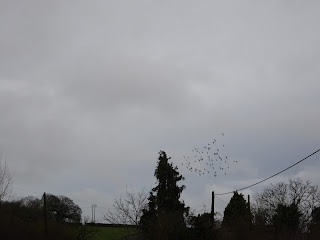 It turned out there was an animal sanctuary there, and the flock of birds were probably stealing food off the livestock there.  Still, for a moment I felt all Iain Sinclair, only not really annoying, so it wasn't all bad.  I turned left. 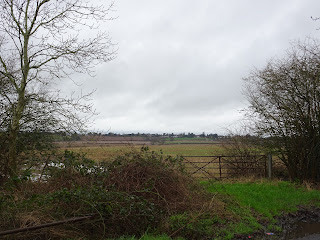 Saddlebow Lane was delightfully named, but it was even darker and narrower than the road I'd just turned off.  There were at least strips of grass there; here the trees hugged the road tightly, bending over my head, while the runoff from the fields poured down the gutters in brown rivers.  The hefty drains were overwhelmed.  I was walking downhill, so I knew there would be a bottom at some point, and soon I encountered it.  The road was covered with debris where the floodwaters had overwhelmed it.  I was glad they had receded. 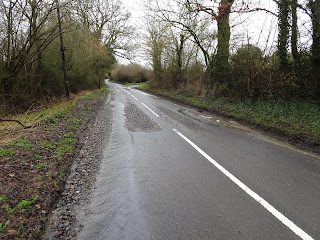 Back up again, silently begging each vehicle that passed not to go hard through the water and soak me, then I reached the top and the sign that every station collector treasures: 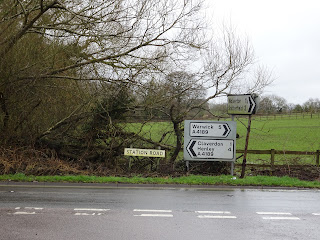 As with Bearley, Claverdon station was some distance from the village itself.  If I'd followed my original, OS-lead route, I'd have come out in the village itself, a manor first recorded in the Domesday Book, but as it was I encountered the station first.  I walked down to the single platform - the other one having been mothballed when the second track was removed in the Sixties - and discovered that I was way, way ahead of schedule.  There was an hour and a half until the next train. 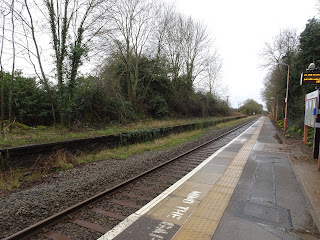 Normally in these circumstances I'd find a nice pub, but the nearest one was a half a mile away up a steep hill.  I had a flask of water and a sandwich, so I settled into the bare shelter and waited.  Two stations collected at the bottom of the West Midlands Railway map.  Now it was time to begin the hundred mile, three train journey home. 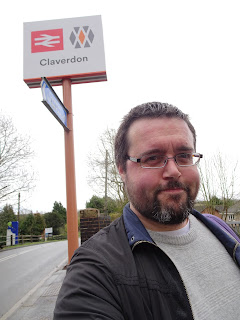 This is a very odd hobby.
Posted by Scott Willison at 10:59

A damned shame that the rain forced you to change your cross-country plans. There are few upsides to muddy waterproof-trouser weather.

It could be worse, you could be into samurai sword collecting, handcuff collecting or rock balancing! https://www.coburgbanks.co.uk/blog/friday-funnies/50-strange-hobbies/