Beer is awful.  At least, it is at first.  Beer is this orange mess you have to force yourself to like because everyone else is drinking it.  That first pint you get as a teenager, that wondrous moment when you get to drink what everyone else drinks... and then you taste it and it's bitter and flat and gross. 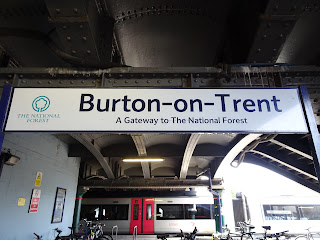 Anyway, I was visiting that place and, despite what the sign up there says, it's a name synonymous with beer rather than the National Forest.  Burton is the home of beer.  They've been brewing here for centuries and it's still the main industry in town.  Walk from the station to the town centre and you pass by the huge main brewery, straddling Station Street and dominating every view. 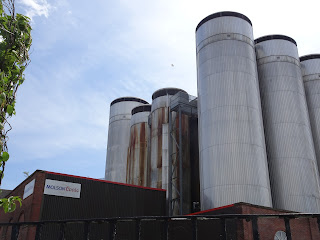 This was, originally, the Bass brewery, a famous name in British beer.  However, after mergers and buyouts and sales, it's now the MolsonCoors brewery, which is of course rubbish.  Even the logo is terrible. 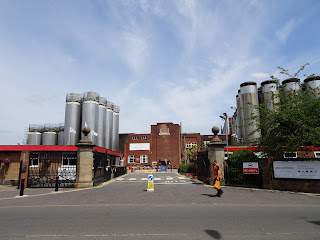 It was lunchtime on a baking hot Thursday and the streets were filled with brewery workers nipping to the Sainsbury's for their lunch.  I crossed over at a busy junction and ended up in a pedestrian zone where enthusiastic men in shirt and tie were trying to flog electricity to disinterested passers by. 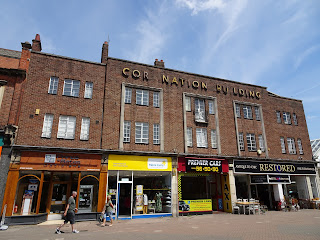 From there it was a brief little wander down to a market square, with a church and cafe tables and an assortment of stalls.  It was pretty, a nice little centre to a small town. 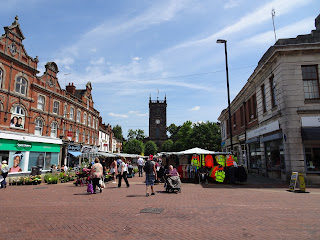 Can you tell I'm struggling to say anything about Burton(-)(up)on(-)Trent?  Because while it was perfectly pleasant, there really wasn't anything to catch me.  The town centre was a mix of old and new buildings.  There were plenty of shops.  There was a college, still marked as the Technical College on a fingerpost, with demob happy teens lazing around outside. 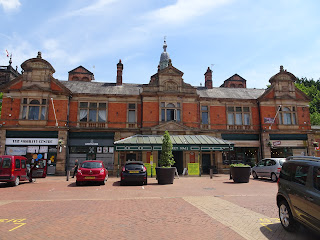 There was absolutely nothing wrong with Burton, but there was absolutely nothing special about it either.  I ducked behind the church and wandered around some riverside meadows, where there were ducks and a Victorian footbridge, and people sat on benches taking in the sun.  A pair of teens were trying to get an Instagram worthy shot, with one girl stood in the reeds and the other on the footpath.  I hesitated so she could snap her photo but she waved me on.  "We'll be ages," she admitted. 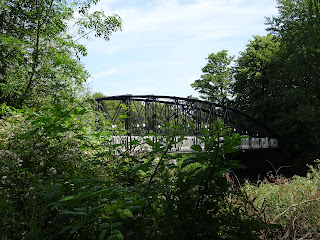 Before long I'd done a circuit so I walked back into town.  Most of the shops are tucked away in a pair of malls so I headed into them, if only to get a bit of aircon.  In the centre of Cooper's Square was a monument to brewing because, as I say, they're really keen on the beer. 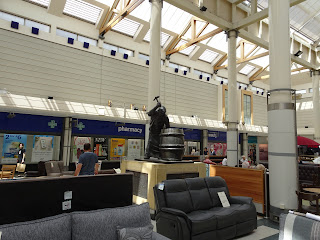 The sofas aren't part of the monument.  There seemed to be some kind of furniture sale, with a bored looking man slumped in one of the armchairs playing with his phone.  There was another monument to brewing outside the shopping centre as well, though this one was a bit more avant garde. 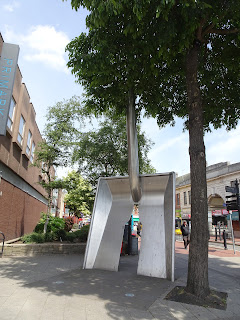 There were no monuments to Marmite, Burton's other contribution to the national cuisine, which was a shame.  Marmite came about when someone realised they could turn all the leftover brewer's yeast into a food, giving hope to all manufacturers that they can turn their waste products into a handy sideline.  One day we'll all be spreading bits of plastic regurgitated from the Dyson factory on our toast, you watch.  I had a bit of a wander round the Waterstones, as is the law whenever I spot a bookshop, then took a turn and realised I was back on the market square again.  So that was that. 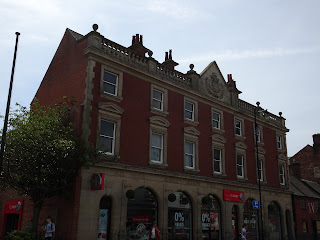 It was no good.  I'd resisted it long enough.  I was going to have to go to the pub.  But which one?  The day before I'd put out a request on Twitter for recommendations, and I'd got half a dozen back.  Unfortunately, Burton's commitment to beer hadn't yet translated into all-day drinking.  Looking at the websites I found that most of the decent pubs closed at 2:30 and then reopened in the evening, which severely limited my choice.  Either that or I would have to go for one of the lesser pubs or, heaven forbid, a Wetherspoons. 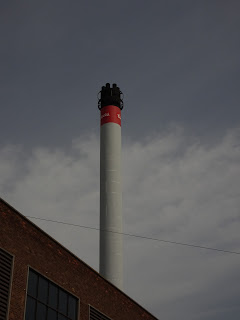 What I really wanted to do was drink some Burton beer but, to be frank, I don't particularly like Bass beers.  Carling?  Are you mad?  Carling is the drink of thugs and idiots.  Perhaps a Doom Bar, if I could find one, but that MolsonCoors had put me off the whole idea to be honest.  I didn't particularly want to give my money to a North American brewery because it will only encourage them to make more, and Americans and Canadians cannot make beer.  It is the most tasteless piss of all tasteless piss.  It makes Carling taste sophisticated and complex. 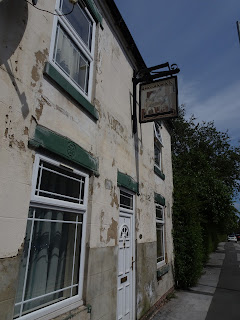 I walked round the back streets, past a couple of pubs converted into houses that still hung their signs outside; that's somehow sadder than them not being pubs at all, a remnant of the good old days slapped onto modern practicality.  I had decided to head for the Coopers Tavern based on three facts.  First, it was the only one of the recommended pubs that seemed to be open all day.  Second, it was originally the tap house for the Bass brewery, so while I wasn't actually going to drink local beer, I was in a pub that was of genuine importance to the local brewing industry.  Third, the Our Story section of the Joule's Brewery website is so delightfully bitter and pissy I had to encourage that level of pettiness. 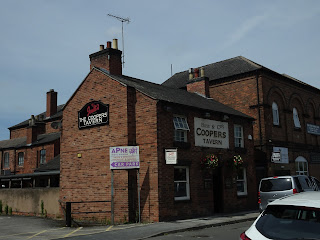 Inside, the pub was dark and low-ceilinged, a series of small rooms with the barrels at the back.  There wasn't a bar, more a space to be served, with a friendly looking barman and the beers chalked up on the wall.  I picked the IPA and tried to ignore the cluster of pub bores who were loudly discussing how good it would be if they brought back National Service though naturally, "my lad wouldn't be able to handle it.  Too soft."  Would it surprise you to learn that not one of these moaners was old enough to have done National Service themselves?  Of course it won't. 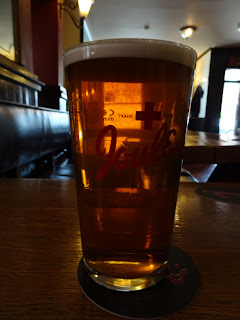 I went back to the front with my pint so I wouldn't have to listen to them any more and took a sip.  It was... okay?  A bit too dark for me.  There was a strong aftertaste that didn't really agree with me.  Beer tastes change and evolve as you get older.  When you're young you stick with the blandest lager you can find because then you're getting the alcohol without the taste.  As you grow, you get bored of that, so somewhere around your early thirties you move onto bitter, because that's got a bit of a flavour to it - start with the simple ones, like Boddingtons.  Then you begin delving into the craft section until, when you're in your forties like me, you realise you have a whole ladder of preferred brands in your head, a Choose Your Own Adventure of IF they don't have this beer THEN go to this beer UNLESS they have this one.  The next step, beyond that one, is joining CAMRA and doing that thing where you get a little shot glass of beer before you'll bring yourself to commit to a full pint. 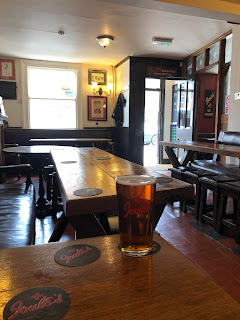 I think the Joule's IPA was built for that stage of life.  It was a bit too complex for me.  It was for people who have used the phrase "barkeep".  It took me a fair while to finish it but, because I am brave and strong, and also cheap, I was determined to polish off the whole pint. 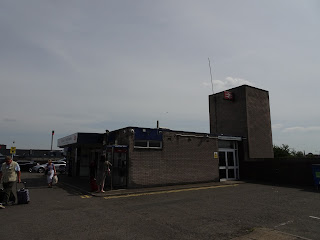 I headed back to the station.  It won't win any prizes.  It's a 1960s construction, mounted on a bridge over the tracks and surrounded by parking and taxi ranks.  Like the rest of the town, it's ok.  Just ok.  Maybe the key to really appreciating Burton is to be drunk.  It would explain a lot. 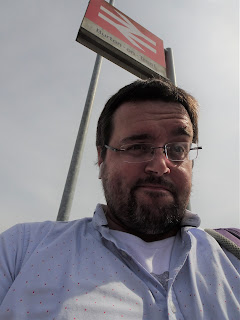