A couple of weeks ago I did something odd.  I went out on the trains.

I bought a ticket, went on a regularly scheduled train, took a trip to somewhere without it being important or necessary or vital.  Remember those days?  Good times.

I went to Nuneaton.  Is Nuneaton funny?  I sort of feel like it is.  I feel like it's one of those places comedians reach for because of the way it sounds, like Kidderminster or Slough.  It's a conglomeration of consonants that clicks, bounces off your tongue.  Maybe it's the "nun" part.  Nuns are always funny.  To me, anyway. 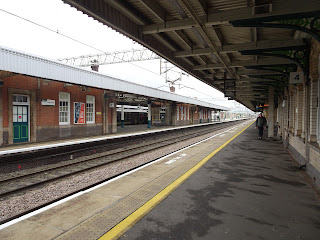 I'd no idea what to expect from Nuneaton station so it came as something of a surprise.  It was huge.  The Trent Valley Line was built in the 19th century as a diversionary line, so that trains from London to Liverpool and Manchester wouldn't have to pass through Birmingham, and it means that a relatively small town like Nuneaton ended up with a station spread across half a dozen island platforms with electrified rails. 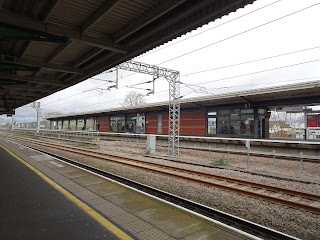 It's a station that's still expanding, too, with Network Rail constructing a new platform 6 & 7 on the far lines in the early 2000s.  They built it in their standard, modular style, which I've not seen outside of a ticket office before.  It's a bland, competent style, that won't offend anyone in twenty years time, but won't have station architecture geeks like me cooing over it either. 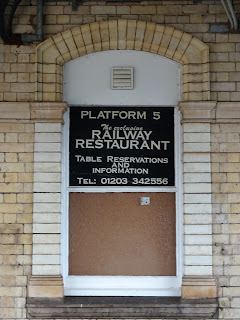 Sadly the Railway Restaurant - and its attendant Model Railway Shop - was long closed, the windows boarded up, and the only catering facilities left now was a Pumpkin cafe.  I went up and over the tracks, arriving on platform one just as the train from Coventry came in and disgorged its passengers, then went outside to the car park in search of a station sign. 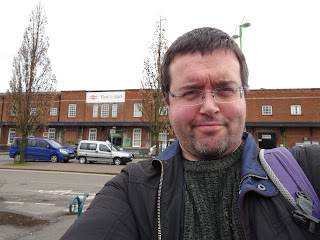 It's a broad, solid, building; not necessarily attractive, but enough of a statement to be proud of.  I wish it had a better approach than an acre of grey tarmac and the loading bay of an Asda.  There's space for a proper station square.  There is a clock tower though, so that's nice. 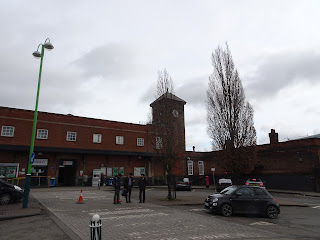 I descended down the hill and across the ring road into the back end of Nuneaton bus exchange, dodging single deckers to reach the pedestrianised precinct.  People were wandering around town, shopping, getting coffees. 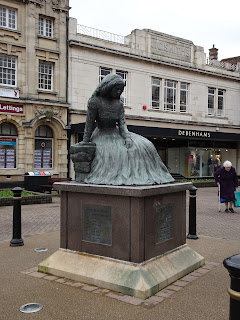 That is a statue of Nuneaton's most famous daughter, Mary Ann Evans, better known as George Eliot, in a square named after her.  Nuneaton is incredibly proud of George Eliot, and rightly so, what with her being one of the greatest novelists in the English Language.  Play to your strengths and all that.  Especially if the competition is Mary Whitehouse, Ken Loach or Nigel from EastEnders (hang on, scratch that: Larry Grayson is also from Nuneaton.  Where's his statue, eh?). 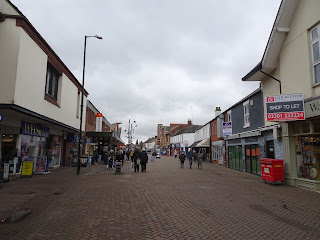 As I wandered round the town centre, I got a feeling of sadness.  Nuneaton's shopping district was on a downward slide.  There were vacant shops everywhere.  To Let and For Sale signs hung from every other building.  Streaks of bustling retail were broken by shuttered vacancies, broken teeth in a smile. 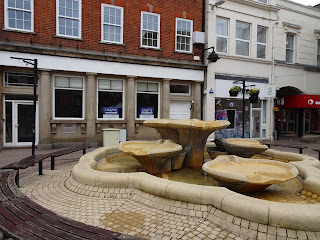 At some point in the Eighties, Britain took Napoleon's "nation of shopkeepers" slur as a badge of pride and pivoted to retail everywhere.  Shops were the answer to everything.  Never mind making stuff, never mind constructing or designing, just ship it in from somewhere else and sell it.  Our town centres were pedestrianised and expanded.  Which was fine, until the internet and austerity came along and changed the way we shopped.  Why go into town to pay for a shop's rents and rates and electricity bills when that CD could be posted through your door for half the price? 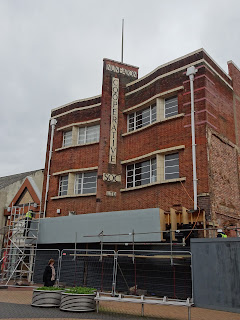 Now you get towns like Nuneaton.  Not important enough to be a regional centre and attract the big boys.  Not small enough to have the charm of local shops and market retailers.  A town that sold itself to the shopkeeper and is now seeing them all vanish. 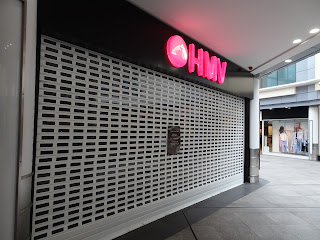 I went into the Ropewalk Shopping Centre, past the shuttered HMV and the closed Monsoon, and used the toilets.  After scrubbing my hands for way too long - this was still early enough in the pandemic to feel awkward about it, and to worry an attendant might think you were loitering - I re-emerged into the quiet mall.  I think town councils are going to have to make serious decisions as more and more traditional retailers disappear, and places like the Ropewalk are where they should be directing their glance.  These glossy indoor malls are dated.  They're yesterday's shopping experience.  Yes, they cover you from the rain, but they're also generic and bland; they close at 6pm and seal off an entire section of the town.  As the retail market shrinks, knock them down and replace them with apartment blocks.  Put people in the city centre instead of security grilles and uniformed guards.  Make town centres places where people can walk and enjoy themselves all day and night and maybe they'll come back to life. 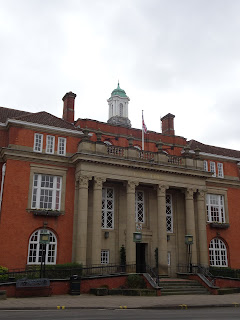 I stepped back out into the real world by Nuneaton's admirable town hall, then encountered another sliver of the Ring Road.  I realise this makes me a total nerd but I find it really difficult to cross at a pedestrian crossing when there's no green man.  Yes, I know, there's no traffic coming, but if I've pushed the button, I have to wait for that signal to cross.  I just do.  It gets embarrassing when, as happened here, I stood on the island waiting while a tiny Asian woman who looked like she was older than the Earth itself gaily marched across the carriageway and left me behind. 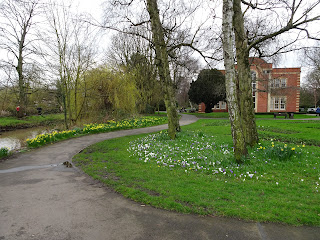 I finally got the signal to cross and ended up in Riversley Park.  Now this was a proper municipal park.  Flowerbeds and lawns stretched alongside a churning river.  There was a museum and art gallery with a tea room.  Gardeners were planting spring bulbs beside the war memorial. 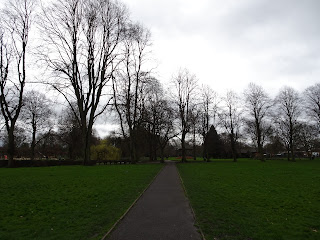 There were people too, walkers in waterproofs, elderly couples arm in arm, mums with prams.  Folks with dogs stopping to chat, one side's French Bulldog suspiciously sniffing the other side's Golden Retriever.  Children playing in the kind of playground I'd have killed to play on when I was young with a rocket ship tower and swings and climbing frames.  Even on a chilly, overcast day, you could feel the hope of a new season, the whiff of optimism.  Nature starting to return. 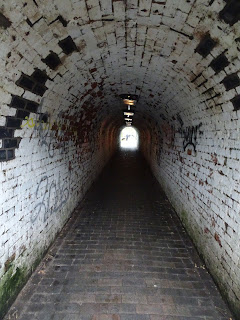 I took a narrow tunnel under the railway line into the second half of the park, where a giant leisure centre dominated.  The outdoor pitches were screened from public view but I could hear the excited chatter of girls playing - netball?  Hockey?  Lacrosse?  Out the other side, onto the main road, following a sign for the George Eliot Hospital - told you they were proud - and passing two bin lorries swapping crews with much laughing and noisy banter.  I ended up at a huge roundabout with a railway viaduct soaring over the top.  As I watched, a purple and orange West Midlands Railway train glided over the top, and I realised I'd probably have a heck of a wait at the next station. 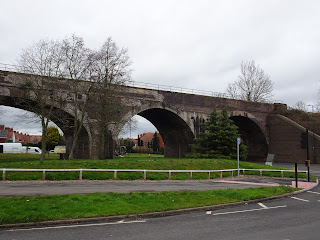 Never mind.  I turned onto the Coventry Road, the old route to the city before they built the much larger A444 dual carriageway.  It climbed a hill, past a church with a neat little development of sheltered housing surrounding it, past George Eliot Street - alright, you're starting to lay it on a bit thick now - and over a canal.  There's always a strange disconnect when you climb a hill and find a canal, passing over water when you instinctively feel it should be below you in the valley. 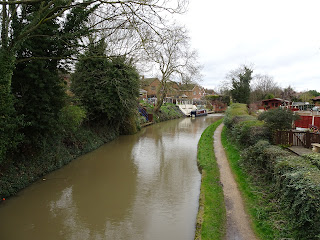 In Hill Top, I spotted a tiny sign pointing to Bermuda Park, the industrial estate that gave my next station its name, so I swerved off the main road and into a small estate of corporation houses.  I walked down Middlemarch Road, past Marner Road, and decided it would be a while until I read another George Eliot novel. 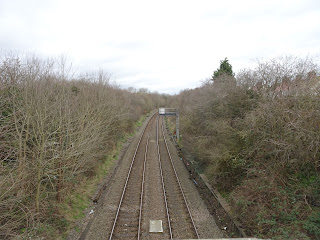 Across the railway tracks and into a miserable little playground, then I was following a path behind a high embankment.  It was lonely and isolated until I stepped out onto the main road at the back of the industrial estate.  Trucks moved in and out of anonymous cubes decorated with names that made no sense - mash ups of words, random initials, no clue as to what any of these firms actually did.  Steel fences with spiked tops guarded against the curious. 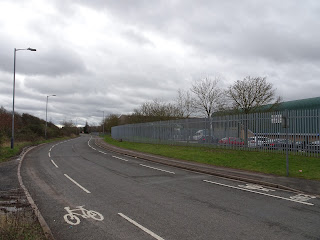 If you ignored the beep of reversing lorries it was all pretty quiet.  In the distance, I spotted a field of orange masts, and as I got closer it formed into Bermuda Park station, a name that is way too glamorous for the reality. 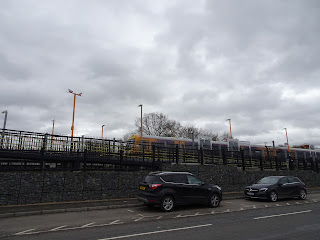 The station only opened in 2016 to serve the factories at the south of Nuneaton.  Surprisingly, it was built without a car park, though commuters to Coventry were already using the layby outside.  Surely all new stations on the edge of towns are built as park and rides these days?  Even more surprisingly, there didn't seem to be a convenient footpath to the housing estate the other side of the line.  I wonder if this is because the council have quietly marked the expanse of scrub and grass between the railway and the Coventry Road as a potential new development site, and they want Barratt Homes to pay for it. 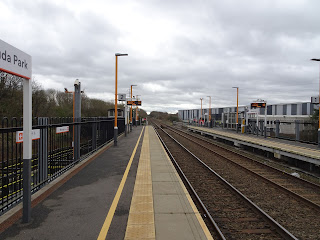 It's an unexciting station, two platforms with steps and a ramp.  There's no ticket office - just a machine by the entrance.  I had a while until my train so I found a seat and ate my lunch, staring at the cash and carry over the way.  If I'd planned better, I could've gone fifteen minutes to the end of the road and eaten at the Beefeater that occupies the house where George Eliot grew up, but to be honest, I'd kind of had my fill of her by that point.  A chicken caesar wrap from the Co-op would do me fine, thanks very much. 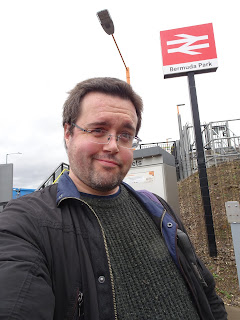