Guess Who's Back. Back Again. Shady's Back. Tell A Friend.

Of course, when I use the phrase "shady", I'm not really talking about my drug-fuelled violent rapper alter-ego.  I'm more talking about this sort of thing.

Anyway: hello.  It's me again.  That bloke who went round Merseyrail.  Then Northern Rail.  Then the Metrolink.  I'm back again.

I cast my eye about the railway networks of Britain, looking for somewhere to go, somewhere to map.  Metrolink was alright but it was all way too much wandering around similar looking backstreets in Manchester; the stops were too close together for me to really feel any variety, and they were so frequent there wasn't much of a challenge.  I need something a bit more difficult this time.

Not too difficult though.  Scotrail, for example, would be very interesting, if it didn't take three hours just to reach the border.  Heading for somewhere in the far north would take the best part of a day and would need an overnight stay.  I'm not made of money, sadly.  That's without mentioning the stations on the side of a mountain, served by the sleeper train once a day, where I'd dismount the train and have to hang around on a rail blasted platform for twelve hours before heading back the way I came.

Wales, meanwhile, has been sort of done.  I've been all over the north and middle, so we're just talking the south of the country really, and again, that's a long way away.  What I really needed was a midpoint.  Somewhere that's not too far away, but it sufficiently challenge.  A midland, if you will. 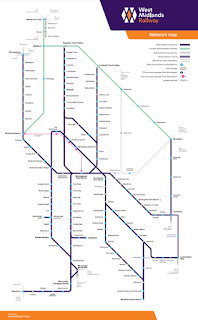 West Midlands Trains took over the franchise covering Birmingham and its environs at the end of 2017.  It's actually divided into two separate companies.  The London Northwestern Railway covers the long distance services; the trains from Liverpool to New Street are LNWR, as are the stopping services to London.  I won't be concerning myself with that one, so there'll be no need to visit the likes of Tring.

Instead I'll be covering the commuter services, known as the West Midlands Railway. and collecting the stations on the map you see above. (A map that needs updating - Kenilworth is shown as "opening 2018".  Sigh.  You can see the PDF here).  That's Shrewsbury to Hereford, Stratford to Lichfield, plus the likes of Worcester and Leamington Spa.  Plus lots of small commuter stations within Birmingham itself, places with intriguing names like Jewellery Quarter and Acocks Green and Rowley Regis.

I've touched on this area before, of course.  I visited Moor Street, Snow Hill and New Street with Robert and Ian back in 2013, but since then New Street's been comprehensively rebuilt and I've not really seen it so I'm declaring them "uncollected".  Same for Wolverhampton and Shrewsbury, which I've barely touched.  I am going to count this part as collected already, though: 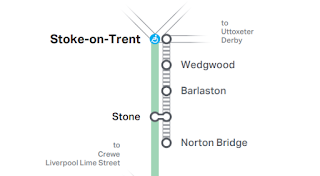 Again, I went here with Robert and Ian (in 2012 this time) but these stations don't receive a railway service and are basically waiting to be closed (in fact, there's nothing left of Norton Bridge).  I'm not keen on riding the bus again, so that'll stay.

That still leaves me with 130 stations to cross off the list.  Plus the trams, maybe.  If I feel like it.  Shall we see what happens?
Posted by Scott Willison at 13:00

How can you not do the tramz? They are so much better than they used to be.

Are you going to be doing the request stops too?

Woohoo! A new Merseytart Quest. Suddenly 2019 is looking up again.

You probably already know about this, but Rails Around Birmingham covers every one of the operational and abandoned stations in the wider West Midlands.

Are we looking at another blog name change too?

Rincew1nd - Trams are only possible because they're not on the map. Maybe if I have a day to myself. And request stops are obviously necessary.

Anon - I have Rails around Birmingham bookmarked, thank you!

Plymothian - I can't decide on the name change. I'm mulling it.

Actually, either Barlaston or Wedgwood, probably the former, is going to reopen during the WMT franchise at some as yet to be determined point. The other one (and Norton Bridge) will be properly closed.

I reckon when it reopens you need to do it again - by train!