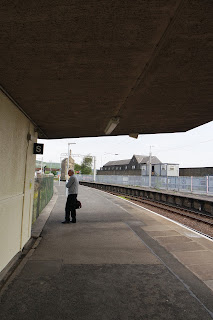 In a normal universe, Carnforth would be just another station.  It's got a junction, where the Barrow line splits off from the West Coast Main Line, but the fast trains don't stop there.  It's got some Victorian buildings, but so have hundreds of other far more obscure stations.  It's not in a big town.  It's not interesting. 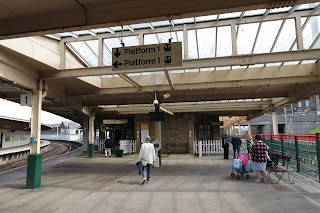 Carnforth has a really major claim to fame, though.  This is where they filmed 1945 weepie, Brief Encounter, and so it holds a special place in the hearts of generations of movie goers. 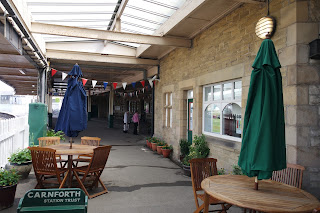 I watched Brief Encounter before I visited, because I am a professional like that, and I have to say, I didn't enjoy it.  I am not an advocate for adultery, by any means, but after about three quarters of an hour I was just shouting "will you just FUCK him please?" every time Celia Johnson appeared onscreen looking pained.  I like a good tortured romance - I cannot recommend The Remains of the Day, in which Emma Thompson and Anthony Hopkins spend two hours being in love but don't do anything about it, highly enough - but the meat puppets in Brief Encounter were just annoying.  Stop talking about your love and do something about it beyond a snatched snog on a humpback bridge.

There were some parts of it I liked.  The saucy tea shop madam with her affected accent.  The dramatic Dutch angles when Celia Johnson was considering chucking herself under the express.  A brief cameo from Irene Handl riding an enormous organ.  Celia disapproving of ladies who smoke in public even as she lights up herself.  Valentine Dyall looking ridiculously sly when he realises his flat is being used for illicit purposes.  The rest of it was histrionic nonsense.  What was so great about Trevor Howard anyway?  Banging on about tropical diseases and falling in lakes.  He was just as dull as Celia's husband, and if she had run off with him she'd have been just as unhappy, only in Africa.  The more I watched it, the more I became convinced that Noel Coward was taking the mickey; that he wrote these buttoned up stiffs as a joke, and then was horrified when people took their middle class angst seriously. 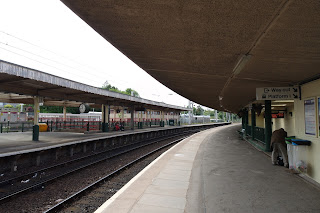 I had no intention of falling for a doctor on the platform, not least because I was the youngest person in the station by quite some distance.  Carnforth has got its act together when it comes to cashing in on the Brief Encounter heritage mob, and is now a regular stop for coach trips round the Lakes (obviously they don't arrive by train).  This is a pleasant change from when Victoria Wood visited the station in 1996 for Great Railway Journeys.  The station then was boarded up and abandoned; the clock that the star-cross'd lovers had met under no longer worked.  This was what she saw, less than 20 years ago: 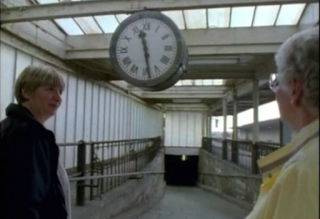 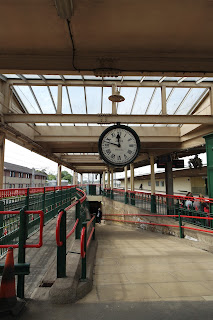 I'm not keen on the green and red, but you have to admit that's an improvement.  Victoria and that little old lady bemoaned the fact that British Rail hadn't seen fit to take advantage of its status as the home of an internationally beloved icon; apparently they show Brief Encounter once a week in Japan.  I don't believe that, personally, because from what I understand, Japanese television is just anime, game shows where members of the public are tortured, and incomprehensible ads starring famous Americans, but I'll take their word for it. 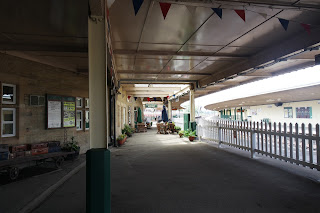 I wandered into the Refreshment Room for some lunch.  In the film, this is where Trev and Celia both meet and say farewell; it's also the home of some rowdy sailors, tedious gossips and the line "now look at me banburies all over the floor!", which I'm sure is a euphemism for something. 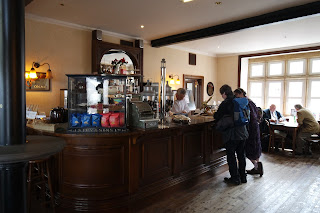 In reality, the refreshment room was a set at Denham Studios, but the Carnforth Station Trust has done its best to recreate it.  The giant gunmetal tea urn is unused, replaced by a touch screen operated coffee dispenser, and the heavy till is passed over in favour of a computerised system, but otherwise you could imagine there was a steam train outside quite easily.  I queued behind some coachgoers to politely wait to order; as is the way of the old, they barged in ahead of me and ignored the queuing system, possibly because they thought they were about to die and so needed to get their scone in quick.  Instead of a blousy woman behind the counter, there were two men, one middle aged and a student on his summer holidays. 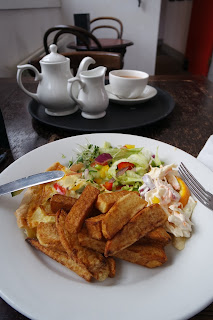 Soon I was sat in the other room, eating quiche and chips.  I can't imagine Celia Johnson eating quiche.  I should imagine even the salad would be a bit avant garde for her.  In real life, Celia Johnson was Ian Fleming's sister in law, and I struggle to imagine what they talked about over Christmas dinner - he the louche playboy, she the prim English rose.  I'm guessing she wasn't the inspiration for Honeychile Rider. The coach party cleared out after a while - I gathered from their conversation that there was twenty minutes until the bus left, but they wanted to be sure - so I was able to wander the rest of the station unmolested.  It's a mixture of railway paraphernalia, Carnforth history, and general "nostalgia".  One of the old biddies sniffed to her friend "I suppose it's alright if you like old timey stuff", and I thought, if the pensioners aren't amused, you need to be careful.  You'll be back to being boarded up and your refreshment room will be a Pumpkin. 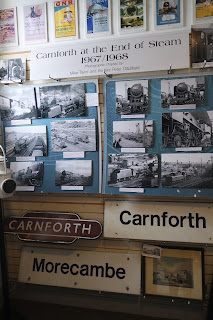 Obviously there's a gift shop, and obviously it's Brief Encounter heavy.  I'd got the Blu-Ray for £5.99 - it costs £3.49 to rent it on iTunes, so I figured I'd pay the extra - so I was surprised to see the DVD going for £12.99 in the shop.  The Blu-Ray, incidentally, was nowhere to be seen.  There was no need to buy it anyway, because there's a screening room that shows the film on a constant loop. 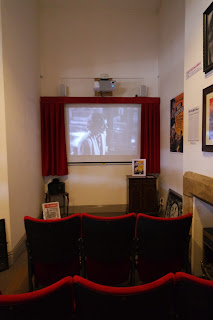 Imagine working with that.  The poor woman in the gift shop must hate the film with a passion.  Either that or it's seeped into her very being, and she talks like the Queen Mother and pins her hat on top of her head and makes her husband sleep in a separate bed even while complaining that he's dull and unsexy (seriously Celia, push those beds together and you might not be wet for the first doctor to jam his thumb in your eyeball). I headed down through the underpass to get to the outside of the station.  In the film, this is where Laura and Alec first kiss, the saucy devils; I didn't get a single offer of illicit tongue action while I was down there, even though I loitered hopefully for quite some time. 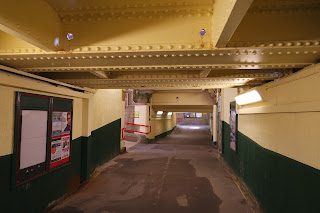 It didn't seem right in colour, anyway.  None of it did.  I suppose it's hard to get excited over a film location when you don't particularly like the film.  It's just a curiosity then.  It's not like when I visited Key West and I got to stand outside the actual Barrelhead Bar from Licence to Kill; I was grinning for hours after that one. 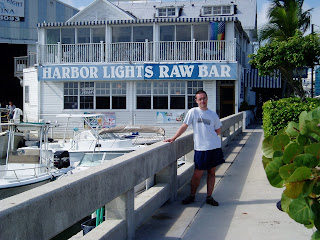 Instead, Brief Encounter made Carnforth disappointing.  If it had been just another station past its prime, like Selby or Church Fenton, I would probably have found it charming.  Its status as a tourist mecca instead made me dislike it.  All that nostalgia for something that wasn't that good in the first place. 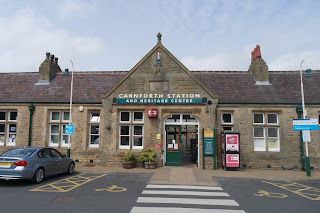 Sorry, Celia.  I know it's awfully rotten of me, but I just can't bear it.  I shall go and chuck myself under the 14:12 as penance. 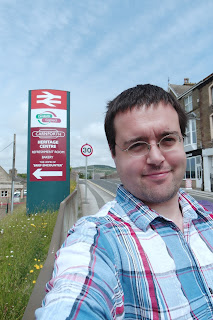 Goodness you weren't very heppy with your visit weyre you?

I'll be having nightmares about that auton with the fireman's shovel