On a hot day in June, there aren't many places you can escape the sun in London.  Air conditioning still hasn't really caught on in this country.  The parks are packed.  The Tube is a stuffy nightmare.  I had to go somewhere.  I escaped underground. 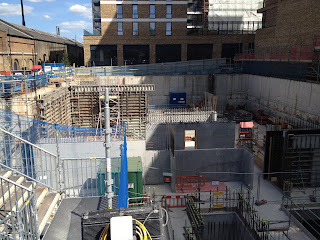 Crossrail finally completed its tunnel works, and to celebrate, they invited locals in to have a look round.  They also mentioned it on their Twitter feed, and as usual, the free tickets were gone in seconds.  But I was very, very lucky.  I happened to be on Twitter right at that moment, and I managed to claim one ticket.  One hastily booked train journey - and one lunch at the Barbican with Ian - later, I was walking through a metal detector to get into what will one day be Woolwich Crossrail station. 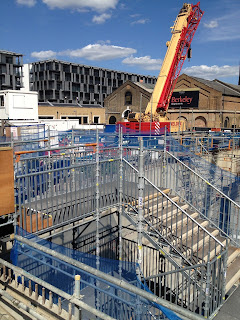 Woolwich was scrubbed off the list of new stations at the "value for money" stage.  However, Berkeley Homes intervened.  They'd won the right to redevelop the Royal Arsenal, a huge stretch of former Ministry of Defence land between the town centre and the river.  Right now, it takes about 20 minutes to get to Canary Wharf from Woolwich, changing from the DLR to the Jubilee Line at Canning Town.  Crossrail will transform that into a single train journey taking just 8 minutes.  That sort of transport gain was worth Berkeley paying to build the station box out of their own pocket. 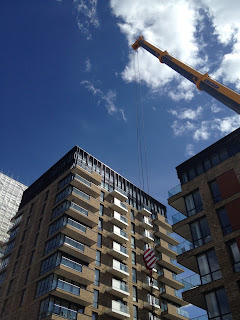 It'll turn what is, at present, a slightly soulless, slightly desolate collection of flats into a hub.  And since Woolwich town centre is just over the road, the money will hopefully spread further into the town.

I stood over looking the hole in the ground and waited for the rest of my tour party to come through security.  There were twenty of us, a pleasingly random collection of Londoners.  They were a microcosm of the insane variety of people the city is home to.  Two aging hippies with long grey hair.  A neat middle-class woman in a leather jacket.  An enthusiastic Scot and her Chinese boyfriend, accompanied by their tall English friend.  A Sikh couple.  Two teenagers with neon coloured hair and tattoos.  And my favourite type of Londoner, Hot Jewish Guy With A Bubble Butt And A T-Shirt You Could See His Nipples Through. 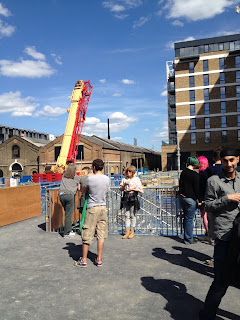 Plus, of course, me: the fat railway nerd.

There was a brief talk about the engineering achievement from Mick, the project leader.  He proudly told us that the handover date for installing the railway had been set at June 10th, 2015, in their original tender documents, and that date would be met.  Then we descended into the station down a flight of metal steps, accompanied by our guides, Patrick and Thibault (see?  Diversity). 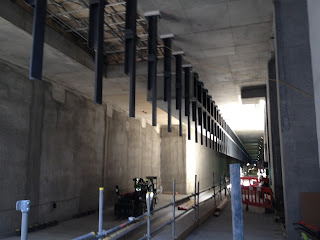 We were now in the station box, stood close to the island platform.  The metal posts hanging from the ceiling are for the platform edge doors.  Unlike on the Jubilee Line, the whole rail area will be screened off from the passenger part, creating sealed areas.  I peeked into the distance but I could only just see the distant end of the colossal station. 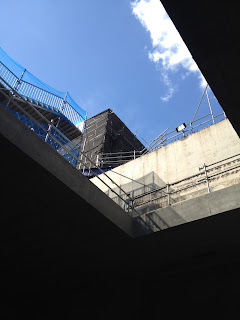 A few more steps and we were at track level for the walking part of our tour.  We were going to actually walk from one side of the Thames to the other through the Crossrail tunnel. 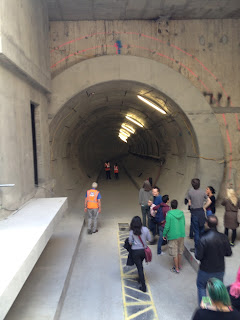 The air was cool, and it got cooler as we entered the tunnel mouth.  We fell almost reverentially silent. 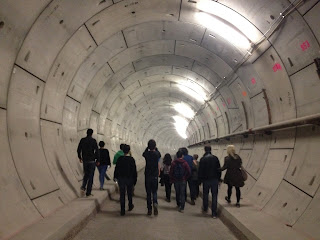 It's hard to describe the excitement I was feeling as I advanced down the tunnel.  It was the thrill of being underground, then, under the water. 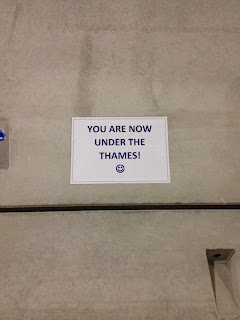 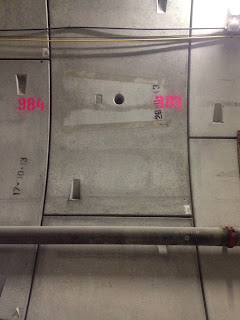 The tunnel was made by huge boring machines, and the concrete segments were then laid into the wall behind it.  They are locked together; each one was pushed in place, and a keystone holds them tight.  There's no need for any further reinforcement, except for round the cross passages, where steel beams are needed to hold them together as the hole in the wall breaks the tessellation. 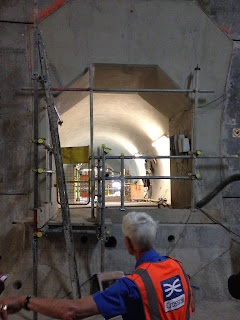 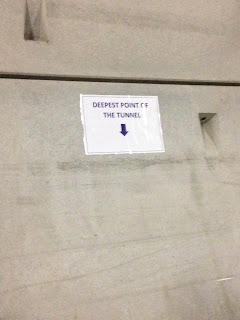 The deepest point of the tunnel is, weirdly, not the halfway point; that was a few metres further down.  I'm sure there's a perfectly logical engineering reason for this. 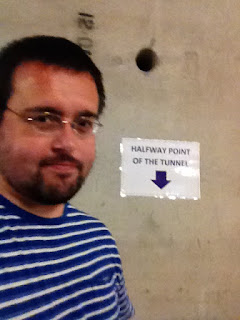 Apologies for the crappiness of some of these pictures by the way.  We were told that bags would not be allowed in the tunnel, so I couldn't bring my camera, and had to use my phone to take all the shots.  However, some of the women had handbags and bum bags, and they were let in, not that I'm bitter and annoyed or anything. 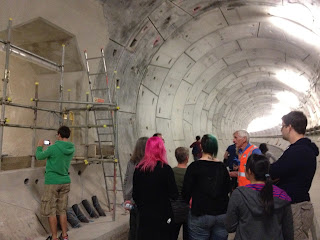 After what seemed like only a few moments, we were passing a sign saying End of the Thames.  Without any other reference points, it was impossible to gauge how far we'd walked, or how fast.  It was a long, undulating curve of grey concrete.  I placed my hand on one of the tunnel segments and was shocked at how cold it was; it almost felt damp. 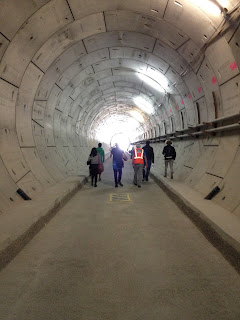 Then the literal light at the end of the tunnel.  It was astonishingly bright, and impossible for us to see beyond.  It was a bit like coming out of the womb.  The curved walls gave way to a larger chamber, built for emergency access and ventilation. 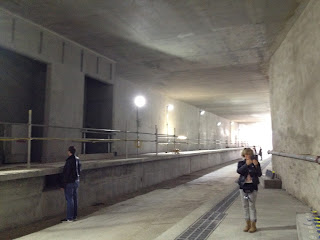 All that was left was the last few metres walk out of the tunnel and into the sunshine.  But why tell you about it, when I can actually show you what it was like through the medium of poorly shot iPhone video?

Why yes, I am available to film all your important life events.  E-mail me for prices. 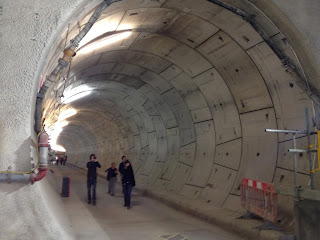 In the bare sunlight, the bases of emergency stairs took on a surreal, almost artistic quality. 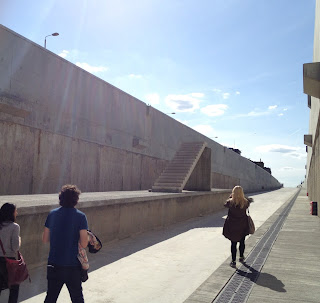 Another building company will be in soon to finish what has been started but until then, they were a Rachel Whiteread installation. 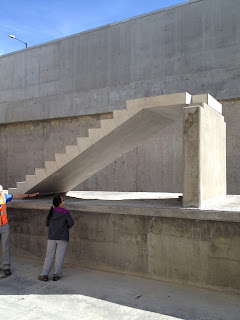 Slowly the floor rose to take us up to ground level.  On the north bank of the river, Crossrail has taken over the old North London Line.  That was cut back to Stratford in 2006; the section from there to Canning Town became the DLR, and now Crossrail is using its route to get to Custom House. 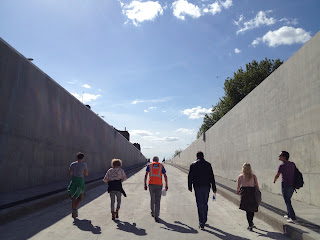 Suddenly there was noise again, and buses, and the huge hulks of sugar refineries looming over our heads.  London was reasserting itself. 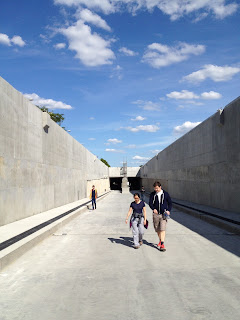 A tiny stand had been set up, and two friendly volunteers handed out leaflets about the tunnel and Crossrail, and we all got a badge.  I don't know where I'd ever wear the badge, but I'll add it to my Station Master and I Get Around By Merseyrail Underground ones.  I left the railway behind, heading up to London City Airport DLR station with a big stupid grin on my face.  It was a wonderful hour of fun, and something I will remember for a long time.  I can't wait for Crossrail to open in 2018, just so I can take a train through here and tell the person sitting next to me, "I walked through this tunnel once, you know."

Then that person will change seats. 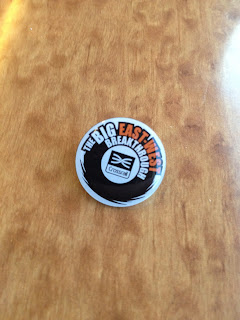 Email ThisBlogThis!Share to TwitterShare to FacebookShare to Pinterest
Labels: Crossrail, Ian, London, MerseyTart on tour, something really rather wonderful

Yeah, cos you never go anywhere interesting in London, do you DG?

I find it hard to believe that Woolwich can be enhanced by anything, but I hope it does!