A Load of Twits

Unless you've literally just fallen out of your mother's uterus (in which case, well done for being able to read at so young an age) you'll have spotted the Tour de France went through Yorkshire over the weekend.  I'm not going to repeat the endless Yorkshire/French gags - "the winner's three old men in a tin bath" etc - not because I'm above that sort of thing, but because they've all been done.  Instead I'm going to focus on Northern Rail, whose Twitter account went le Tour crazy.  Not surprising, as the event caused huge logistical headaches: extra trains were laid on, but there were still queues snaking all over Leeds and Huddersfield stations, as well as many smaller ones that were unused to crowds.

Northern seem to have coped admirably.  Certainly their Twitter account remained buoyant, but then, they always are.  I've spoken about my love for their social media people before and the weekend's events confirmed it for me.  Plus, they ran a hashtag, #TdFselfies, which resulted in a load of staff members in yellow t-shirts doing duck face and generally looking like they were having fun.  Selfies are a bit overused now - unless they're in front of station signs, obv - but it did afford us a glimpse of people who normally remain hidden from view.

Take Northern MD, Alex Hynes, for example, who did le tour of his own around the network as they coped manfully.  I'm disappointed he's not Dutch, like his Merseyrail counterpart, but he makes up for it by seeming generally up for it: 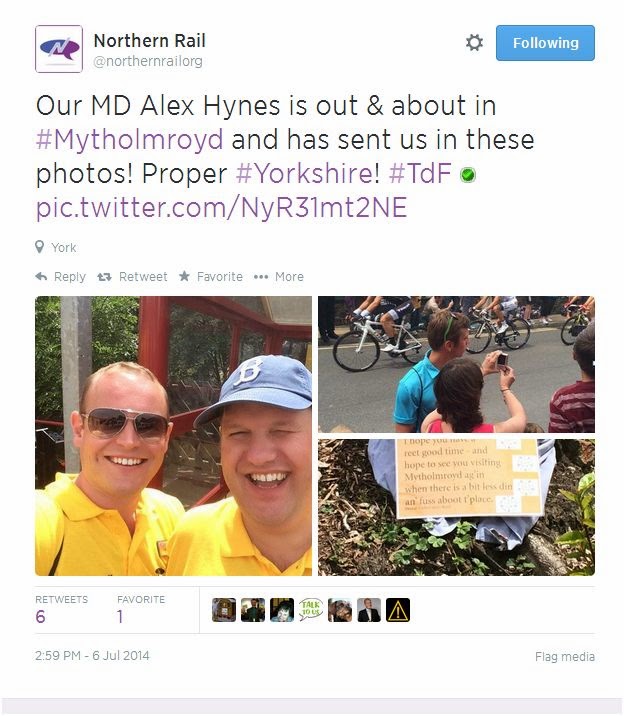 Also posting was this person, who I believe is the current queen of Northern Twitter, Lyndsey: 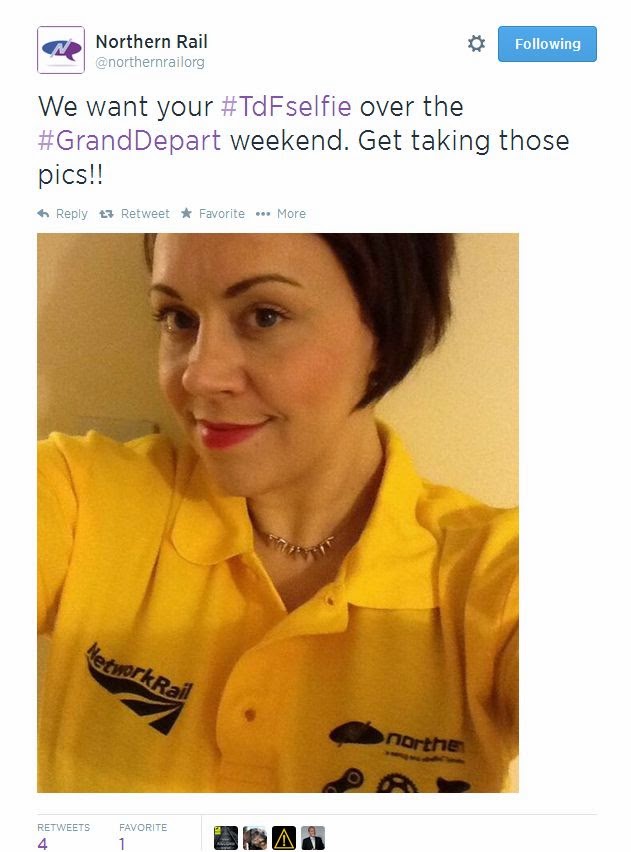 And then, of course, there was Tim.  I used to have to split my loyalties between Tim and Andy on the Twitter helpdesk, but then Andy left, so Tim took over my affections. 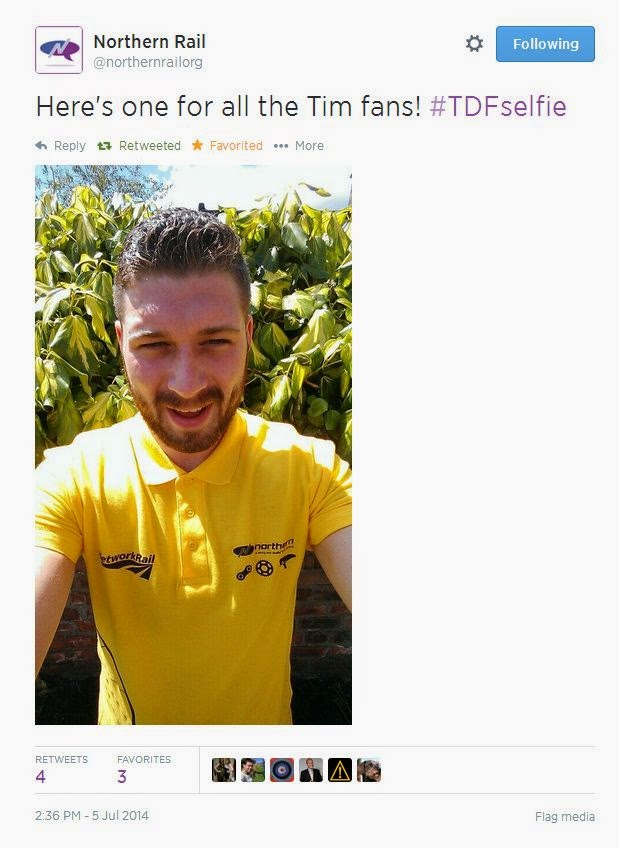 Not bad, I suppose.  I can't help but feel a little disappointed, a bit like the time I saw Paul Lewis from You and Yours on Breakfast for the first time and his face looked nothing like I'd imagined it would.  I'm not saying he's awful - far from it - but in my head he was perfect, and he turns out to be beardy. 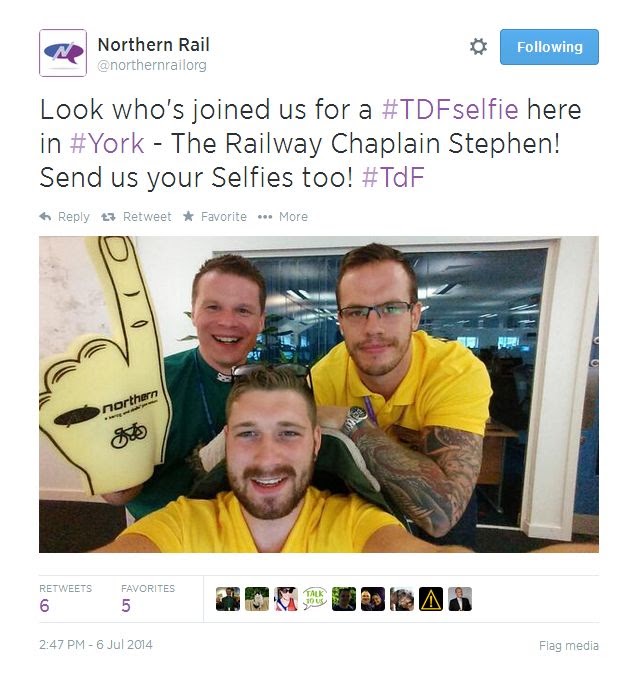 Yes, the York railway chaplain has replaced his dog collar with a red and white spotted piece of card.  Is that allowed?  Won't God be angry? 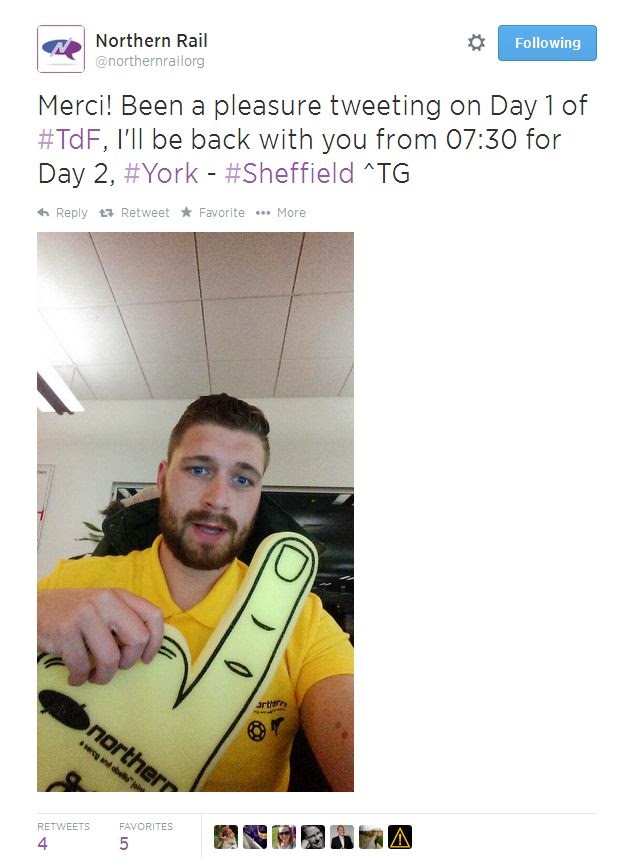 He looks knackered there.  That's what a hard day's tweeting does for you.  It doesn't matter, I still love you Tim and your random Twitter diversions, your unfailing ability to remain chirpy even as people abuse you long distance, and your crystal blue eyes.  Maybe have a shave though. 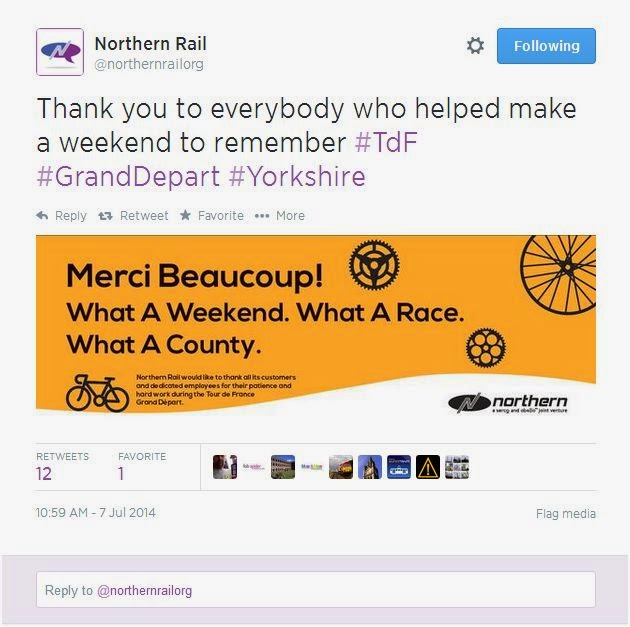