Before I go off on an Epic Journey With Little Purpose, I do a lot of planning.  In some ways that's half the fun.  Cross checking timetables, tracing Ordnance Survey maps, drawing up spreadsheets.  It saves a lot of faffing about, and it gives me the reassurance my OCD crazed mind needs.

The last day of my Grimsby trip looked like this: 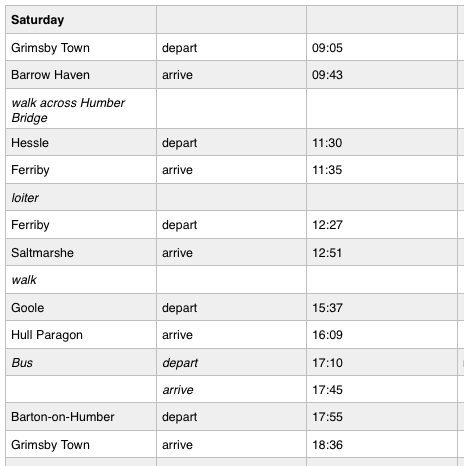 A nice busy day that would see me polish off the Barton Line and collect a few other stations in the Humberside area.  It'd also include walking across the Humber Bridge, which had been an ambition of mine ever since I first saw it.

My brain had other ideas.  Remember how, as a side job, I'm also a manic depressive?  I woke up that Saturday morning with a heart of deep dark coal.  I didn't want to get out of bed, never mind romp around the north east.  I'm not sure why - perhaps the exertions of the previous day had tired me so much I couldn't put up the resistance any more.  Perhaps my brain is just a bit of a bastard.  I would have been quite happy to wrap myself in the hotel duvet and spend the day watching repeats of Birds of a Feather on Drama.  Yes, things were that bad.

The only thing that stopped me from wallowing was the knowledge that if I didn't get out there and do it now, I'd have to do it some other time.  I'd just be delaying it.  I decided to revise the timetable somewhat. 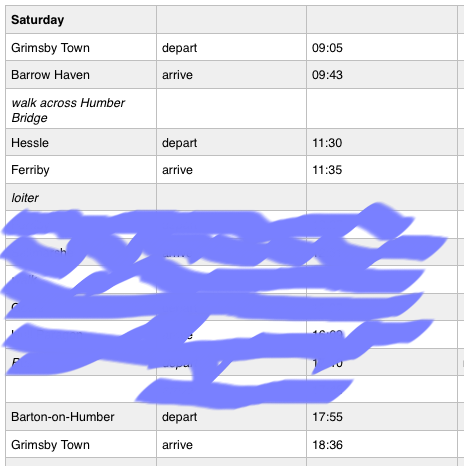 Cut out all that nonsense with Goole; it was a lot of effort to collect just two stations, and they were stations I could collect any time.  Loads of trains go through Goole.  Instead I'd go out to Barrow Haven, do my bit of walking across the bridge, collect the stations on the other side, then return for Barton-on-Humber. 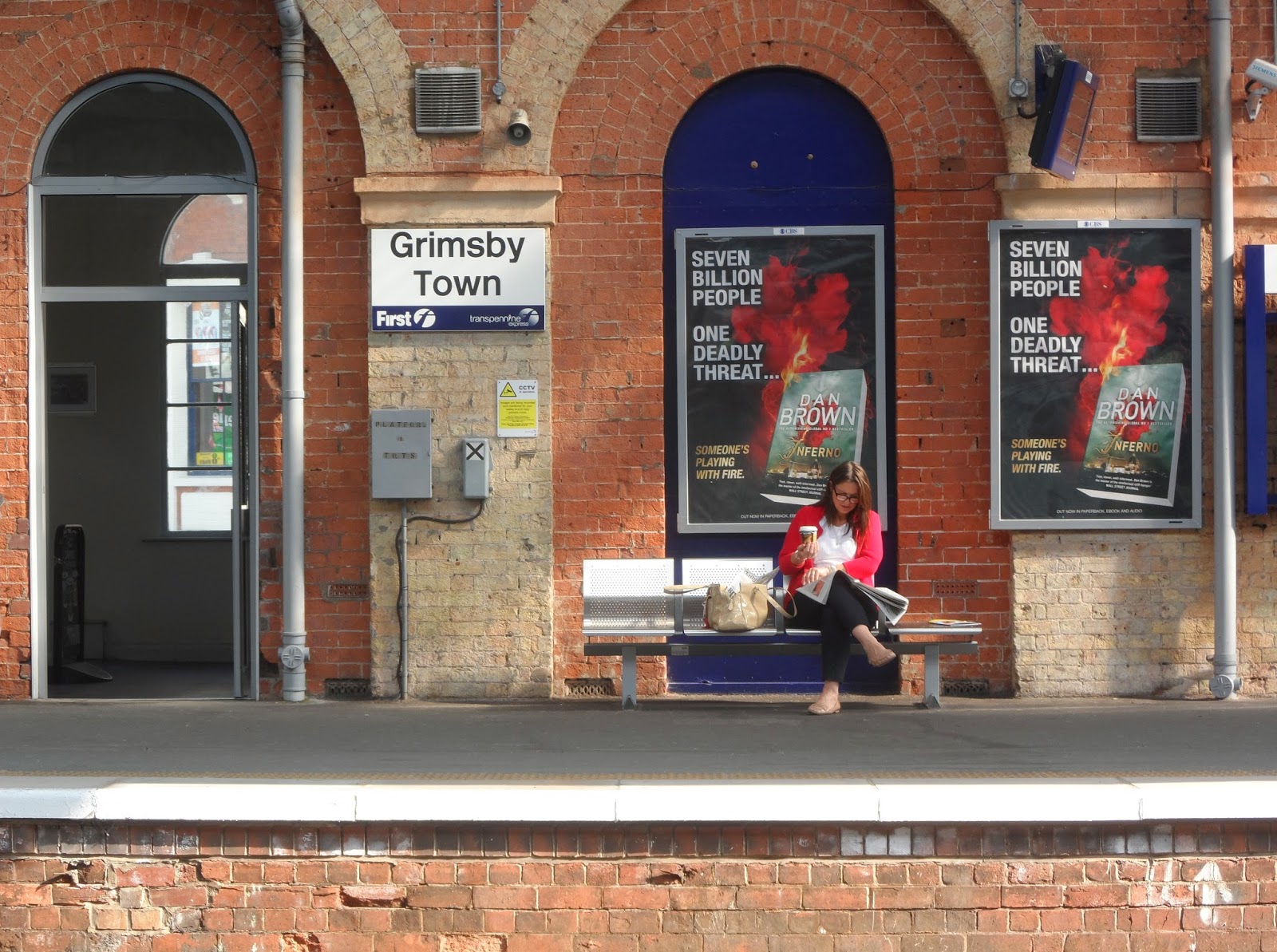 My platform at Grimsby Town was packed, though not for my train.  They were Saturday shoppers waiting for the TransPennine Express service to Sheffield.  Only one person boarded the Barton train with me, an old man who was known to the guard.  They chatted together merrily all the way to Stallingborough.  We picked up a few more passengers en route, most of whom then got off at Habrough to catch that same Sheffield train, and by the time we reached Barrow Haven it was near empty. 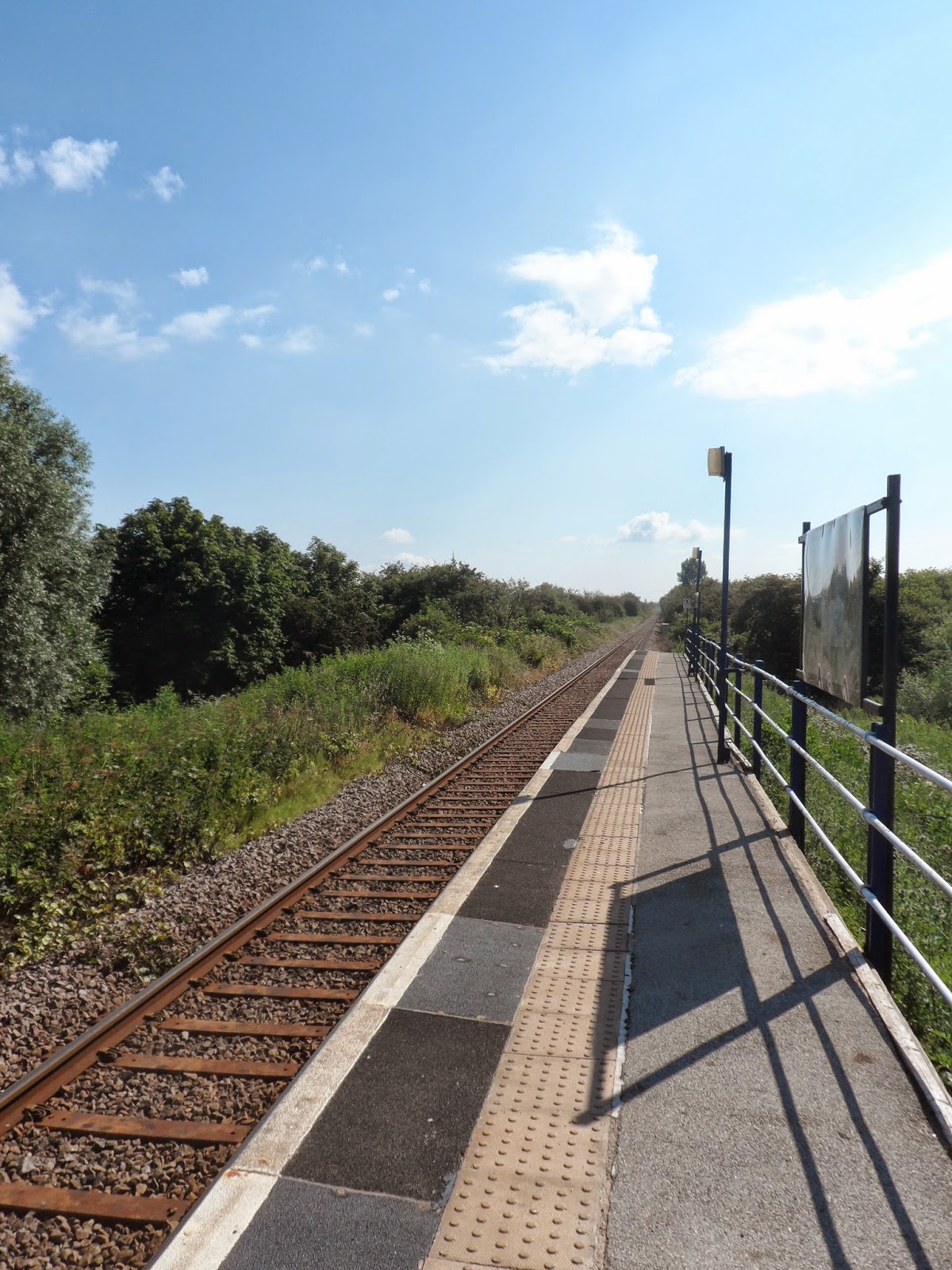 I climbed off the train and let it disappear into the distance.  As the name implies Barrow Haven is a tiny halt beside a small harbour.  It's surrounded by grass and trees and once the train had gone, it fell silent. 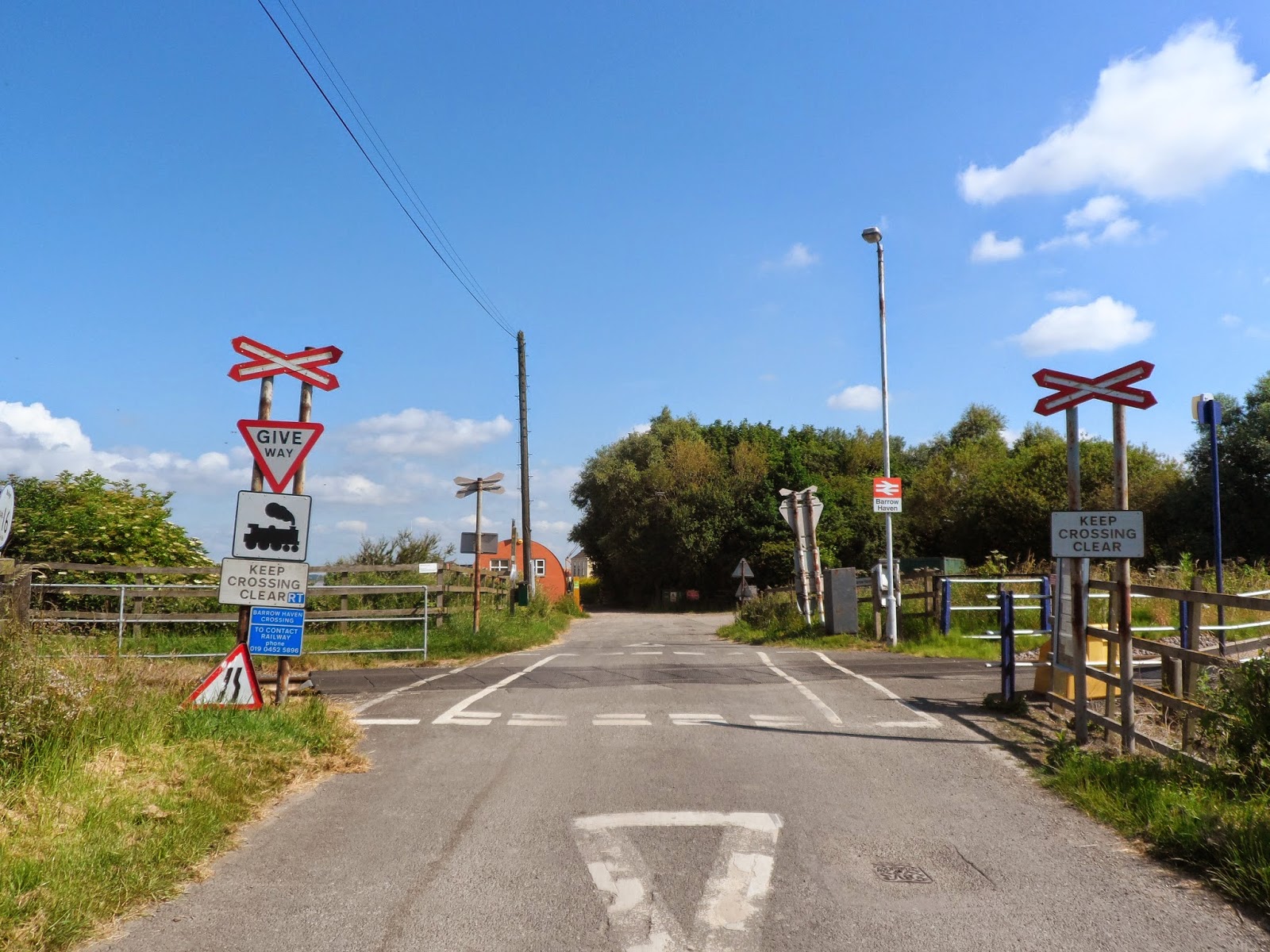 It's so quiet that the level crossing goes unguarded.  A man wandered through with a little terrier, barely pausing at the tracks, knowing full well the train had been and gone. 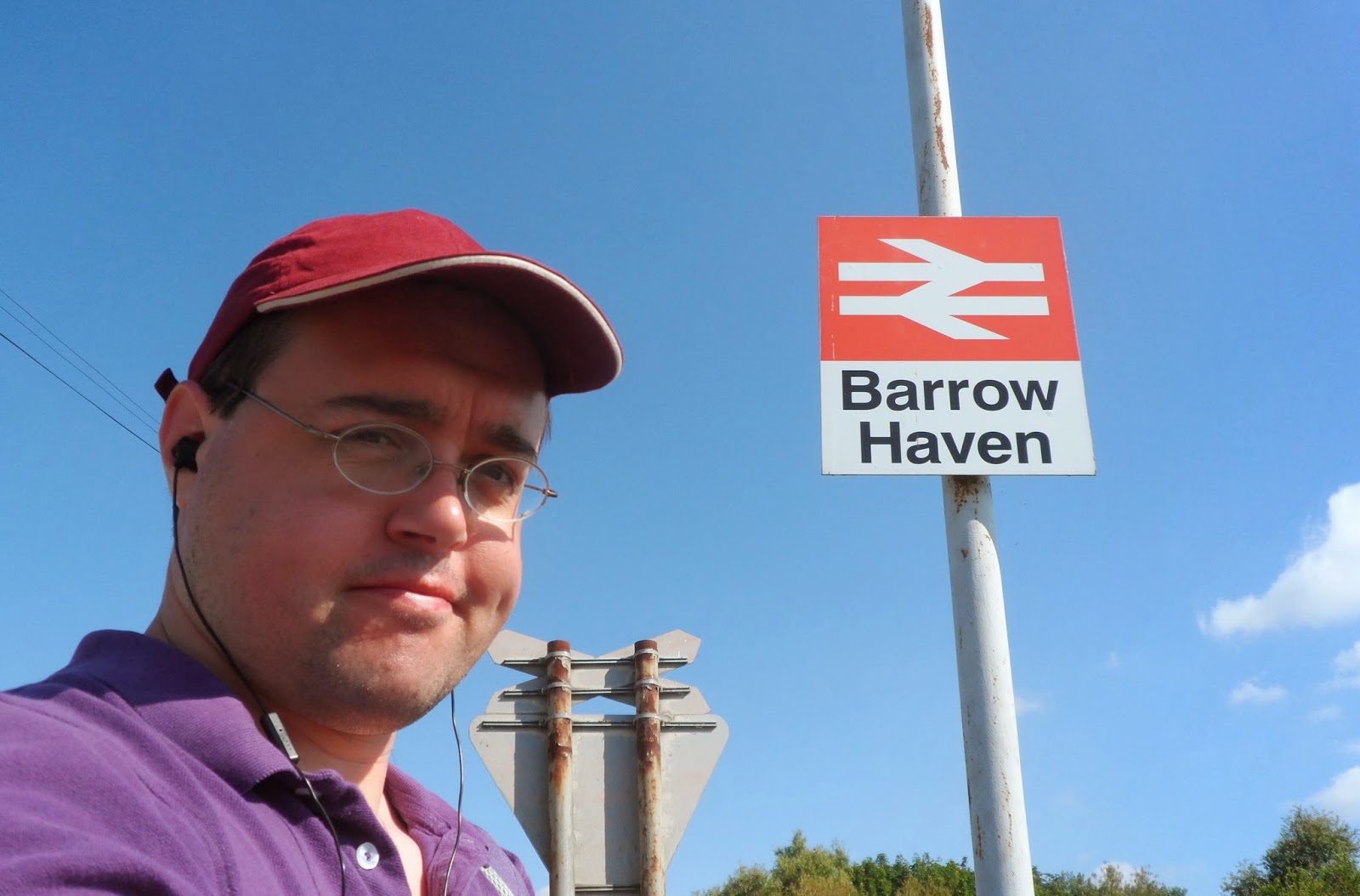 I'd not been sure how I was going to cross the river.  The maps I'd consulted had been distinctly cagey on the matter; there was a railway bridge, but I wasn't sure if there was a footpath.  I actually discovered a very sensible solution; when the line had been reduced from double to single tracks, the space left was barriered off and made into a footpath across the water.  I can only hope that this kind of intelligent thinking spreads to other parts of the UK - railway bridges with no footpath are a bit of a bugbear of mine. 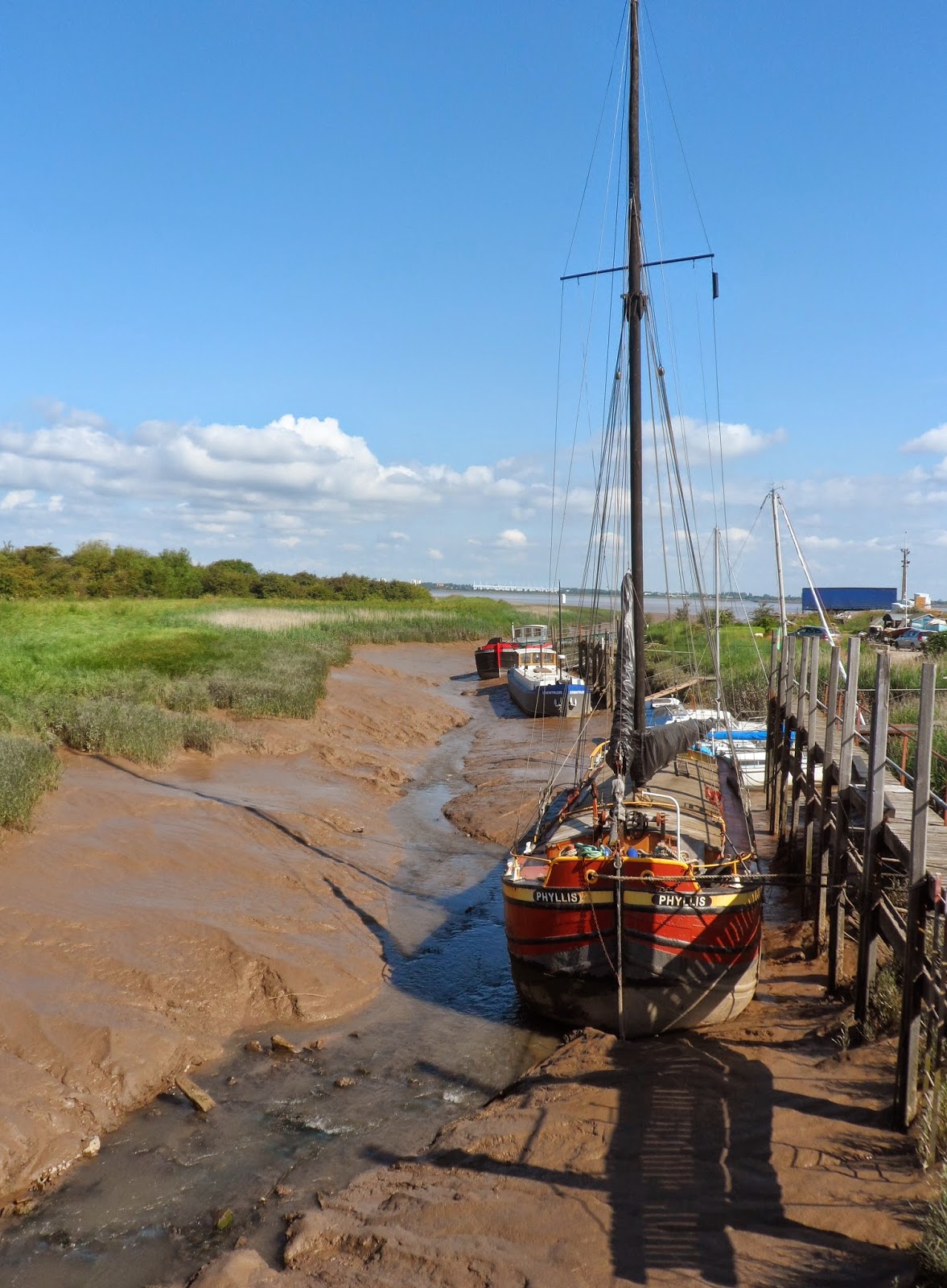 I was joining the brilliantly named Nev Cole Way, a long distance path through North Lincolnshire that followed the Humber estuary.  Soon I was on a low cliff above an expanse of sea grasses, with Hull just about visible in the distance.  Blue dragonflies flitted around my feet. 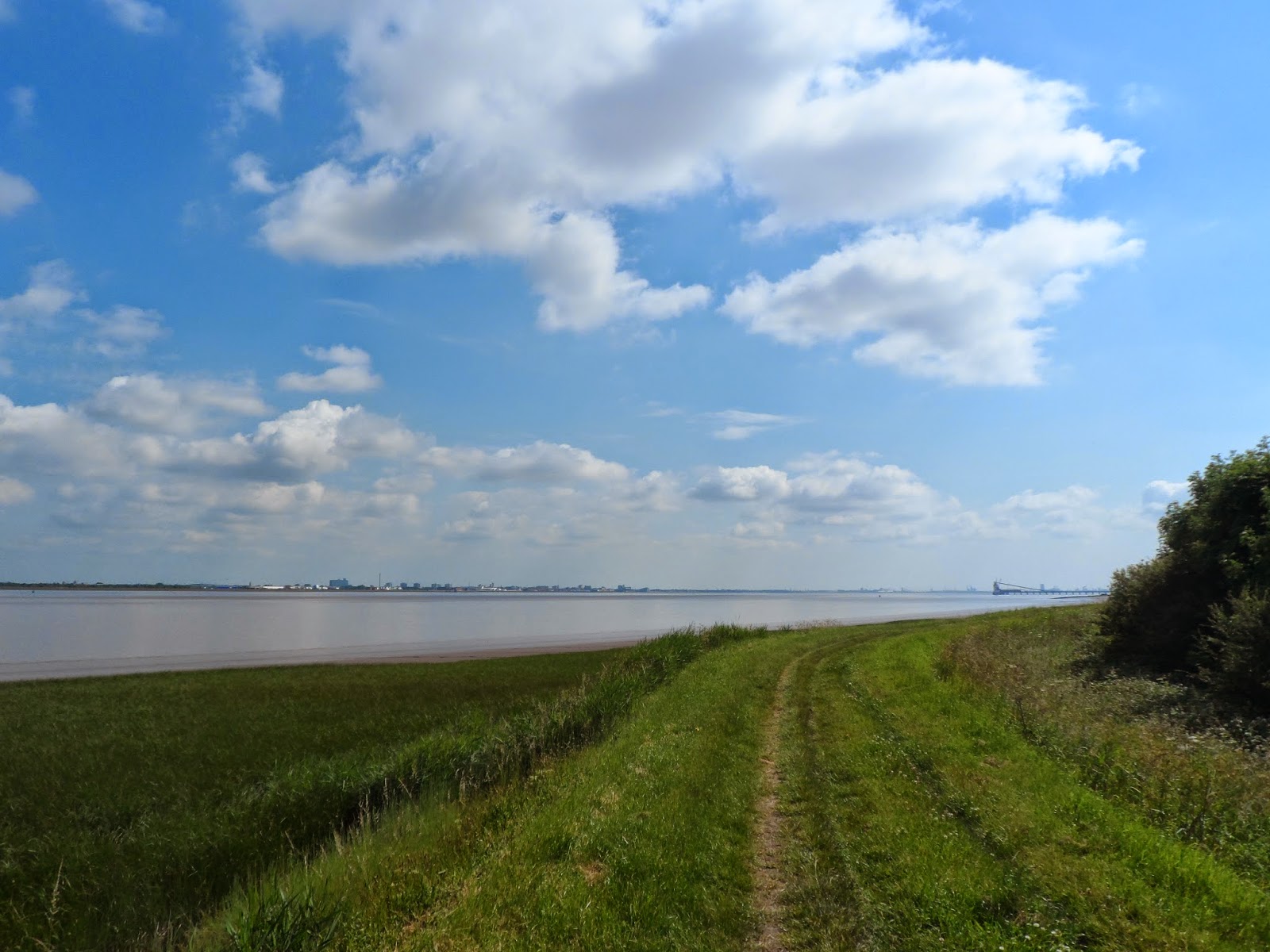 To my left were a series of square lakes, old chalk pits that had been filled in and now formed a nature reserve.  There were boats on them already.  Interspersed with them caravans had been set up; one man took advantage of the warm morning to hose down his mobile home. 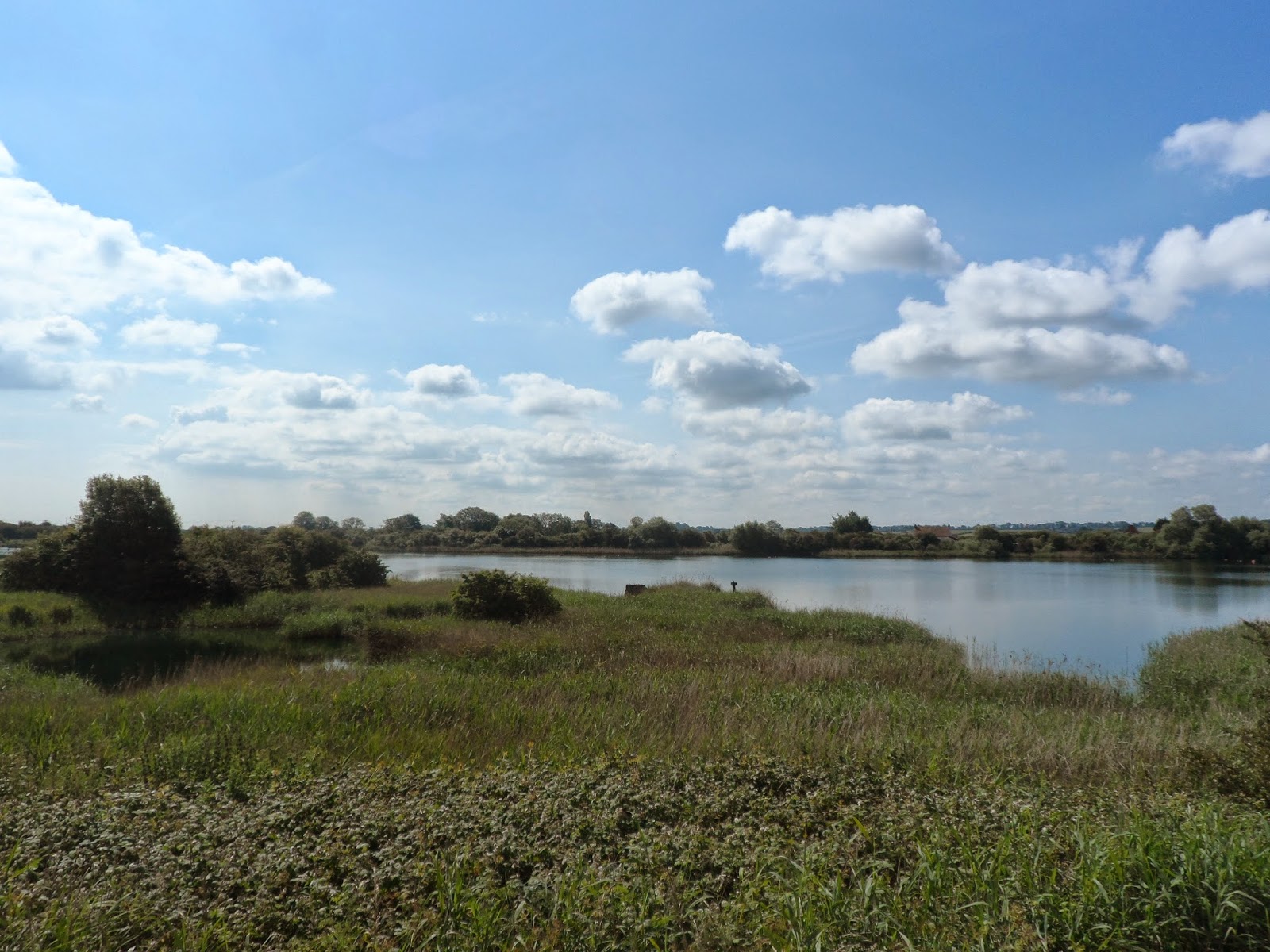 Up ahead of me, the Humber Bridge laced across the estuary.  It's astonishingly graceful, considering its size and construction material.  Concrete has been shaped into the simplest of forms that arc over the wide expanse of water.  The lack of competition around it means it's hard to conceive its scale.  Look at, say, the Brooklyn Bridge and you can compare its size to the buildings behind it.  The Humber Bridge is the only tall object for miles and as such it's hard to take it board.  This was the largest bridge on Earth for nearly twenty years. 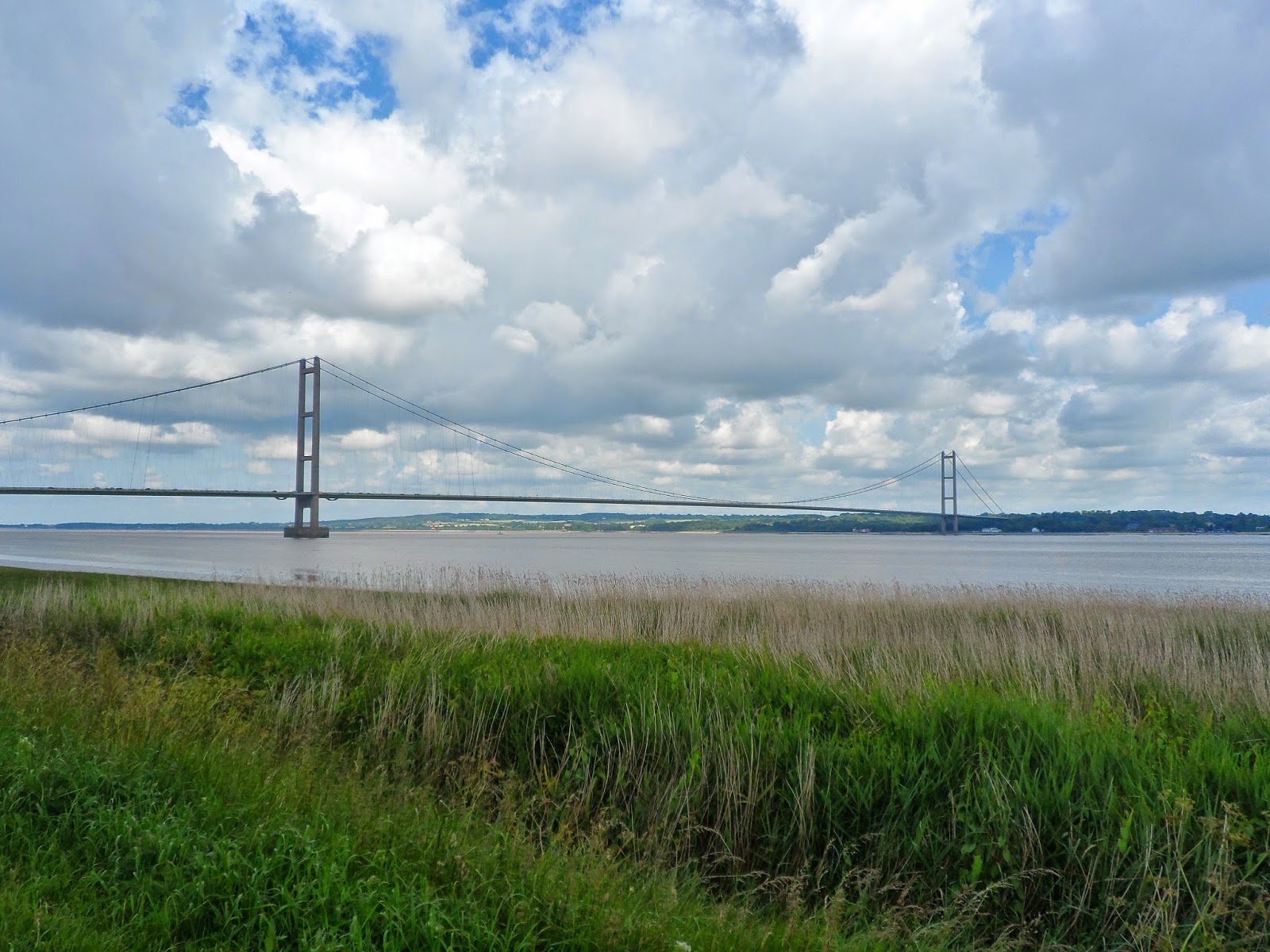 It should have lifted me, but I was still stuck in that funk.  I couldn't get up the enthusiasm for anything.  I began to revise my schedule even further in my head.  If I crossed over the bridge to Hessle, it would mean a lot of waiting around, and then I'd have to come back again, violating my "don't go back the way you came" rule.  The new look plan therefore became: 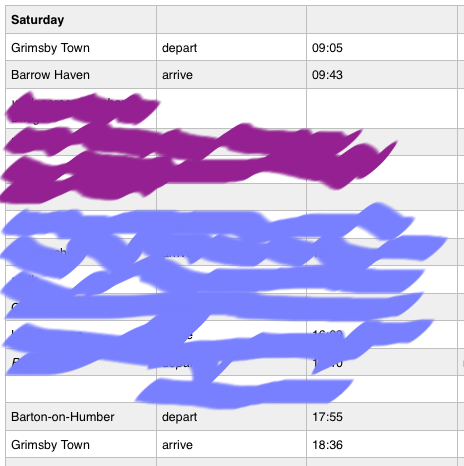 I'll admit it; that's not exactly a grand climax to the Barton Line.  Sorry about that.  But if I'm in that kind of low, it's probably not a great idea for me to stand in the middle of a very high bridge with a very long drop, if you know what I mean.

As I approached the footings of the bridge a weird green spacecraft appeared to my left.  Looking like a circular packing crate, it was ugly and sort of pretty.  It turned its back on the river, but wide windows peered out of its face. 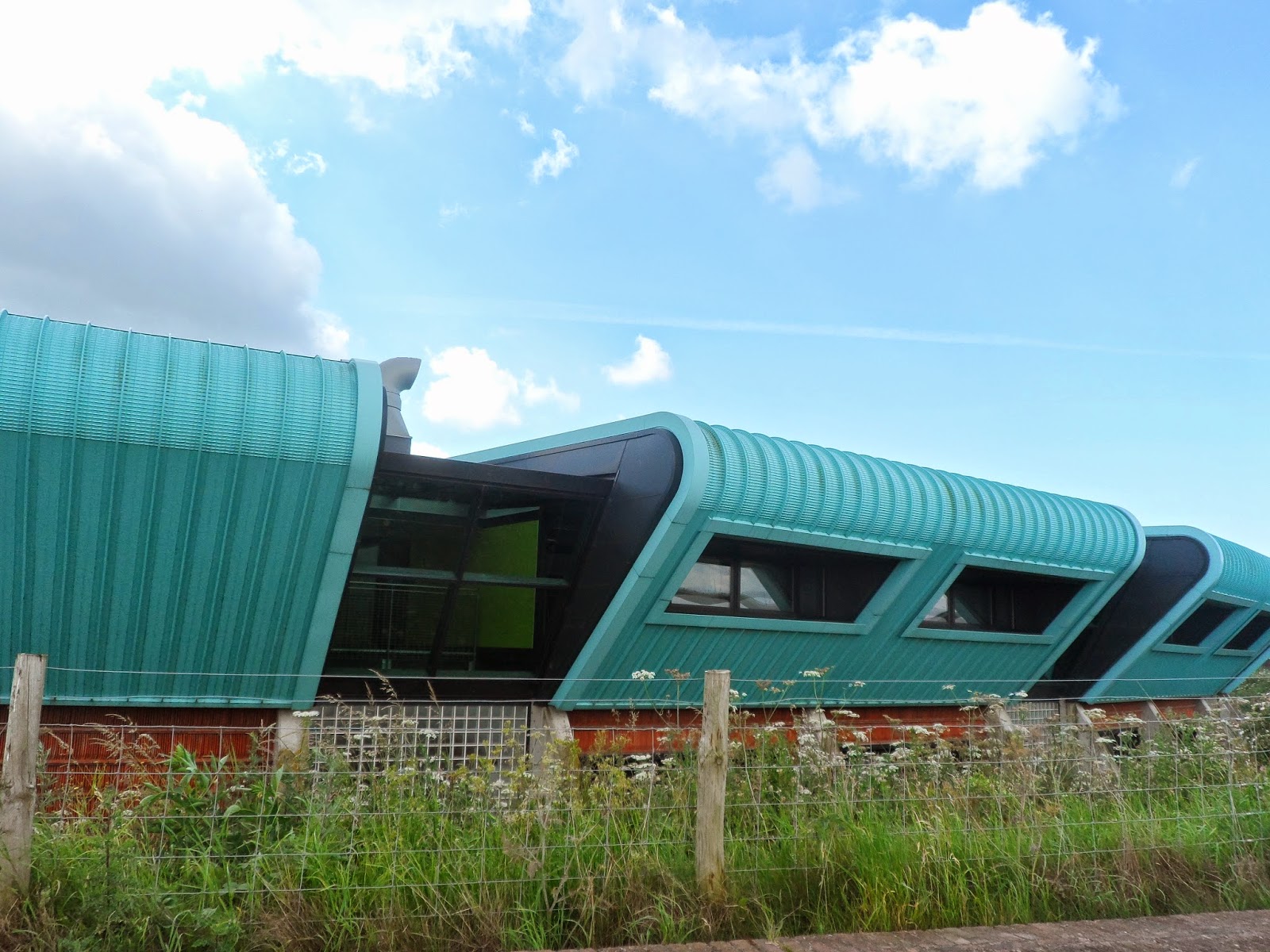 From the other side it made more sense; with its exposed front it reminded me of a beetle - hard on top, but then a fleshy exposed underneath. 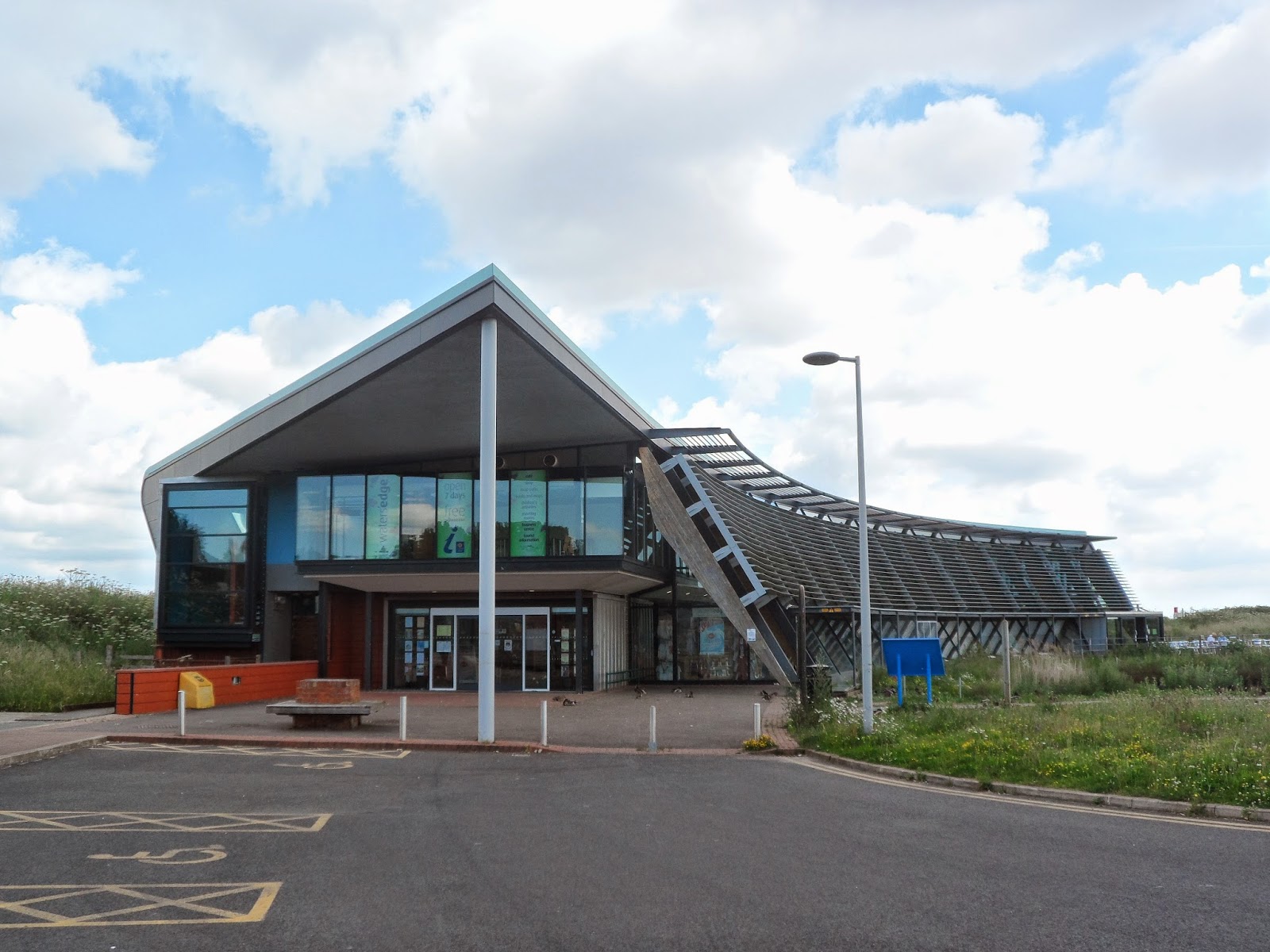 This was the Water's Edge vistor's centre, a place to pause and reflect on the country park around you.  Interpretive boards explained about how the estuary was formed, and its important ecosystem.  Cameras allowed you to spy, Big Brother style, on the local wildlife.  It constantly boasted about the buildings environmental credentials - rainwater flushing the toilets and shutters controlling the heat and all that sort of thing.  Personally I saw it mainly as a place to use the loo and have a sandwich.  I mean, it was all nice enough, but I was furious that it didn't once mention the bridge that loomed over us so I boycotted its bird pictures on principle.  (I later found out that there's an actual Humber Bridge Information Centre on the north bank, so they probably didn't want to duplicate what was already there.  Sorry). 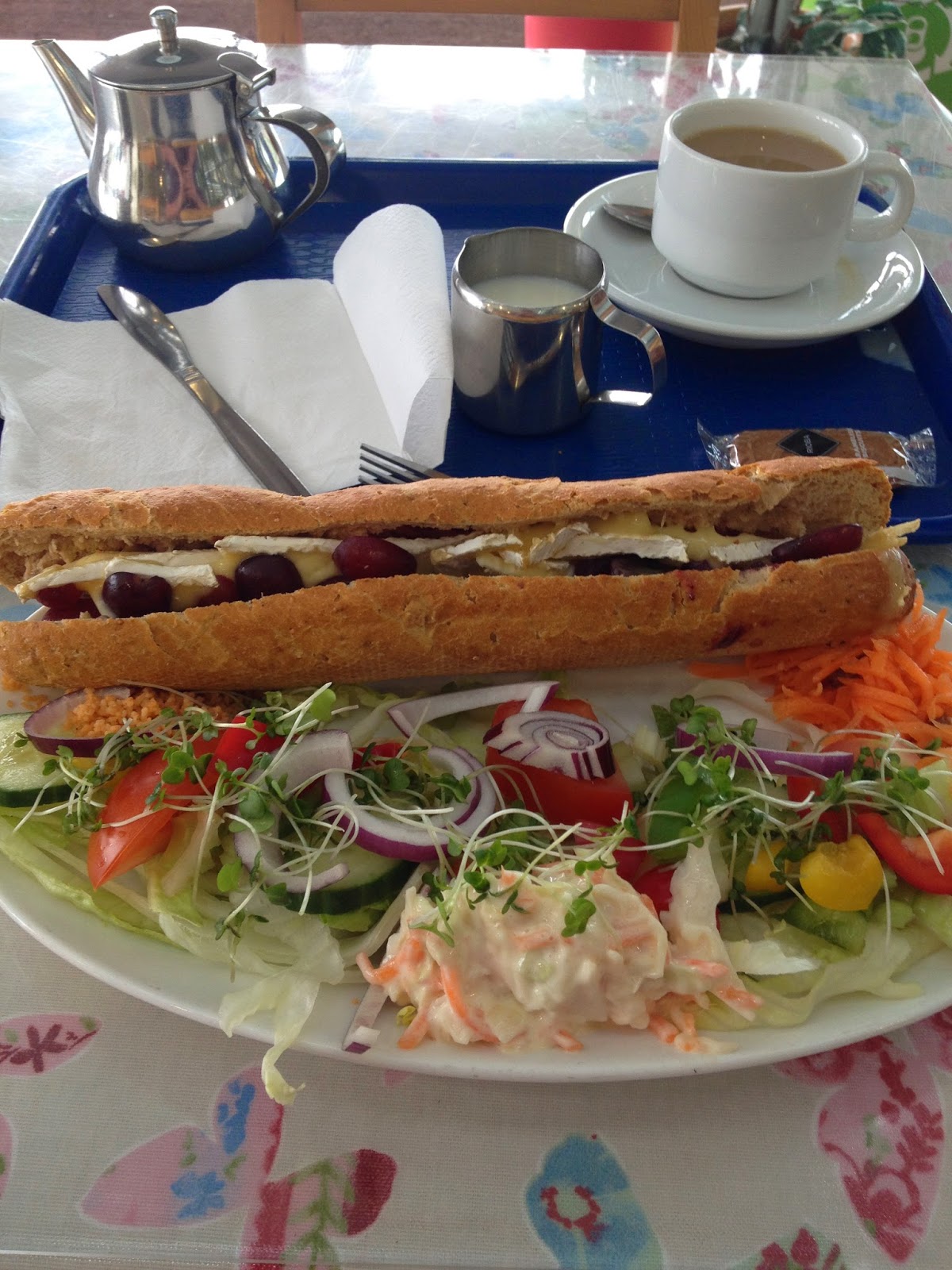 The cafe was a little overpriced, but popular.  A stream of pensioners on a day out and families taking advantage of the indoor playground appeared as I sat down.  My quiet cup of tea was suddenly surrounded by noise.  I wanted to go home. 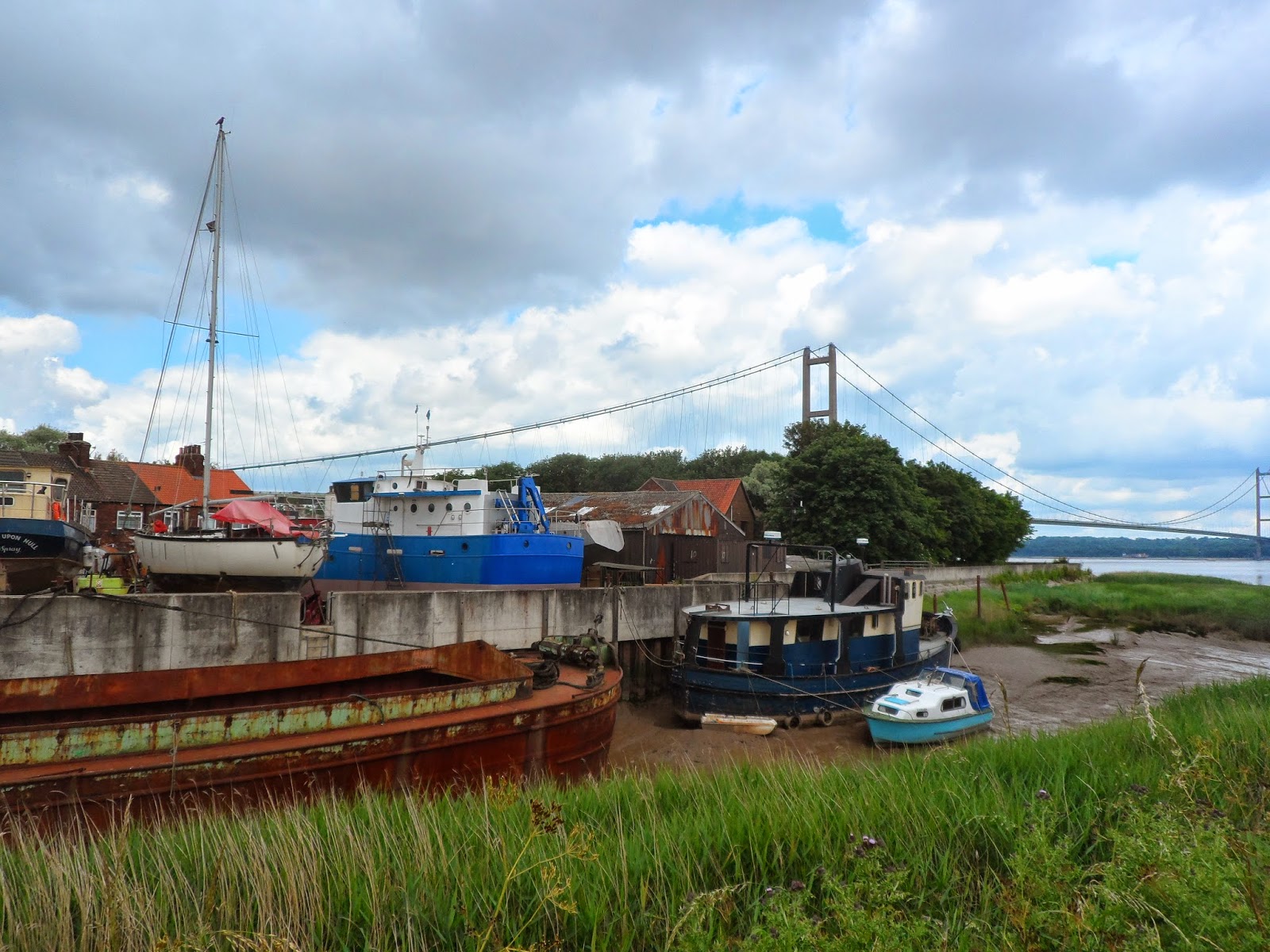 I strolled into town past a long inlet.  On one side there were old brick terraces; on the other side a vast new Tesco.  The Sloop Inn promised fine meals and drinks; down a side road, I spotted the flyover that took you up and over the bridge.  It must have been odd for Barton to suddenly acquire this huge new neighbour; to suddenly have a whole new world opened up to them via a five minute drive.  Although from what I understand there's not been much of a movement between the two sides since the bridge was built.  Hundreds of years of tradition haven't been overturned, and the south bank still looks south while the north bank looks north.

I wished they'd been able to join up the railway lines while they were at it.  String a second deck underneath the road so that trains could go from Grimsby to Hull.  That would have properly connected the two halves. 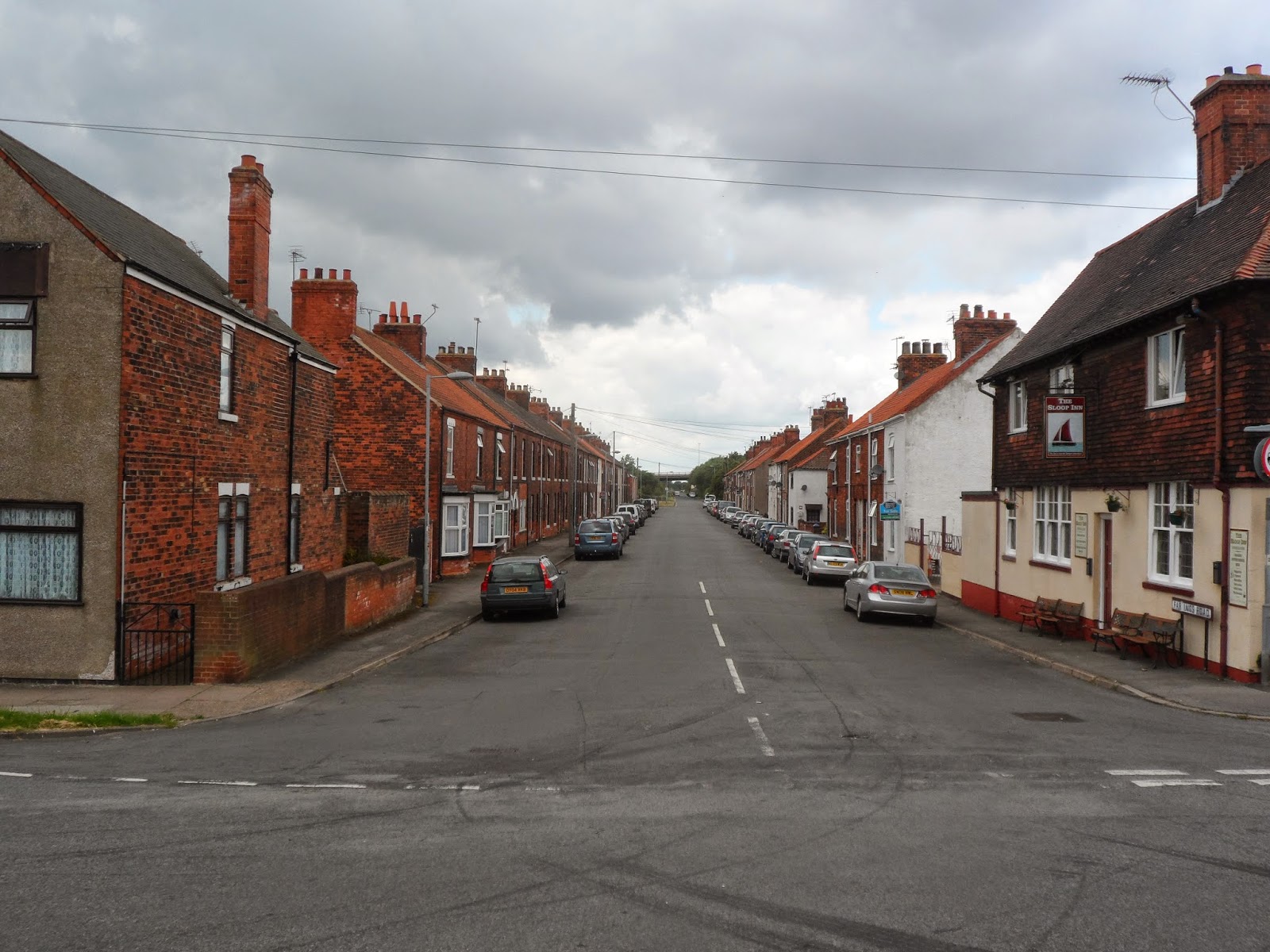 Instead, the Barton Line finishes up on the fringe of Barton-on-Humber town centre.  A generous bus exchange has been built alongside, so that people can connect to the Hull buses, but the station itself is a disappointing strip.  A single platform and a buffer stop and a bench. 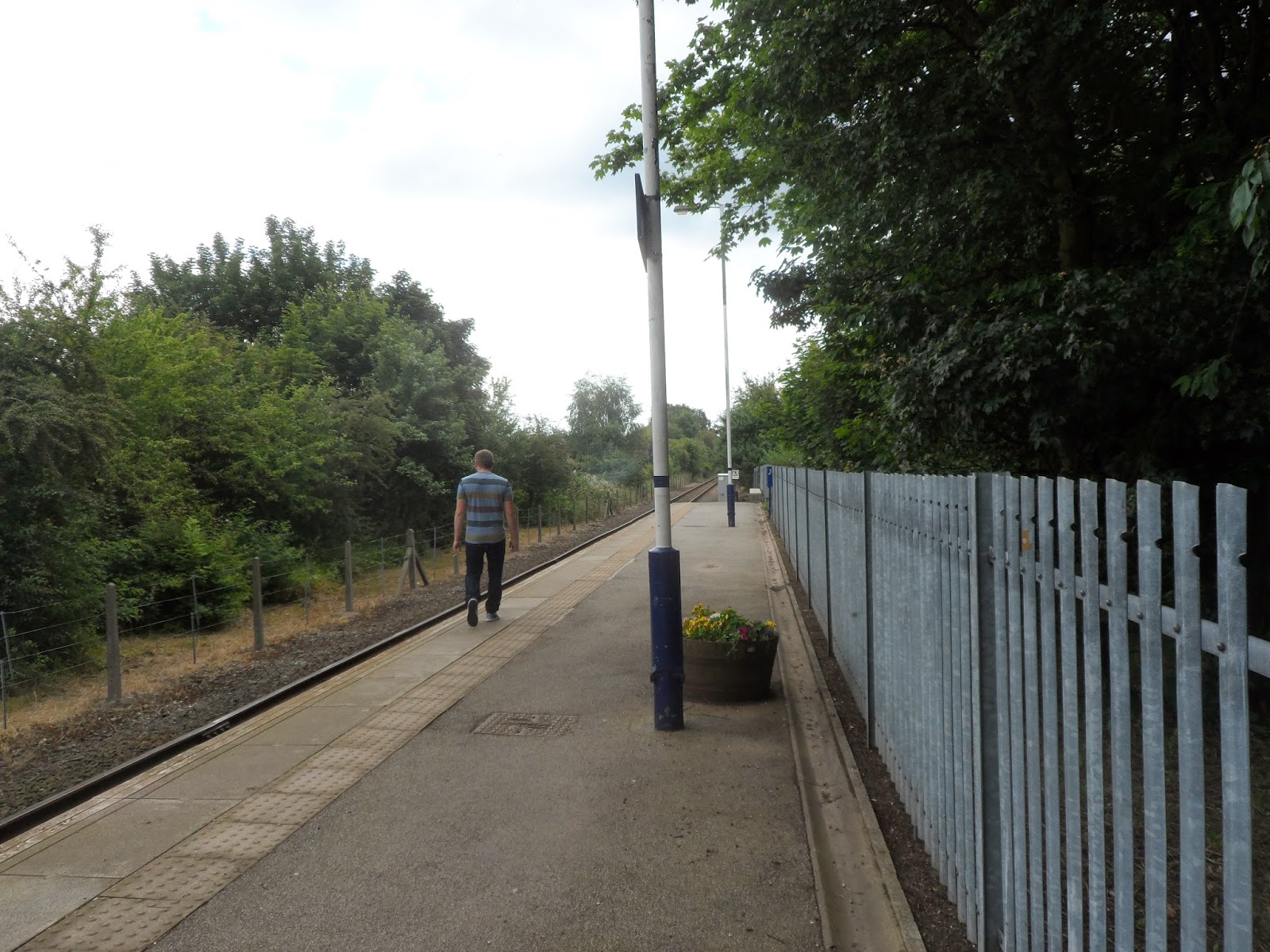 The warm morning had brought out the buckets and spades for the train to Cleethorpes.  The platform was filled with excitable children and less excitable parents in sleeveless tops.  A lot of them were sucking on e-cigarettes; it's not fair, I know, but the image of Jabba the Hutt and his hookah came unbidden to mind. 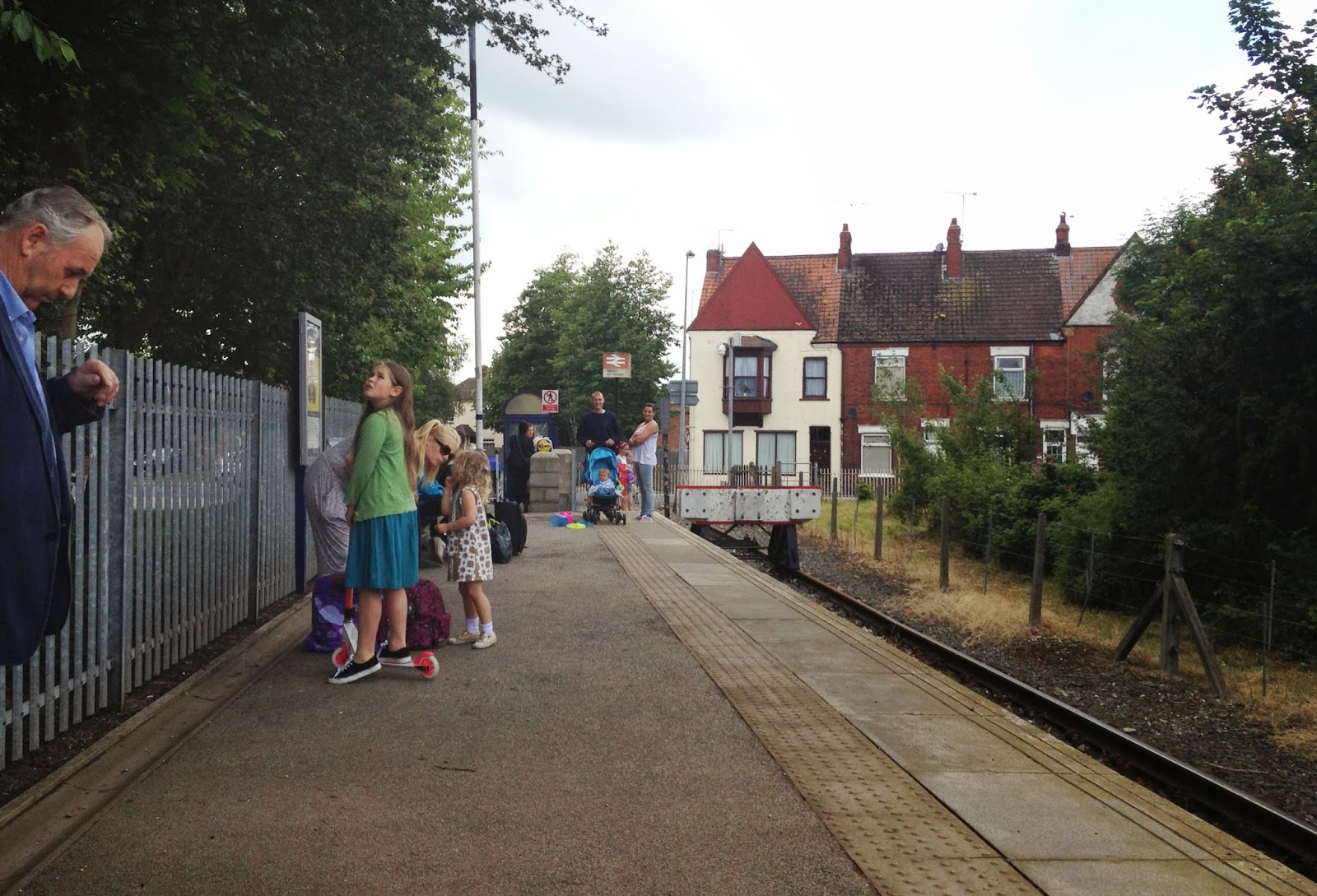 The train was late, but when it finally came, I clambered aboard behind a man with SAFC tattooed on the back of his neck and found a seat to hide in.  I scrunched up and wished for the train to go faster so I could sleep the afternoon away. 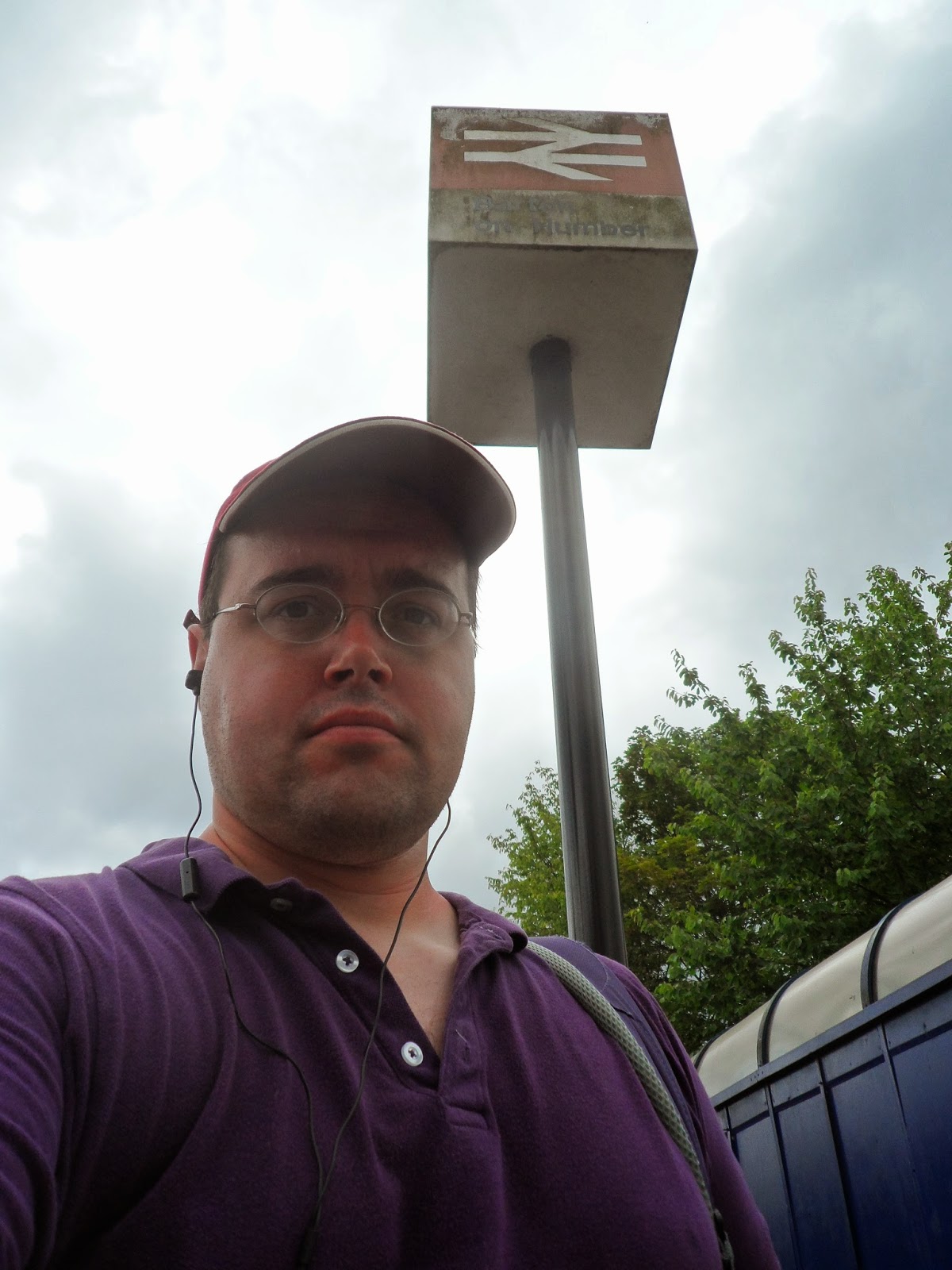