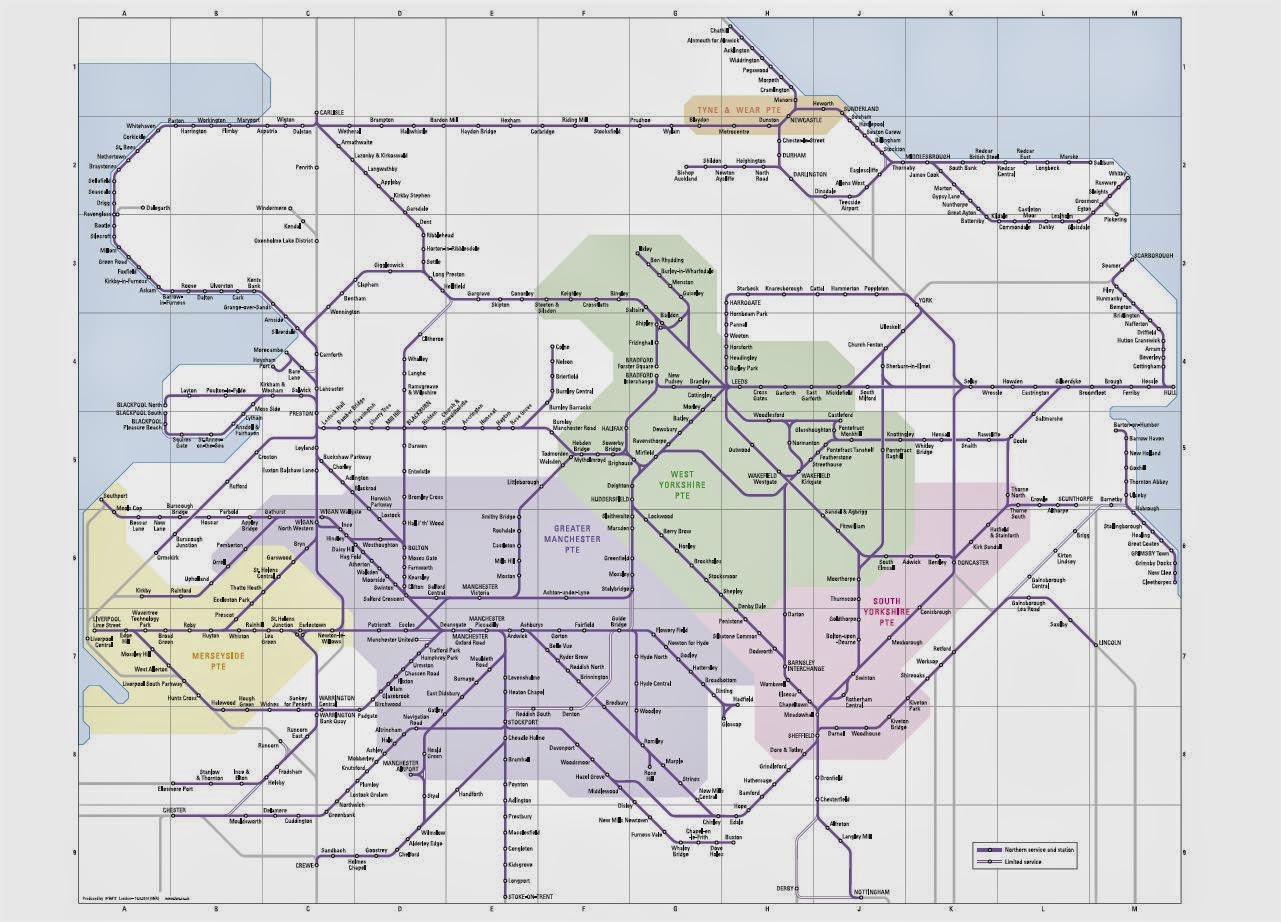 Ah, the Northern Rail map.  Touch it; cherish it; worship it.  View it as a false icon.  Love it as a bride.  Just don't think it's set in stone, because, dammit, the powers that be seem intent on changing it whenever possible.

Following James Cook University Hospital's appearance in May the Department for Transport has launched a two-pronged attack on its integrity.  The first came at the end of that month, when the DfT confirmed funding for two new stations in West Yorkshire.  Kirkstall Forge and Apperley Bridge will be built in areas that are seeing significant redevelopment money.  More importantly, they'll fill in a line on the map that hasn't got any stations at the moment, as shown in this highly expensive CGI recreation commissioned EXCLUSIVELY for this blog. 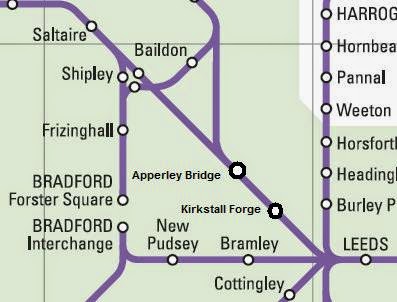 Many thanks to the geniuses at Industrial Light & Magic for their work.  The cheque's on its way, fellas.

Both stations are due to open next year, with ambitious reports suggesting May while more realistic ones reckon it'll be more like the Autumn.  While I like the name Kirkstall Forge - it has a sort of Game of Thrones, Tolkeinesque vibe to it - I hope Apperley Bridge is just a temporary moniker.  There's already an Appley Bridge, on the Southport to Wigan line, plus Appleby on the Settle and Carlisle.  Far too much room for confusion, particularly as we move away from ticket offices and onto self-service via the internet and ticket machines.

Which brings me neatly onto the DfT's consultation document, issued last month, on the future of the Northern and TransPennine Express franchises.  Both are up for renewal in 2016, and the Government is using the opportunity to play around with the boundaries and the conditions.  The continued electrification of lines all over the region also means that there are new route opportunities and potential new trains.

One area they're looking at in particular is redefining who serves what area.  The idea is to make TPE the North's "InterCity" service, ignoring all the boring small towns in favour of the big destinations: Liverpool, Manchester, Leeds, Newcastle and York - particularly the Leeds/Manchester corridor.  At present, TPE goes all over the place, as a quick glance at their map reveals. 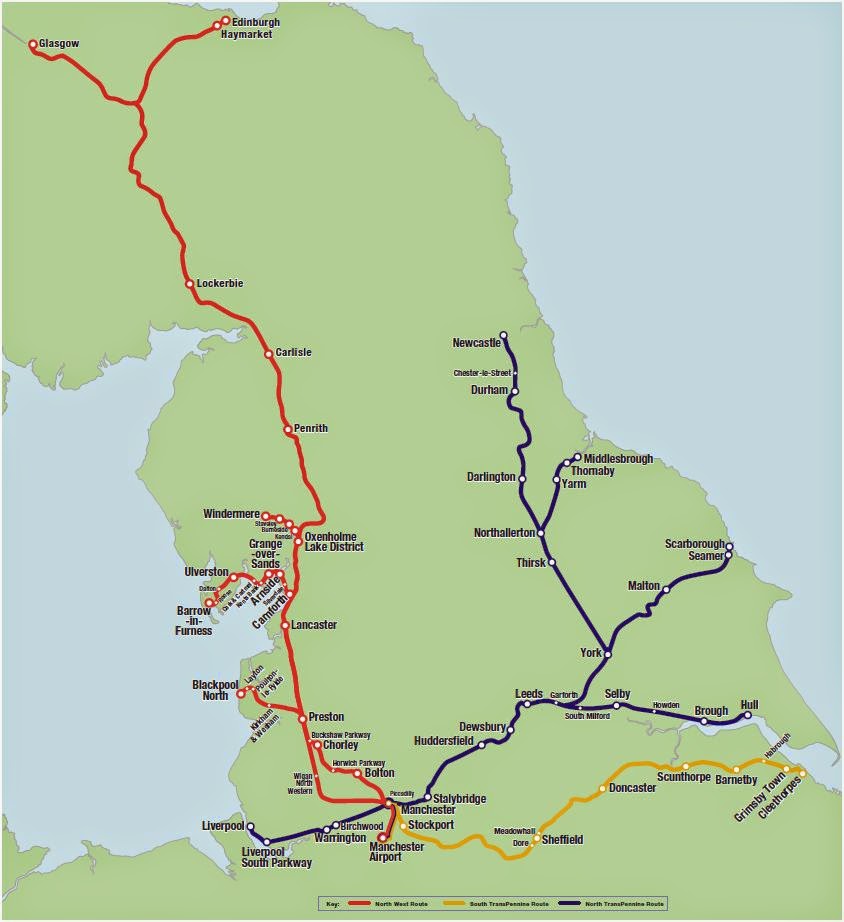 Incidentally I hate that map.  Far too geographic, far too much empty green space at the top and crammed in station names at the bottom.  I have noticed that I've done or will do pretty much all the stations on it though, which makes me itch to do the few that aren't on the Northern map.  Somebody stop me, please.

Under the new proposals (which are still up for consultation), the TPE services to Windermere, Blackpool North and Barrow-in-Furness will all be passed over to Northern.  All three are routes with small stations, and so fit better with Northern's profile as a local community and commuter service.  Northern already serve these routes anyway.  The line from York to Scarborough will also be passed over to Northern; this is mainly because there are no plans to electrify that route, so it'll mean TPE can run entirely electric trains without having to stick some ugly diesels in there as well.  (Yes, that'll mean Liverpool will lose its seaside route.  I'd better finish off the Scarborough-Hull line before it disappears).

In exchange, Northern will hand over... one of its trains to Hull from Doncaster.  Not exactly a fair swap.

Meanwhile, my recent trip along the Barton Line might have been all for nothing.  The DfT and I both came to the same conclusion: it's an odd little island in the Northern franchise.  They've got two proposals on how to deal with it.


(Oh, and the Liverpool-Norwich service will be split in two at Nottingham, with TPE taking over the western part and East Midlands operating the eastern bit.  I really must ride that service before it vanishes; five and a half hours on a single train stretching from one side of the country to the other!).

I'm broadly on board with all of that.  It does make more sense for Northern to have the local services, and in my experience, few people stay right to the end of the Scarborough and Cleethorpes services.  Most of the passengers were going to/from York and Sheffield, respectively.  Changing trains is always a pain but it's less so at large, important stations.

Northern gets a bit of a hammering in the report.  It notes that customer satisfaction is lower than average, and that it takes more money in subsidies than any other franchise.  As someone who supports the government subsidising all the rail services - perhaps in the form of NATIONALISATION - I'm not bothered by the second point, but the first is worrying.  However, the consultation notes that a lot of the blame can be placed on the trains.  According to its figures, 87% of the trains are diesel, with the average age of the units being over 24 years old.  The majority of the trains are wretched, ugly, pestilent Pacers, my nemesis.  It's hard to imagine any passenger being satisfied with a journey on one of those rickety death buckets.

Point 7.7 therefore brought a tear of joy to my eye:

No more Pacers?  O frabjous day!  Callooh!  Callay!  Though I don't like the words "as an option" in there.

There's a dark side to the new trains.  I don't just mean the fact that they're unlikely to be brand new, and will probably be cast offs from somewhere else in the country.  The report says that "the more expensive the trains... the harder it will be to justify current service levels where demand is low."  In other words, those of you at country stations will be able to enjoy waving at the brand new trains as they whizz through without stopping.  If they even come your way in the first place.  Put a different way, if you've got a request stop in your village right now, don't hold your breath for a once an hour express service to the nearest city with the new franchisee.  (It does say that "We are not considering line or station closures within this review" so that's something).

There's also a lot of talk about ticketing.  It notes that people travelling without tickets is a rampant problem on the Northern network.  All those unmanned stations, or routes that are so busy the conductor can't make a pass of the train to sell them.  There's also a general lack of barriers for those without tickets, and no Penalty Fare Areas.  The DfT has a few suggestions.  A move to "driver only operation" on the trains, meaning that the guard serves no purpose other than selling tickets and fining those without.  More ticket machines and "better use of technology".

Without any contradiction, the document then suggests "reviewing ticket office hours" and "redeploying staff" - which might mean extending the hours you can buy a ticket but come on: when has that ever happened?  Personally I'm totally on board with the Penalty Fare idea - if you can be fined for not having a ticket on Merseyrail, why not between Huyton and St Helens? - and I'm particularly excited by the DfT's enthusiasm for smart ticketing.  Mind you, they've been enthusiastic about it for years and we're still waving little bits of orange card around.

Finally, the consultation mentions a few brand new services.  Two of them I knew about - trains using the Todmorden curve to get from Manchester to Blackburn, and a better service from Bolton to Blackburn.  The third was a surprise to me - "the re-instatement of train services between Newcastle and Ashington."  There used to be a passenger route between the two towns until the mid-Sixties, but freight trains have continued to use it.  The decline of the collieries means that there's capacity for passenger services to be reintroduced, with four stations on the route being reopened.

In short, come 2016, the Northern Rail map could look radically different, with new stations and new routes.  I'd best get a move on and finish collecting it, or it'll be a neverending quest.

You can make your own comments on the consultation here.
Posted by Scott Willison at 12:46

If they transfer the Windermere services, I wonder if Northern will operate them right down to Lancaster, or just pootling back and forth to Oxenholme...

If I read it right the service will be a shuttle to Lancaster or Oxenholme, with the occasional train going on to Manchester Airport. Don't quote me on it though.