For reasons far too dull to go into here, I found myself in Manchester with a couple of hours to kill.  I didn't fancy a jaunt out into the suburbs so I decided to hunt out one of the city's dead stations. 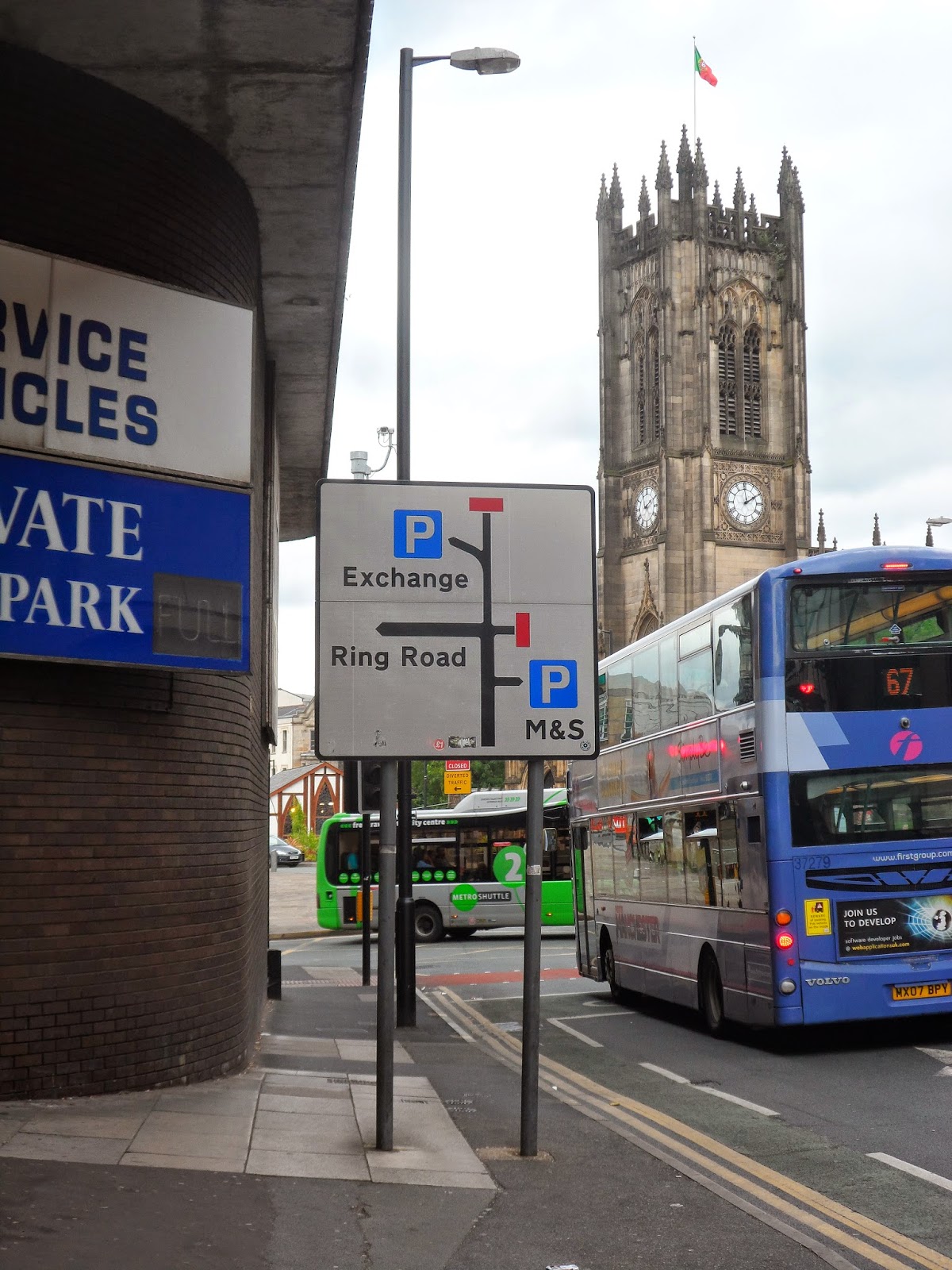 I say Manchester's lost station; technically speaking it was across the River Irwell, in Salford.  Exchange station was built by the London & North West Railway in 1884.  For many years they'd shared services with the Lancashire and Yorkshire Railway at the nearby Victoria station, but as the lines became more congested, the L&YR (who owned Victoria) gave its own services priority.  It meant that the L&NWR ended up scouting around for a new site.  Their solution was to build a new station further down the line - about fifty metres further down the line, in fact.

Exchange had five platforms, a long front and a bridge over the Irwell that delivered you right in front of Manchester Cathedral.  After the two railway companies merged to form the LMS in the 1920s, platform 3 at Exchange and platform 11 were extended until they formed one long platform, long enough to accommodate 3 trains at once and allow people to walk from one station to the other without leaving the building.  It was the longest platform in Europe. 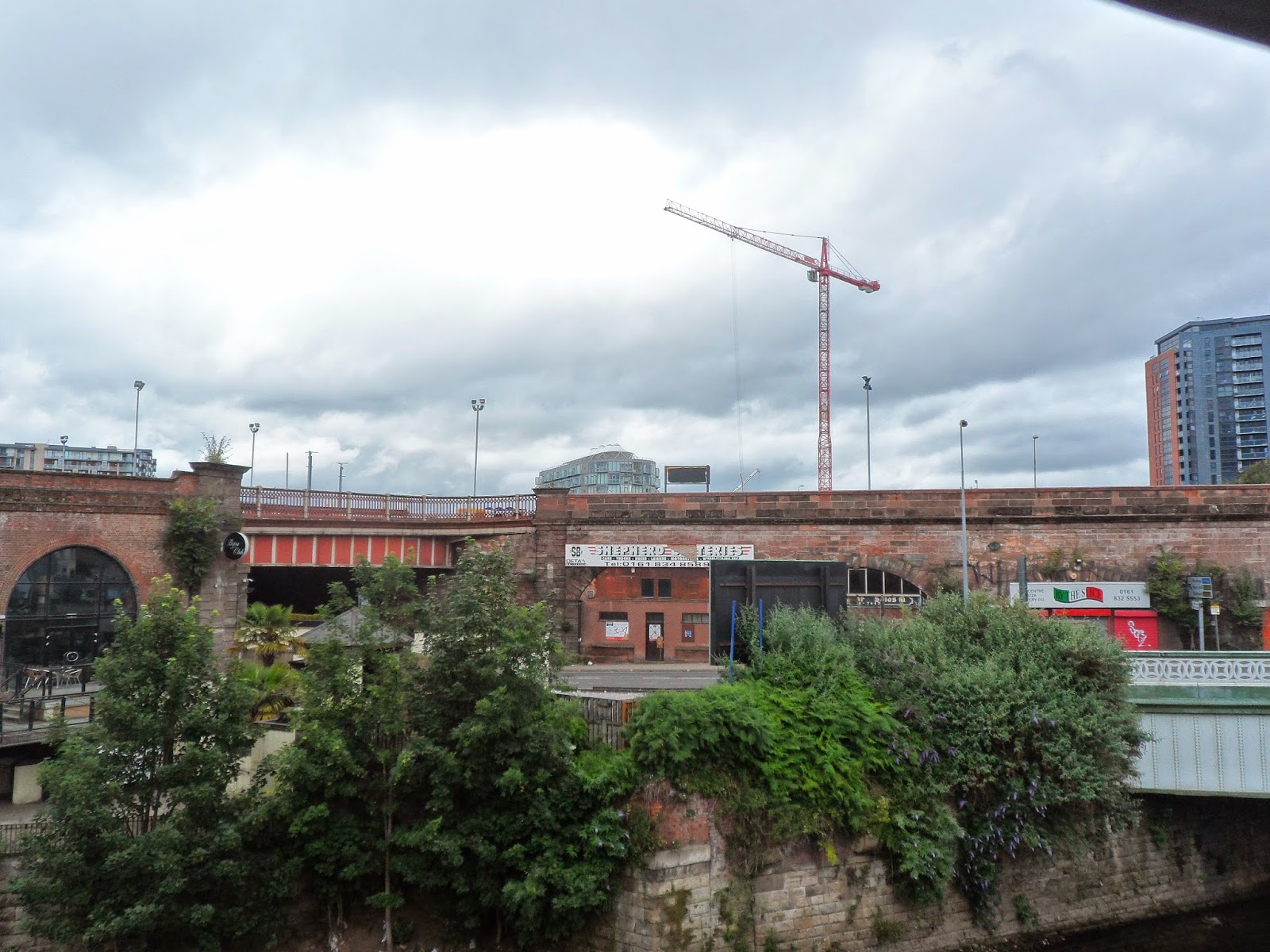 Two things did for Exchange.  The first was the Germans, who obliterated the station in 1940 and left just a few platforms with no building to speak of.  The second was rationalisation of the railways in the Sixties, where British Rail concluded that only one station was needed in that part of Manchester and diverted all the services into Victoria.  In May 1969 Exchange closed and for more than forty years it sat vacant, with the old station space used as a car park and the platforms and footbridges allowed to rot.

I'd long meant to have a look at this relic of Manchester's transport history.  Obviously, when I finally decided to go and have a poke around, it was too late. 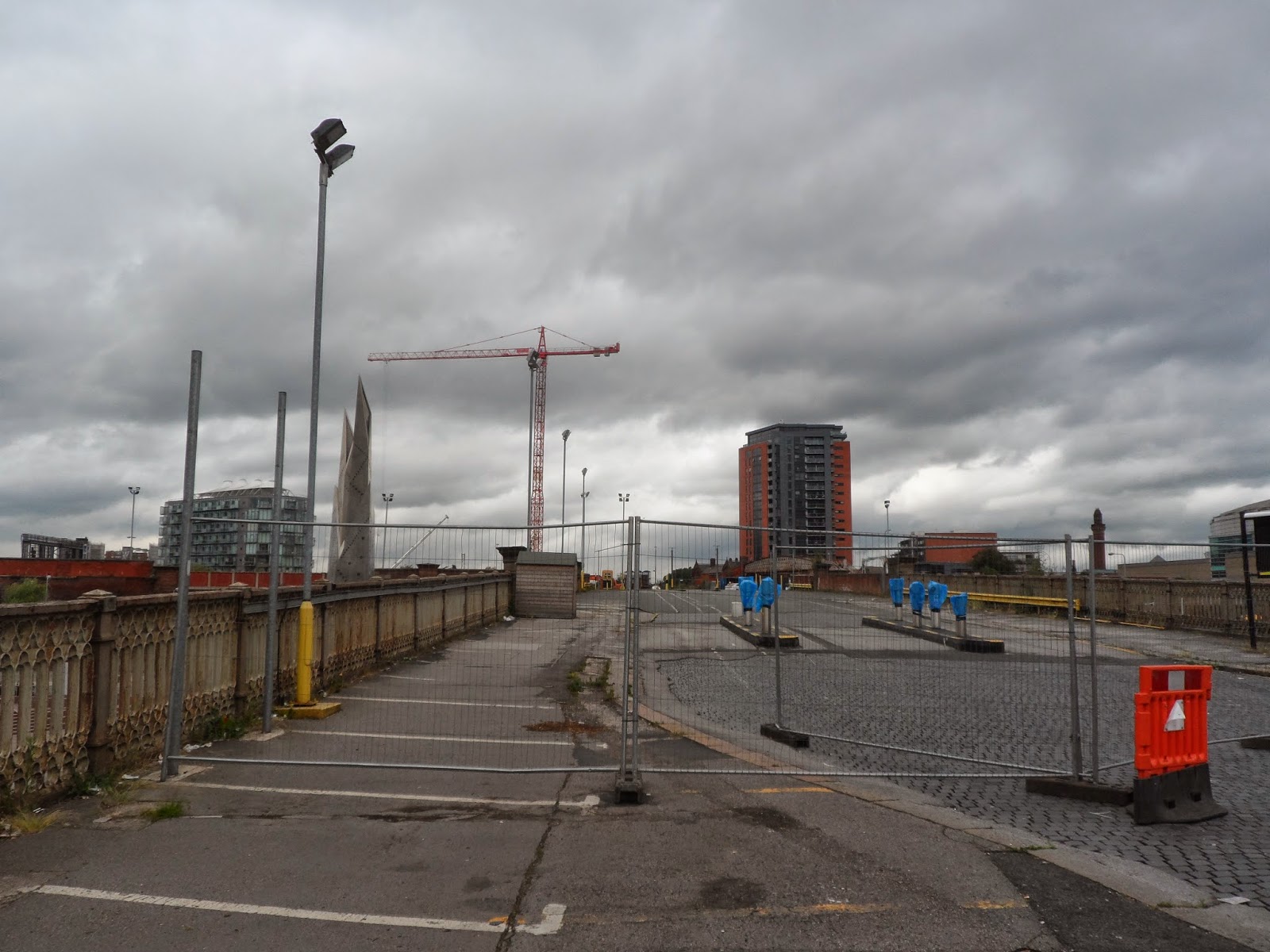 Forty odd years there had been a blot on the Manchester/Salford border - a space of empty undeveloped land.  Forty odd years.  And by the time I decide to go, they've fenced it off to form a new office development. 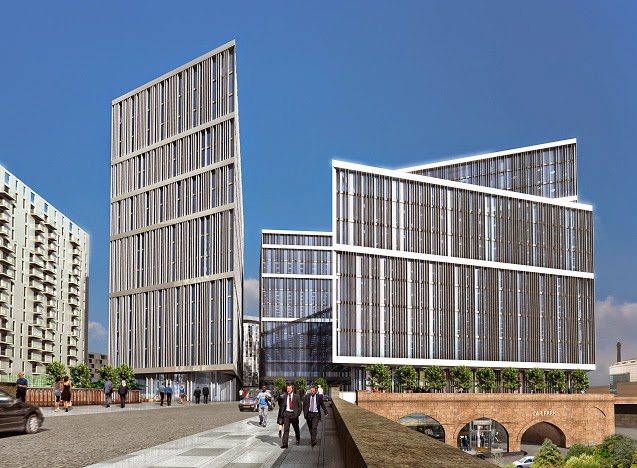 The Greengate Embankment development will see a series of incredibly dull office buildings plonked on top of the railway arches.  Look how boring that is - the CGI view is from more or less the same perspective as my shot, and I'm not sure which is the more tedious picture.

It meant I couldn't wander around looking at the remnants of the station building, so I plunged into the surrounding streets to find any relics I could. 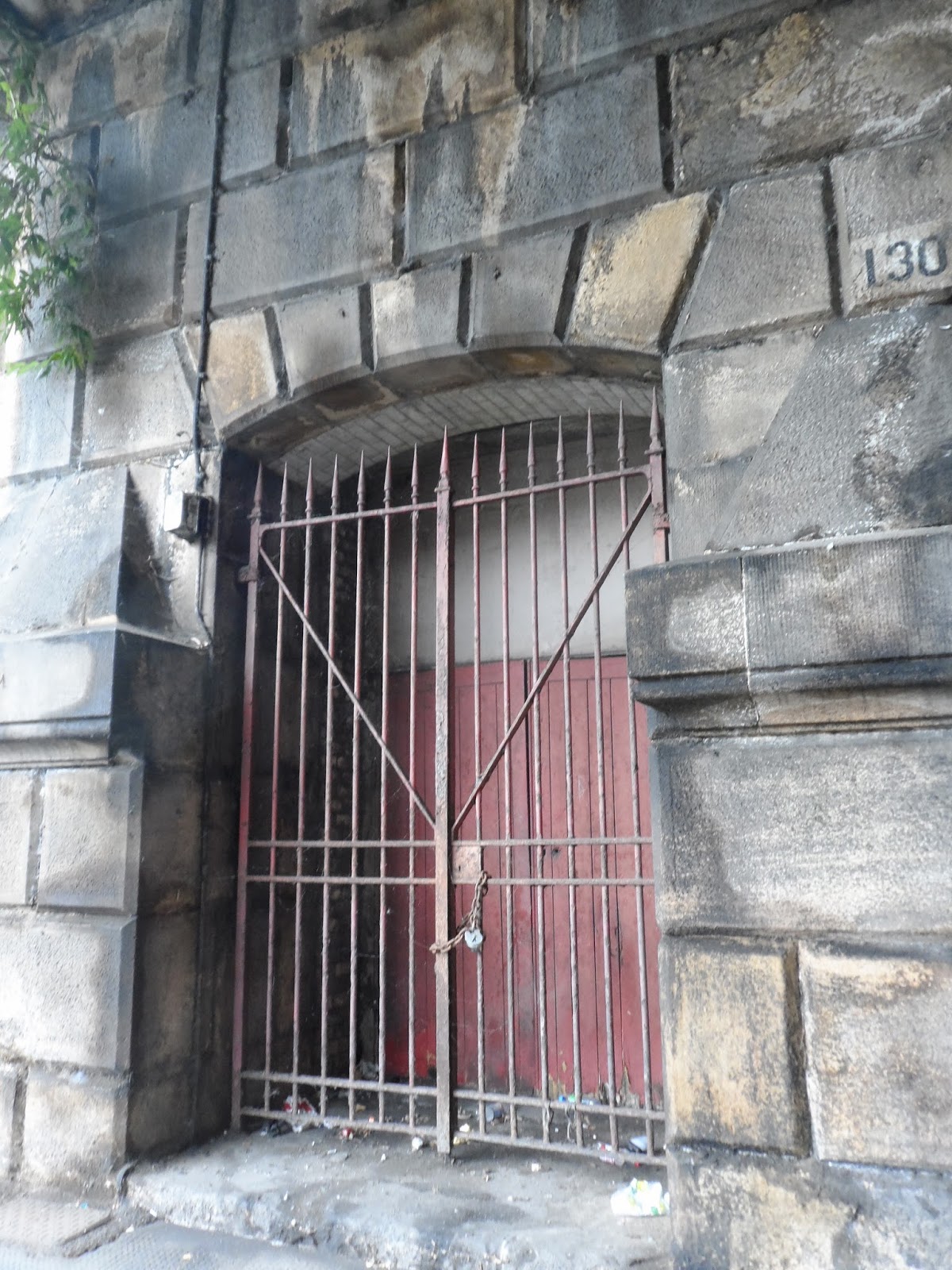 Huge arches carry the busy lines over the roads and into Victoria.  Their sheer size is almost romantic; you're dropped into an oppressive darkness here, within spitting distance of Selfridges and Harvey Nicks.  It's as though a cape has been swept across your field of vision. 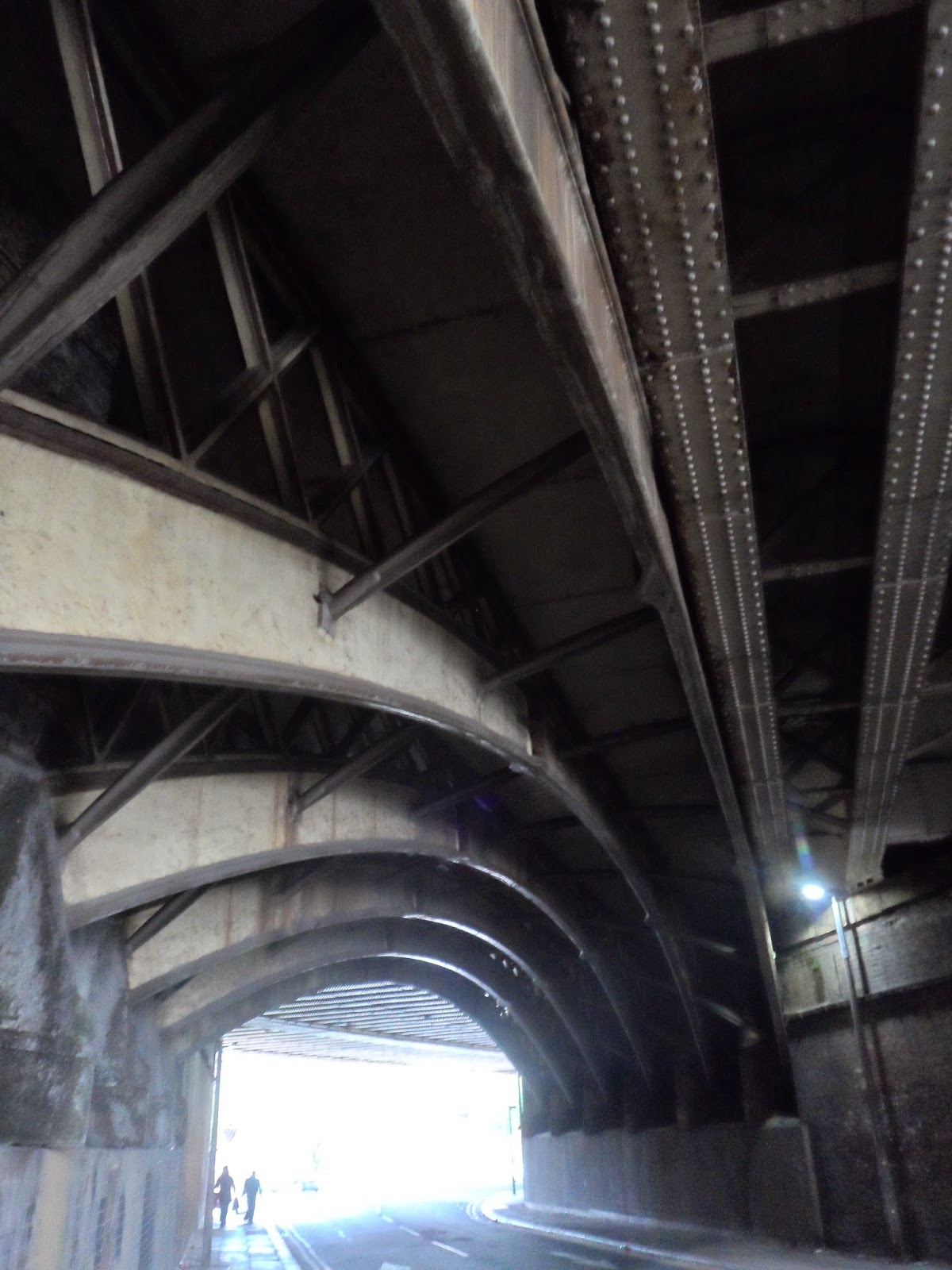 It also underlines how fragile the "Northern Renaissance" is.  Manchester's the poster boy for post-industrial recovery, but there were still patches of bare ground, empty units, individual developments yet to be knitted into the fabric of the city.  The fact that the Exchange site could stand empty for so long tells you a lot. 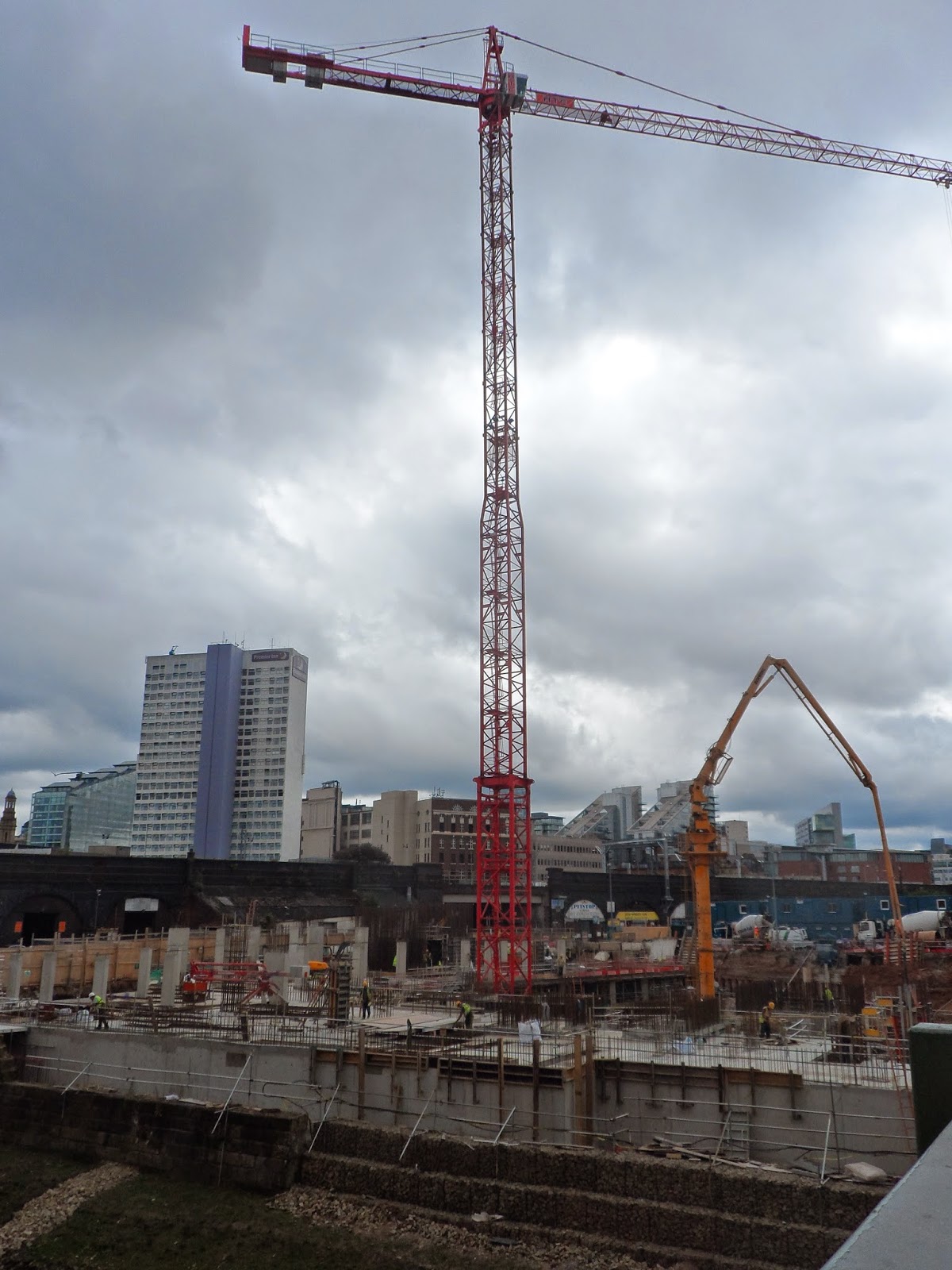 I walked around in a circle, increasingly frustrated at how temptingly close I was to having a poke around without actually managing it, until I was back outside the Cathedral again.  I then had a lucky break.  Off in the distance, over the railway tracks, I could see a bridge that I'd assumed was part of Victoria station.  However, there were a couple of rail enthusiasts on it, having a conversation with huge cameras in tow. 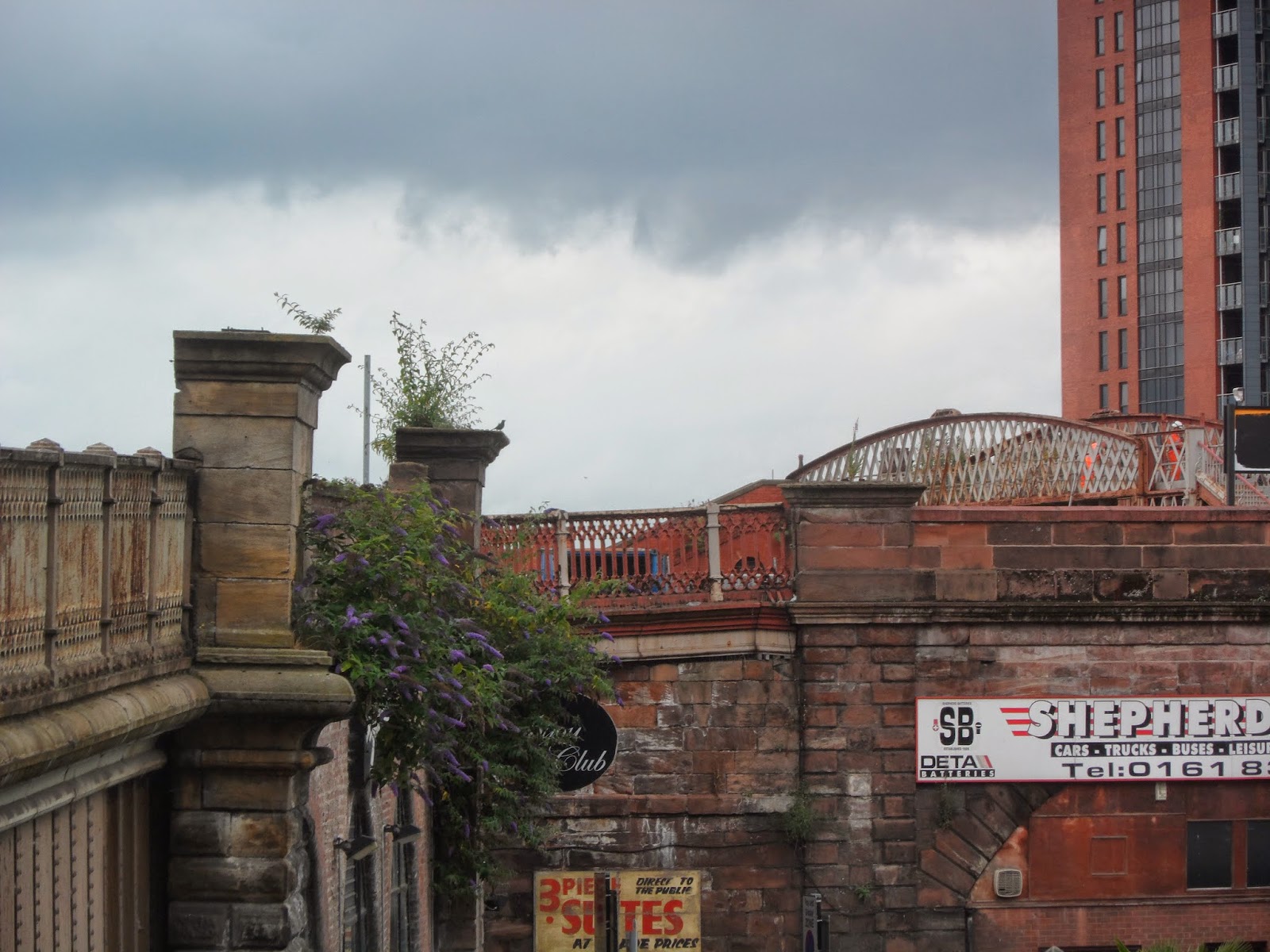 I knew for a fact that Victoria has ticket inspectors barring your way on the concourse, so unless these gentlemen had bought a platform ticket, that meant there must be a way to the bridge that didn't involve passing through the main station.  A bit of poking around and I found the entrance to the bridge behind an office block.  (So there you go: if you get into Victoria without a ticket you can sneak out the other end of the platform without being checked.  Sort this out, Northern). 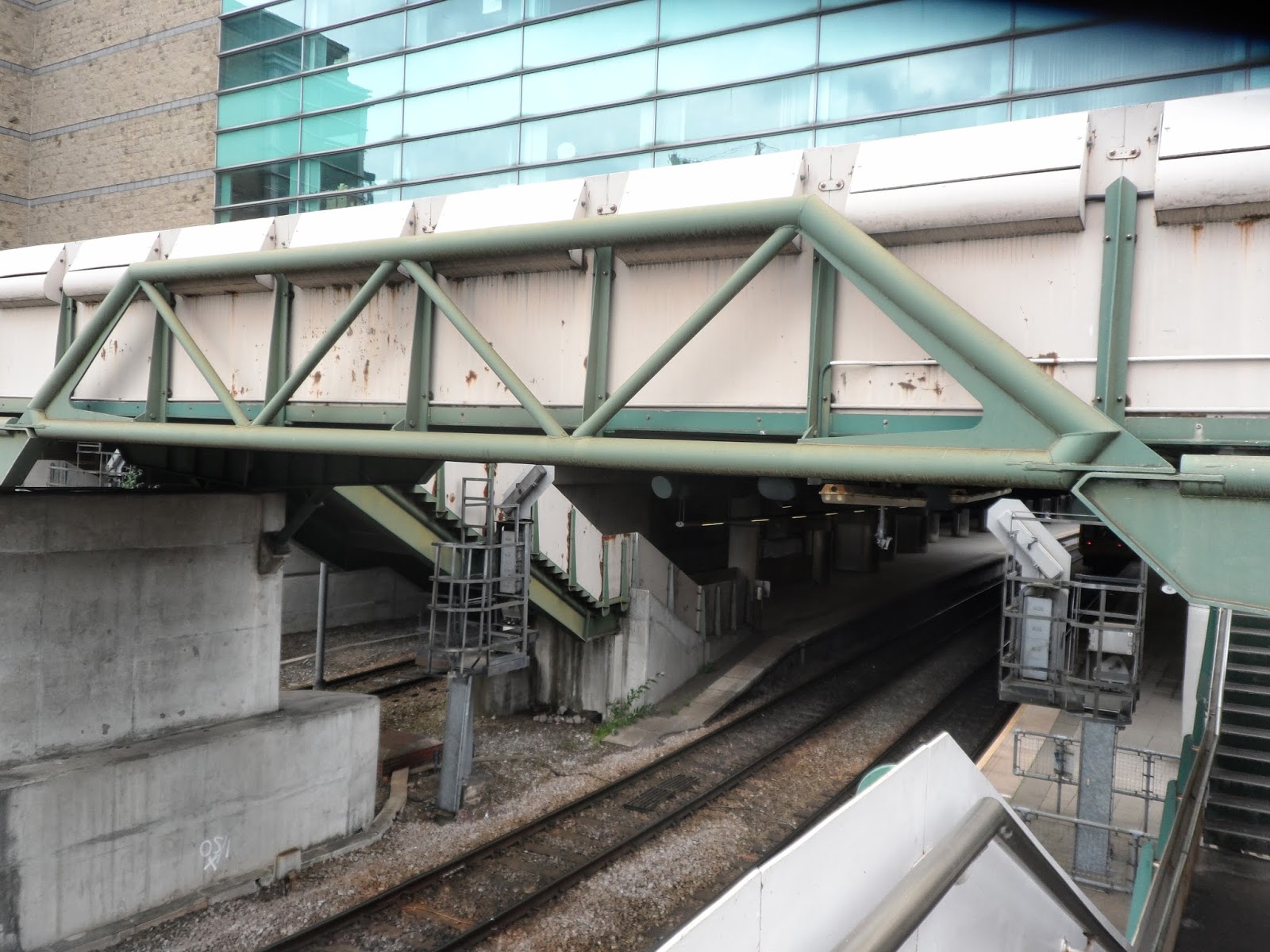 By the time I'd got up on top the men had disappeared; I'm choosing to believe that this is because they'd photographed all they needed to, and not because they'd seen me coming.  From the stairwell I was able to get a great view over the whole Exchange site. 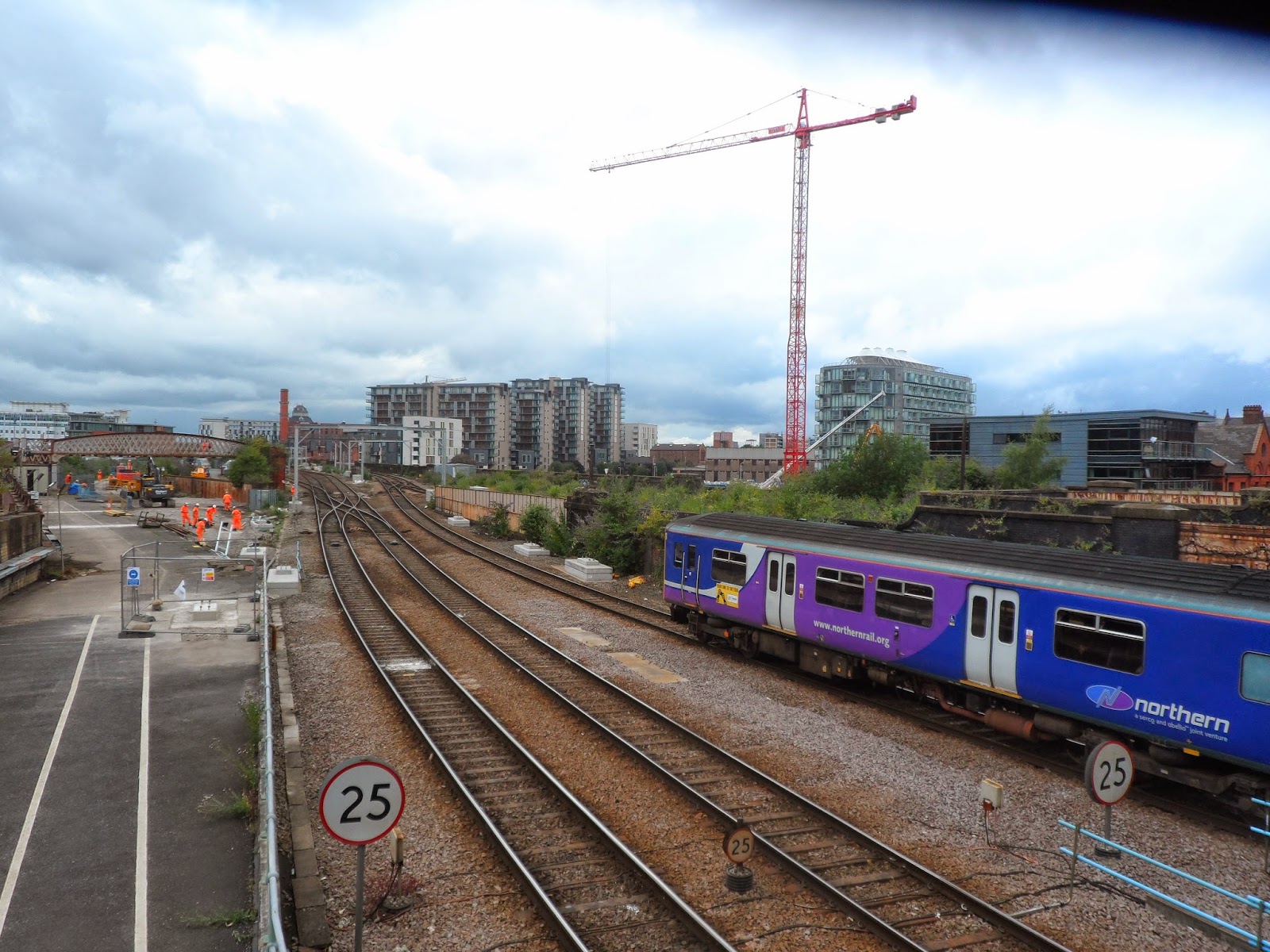 You can see the through lines to the right, and the older, unused space where the lines were on the left, now crawling with orange clad men.  The footbridge is original to the station as well.  Until the 1980s, the roof of Exchange still spanned the tracks, until someone realised that having an unmaintained structure over a busy transport corridor might not be a great idea and the whole thing was demolished. 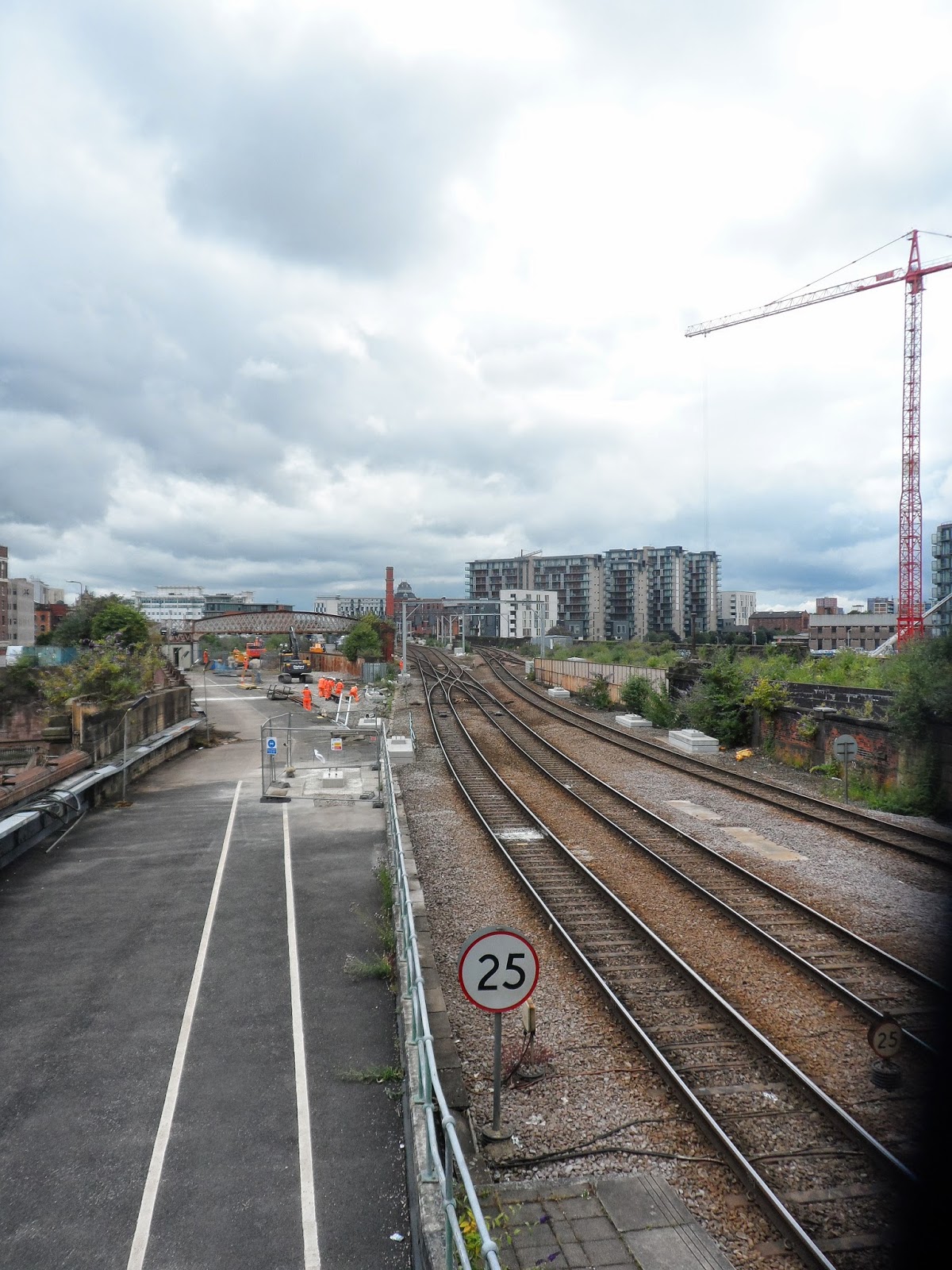 With my circumlocution of a dead station sadly thwarted, I headed to a semi-live one.  Victoria's currently in the process of being torn apart and rebuilt as part of the Northern Hub programme.  The idea is that Victoria will become Manchester's east-west station, while Piccadilly will be there for north-south services, and the Metrolink will carry you between the two.  Problem is, for many years, Victoria was a dump.  The MEN Arena (now the - sigh - Phones4U Arena) was built over the top of the tracks, making it dark and miserable, while the open side was allowed to quietly degenerate. 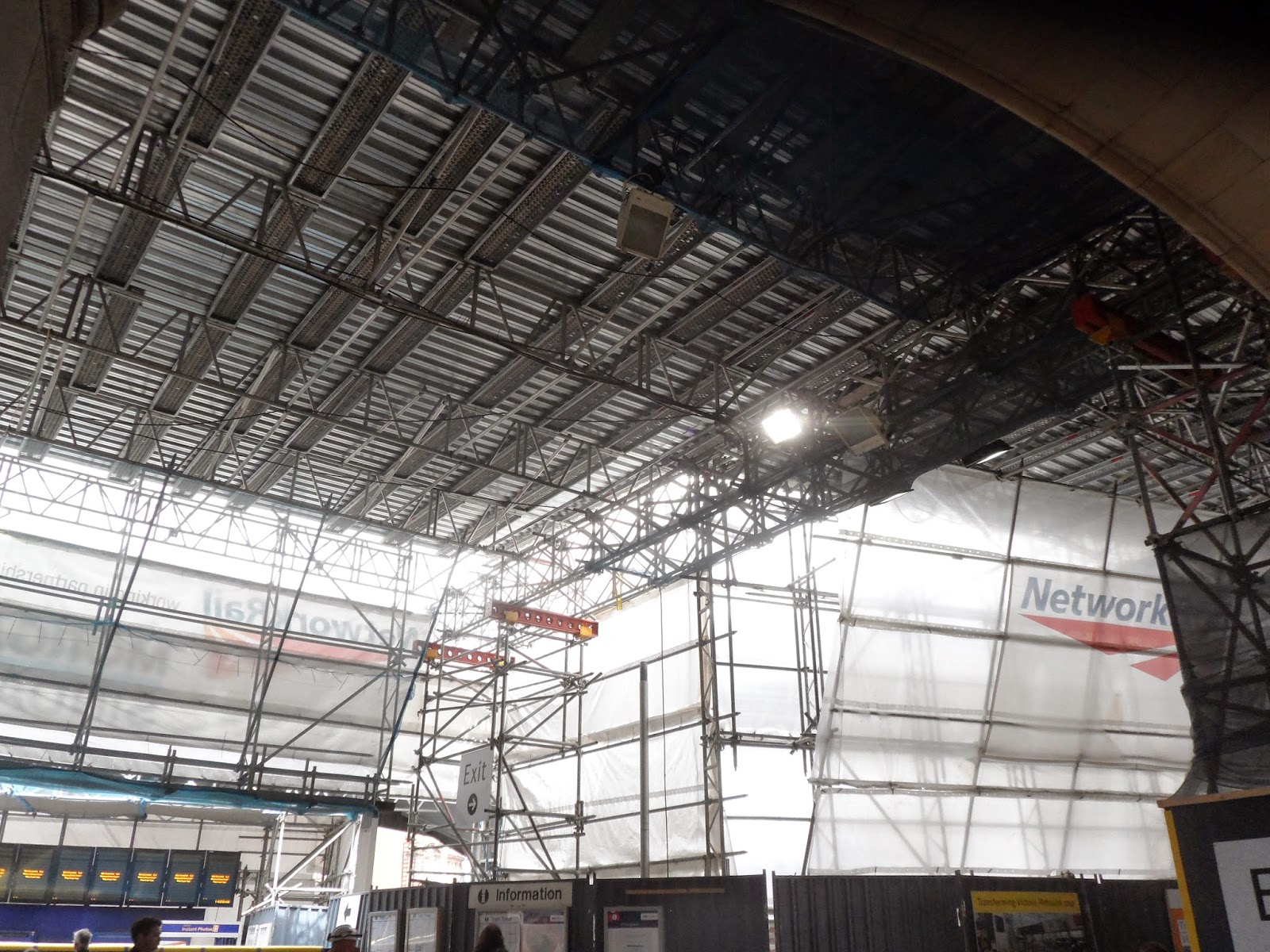 Now a whole new roof is being installed.  Vast white metal ribs are being erected over the concourse, and a clear PTFE roof will be installed between them to allow light to flood the space.  Meanwhile, the Metrolink platforms are being reconstructed, partly to accommodate the Second City Crossing (which will, incidentally, see Exchange reappear on the city's public transport maps with an Exchange Square tram stop). 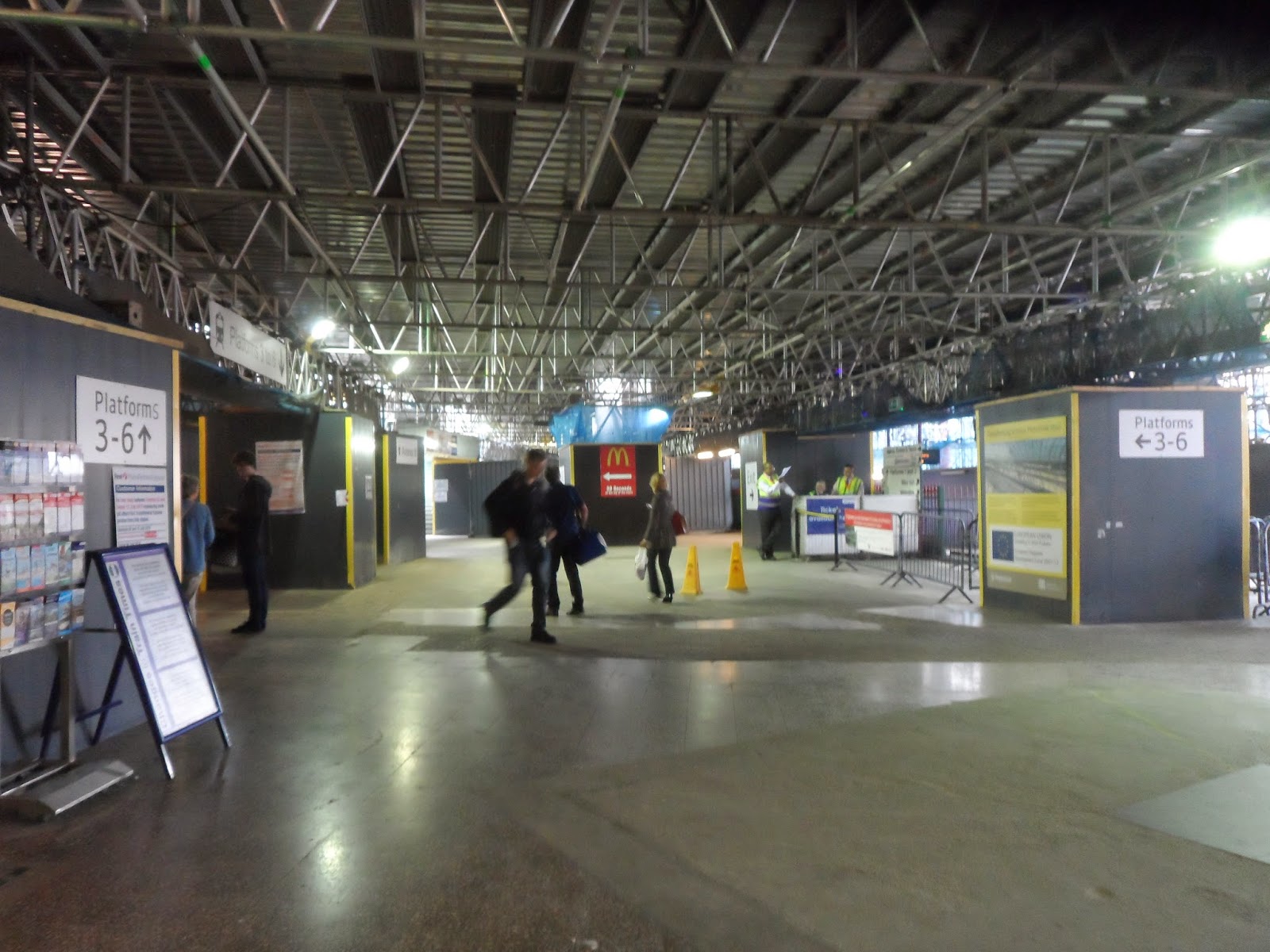 It's all very exciting, but right now, right here on the ground, it just looks a mess.  There are temporary signs and diversions and boards all over the place.  It was a bit disappointing, so I repaired to one place that has definitely improved from the redevelopment: the bar. 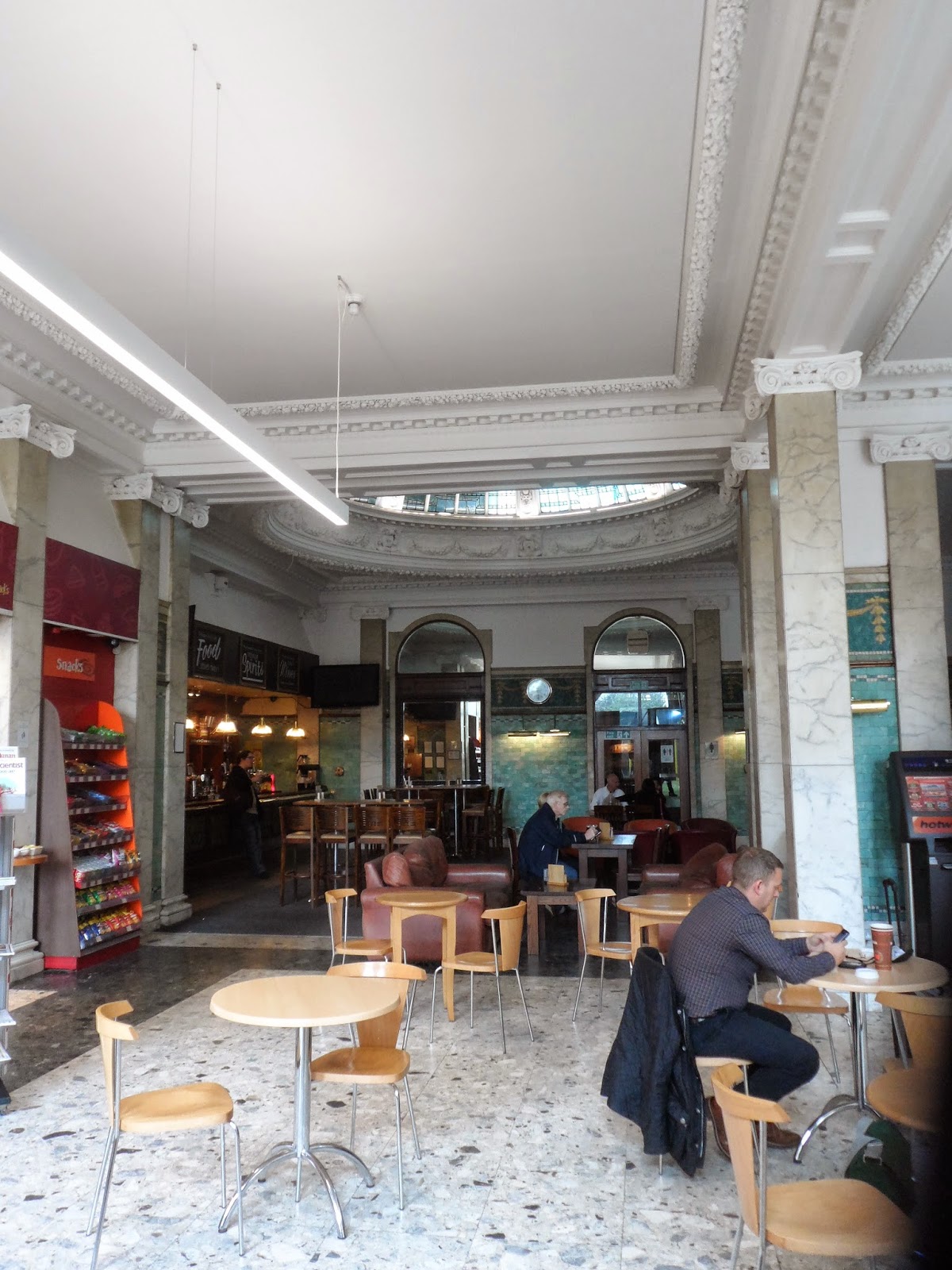 The heritage elements of Victoria have been restored, meaning that the refreshment rooms have been made over into something resembling their original state.  Obviously it's not perfect.  21st century retail demands corporate branding; so half the area is devoted the bright orange of Pumpkin, along with its balsa wood chairs and its tacky magazine racks. 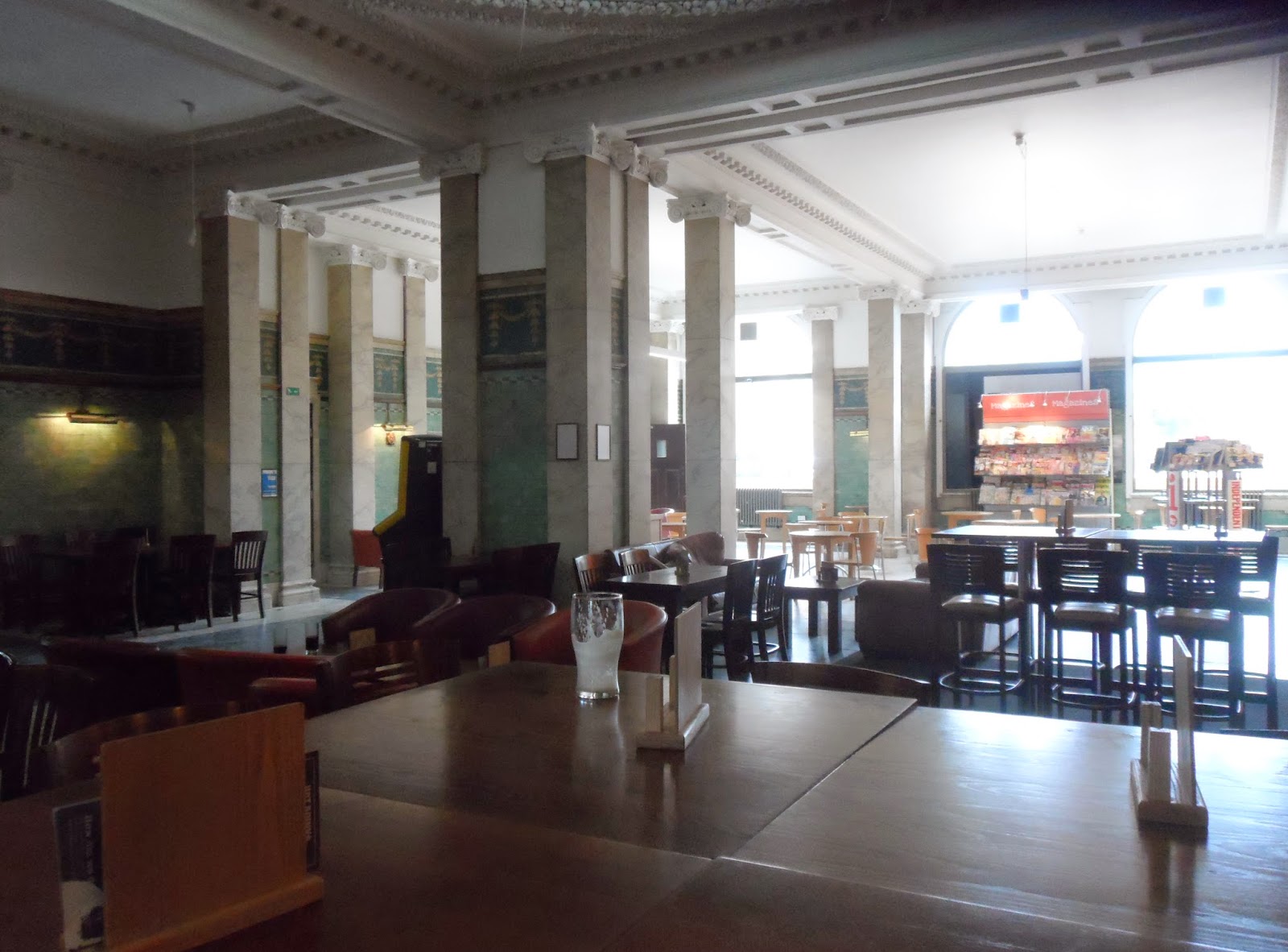 The bar side is altogether more successful.  It's a shame that station pubs have descended into this halfway house of "somewhere to kill time"; they used to be destinations.  They used to be stylish.  Now the Metro Bar was occupied by people having a Coke, without ice, because "the machine isn't working."  It's lucky it has that amazing dome in the roof to overawe you. 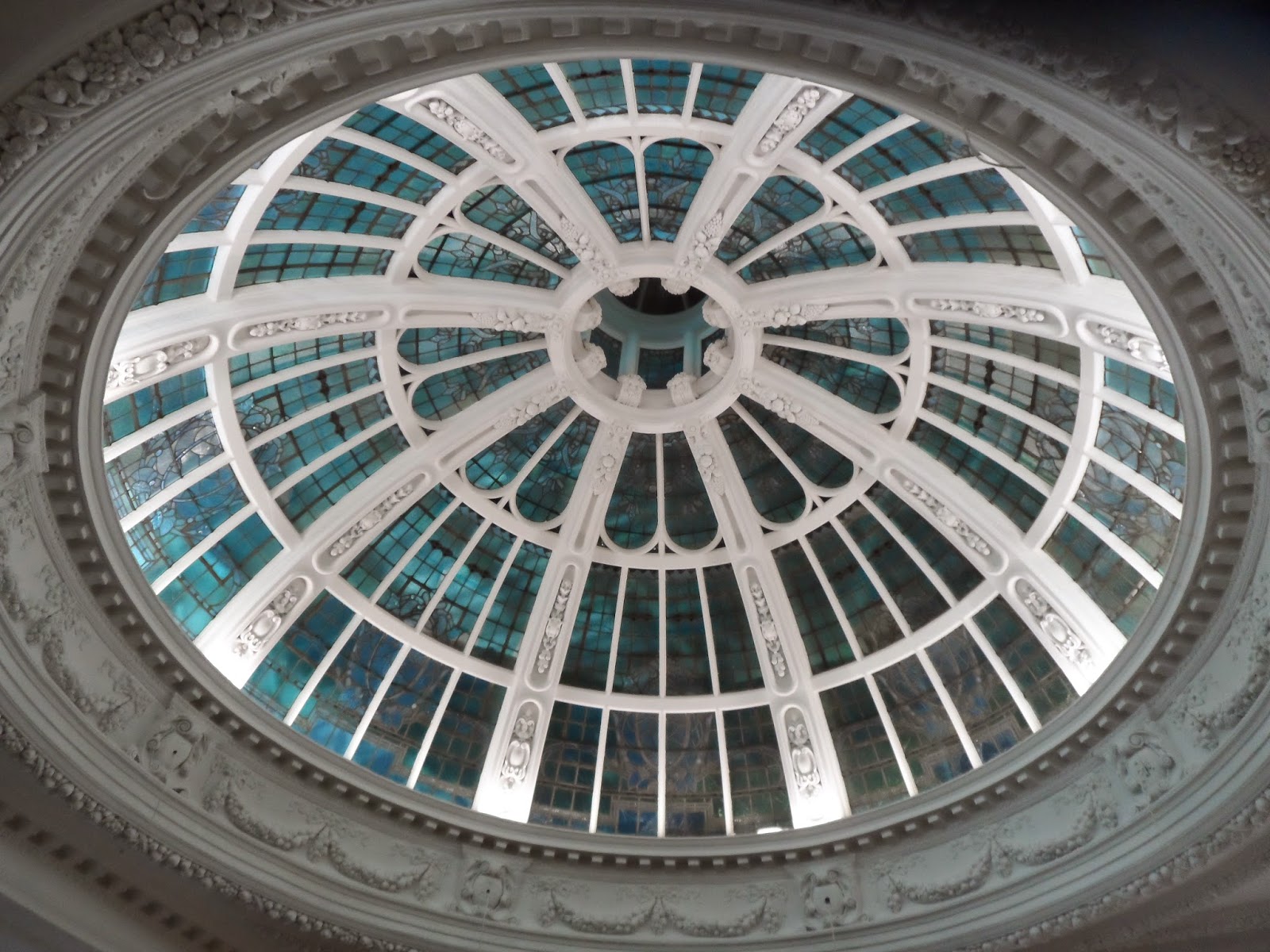 It was a frustrating afternoon, all told.  I didn't get enough history and I didn't get enough future.  It was like being in a really bad episode of Doctor Who; possibly one with Bonnie Langford.  In a year's time I'd see a whole new world but for now, it was just a whole load of maybes.